It’s hard to believe it today by looking at the Kyrgyz people but apparently many of them used to have red hair and blue or green eyes.

Ethnically, they were originally much more similar to their European neighbours to the west than those to the east. It wasn’t until later, perhaps partly because of the spread of the Mongols by Genghis Khan, that Kyrgyz people started to also have Asian features.

At least… this is a story that several people tell me during my time in Kyrgyzstan.

It seems to have some foundations in historical documents but there’s not a lot of evidence either way whether this Central Asian country was actually once full of redheads, flashing bright blue and green eyes. 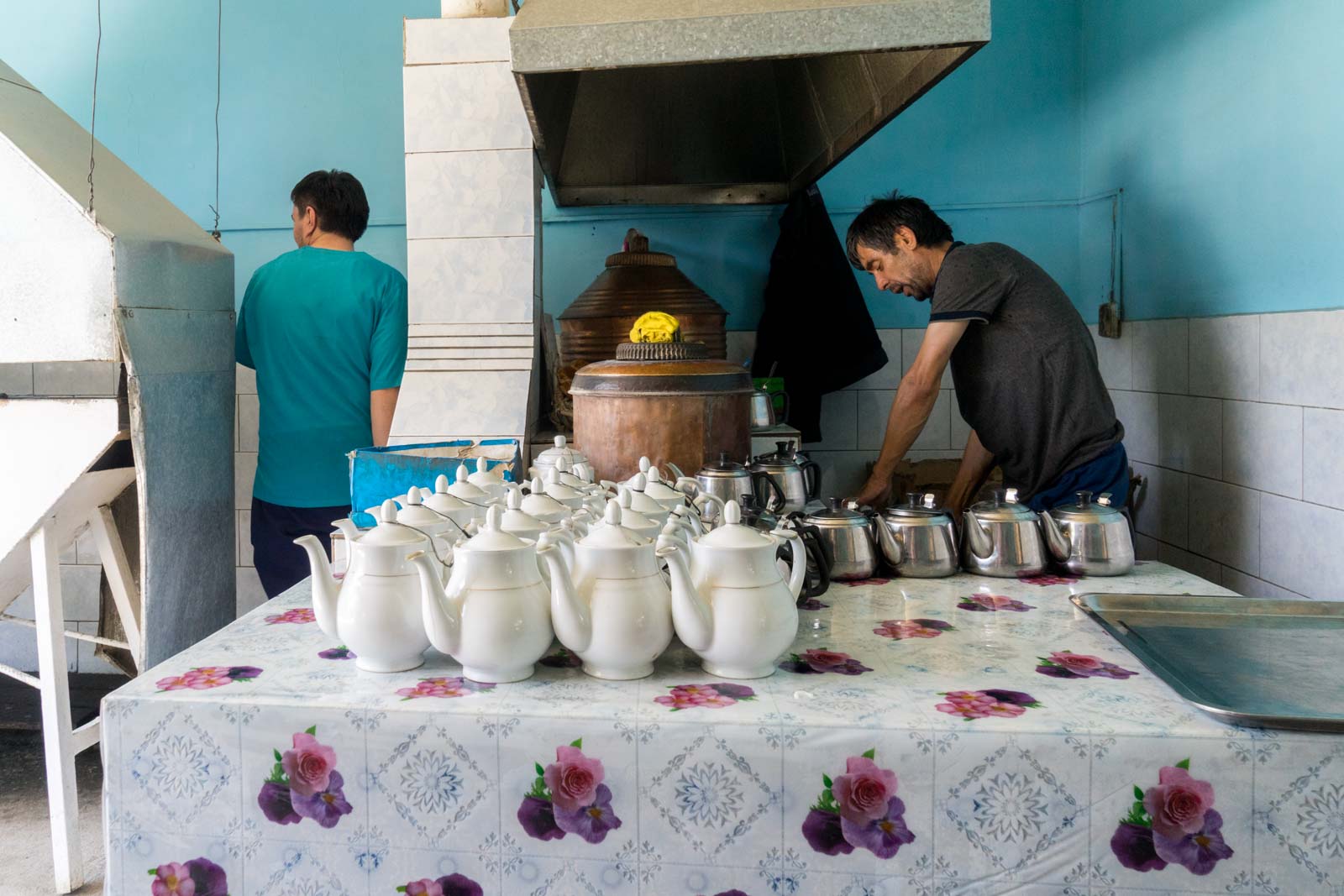 What is without doubt, though, is that there have been influences from all sides of land-locked Kyrgyzstan over the millennia. What you get these days is a mixture of it all.

You see it in the faces of the citizens… but you also find it in the food! And that’s what I want to tell you about today, focusing on the second-largest city in Kyrgyzstan, Osh.

Like many of the large markets in Central Asia, the Jayma Bazaar in the city of Osh seems endless. As you walk through it, you sometimes wonder if you’ll ever find your way out. It seems to have an infinite amount of stalls, selling everything and anything you could possibly think of.

There have been vendors at Kyrgyzstan’s Jayma Bazaar selling their wares for more than 2000 years. It’s one of the region’s oldest marketplaces and the items that people have come to buy have obviously changed over the centuries. 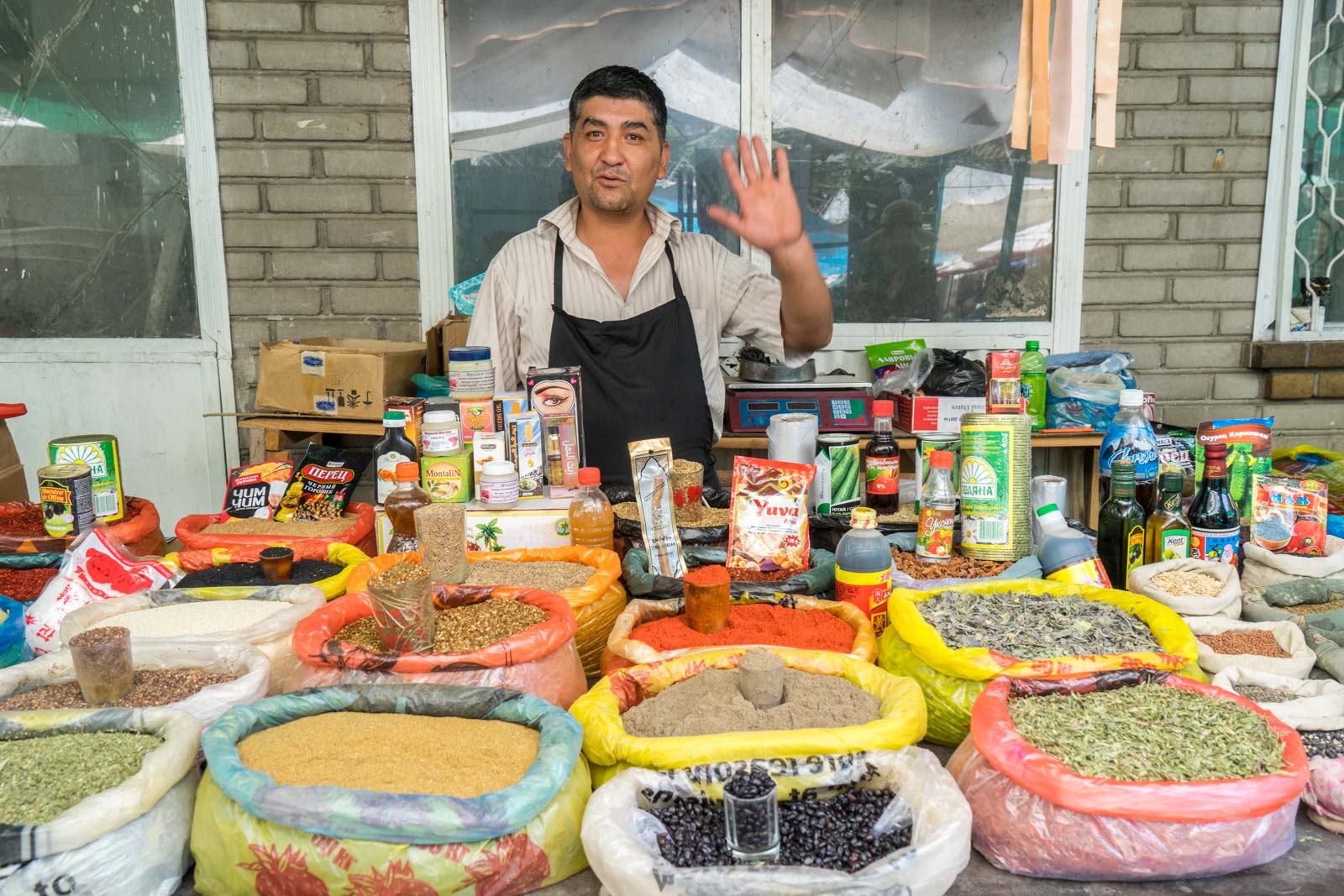 As you explore Osh, I would highly recommend you spend some time at the Jayma Bazaar and have a look around the food section, and maybe even ask to taste a few things. You’ll find some fruits, spices, nuts and sweets you’ve probably never seen before. 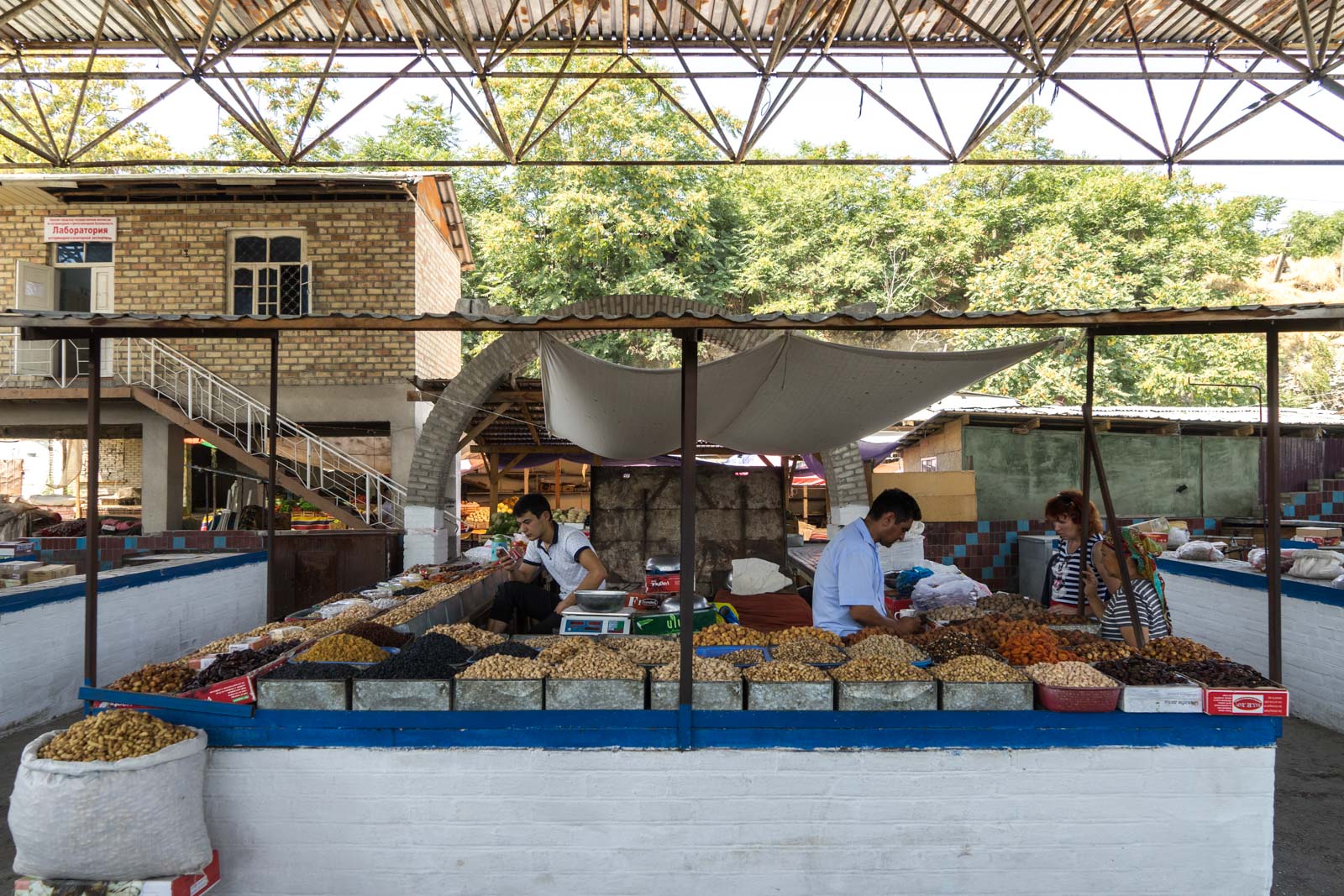 To help you navigate the bazaar, you can use this map.

In general, the traditional food of Kyrgyzstan has been developed through necessity. For centuries, much of the population was nomadic, travelling with their animals between the best pastures.

The food they would eat would be determined by which animals they had – in the majority of cases, these were horses, cows, and sheep.

So, most of Kyrgyz cuisine is heavy on meat and dairy. With the meat, it was often prepared in a way that could make it last a few days, in case a family was on the move.

The meals usually were based around dough, rather than rice, because this would also last longer once cooked. 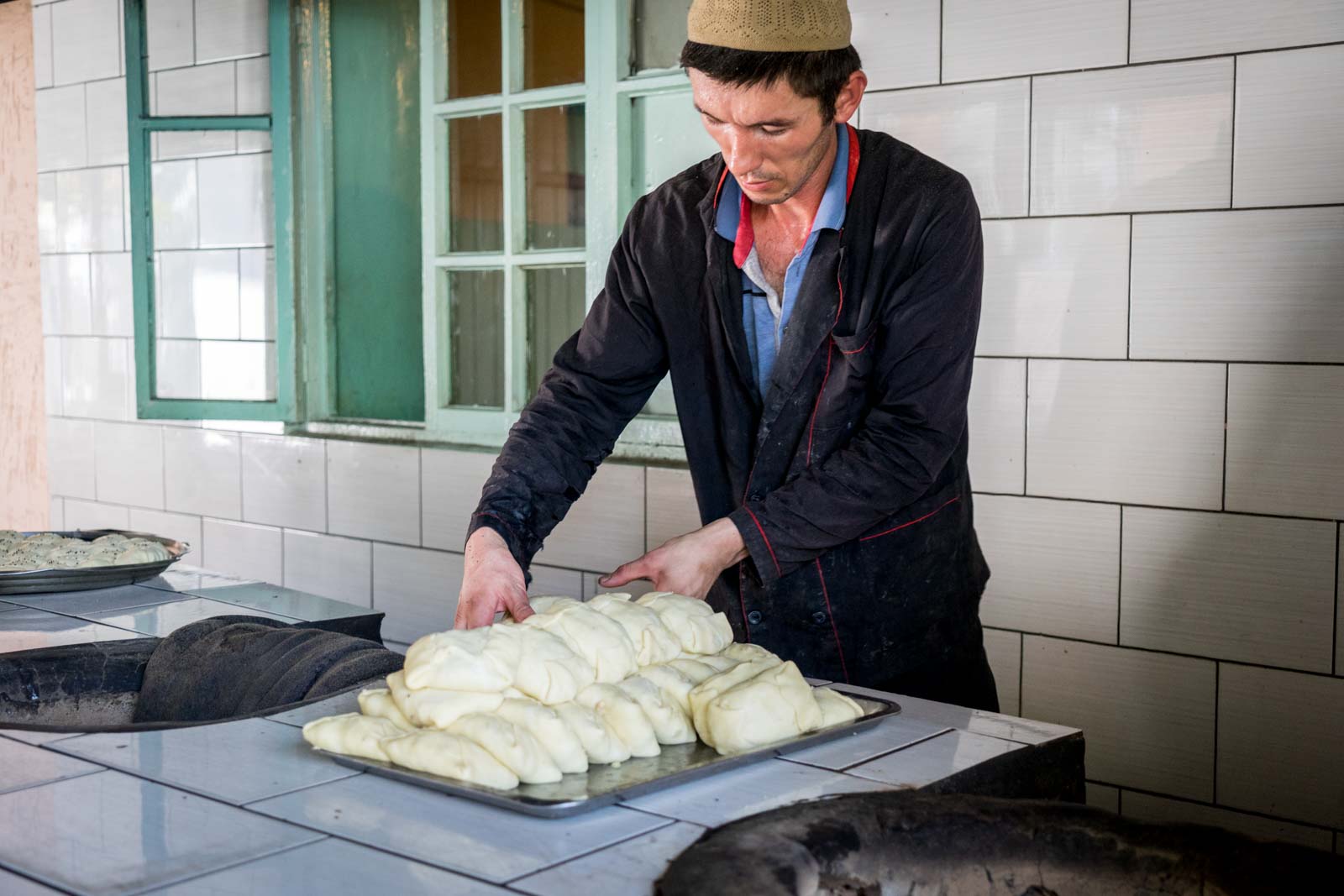 Over the years, though, influences from Asia became more common – such as rice and dumplings. And grilling meat, rather than boiling it, was introduce from other Turkic countries. Spices also became more widespread.

In Osh, you can see all of this play out with a great food tour that will take you to some of the best spots around town to try different dishes.

For example, you’ll be introduced to ‘maida manty’. These are small dumpling-style packages that are almost more like ravioli.

The dough is made with flour and the most common filling is potato. You can also get slightly larger ones with meat inside that are just called ‘manty’. 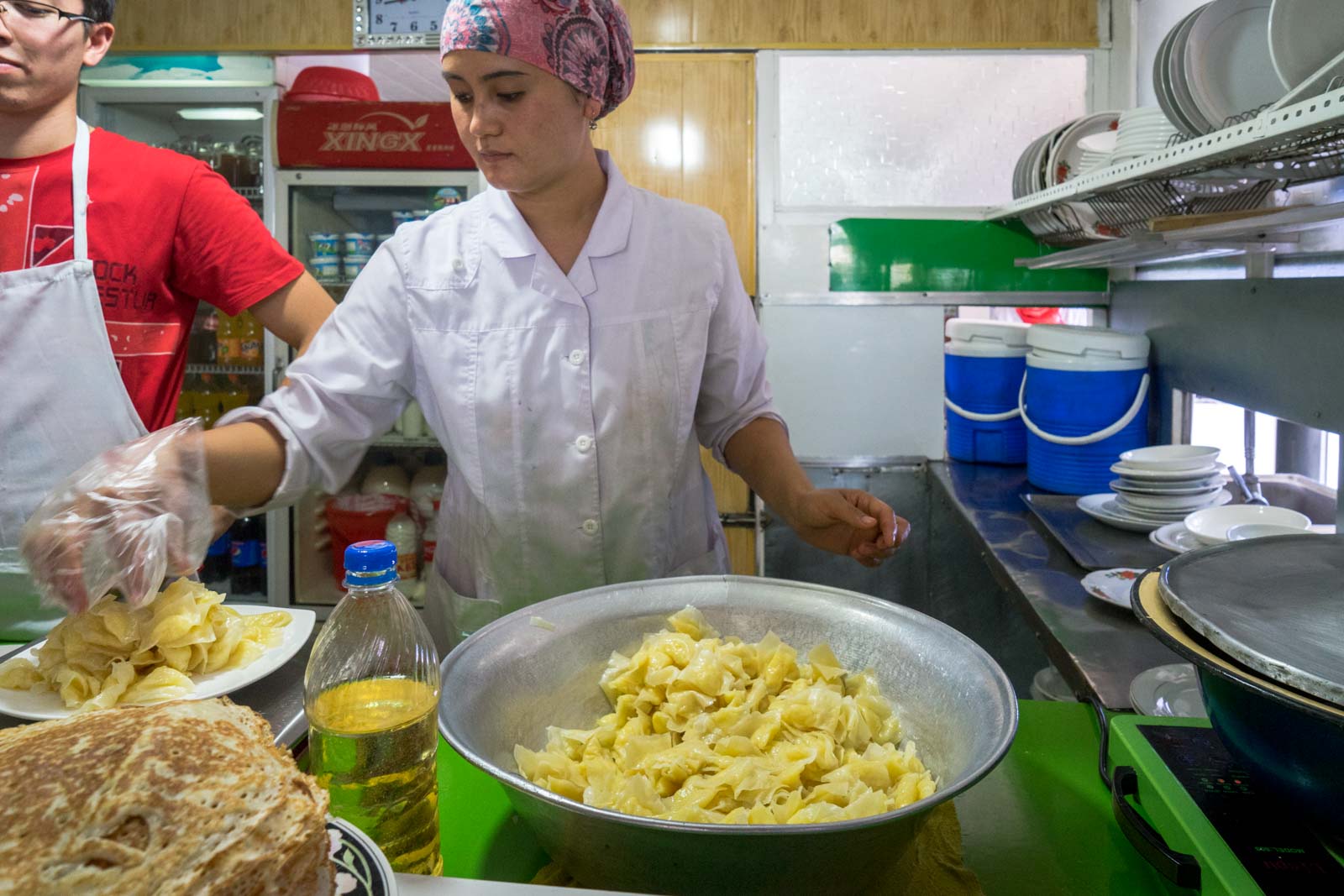 You’ll also find a very traditional type of food called ‘samsa’. These are bread pockets that are filled with meat before they’re cooked.

It’s impressive to see them being made because someone leans in and sticks them to the inside wall of a clay oven to cook them! 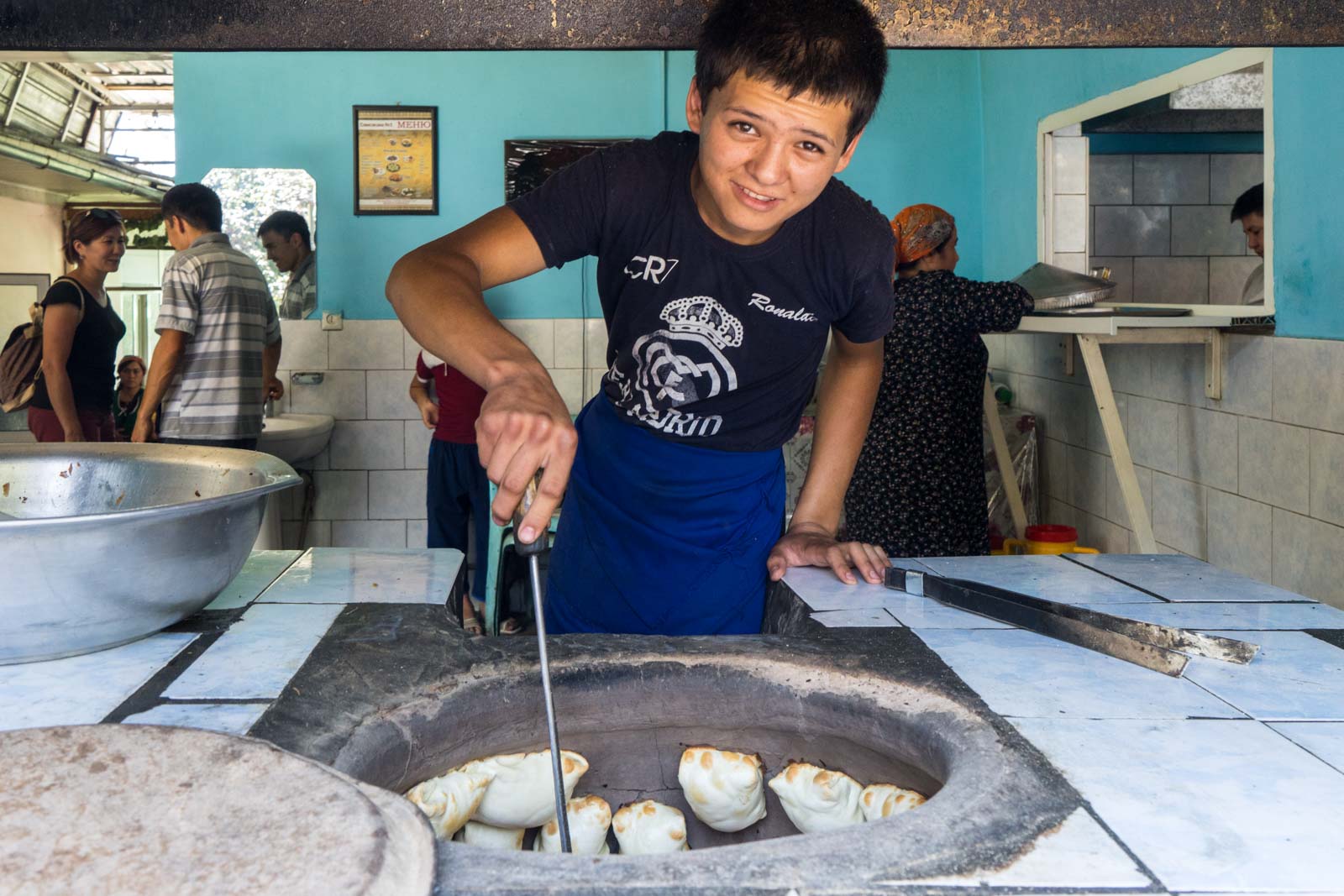 And there’s also the ‘shashlik’, which are skewers of meat cooked over hot coals. Usually it is also served with flavoured but uncooked onion on the side. 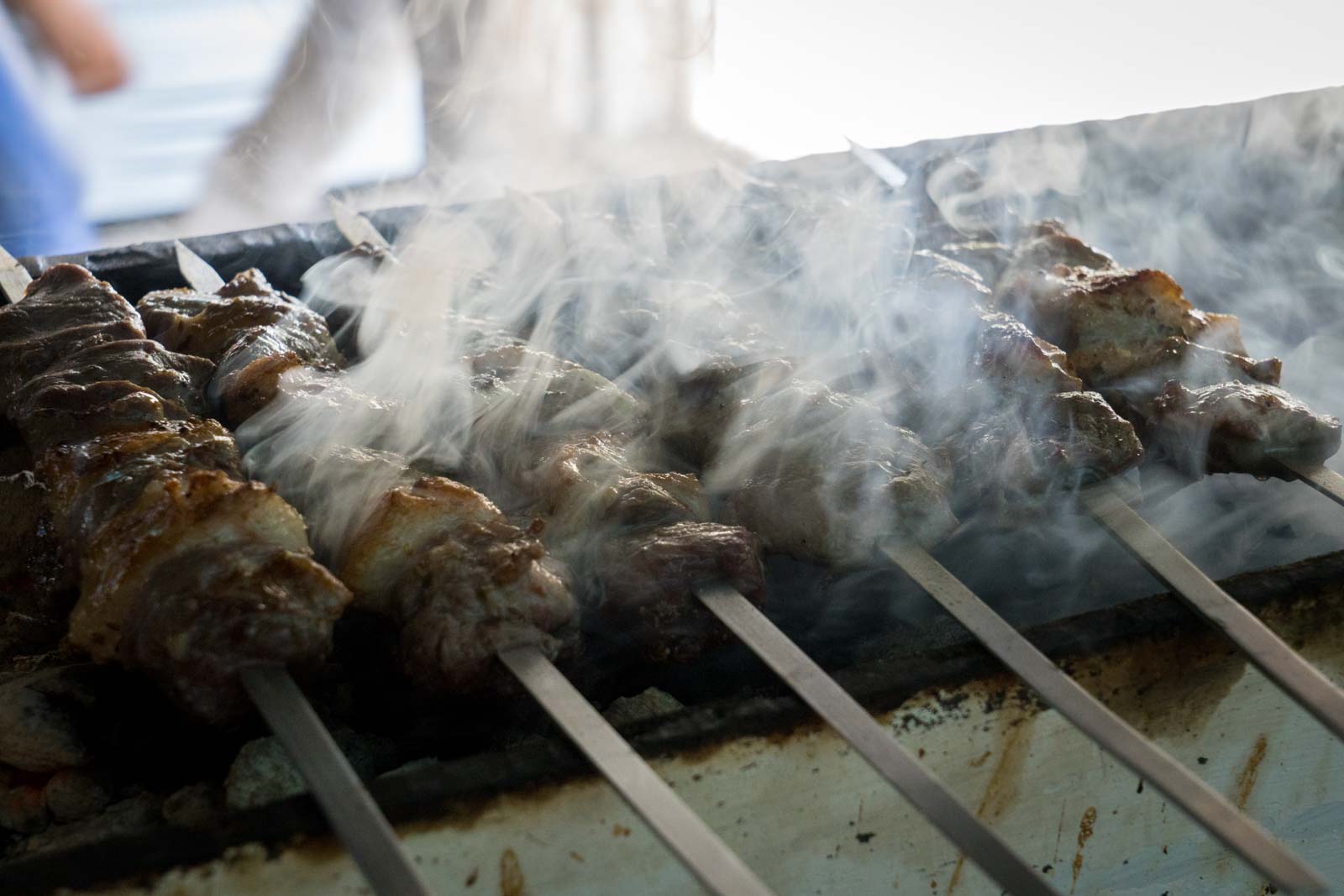 As I’ve mentioned – and you have probably gathered by now anyway – dough is very important in Kyrgyz cuisine.

Dough is used in maida manty and it’s used in samsa. It’s used in dozens of other ways in traditional cooking.

But there’s one thing it’s used for that is on the table almost every single meal – bread. 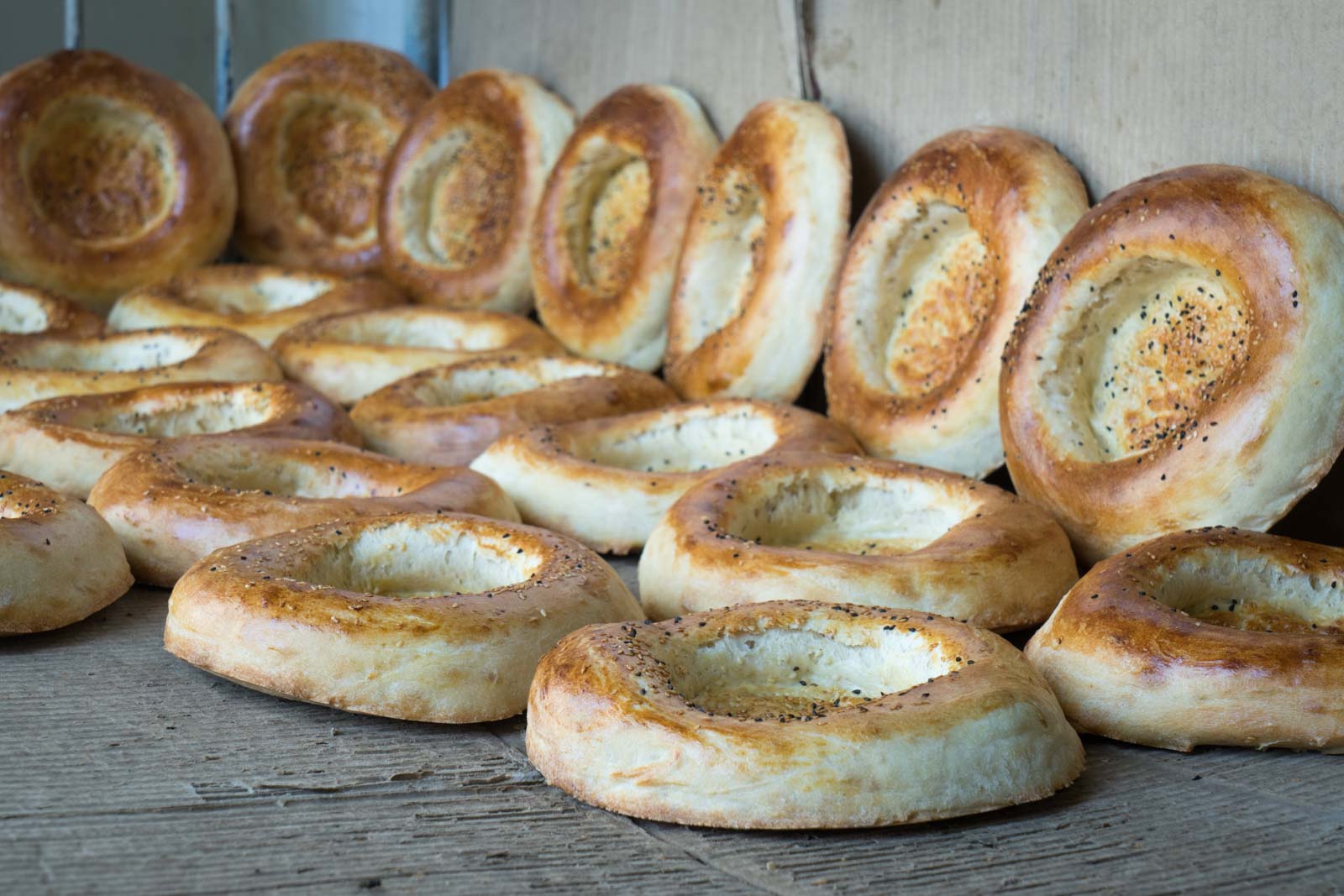 Every time you sit down to eat, you’ll normally get some bread placed next to you. The normal type of bread is a big circular loaf that is thicker on the edge and thinner in the centre.

One of the other really interesting experiences you can have in Osh is to learn how to make this bread yourself.

It’s not done in factories or even large bakeries. It’s usually done at a tiny neighbourhood shop so it can be sold quickly to local people who want it fresh – or even hot. 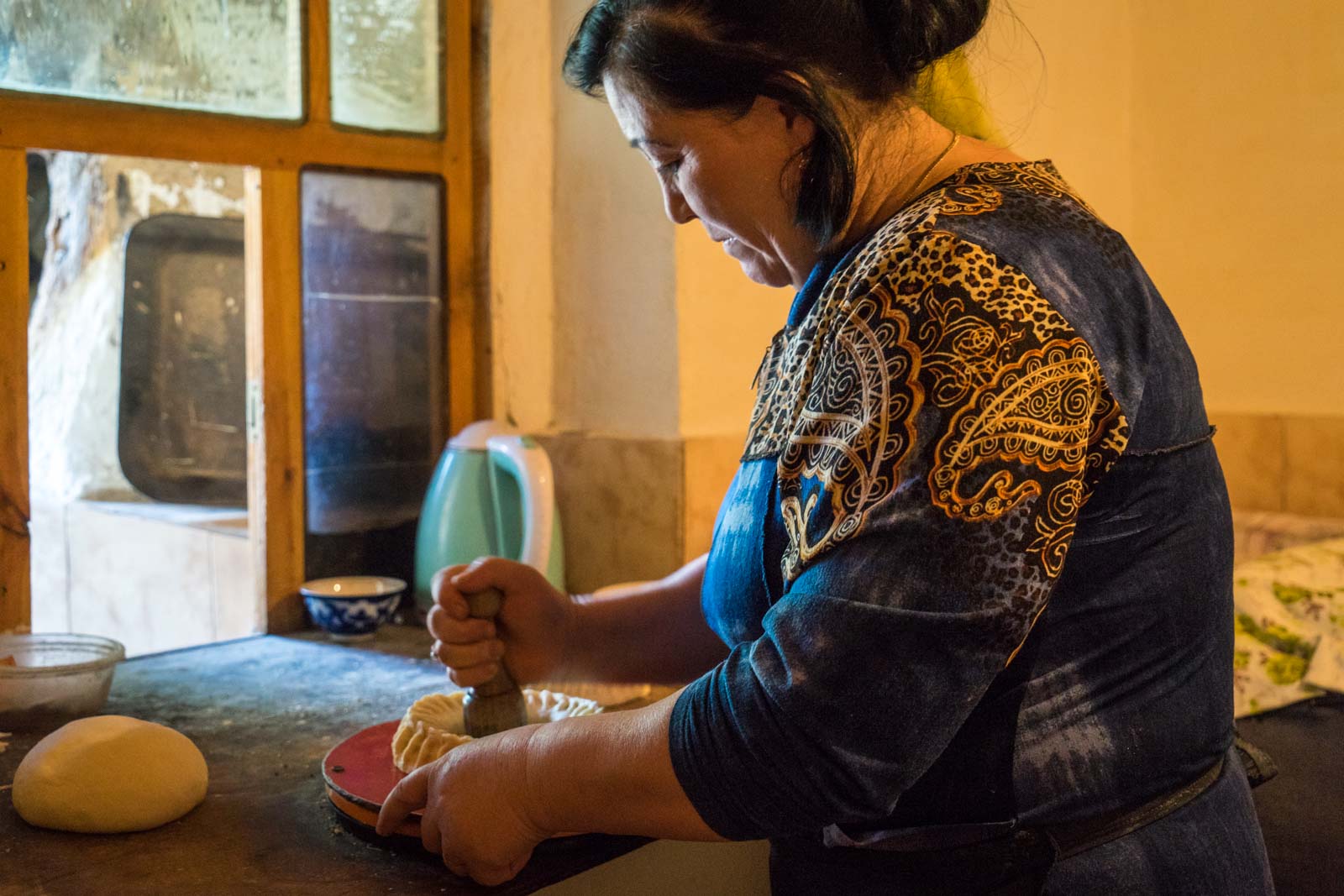 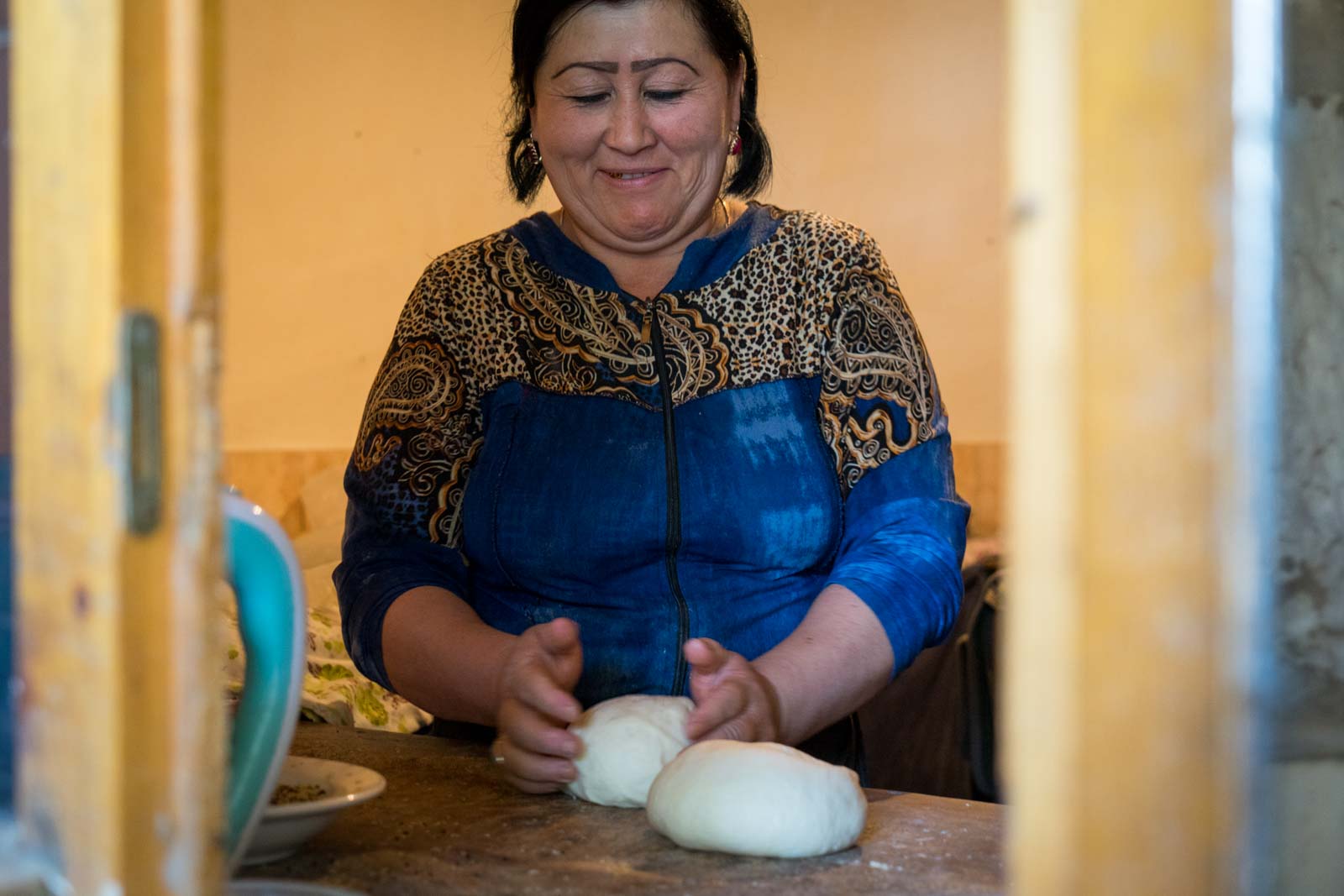 With this bread-making experience, you’ll go to one of these small shops and get a fantastic hands-on lesson.

There’s one other really important dish that I want to tell you about – and it doesn’t involve dough. In fact, it’s all based around rice.

The dish is called ‘plov’ and it’s been a staple meal in Central Asia for a long time.

The basics of plov are that you make a hearty stew of meat and vegetables and then you simmer this stew to cook the rice in it. What you end up with is a rich meal full of all the important food groups! 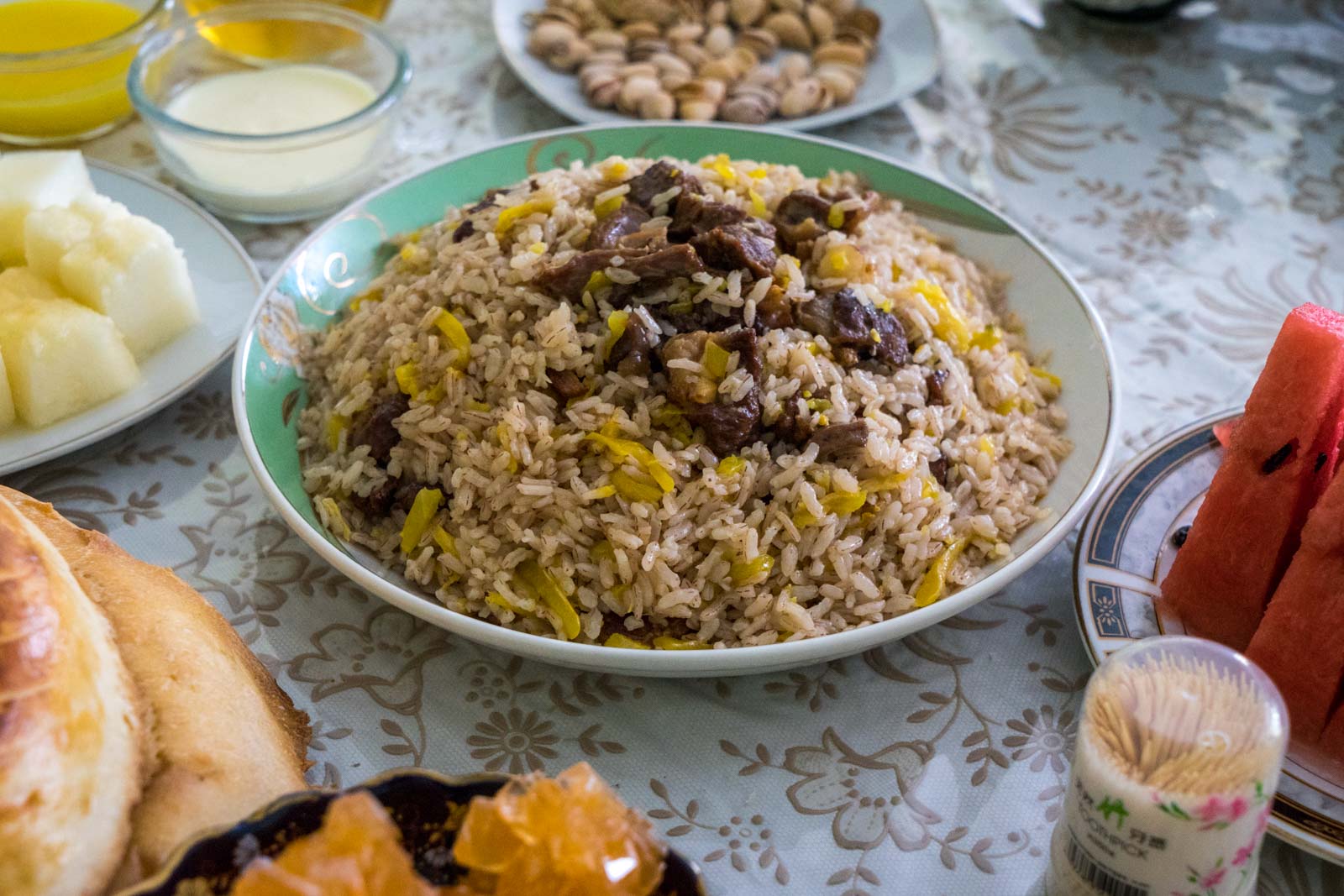 There are similar dishes all around the world – not surprisingly, seeing as it’s relatively easy to make and tastes good and is healthy. You may have previously come across something that seems a bit the same called ‘pilaf’ or ‘pilau’.

However, there are some unique characteristics to the plov made in Kyrgyzstan and they are directly related to the traditional lifestyles here.

You can do a Plov Journey in Osh and that’s a great way to learn more about the dish and have a great meal. You can also have a special plov meal in the nearby city of Uzgen, if you’re thinking of going there to see some of the sights. 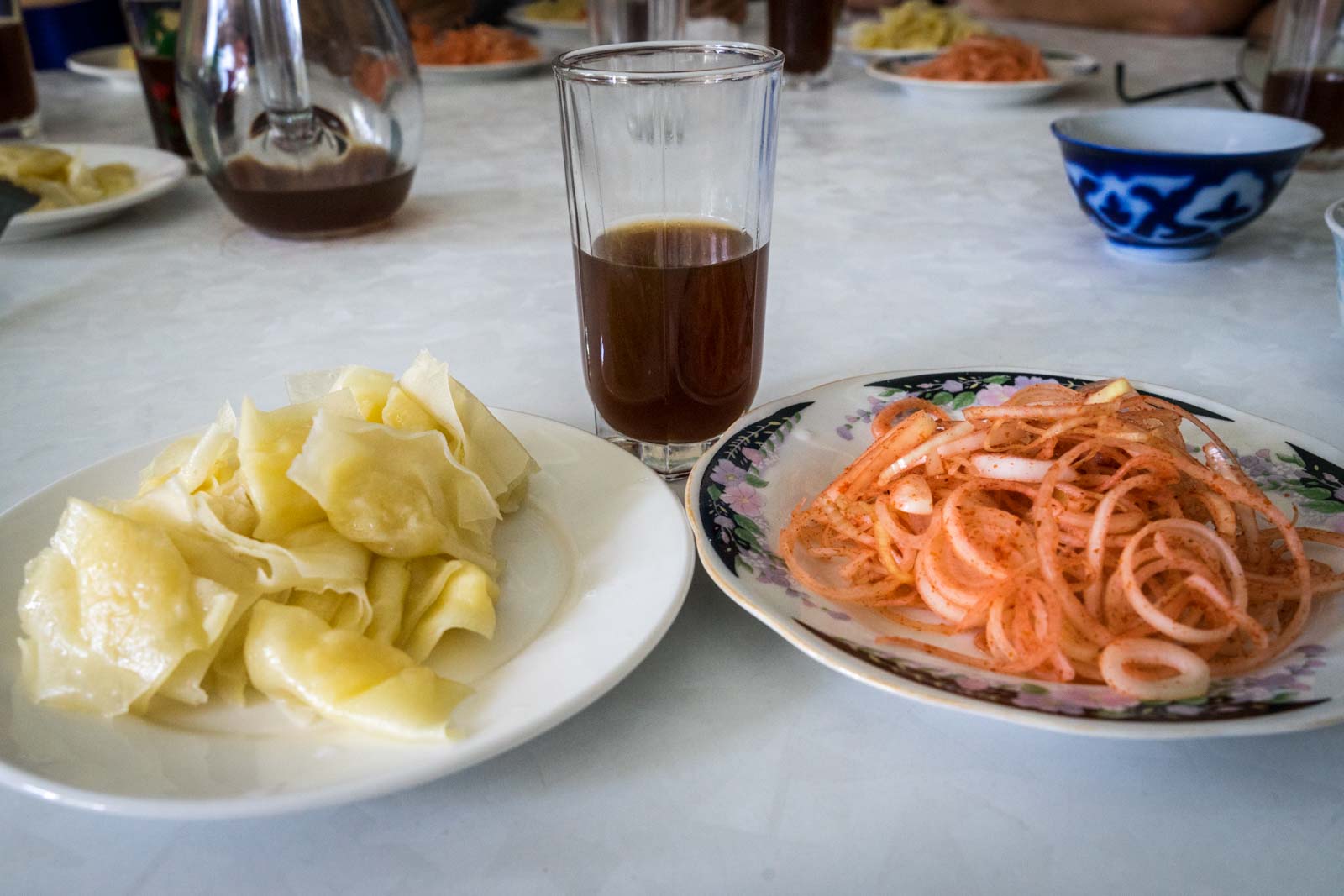 Ultimately, you won’t be able to avoid the food of Kyrgyzstan – and that’s a good thing. I loved all the meals I had in the country and it made my time travelling through Kyrgyzstan even more enjoyable.

They are hearty, they are healthy, and they taste good.

I guess that’s what you get when you can pick and choose the best aspects of so many neighbouring cuisines.