Firstly, thank you for being so patient with all my posts from Myanmar over the past few weeks. I know there were a lot of them but I have felt quite inspired to share all the wonderful experiences I’ve had.

Also, it’s a country that does not have the same awareness as many of its more popular South East Asian neighbours and I feel like there’s been a genuine interest from everyone who reads Time Travel Turtle – so thank you very much for that.

For my final post (yes, you can breathe a sigh of relief, it’s come to an end), I wanted to publish a collection of photos that didn’t fit in anywhere else.

I rarely take the camera off automatic because I work on the assumption the tiny processor in the camera is smarter than I am.

(Also I don’t know what all the little images on the knob are… is the icon of the running man with no feet only for taking photos of South African crime scenes?)

And I also do a bit of touching-up on the computer to hide the fact I didn’t pay attention to where the light source was.

So, that all being said, I hope you’ve enjoyed coming along on the journey through Myanmar. Please let me know if you’re ever planning to head there yourself because I would love to hear all about your impressions.

And now, here are the rest of the photographs:

Religion permeates through almost everything people do in Myanmar and it’s impossible to avoid. 90 per cent of the population is Buddhist and it dominates the infrastructure.

Quite often the main ‘sights’ in a town are the pagodas and temples – not just because the Myanmar people put such an emphasis on them but because they are beautifully-built and elaborately-decorated.

The most famous is the Shwedagon Pagoda… but there are many more. 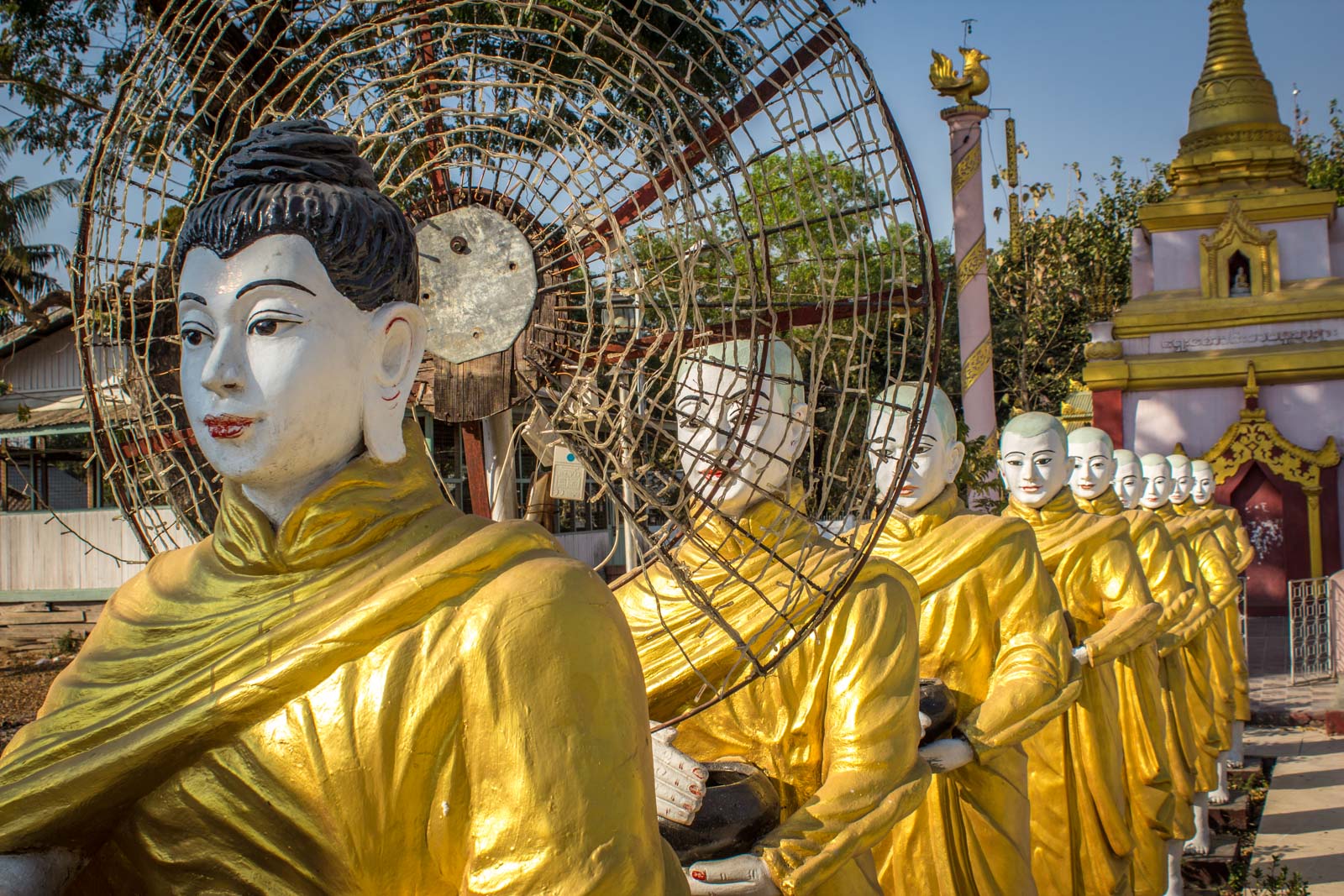 The ruins of the ancient temples throughout the country show you the history of Buddhism in Myanmar. Although the area of Bagan is the most famous, you’ll find sprinklings of ruins in many other places.

They are still revered (and you’ll often find people praying at the ancient statues) but they’re not always maintained to the highest standards. 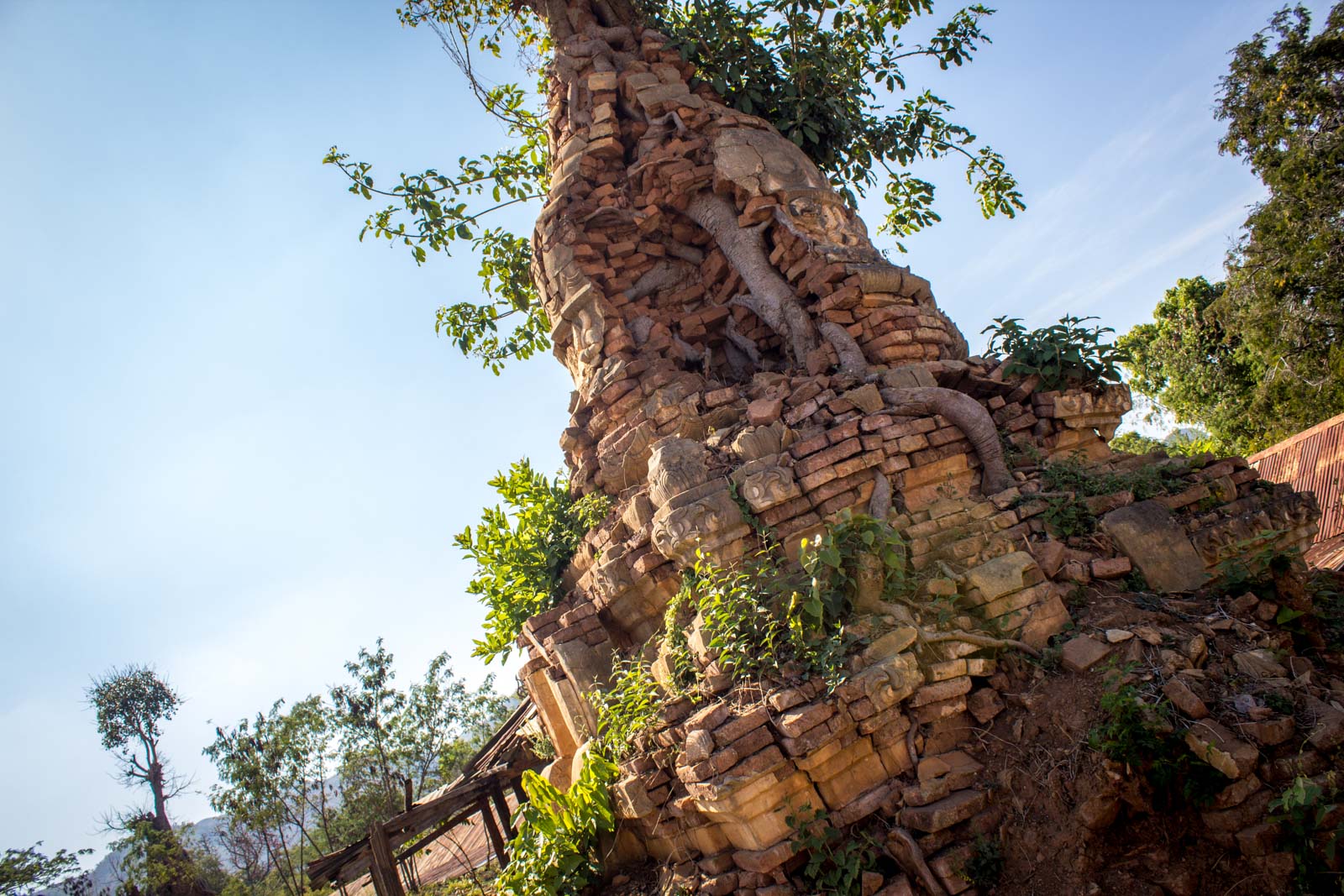 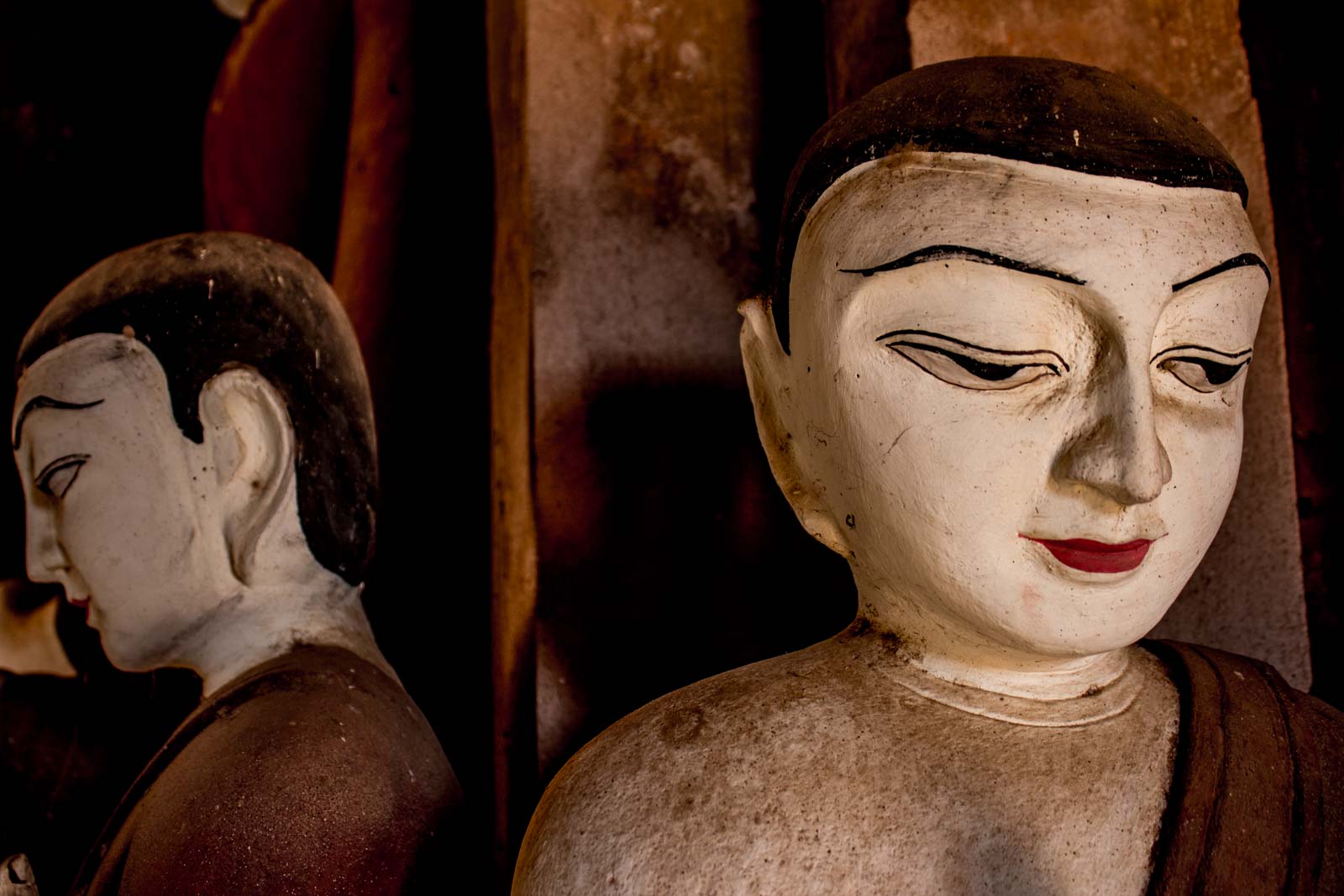 It’s really dry this time of year and you can see that in the landscapes outside of the big cities. There’s a haze which is always hovering just above the ground, giving the country a rather ethereal feel when the sun is lower in the sky.

Most people outside the cities work on the land, tending to their crops, and it’s the backbone of the society here. 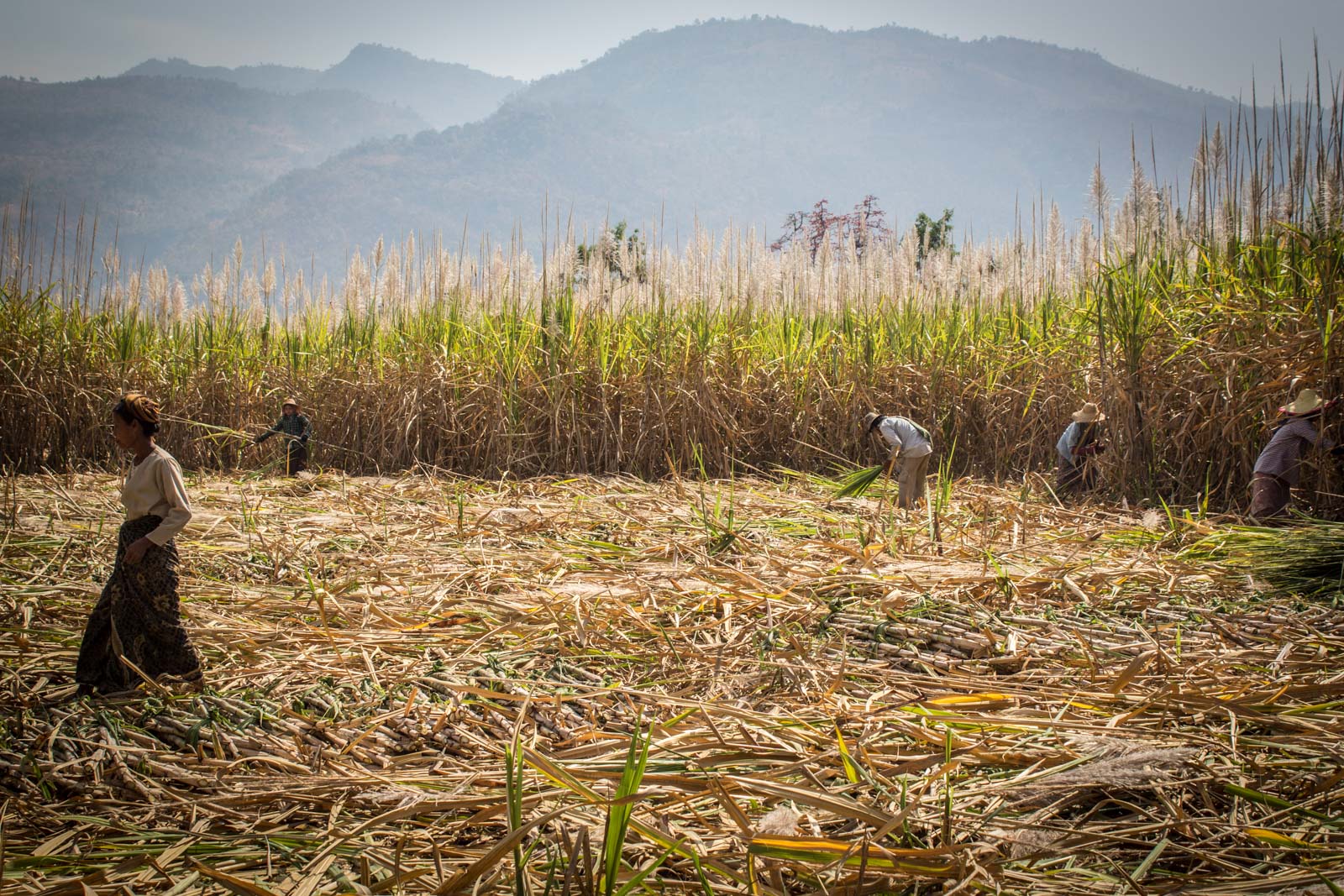 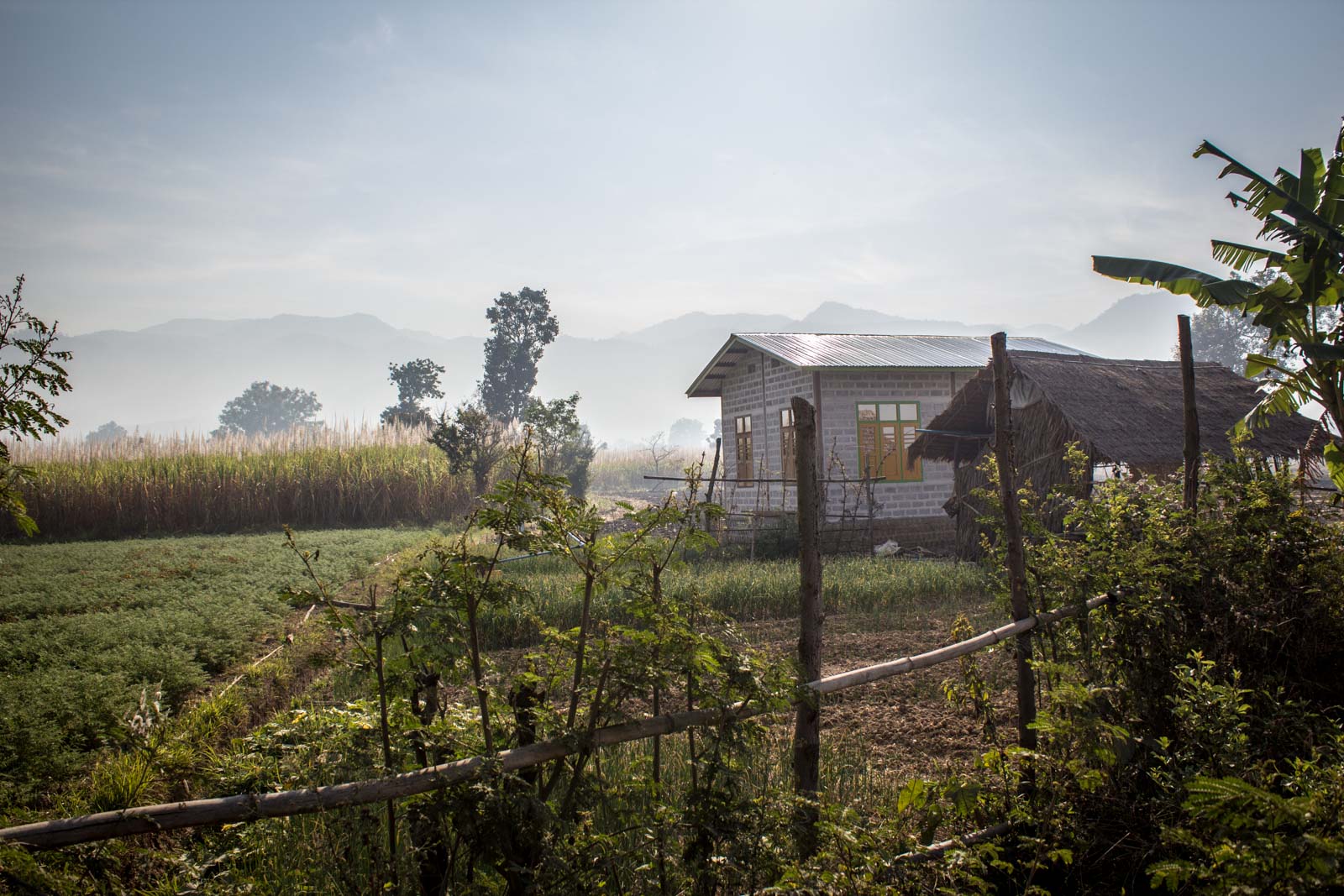 The smiles – oh, the smiles! I’ve said it before and I’ll say it again, the people in Myanmar have a genuine friendliness to them and are so welcoming of foreigners.

How can you not have our heart lifted a bit when you see these open faces with their broad smiles? 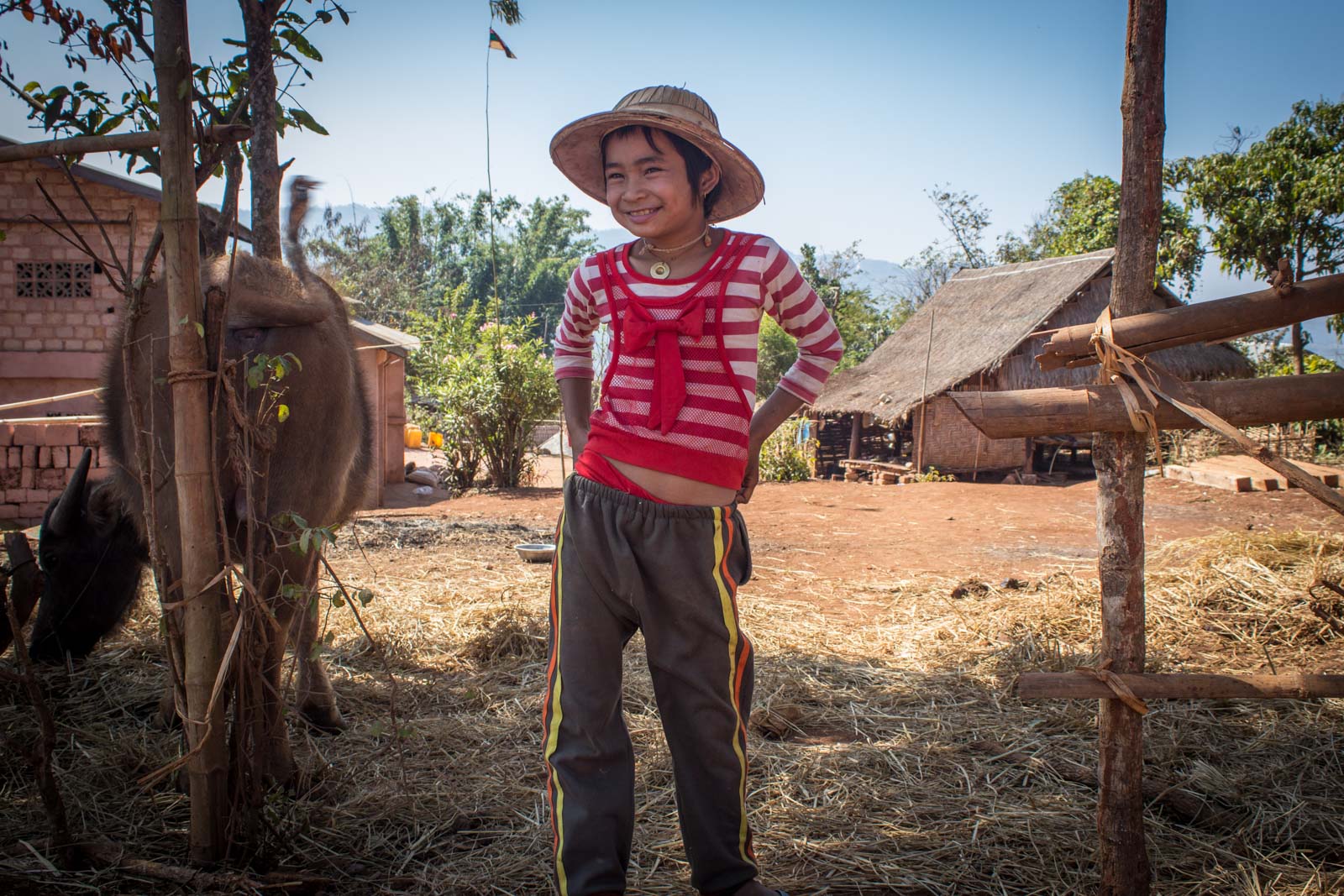 I love this shot, not because it’s particularly well-taken, but because of what it shows.

To get good karma, people sometimes will buy captive animals and then set them free. This young couple is buying some fish that they will take to the lake across the road and release.

Their faces say it all. 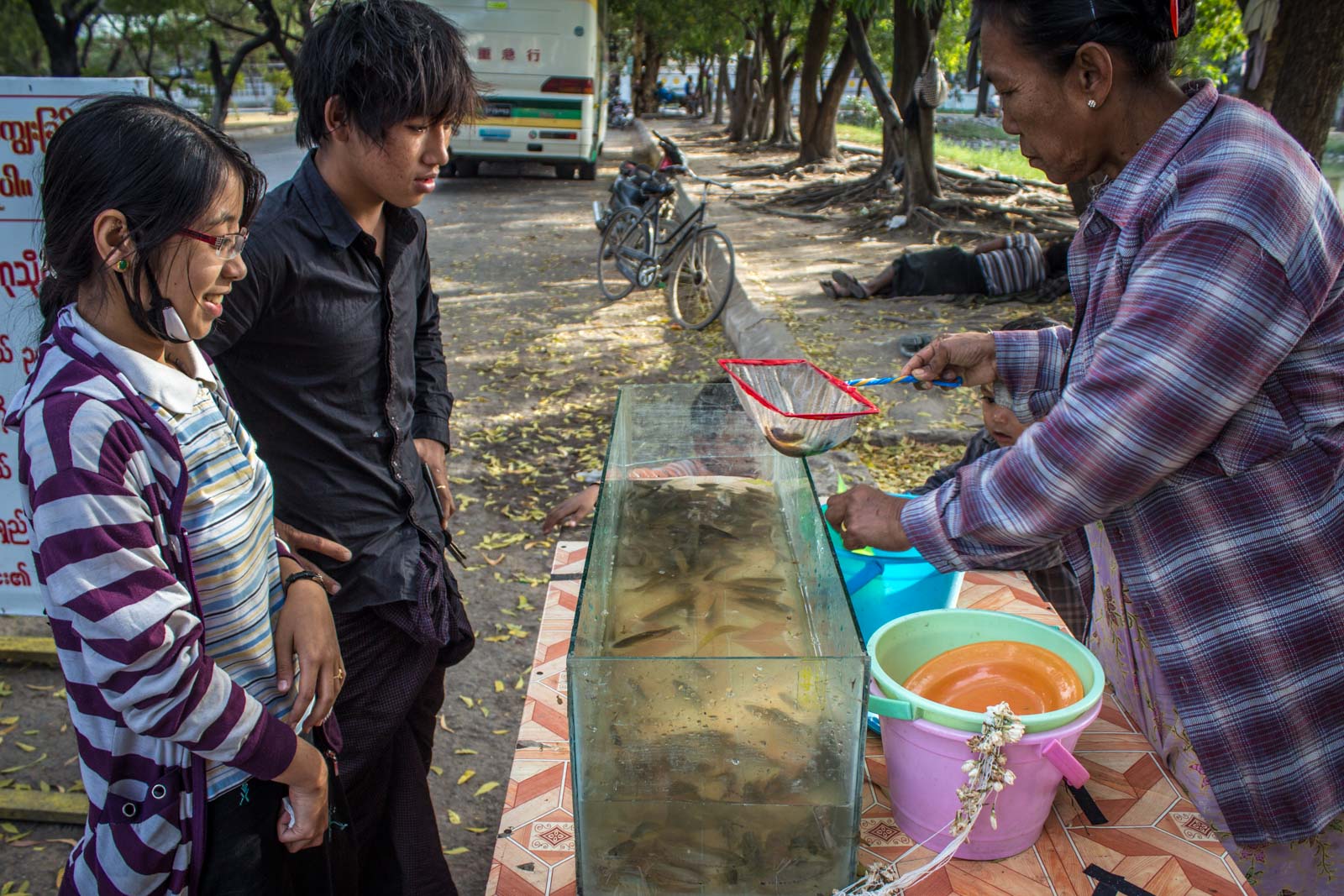 The food in Myanmar has a bad reputation but unfairly, in my opinion. There’s a great range of cuisines with some really interesting tastes.

And the food is usually extremely fresh because it’s probably come from a nearby farm or lake.

Having said that, I have no idea what these are and I wasn’t brave enough to find out. 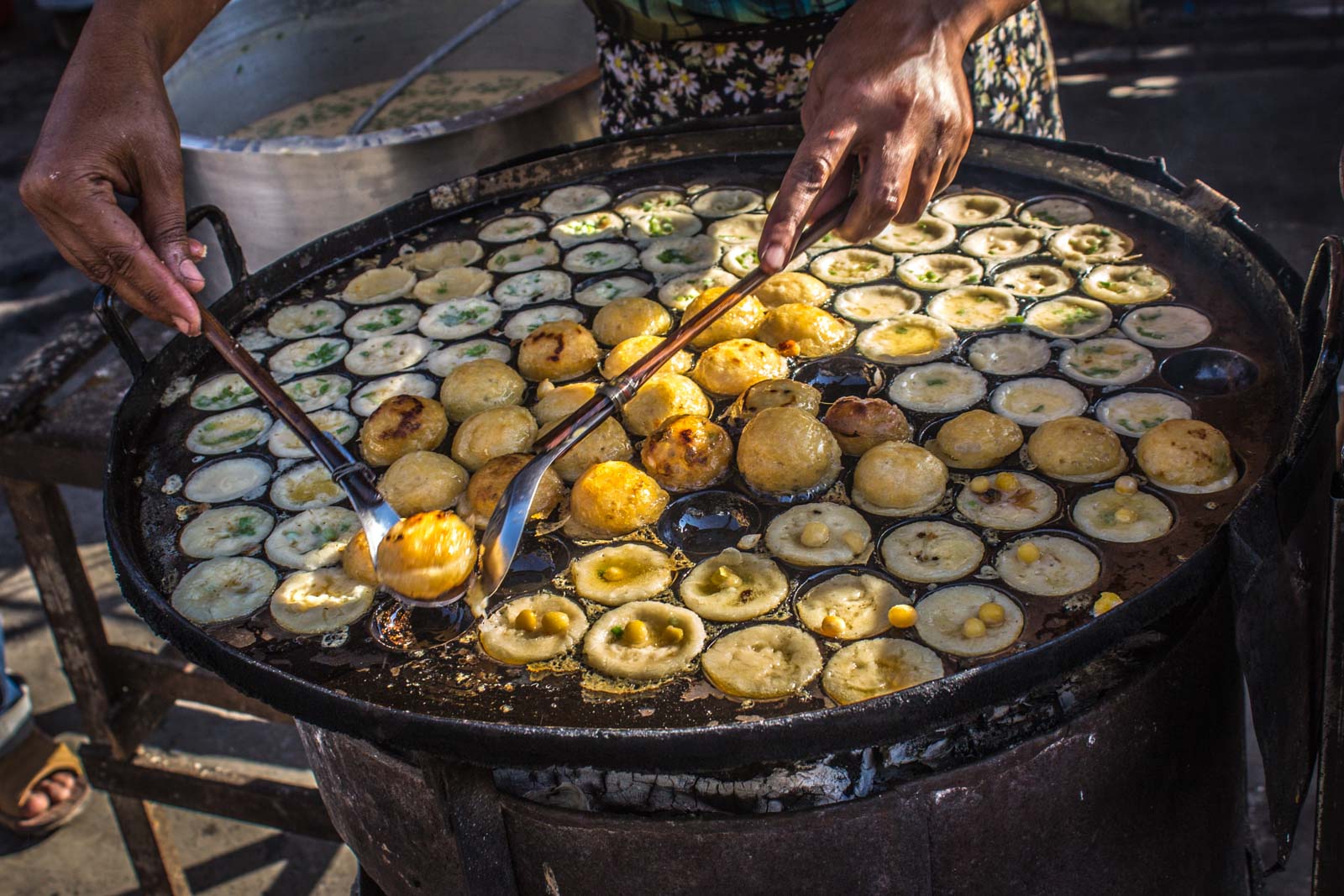 The Irrawaddy River has been the lifesource of these parts for centuries. Commerce, transportation, food – it provides it all.

This sunrise also shows you how beautiful and peaceful it can be at parts. With religion being such an important part of life here, many young people choose to spend some time devoted to Buddhism. You’ll see lots of monks and nuns everywhere you go, normally just going about their daily life.

A peek into a monastery (like the first photo below) shows you the routine they must go through as part of the religious studies.

Most monks eat just two meals a day and all the food is donated by people hoping to increase their karma and community standing. 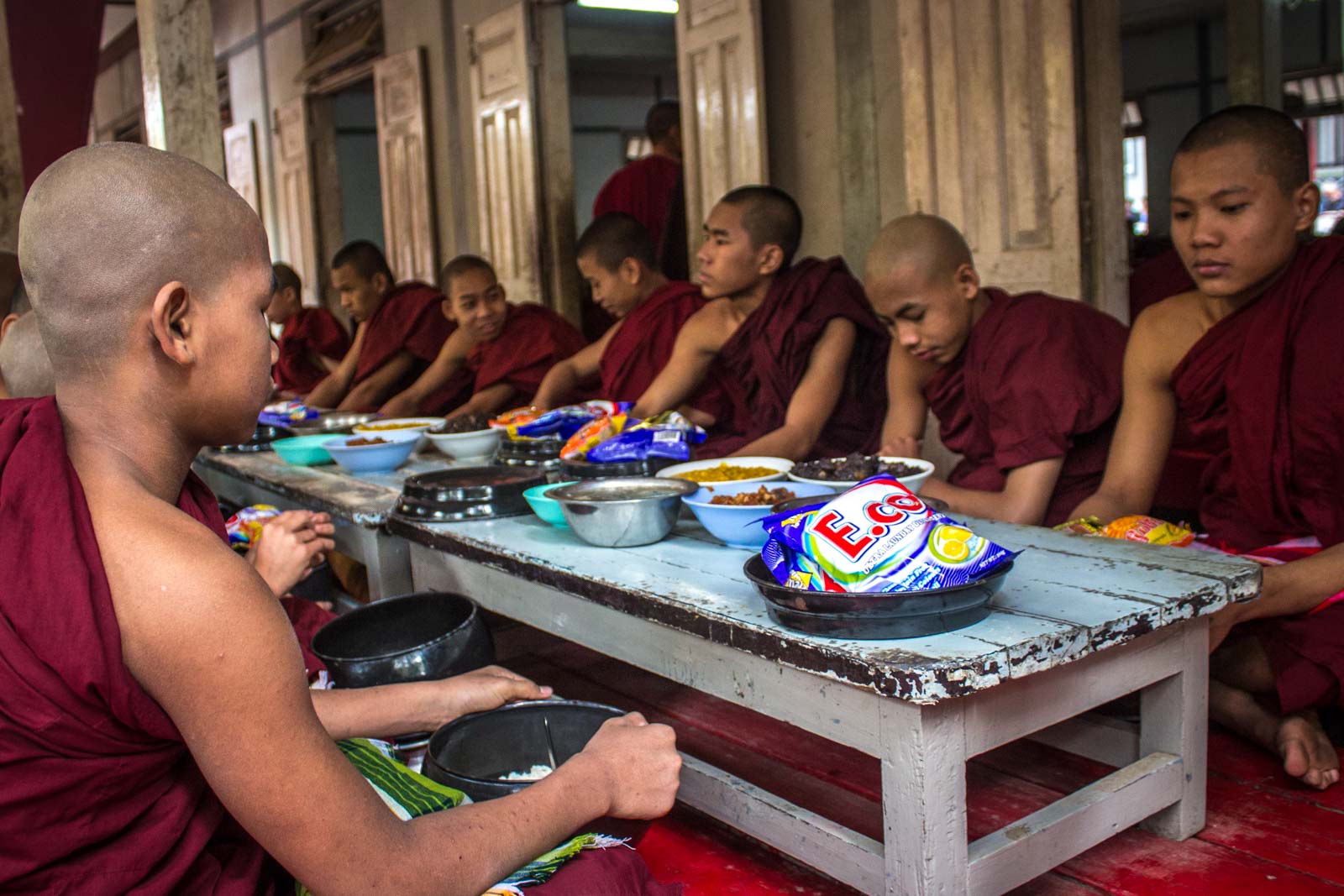 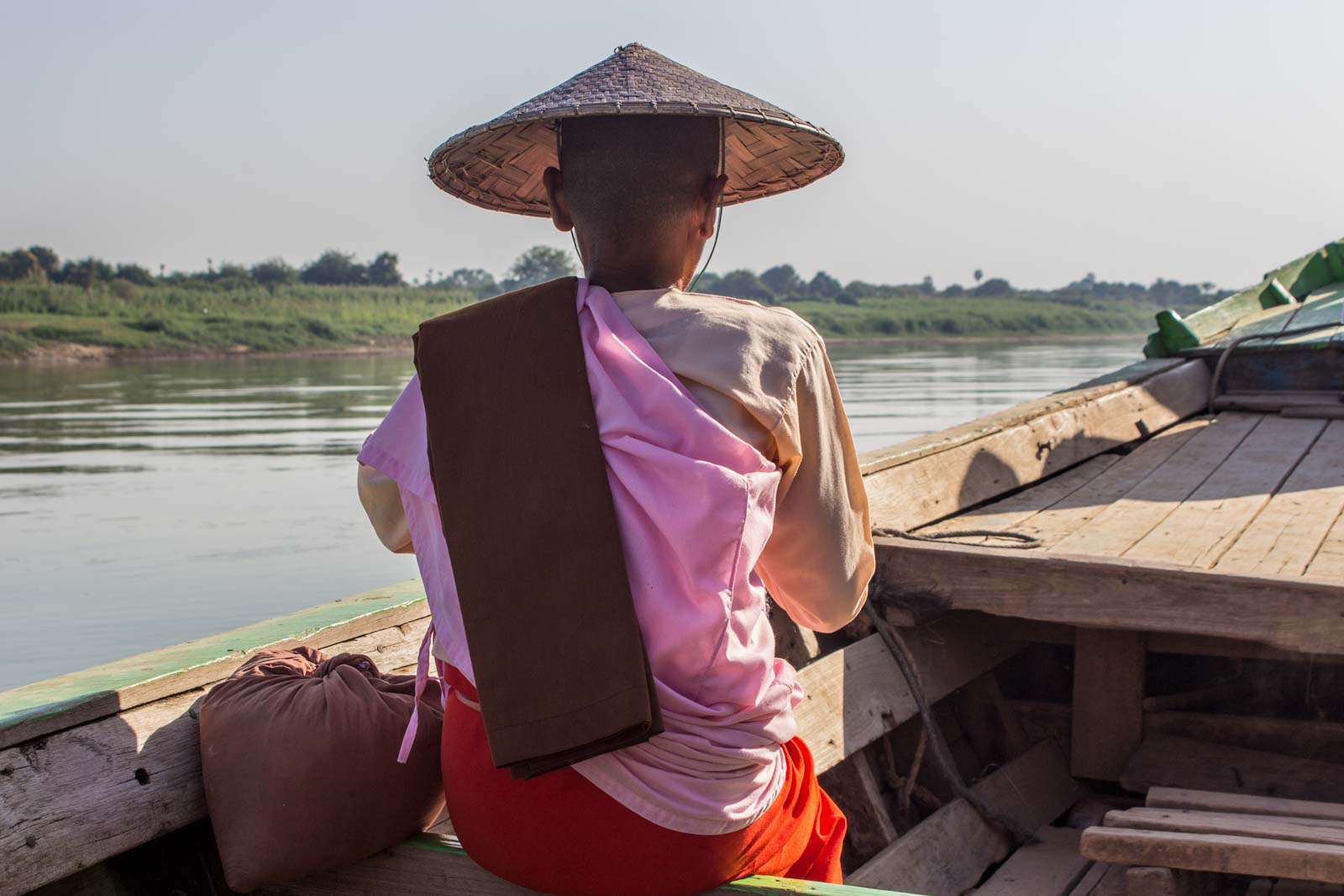 The walk to the top of Mandalay Hill is one of the iconic things to do in Myanmar – I went up there just after visiting the Mandalay Palace.

It’s a long way up but the journey is filled with fascinating little altars and temples along the way. The view from the top, as the end of the day approaches, was made more spectacular by the vivid clouds. 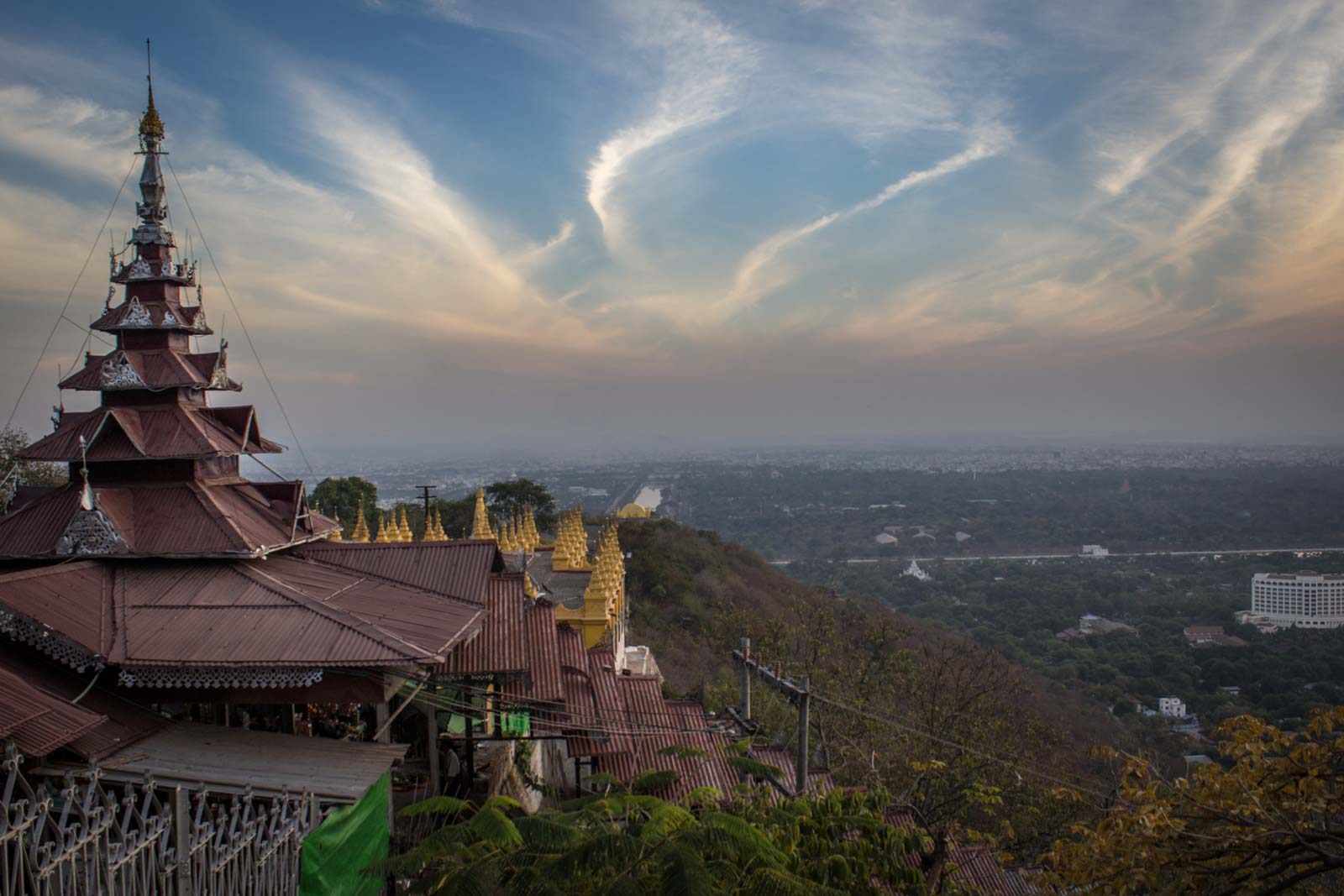 Even though I couldn’t read a single word and had a lot of trouble even speaking Burmese, I found the symbols of the language to be really beautiful.

There’s something about all the curves and circles which make any sign look like a piece of art to me! 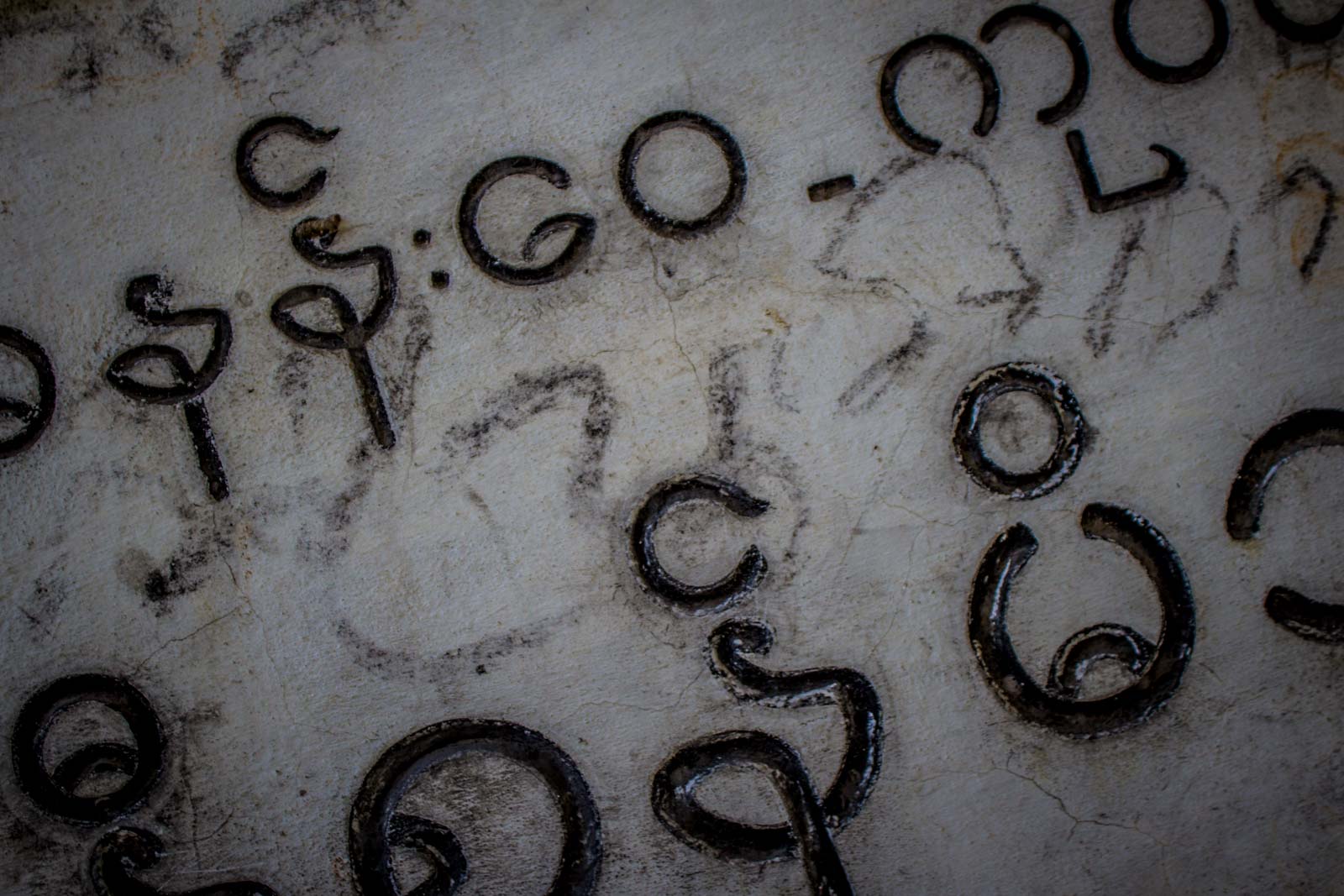 If you like shopping, then Myanmar might not be the place for you. There are no nice big malls or designer shops.

In fact, there are (thankfully) very few souvenir shops as well, save for around the most popular attractions.

This shop is not aimed at tourists – it’s for locals who want to buy something to leave at a pagoda as an offering. 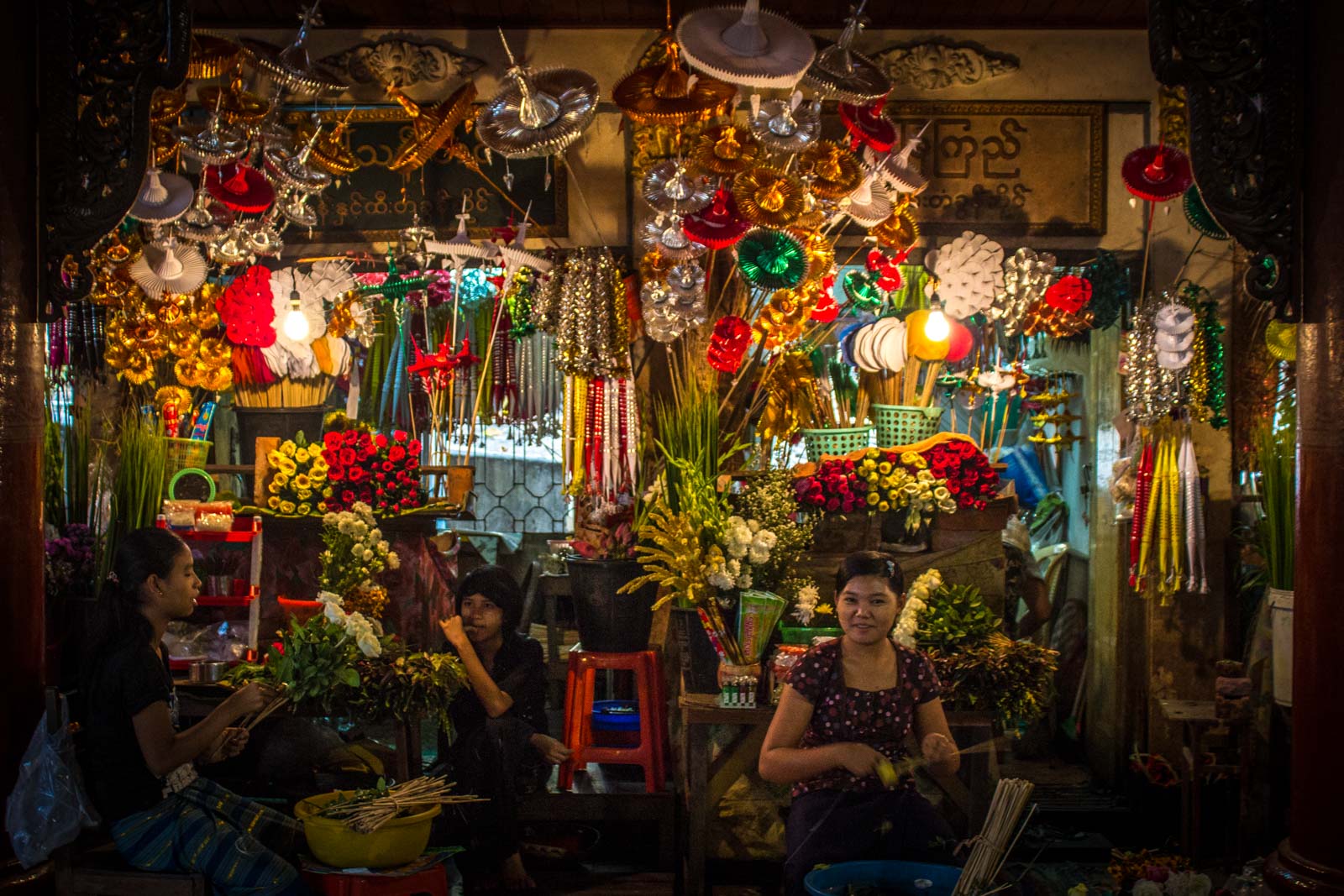 Getting to a Buddha

The entrances to the country’s pagodas are often as interesting as the pagoda itself. Sometimes it can be a long and steep staircase, sometimes through the wilderness, and sometimes along a lengthy covered passageway like in the photo below. 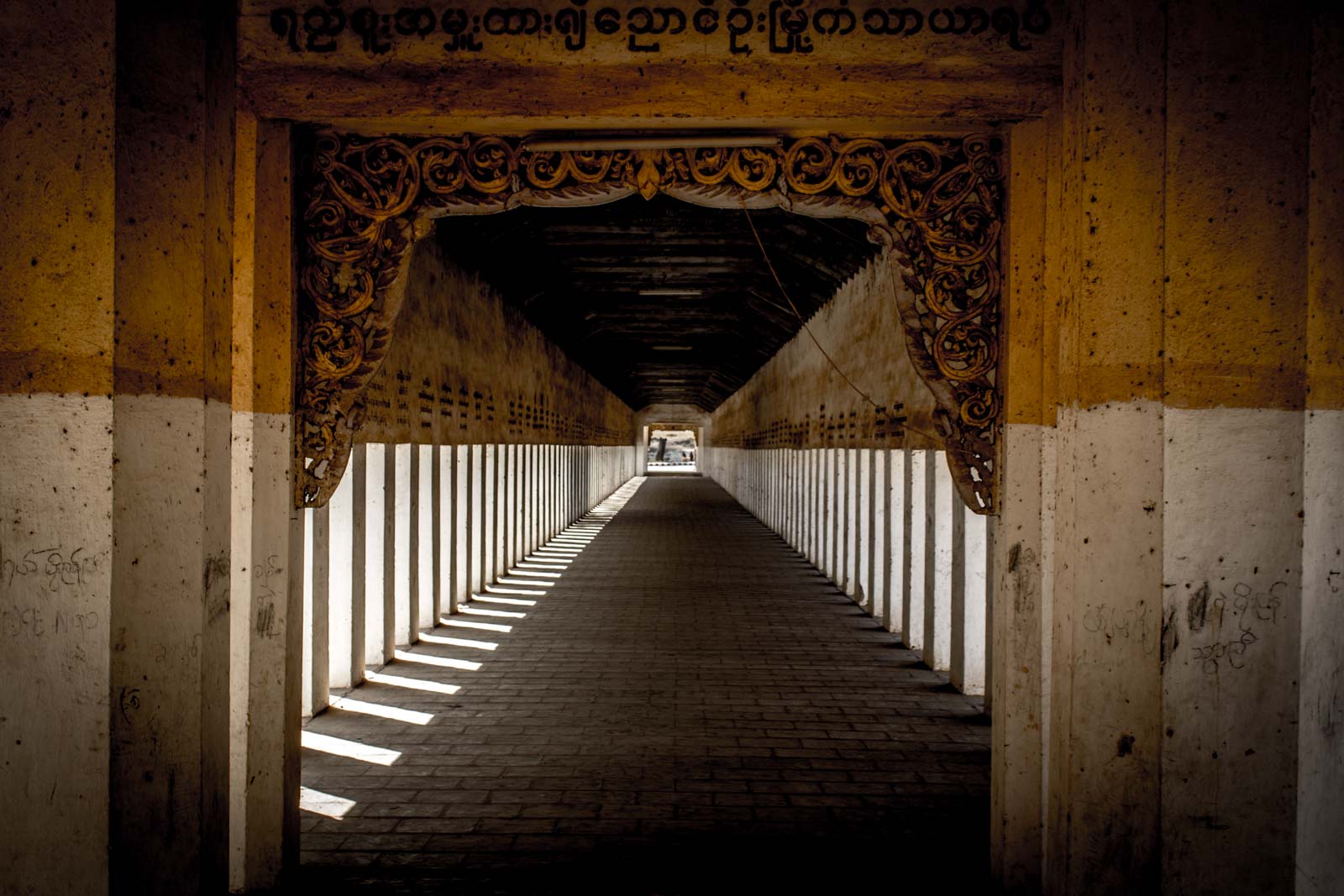 This Buddha statue is considered to be the most important in all of Myanmar. It’s called the Mahamuni Buddha and is in Mandalay.

The reason it is so special its because it’s said to be one of only five images made during the Buddha’s lifetime. Two others are in India and the other two are in paradise.

You can see by the crowds who sit down in front of it to worship how special it is to the local people. 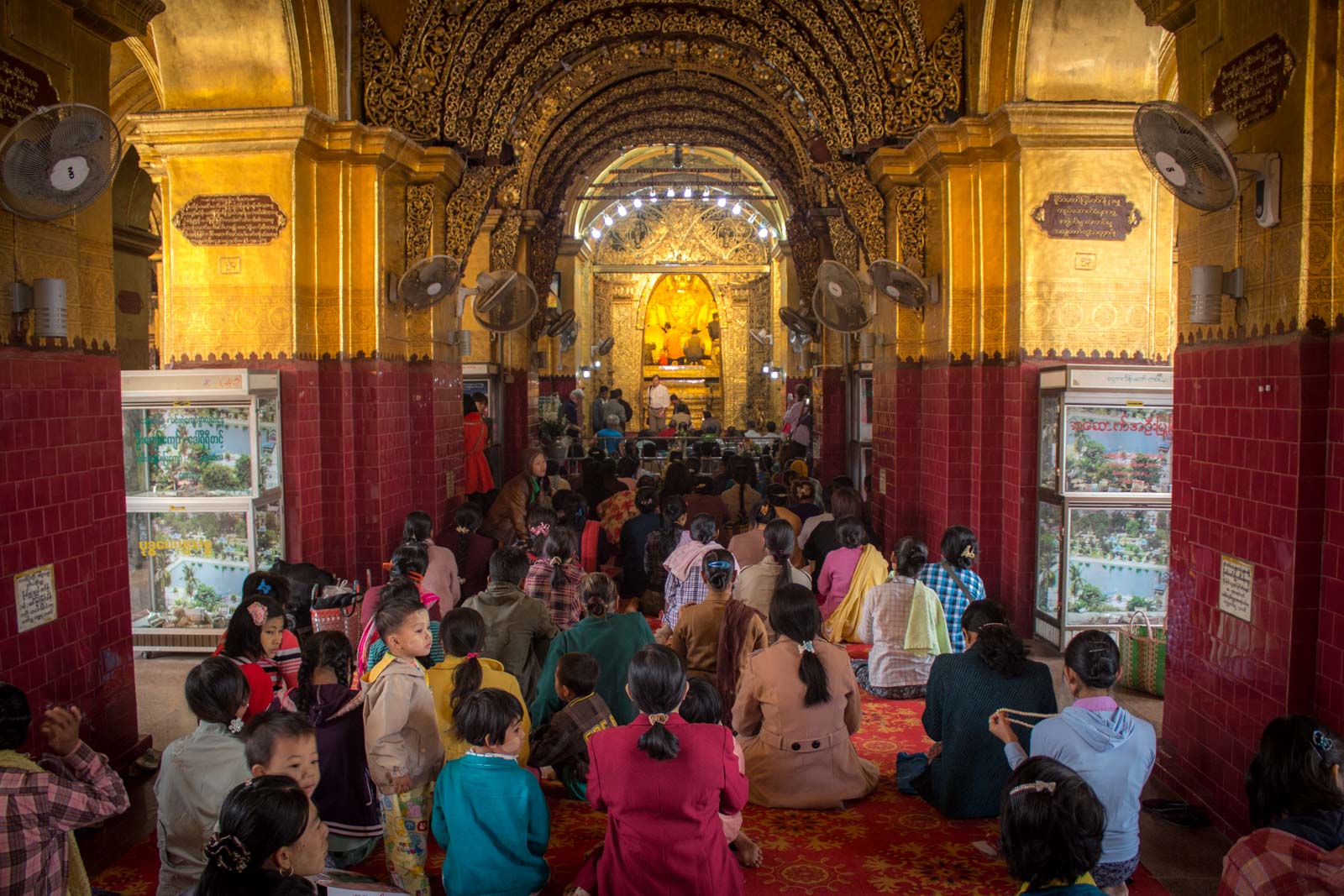 But, of course, it’s much easier to have your own Buddha statue in your home. If you need one, these guys can make one for you! 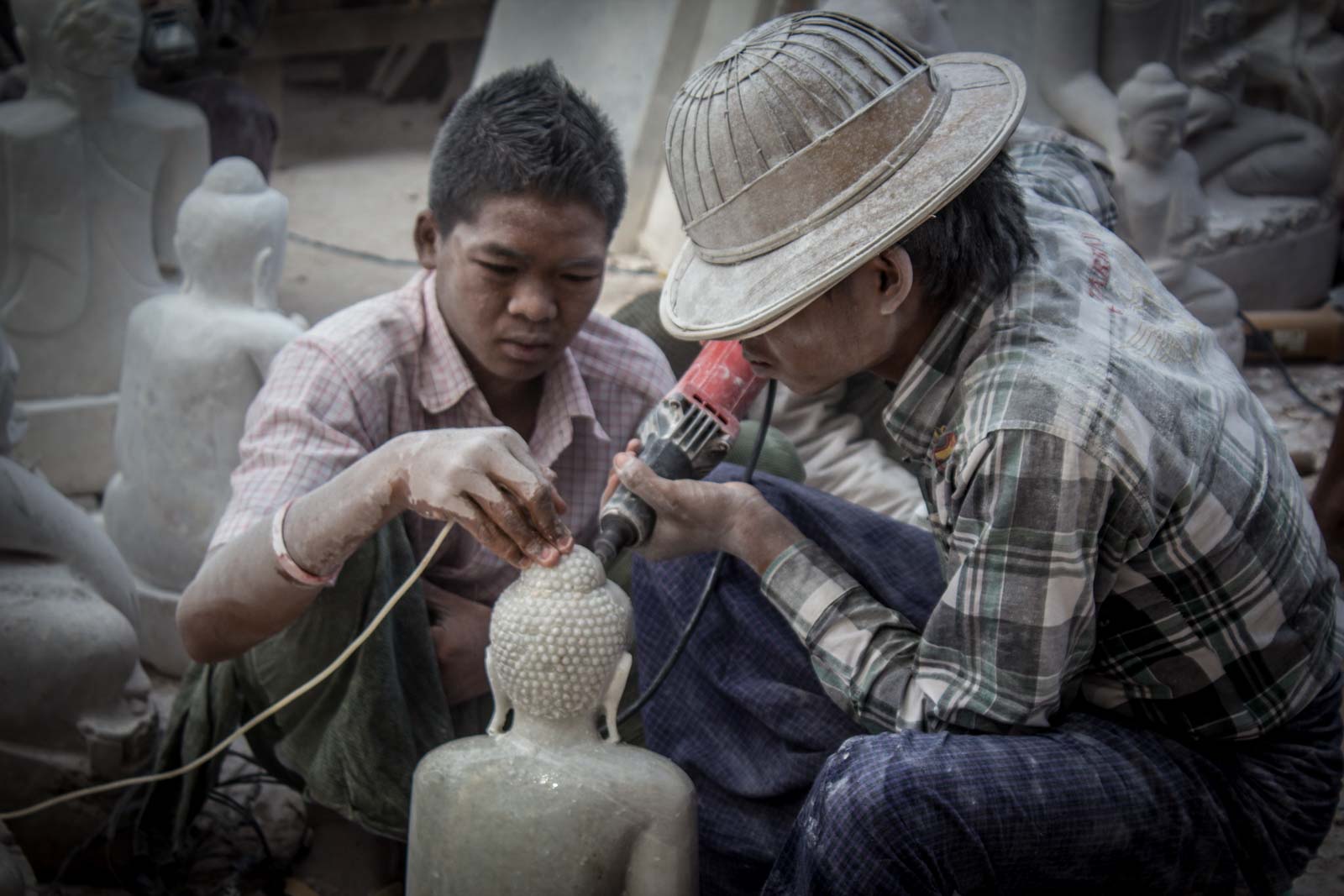 There are temples and monasteries devoted to all sorts of things. Here, on Inle Lake, is a monastery devoted to cats.

They rule this place and can go and do what they want. It used to be called the Jumping Cat Monastery but I was told by everyone they have now retired and prefer to spend their days just lazing about and waiting to be fed. Pfft – cats! And finally, if you don’t like cats, or if you like cuteness (and who doesn’t) here are some Burmese puppies. Enough said! 🙂 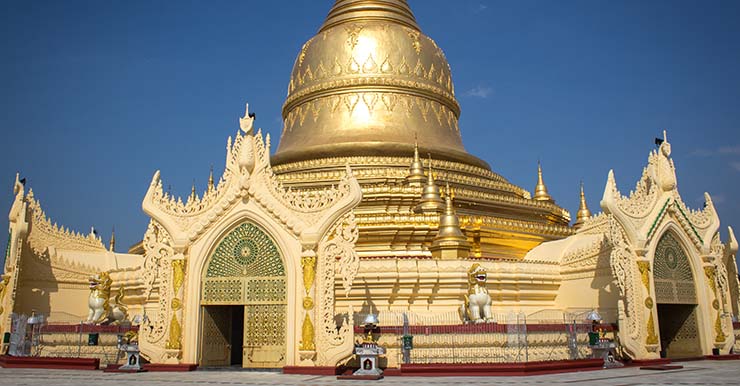