It would be easy for a tourist to think of Nuremberg as just the Old Town. It’s filled so densely with things to see and do, you could easily pass a few days just within the grand medieval city walls.

If it wasn’t for the unfortunate connections with twentieth century history of rallies and trials – which the people here do not shy away from acknowledging – it would probably be only the Old Town that you thought of when someone mentioned Nuremberg.

I arrive in Nuremberg just in time for the Altstadtfest – or Old Town Festival. It’s the largest of its kind in Germany and fills the main square more famously used for the Nuremberg Christmas Markets and then spills out along the river and onto an island in the middle. 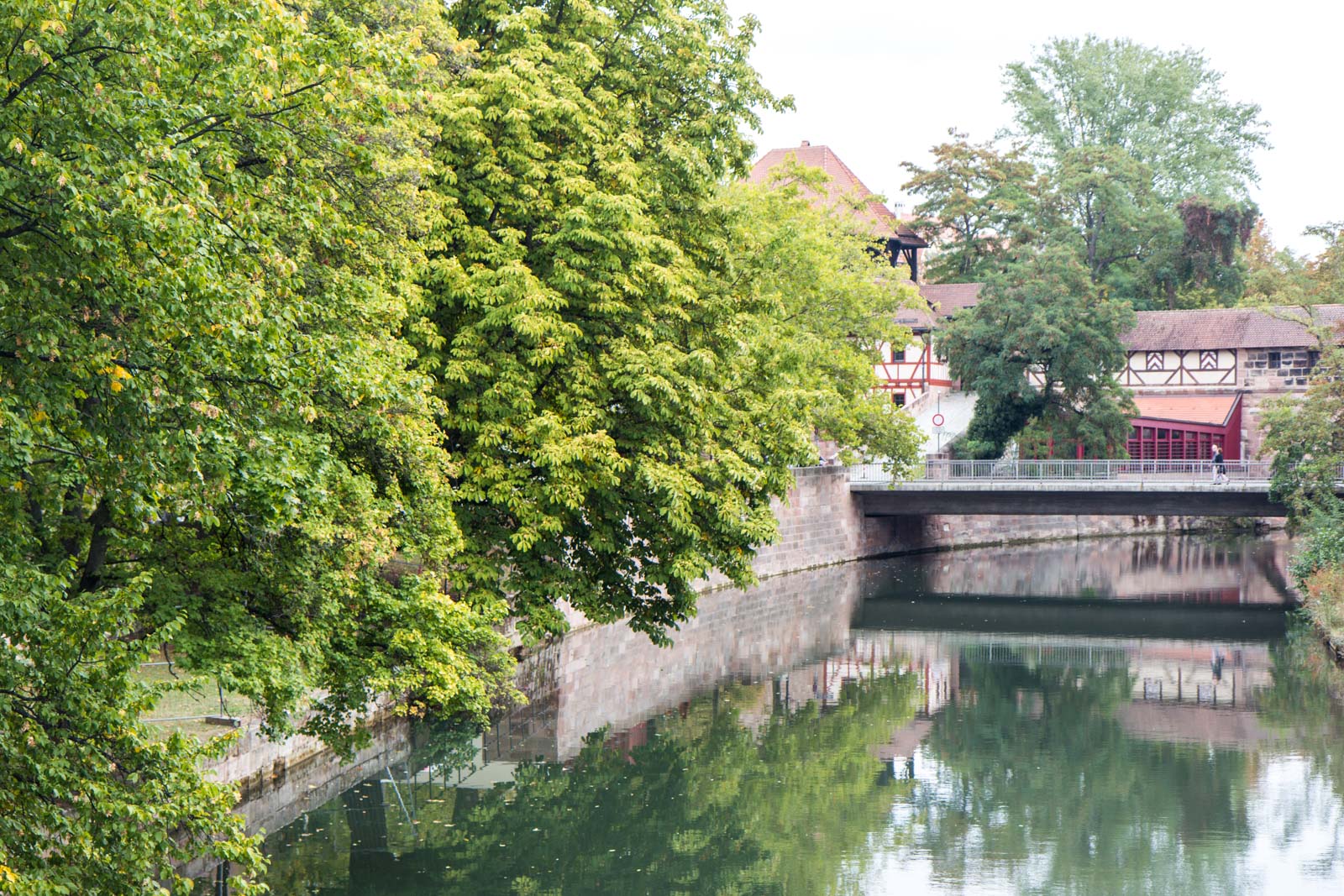 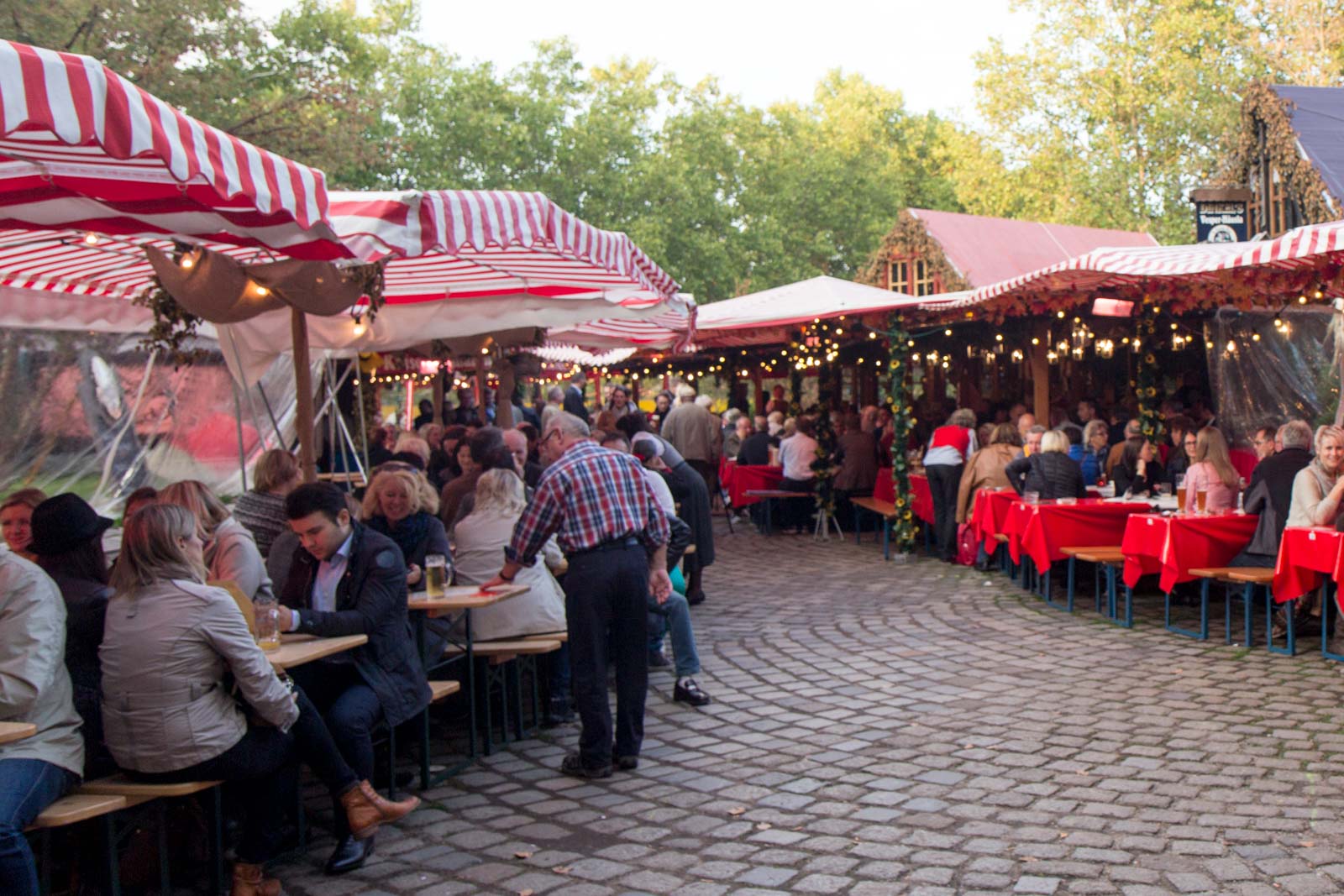 If it wasn’t for the stalls in front, you would get a clear view across the square to the Church of Our Lady – one of the city’s most iconic sights.

It was built in the 1300s on the order of the then Roman Emperor, Charles IV. The famous mechanical clock in its facade was installed in 1506 and shows the emperor surrounded by his prince-electors. 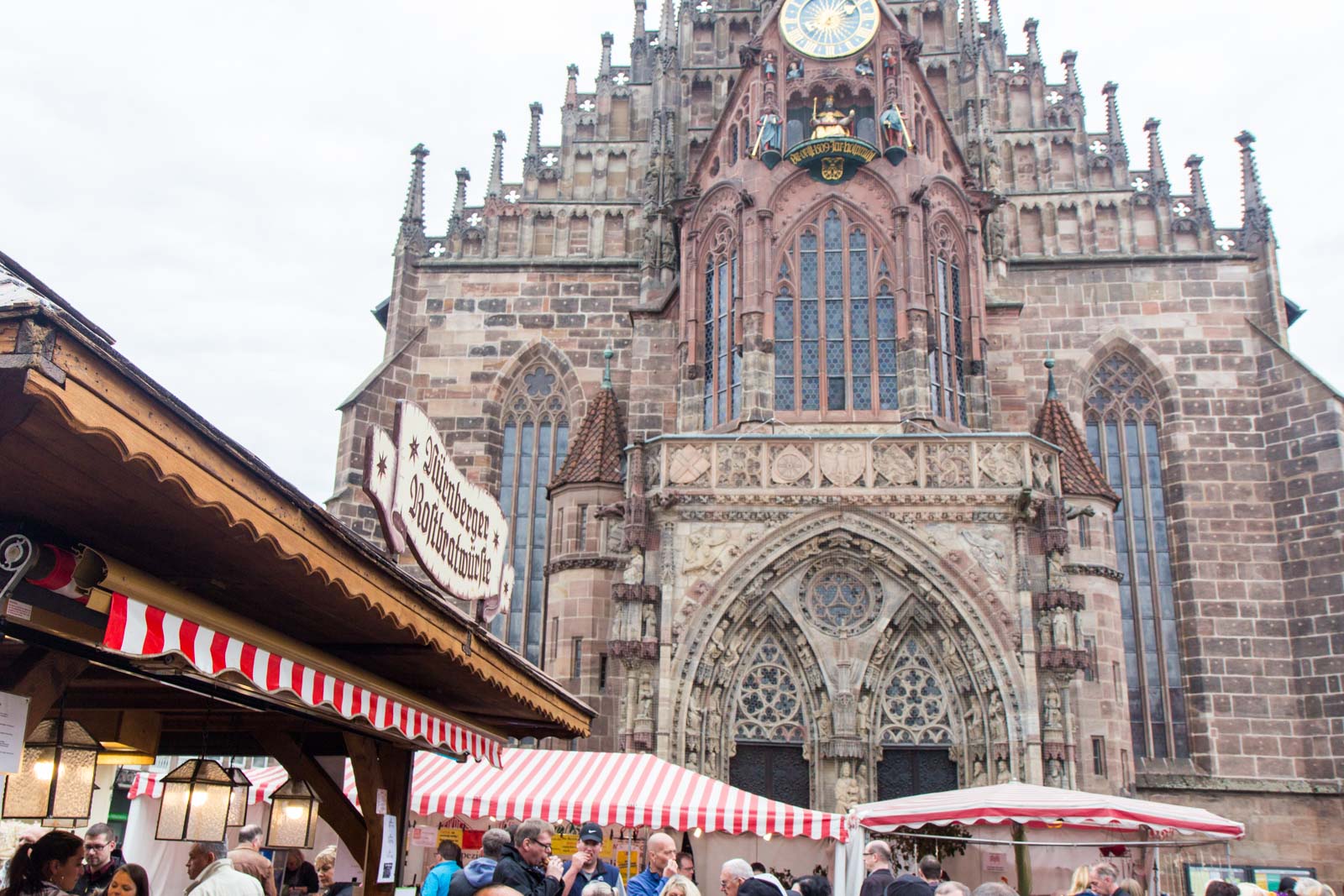 From here it only takes minutes to see the other important landmarks – the two other main churches (on either side of the river from when Nuremberg was effectively two cities separated by the water), the Nuremberg Toy Museum, the house of the famous painter Albrecht Dürer, and then up to the castle. 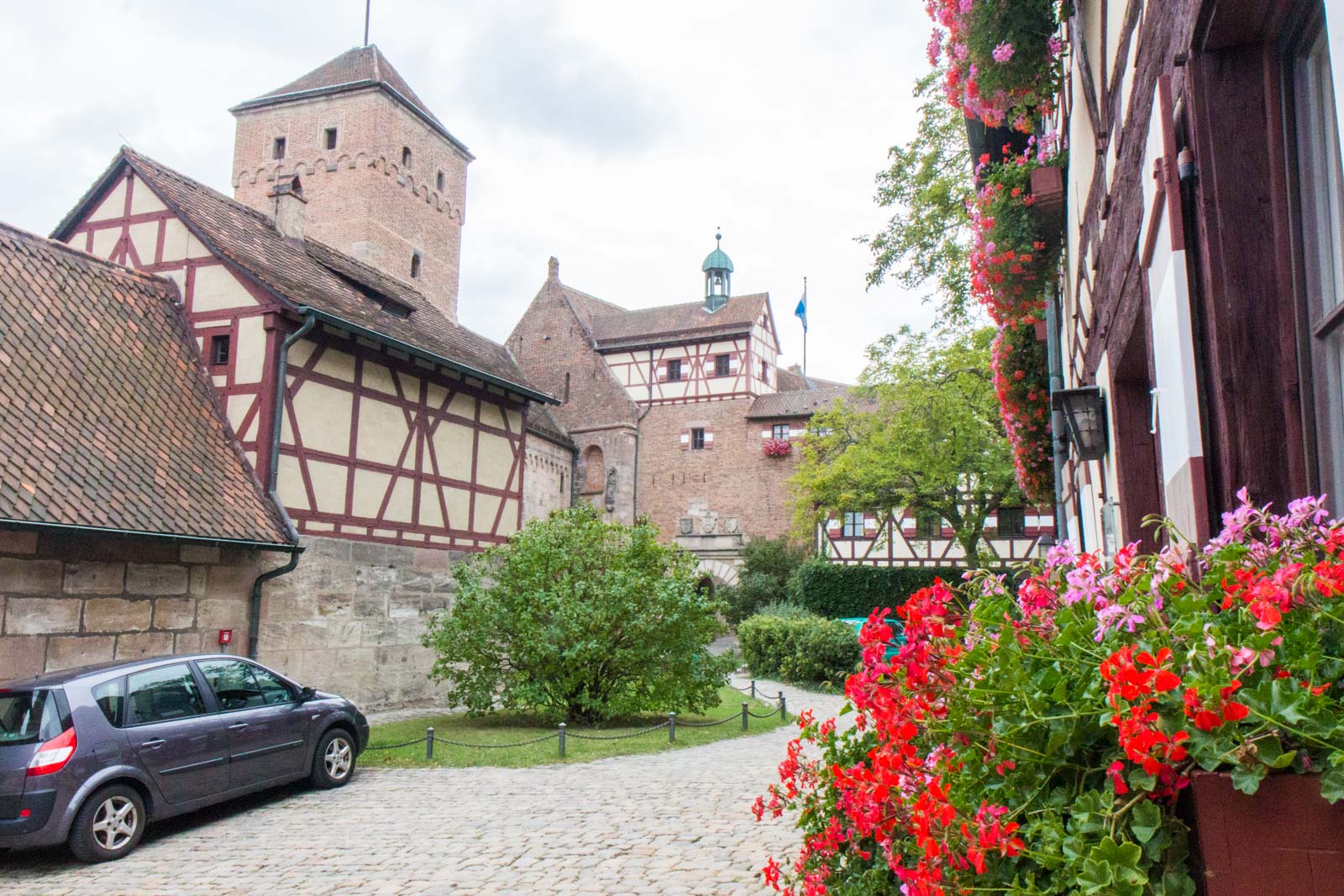 Nuremberg Castle stands at the highest point of the Old Town and dominates the views.

It may have been built to look outwards, protection against any potential invaders. But these days most people look upwards to see it from the city’s streets. Or they climb to the top and look inwards for a magnificent view across the skyline of old buildings and spires. 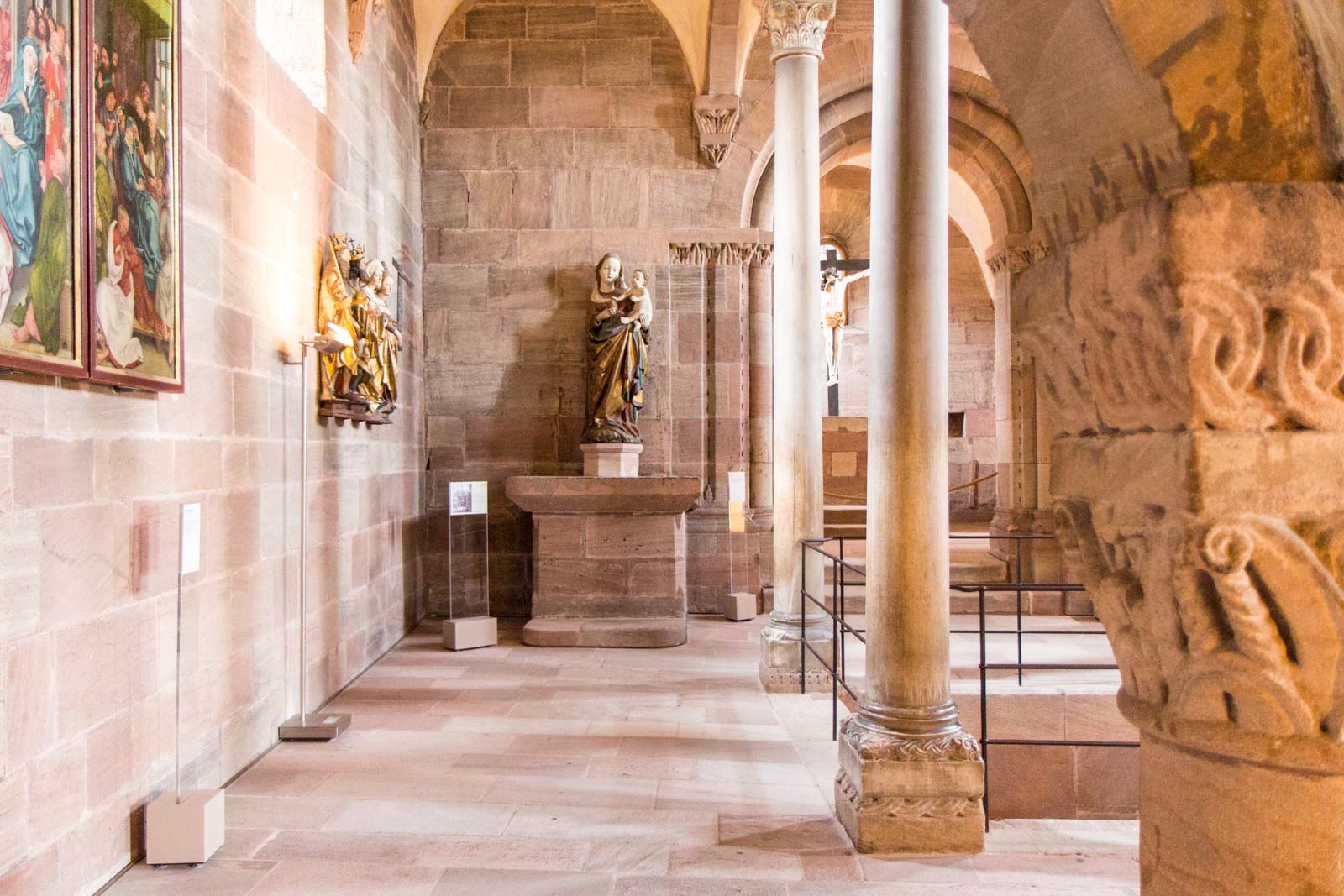 On my visit, I spend a couple of hours exploring the castle complex – from the grand interior rooms, to the deep well that falls way down beneath the rock it’s built in, to the Sinwell Tower that gives you a panoramic vista in every direction.

Perhaps there are some people who only think of the Old Town when Nuremberg is mentioned, not the events surrounding World War II. There certainly wouldn’t be anything wrong with that.

In fact, the Old Town is even more than just the buildings, as it turns out. There is a rich culture and history here – seen, for example, in the Craftmen’s Courtyard on the edge of the Old Town near the main railway station. 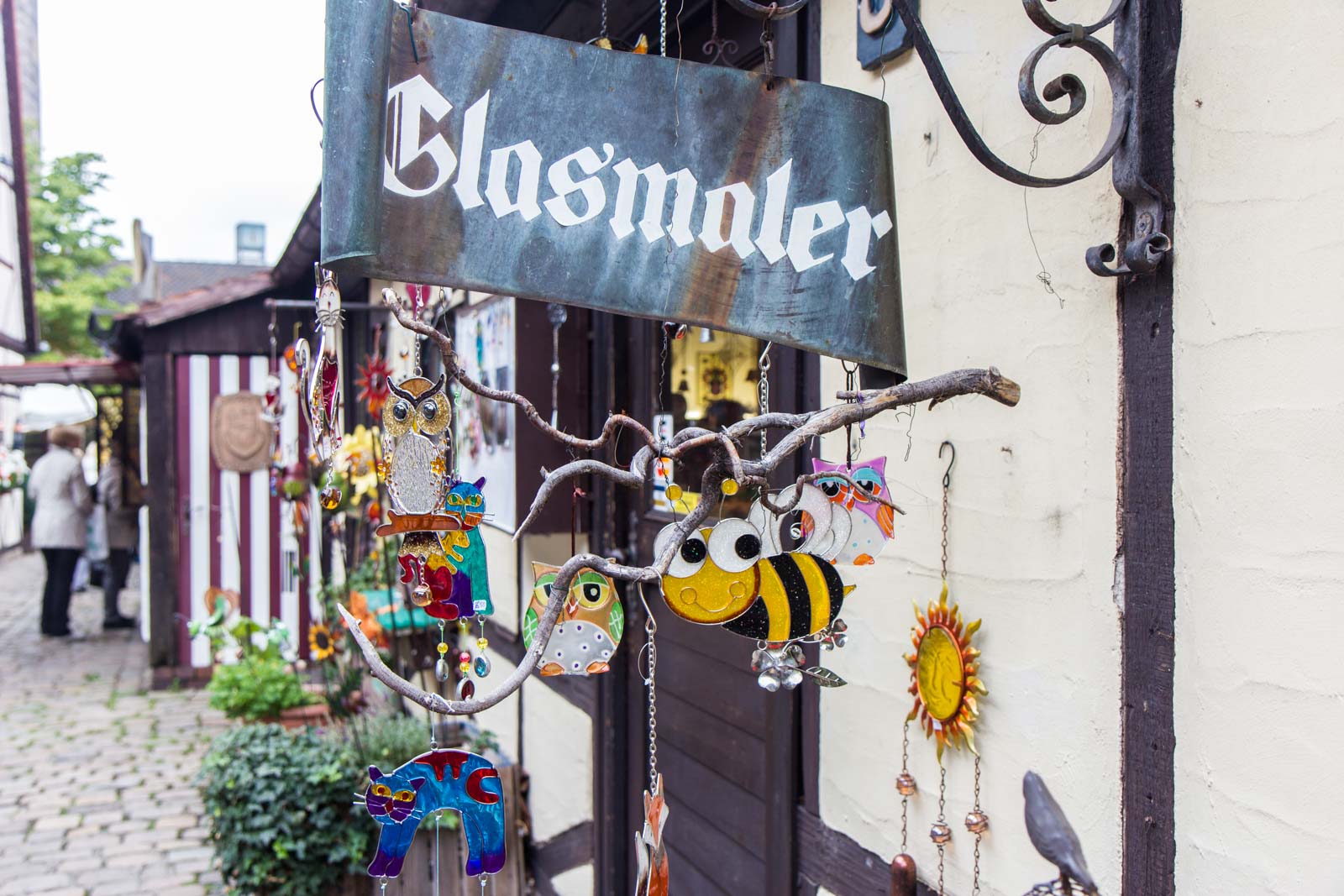 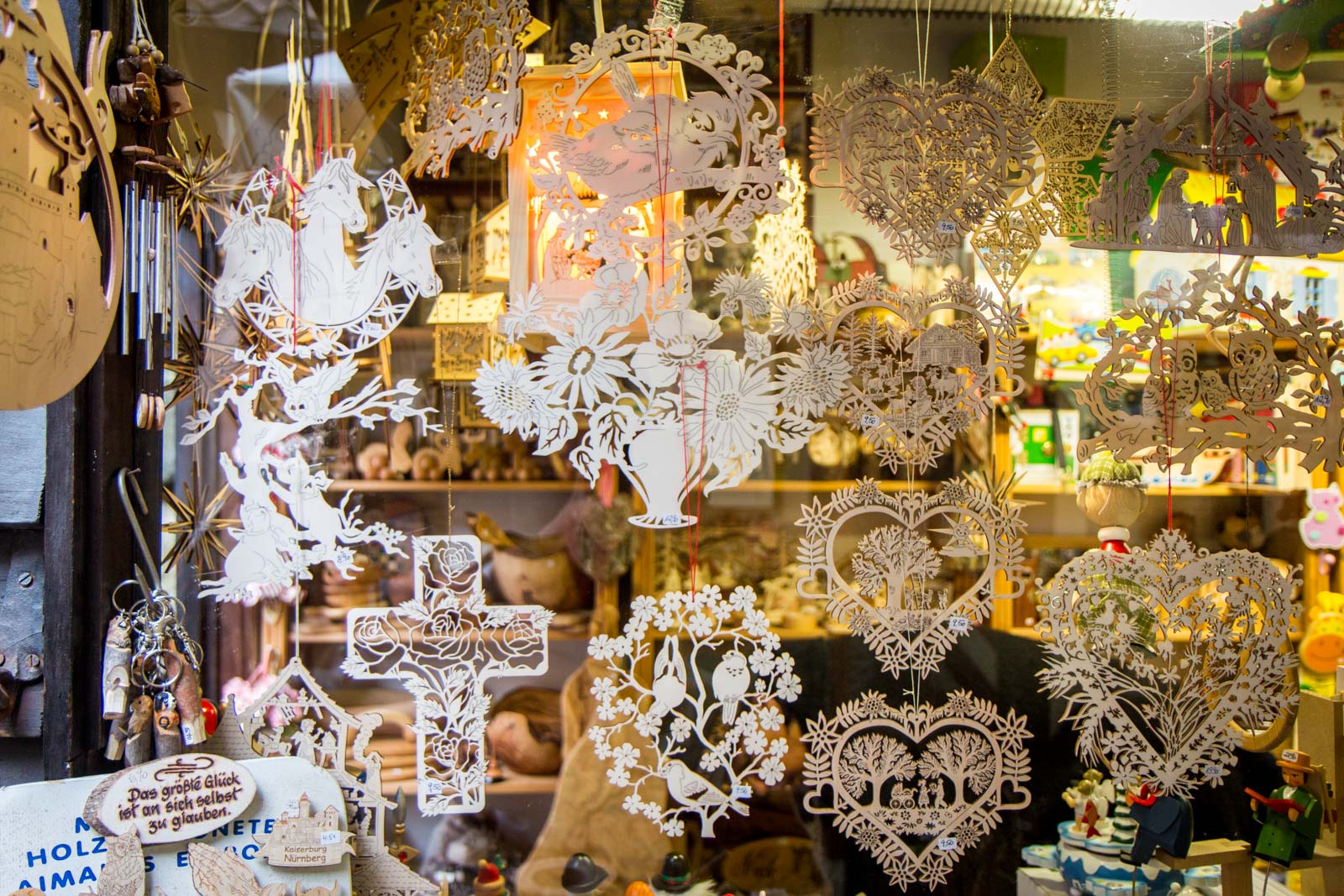 I, however, have one particular thing on my mind this time. It’s the food of Nuremberg. And luckily I can use the Altstadtfest as an excuse to investigate this firsthand.

Armed with an empty belly (to begin with) and a good appetite and thirst, I tackle these local specialties:

The Nuremberg Sausage is not just any old sausage. It has particular requirements it must adhere to in order to meet official guidelines.

It must be no longer than 9 centimetres, weigh no more than 25 grams. It must also be made only from mince pork (no other sausage meat allowed) and must have a fat content of less than 35 per cent.

They’ve been made this way for more than 700 years – there’s a legend that says the small size came about so they could be slipped through the keyhole of the city gate to people who were locked out for the night. 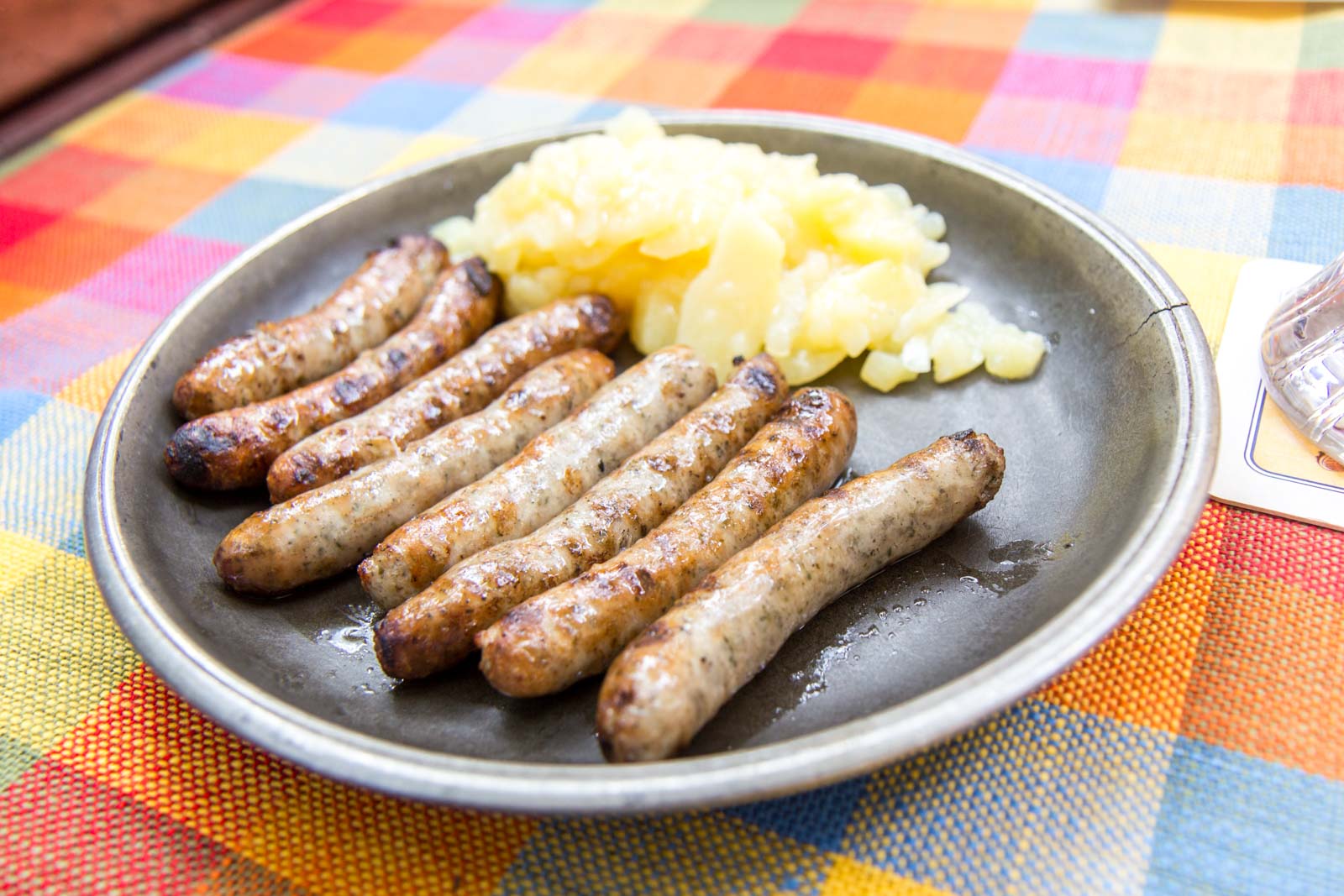 You can find restaurants serving the sausages all across the city and you need to choose how many you want in a serving. Because they’re so small, you may need up to a dozen for a proper meal.

One of the best places to try them is the Bratwursthäusle next to St Sebald’s Church.

Another classic dish here in Nuremberg is the Franconian Schäuferle – or pork knuckle. This is one large meal and you will not go hungry!

It’s made from a pork shoulder complete with the bone and rind. The interesting thing about it is that the meat is extremely tender while the rind is normally really hard and crispy. It’s usually served with potato dumplings and gravy. Yum! 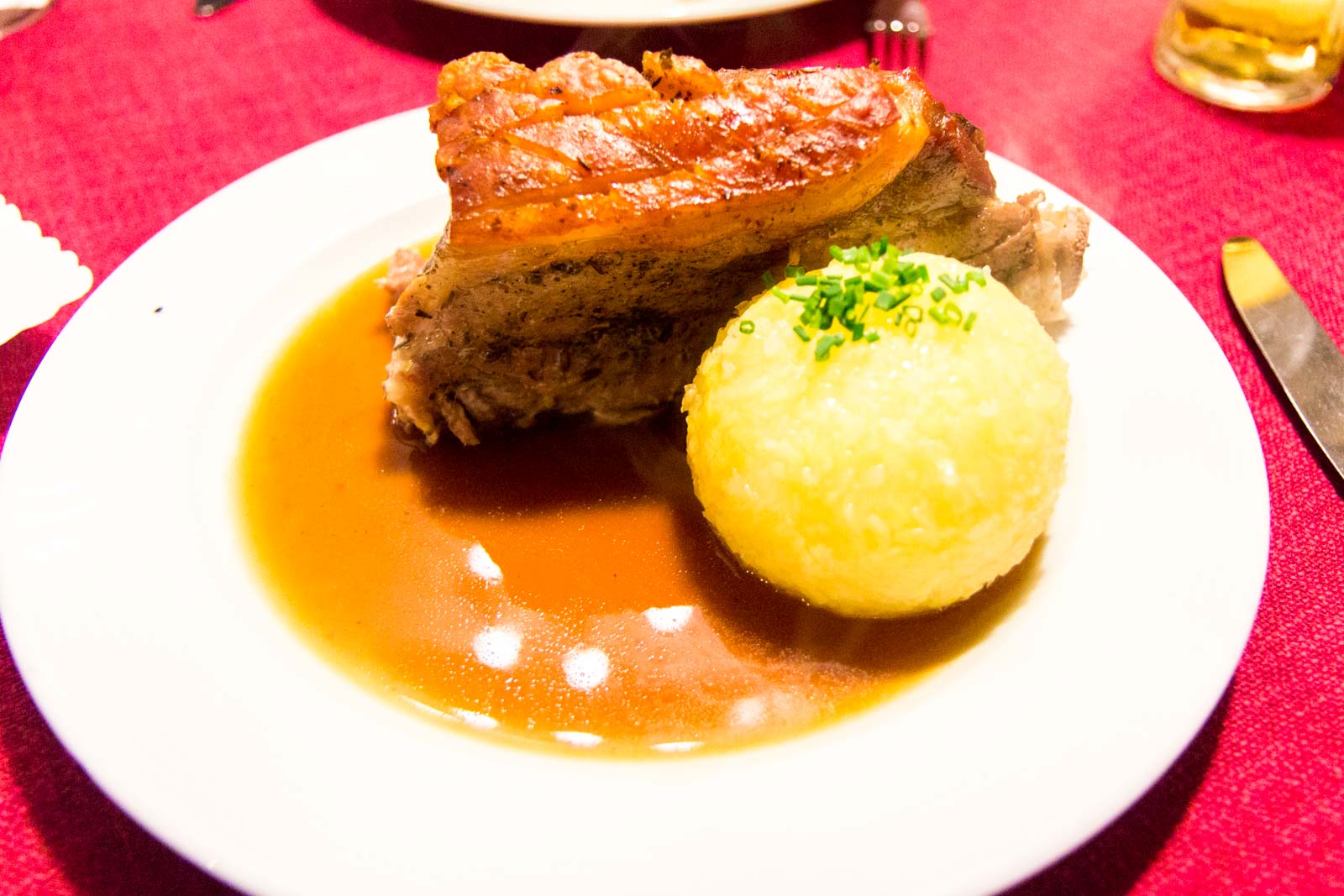 Traditionally schäuferle is eaten as a Sunday meal but you can get it any day from the city’s restaurants.

For an authentic experience, I would recommend trying it at the Albrecht Dürer Stube and ask for the berry liqueur to finish with. (There’s a great story about why the two go together but I’ll let you ask about it for yourself!!)

If you feel like something sweet after all that meat, then you’re in the right place. Nuremberg is, of course, famous for its ‘Lebkuchen’ or gingerbread. It was first made here by Franconian monks in the 14th century but has now become world famous.

One of the main reasons why Lebkuchen was so prominent here historically is because Nuremberg was a meeting point for ancient spice and trading routes. That means there were plenty of ingredients like cinnamon, cloves and nutmeg passing through the city and they were easily accessible. 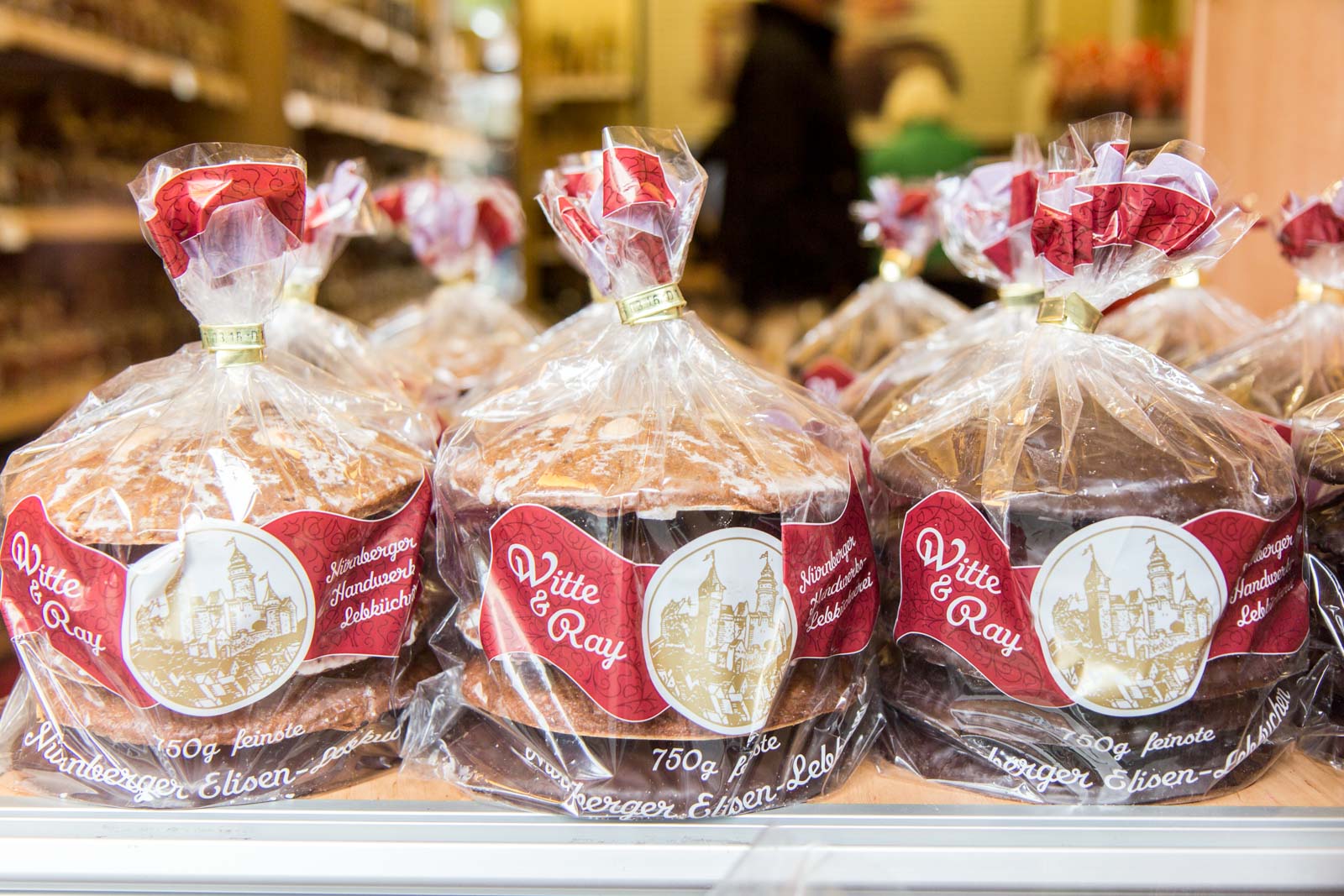 Lebkuchen is particularly popular during the Christmas season when the markets are on but you’ll find it for sale in shops all year round.

There is also a long tradition of brewing beer in Nuremberg – in fact, it goes back more than 700 years.

There used to be breweries all across the city and there was a time when people would drink more beer than water, including children. That’s because it was safer to drink than the water and had a relatively low alcohol content. 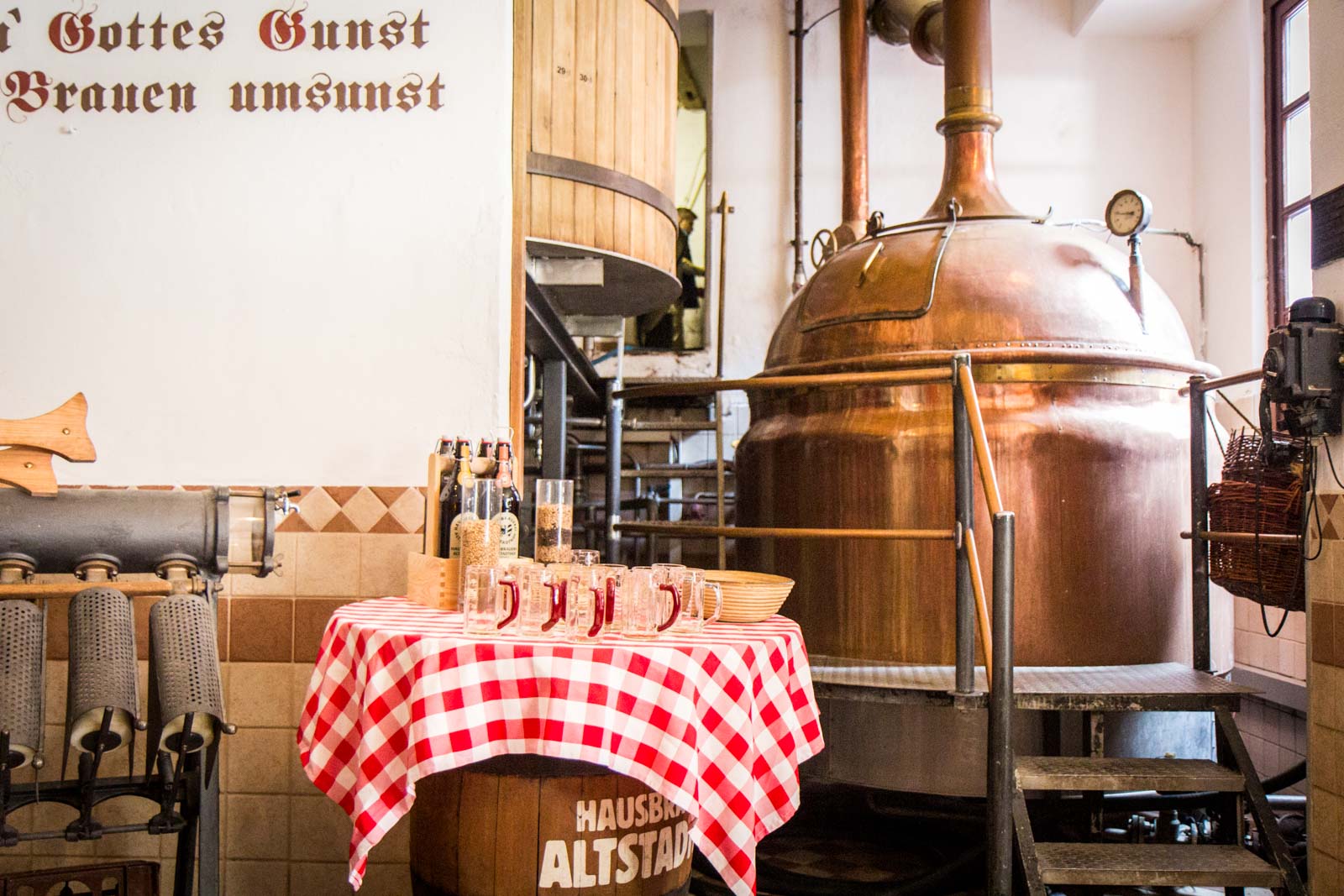 One of the best ways to learn a bit about the beer history is with a tour through the rock cut cellars underneath the streets of Nuremberg. The beer would be kept down here because it was cooler and wouldn’t spoil.

There were little cellars everywhere but many of them were joined up during the Second World War to create bomb shelters. You can organise a tour at Hausbrauerei Altstadthof. 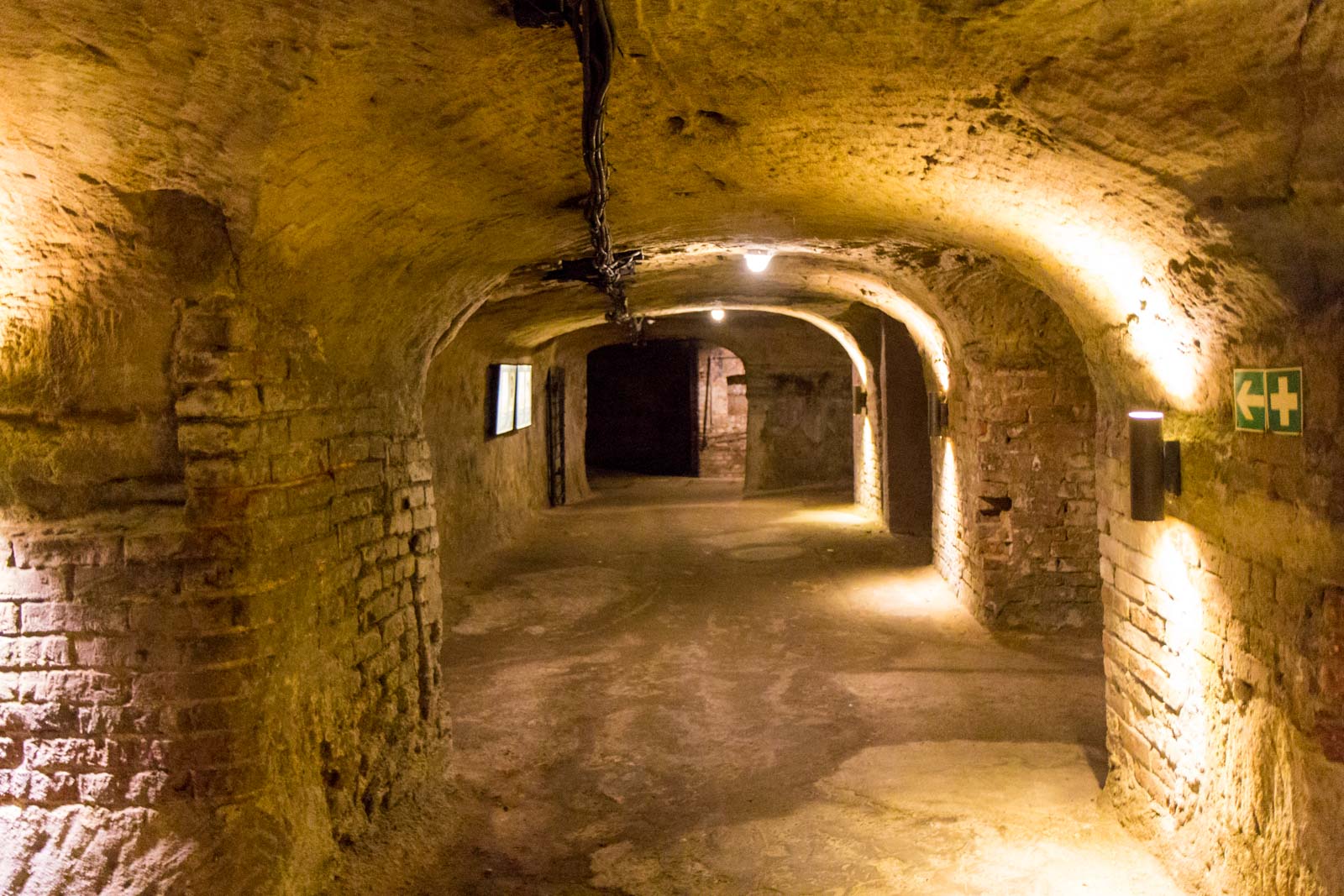 Of course, there are plenty of places to try the local beers and there are far too many to mention. For something a bit special, why not visit during the Old Town Festival when you can drink the beers in a mini version of Oktoberfest. It’s held every Autumn. 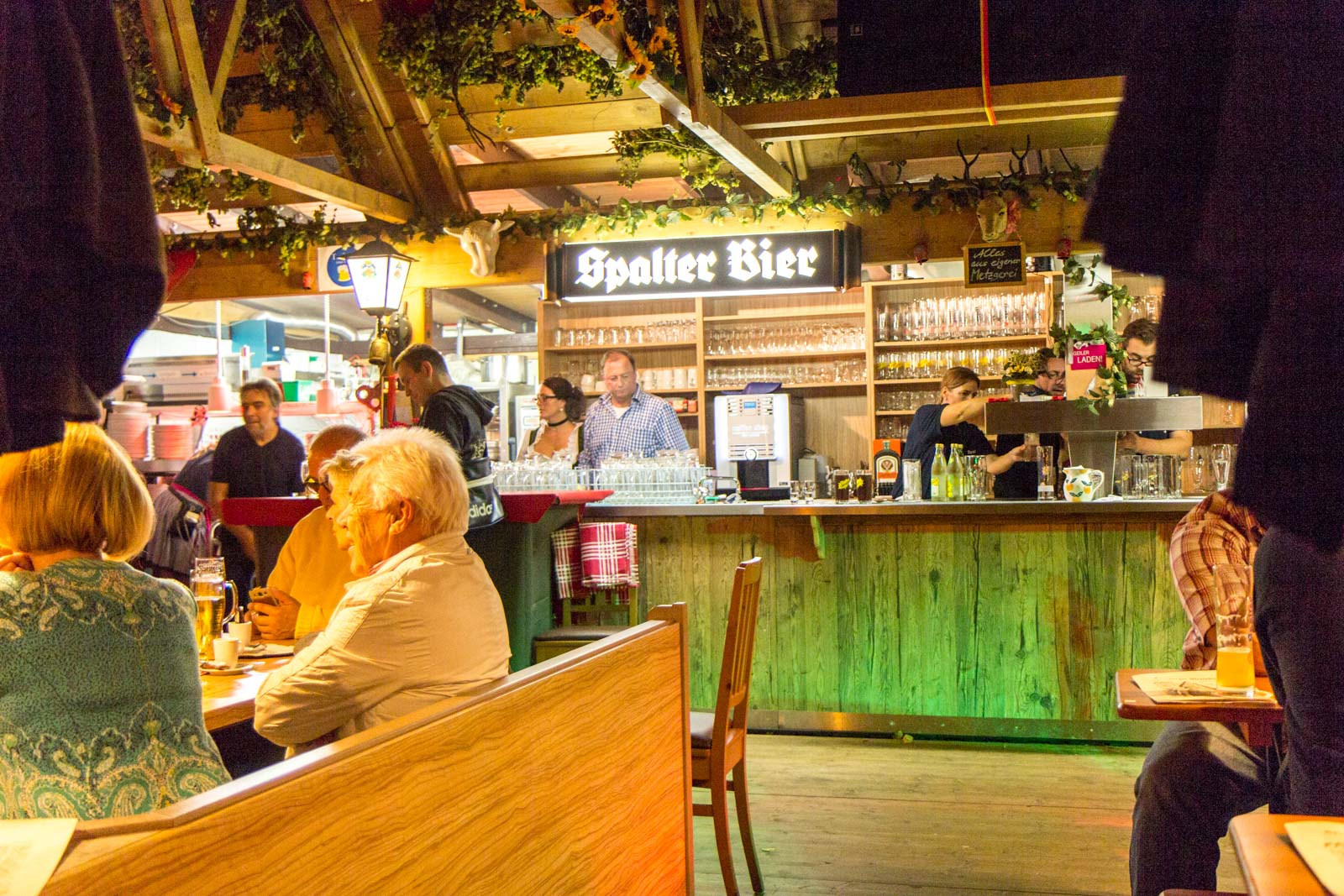 I really like Nuremberg – a city with a medieval past it’s proud of and a 20th century history it is ashamed of but recognises and talks openly about.

But, much more than that, it’s a city full of culture, food and drink that is easy to navigate and easy to get to. A wonderful part of Germany to spend a few days at any time of the year.

For accommodation, I suggest Sorat Hotel Saxx Nuremberg right on the main square