Ok, there’s nothing surprising about that statement. It’s like saying the French like their wine. But, much like the variety of wines in France, Germany has a huge variety of beers. And also a lot of different histories when it comes to making beer.

For Hamburg, for example, brewing is an extremely important part of its story and began many hundreds of years ago. Hamburg was once known as the brewery of the Hanseatic League, the alliance of powerful northern European cities that controlled the maritime trade between the 14th and 17th centuries.

When your clients are the richest people in the richest continent – you’re doing pretty well!

The first beers were being produced in Hamburg more than 1000 years ago but it was during these Hanseatic years the the industry really grew into its own. At the height of this period, there were more than 500 private breweries operating in the city.

Huge ships poured out of Hamburg’s port, full of barrels of beer. They took the strong amber drink to Belgium, the Netherlands, Scandinavia and the Baltic countries.

It’s estimated that during the 14th century, more than 10 million litres of beer was produced in Hamburg! Gradually the industry declined, though. By the end of the 17th century, it was a dire situation.

Beer was being produced in more places, schnapps was becoming more popular and even drinks like coffee and tea were taking a slice of the market. It was the end for Hamburg’s beer producers. It took a long time before the beer industry began to have a resurgence in Hamburg. It all began again at the end of the 19th century and in 1900 there were 15 breweries in Hamburg (a long way from that height of 500!).

Over the past century, small beer makers have come and gone, and the focus today seems to be on the craft beer market. Only the Holsten Brewery is doing any large-scale production. But don’t judge the city on the number of breweries because, much like 600 years ago, there’s a real emphasis on beer again in Hamburg.

If you’re interested in learning a bit more for yourself (and, of course, sampling some of the local brews), I would recommend the following three places:

This is by far the largest brewery in Hamburg and is the producer of the local beer – Holsten Pilsner, which is a pale lager. The production complex also makes the German beer Astra and produces the foreign beers Tuborg and Carlsberg for the German market. The Holsten Brewery in Altona has a production capacity of about 320 million litres and, when you see it for yourself, it’s not surprising. The great thing is that you can see the brewery for yourself.

There are regular tours that take you through many of the stages of production to see the inner workings firsthand. Most of it is done by computers and machines these days but it’s fascinating. Of course, a tour of the brewery would not be complete without a tasting and there’s plenty of time put aside at the end to try a few of the different beers that are made on the site.

The Ratsherrn Brewery is relatively and only opened in 2012 in the Schanzen-Höfen part of Hamburg. It is a craft brewery and places a real emphasis on the taste of its small range of drinks.

Although they say they are influenced by the tradition in Hamburg, they have also taken modern inspiration from countries like the US, Denmark and Italy. There are about half a dozen regular beers made by Ratsherrn plus seasonal varieties. It’s all done in a relatively small room that has a glass wall that you can see into it through.

If you want to get beyond the glass wall, never fear, you can also arrange tours by contacting the brewery directly. For most people, though, it might be enough just to go and taste the beers on offer. As part of the Ratsherrn Brewery is a very cool pub with indoor and outdoor areas to relax and have a couple of drinks.

For something a bit more traditional, it is worth checking out the Joh Albrecht Brewery on the canal right near the Town Hall. This is a small business that seems like a pub from the outside.

In fact, it really feels just like a restaurant. The giveaway that it’s also a brewery are the large metal vats above the bar at the entrance. 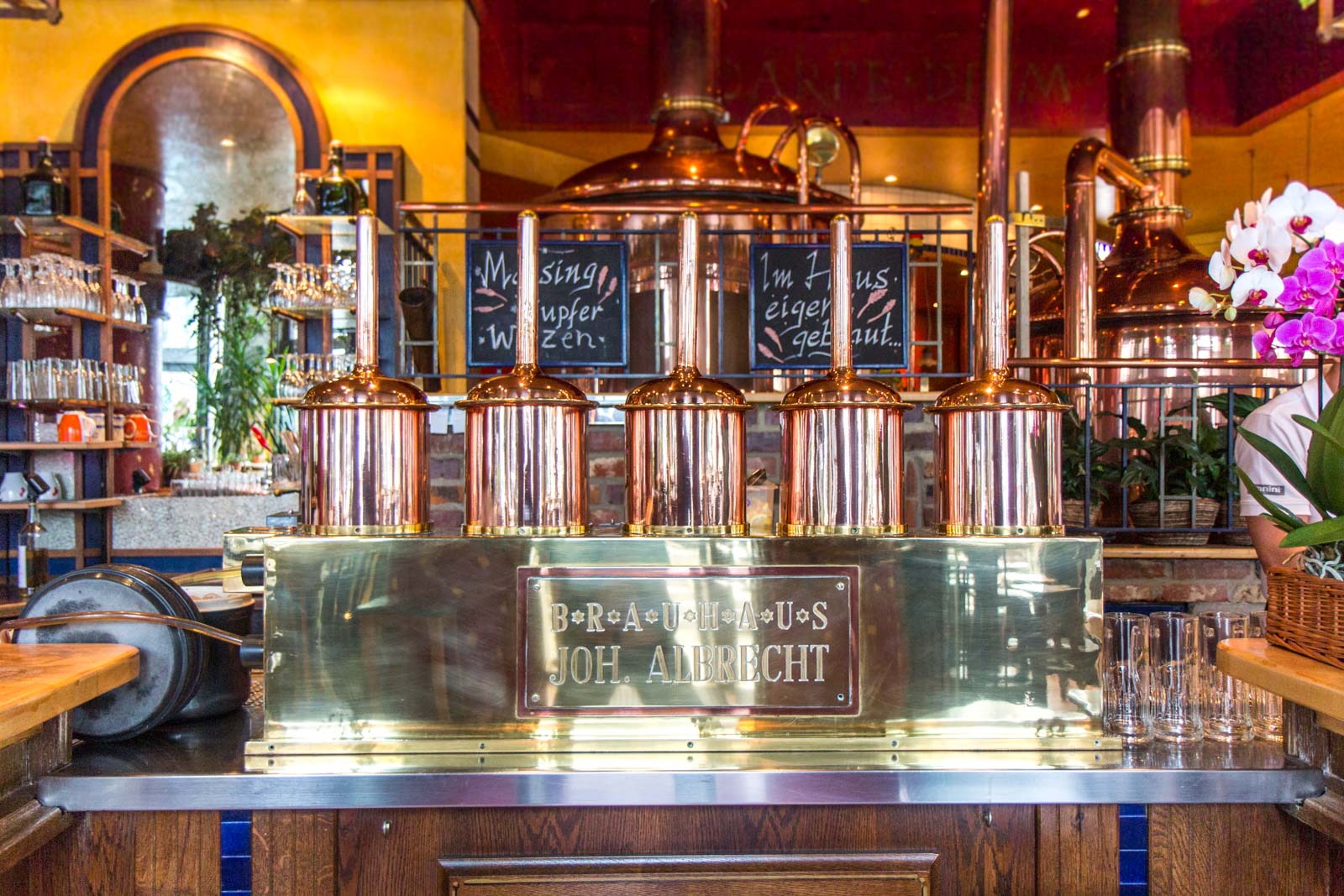 The food here is great and I can highly recommend the schnitzel. There are no tours and there’s not much information about the brewing process – although you can, of course, ask the staff there if you have any questions.

Instead, I think this is a good place just to relax for a little while and get a delicious local meal with some excellent beer. I hope all of the helps your hunt for some local beers in Hamburg. If you would like to learn more, I recommend this guided tour of Hamburg’s beer scene!

For super cool accommodation, I suggest the East Hotel in St Pauli.