If you’ve been following my stories about New Orleans, you’ll know that I’ve written a few things about how the city has changed since Hurricane Katrina ten years ago.

There has been the physical recovery, still not finished, which has relied on volunteers in recent years to get houses back to a state where they are liveable.

>> Read my story about the New Orleans recovery

There has been a rejuvenation in the city’s arts scene with a new focus from outside and an influx of young artists who are bringing fresh ideas. (You can read my story here about the new art scene in New Orleans.)

And there’s also been a transformation in the restaurants with new styles of cuisine gaining in popularity, chefs moving from interstate, and some really exciting new dining options. (You can read my story here about the best food in New Orleans.)

But it’s not just particular cultural aspects that have changed in the past decade. Entire neighbourhoods are also changing.

Some might call it gentrification – and that wouldn’t be an inaccurate description – but I feel it’s a bit more complicated than that.

From speaking to people, there’s a feeling that New Orleans had become stagnant and there was little change before Katrina. Although the natural disaster was horrific, it has led to some reassessment and certain parts of the city have used the opportunity to adapt to modern trends. 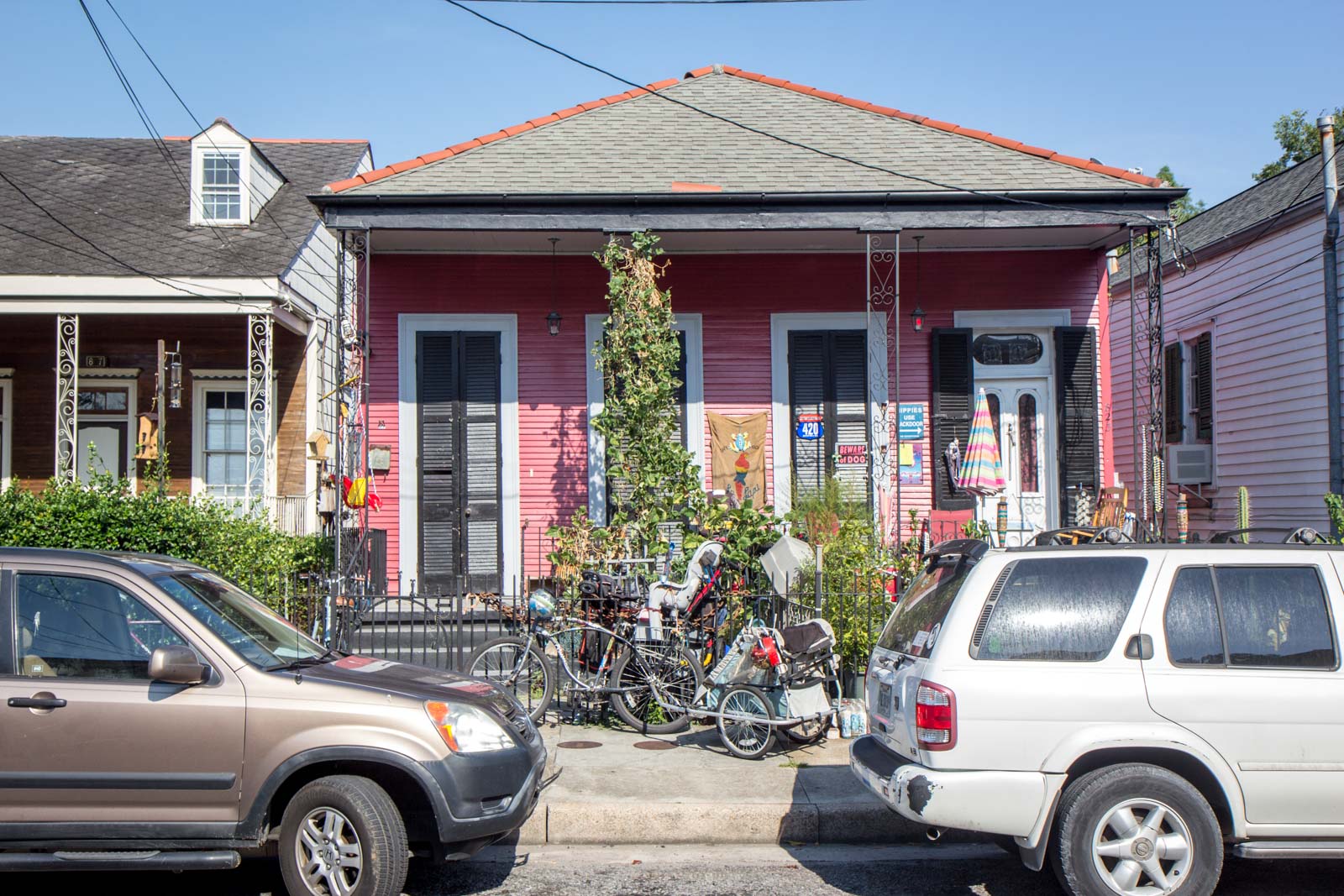 I think the most obvious example is in a neighbourhood called Bywater, which has been described by some people as “contemporary bohemianism”.

I would put it more simply, and call it “hipster”.

Even before the devastation of 2005, artists and ‘bohemians’ had started to move into Bywater, drawn by the cheaper rent and the proximity to areas like the French Quarter. (Bywater is only about a 15 minute walk east from the edge of the French Quarter.)

In the early days, it was probably harder to notice the trend and the small businesses in the area gave no indication of the new residents.

In recent years, though, you can see in the style of cafes and shops that have opened that this is a hipster town… sorry, a contemporary bohemian town. 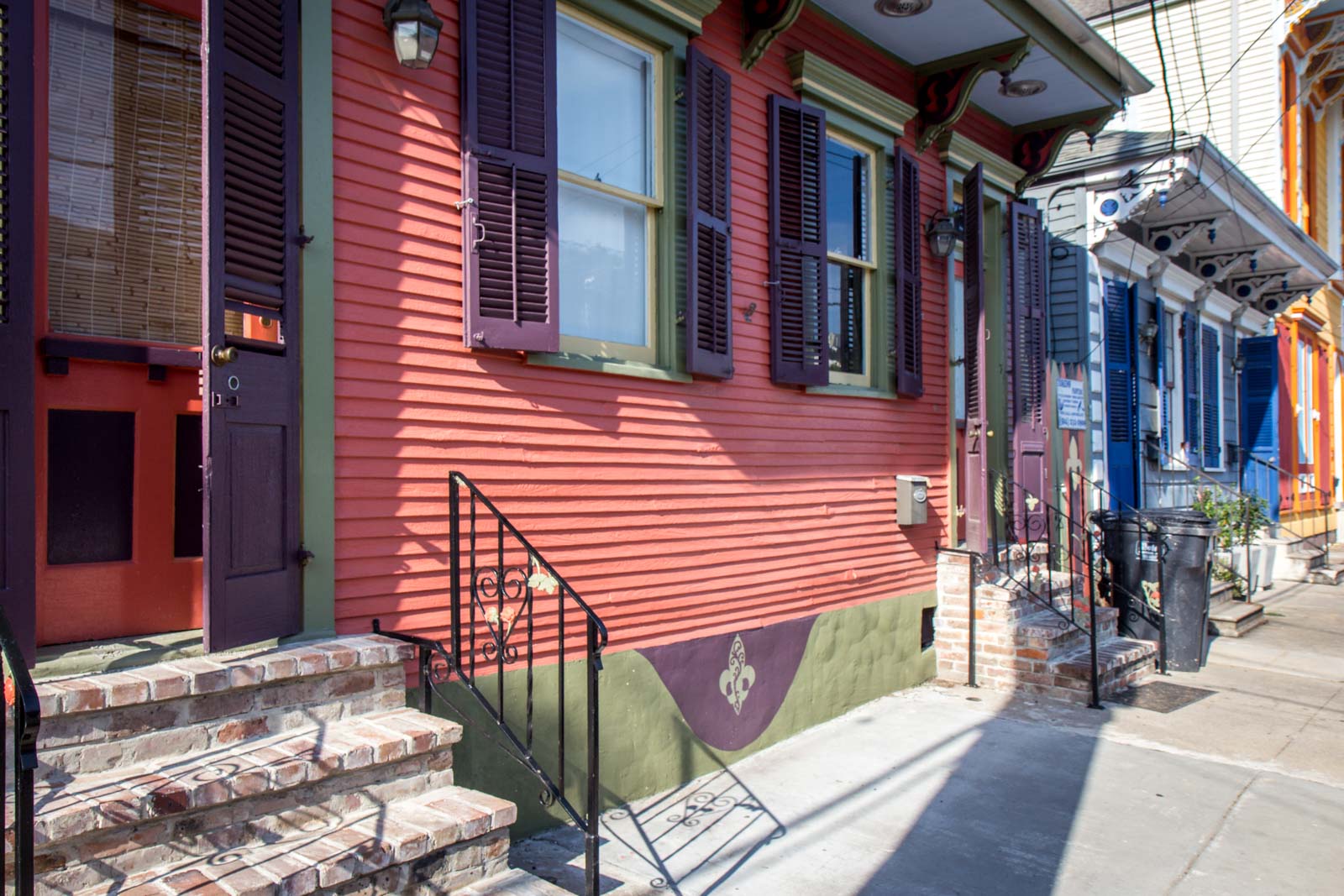 The architecture of the houses hasn’t changed and the low level building with French or Spanish styles and Caribbean colours are beautiful. There’s so much vibrancy when the sun is out.

There are definitely still blocks that feel a bit rundown but you can also see that many of the houses have been refurbished, perhaps because there’s now a bit more money in the area – or maybe it’s just a bit more pride.

I don’t think the average tourist would venture to the Bywater – there’s enough to see in the French Quarter and the surrounding areas. It’s not famous and there are no landmarks, as such.

But one afternoon I go for a walk to the neighbourhood and spend a good few hours exploring it, stopping at a couple of cafes, and chatting to some of the local residents. 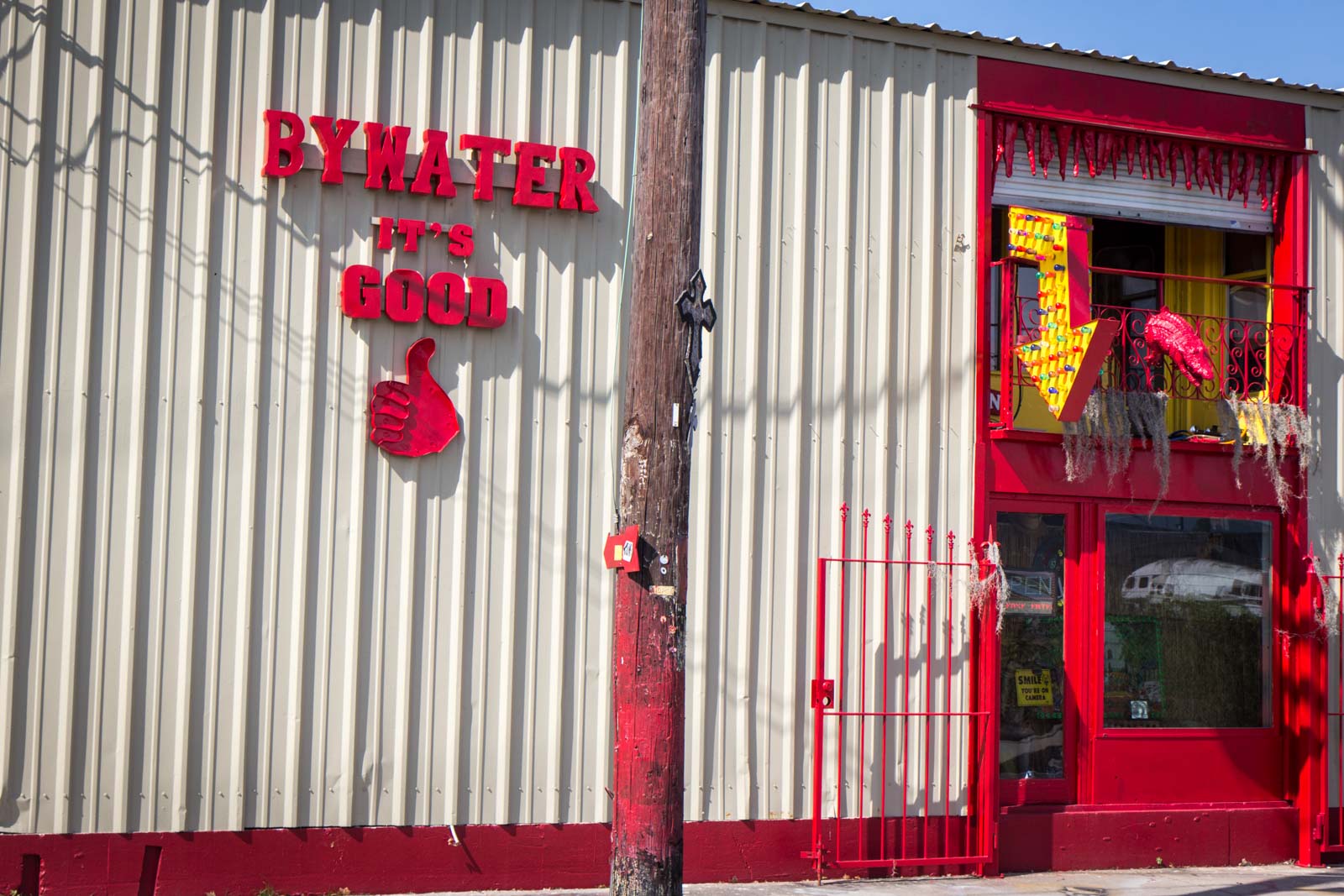 There’s a relaxed vibe. It’s certainly a lot less crowded than the French Quarter and the life seems a little slower here – which is saying something for Louisiana.

It’s slightly artistic without being pretentious but still has a suburban community feel that you might lack in places like Shoreditch in London or Williamsburg in New York.

If you do make it to Bywater yourself, you might be wondering what there is to do. I’ve put together a short list of some of the places I found that I thought were quite cool and fun.

Here are some of my suggestions of what to see in Bywater in New Orleans:

It’s pretty obvious that there is a very unique style to all the work here at Dr Bob’s Folk Art (3027 Chartres St) and there is a lot of it. There are plenty of things on display in the gallery and, because it comes in all shapes and sizes, you should even be able to find something to fit in your luggage. It's worth a look around and a chat with the people working there. 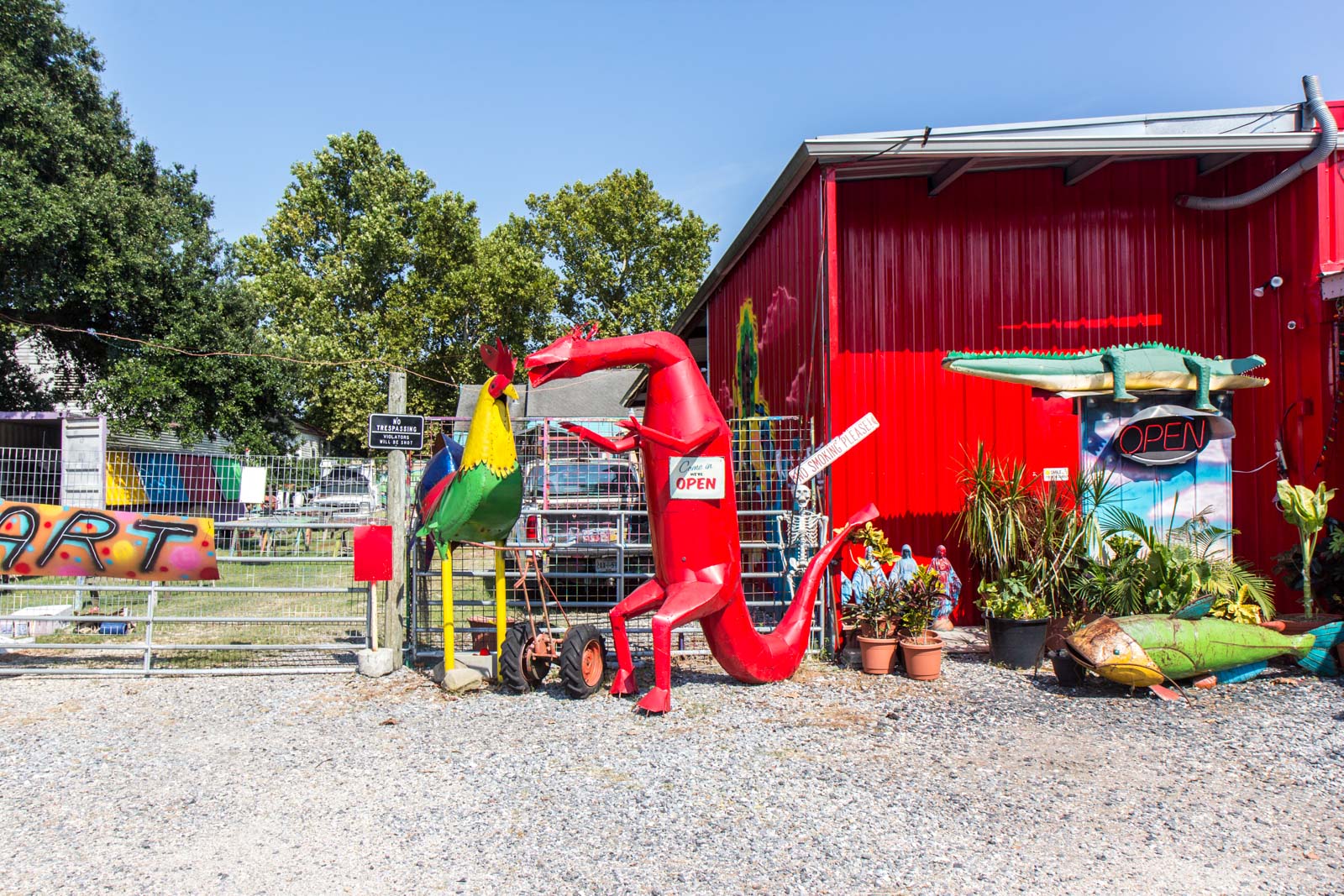 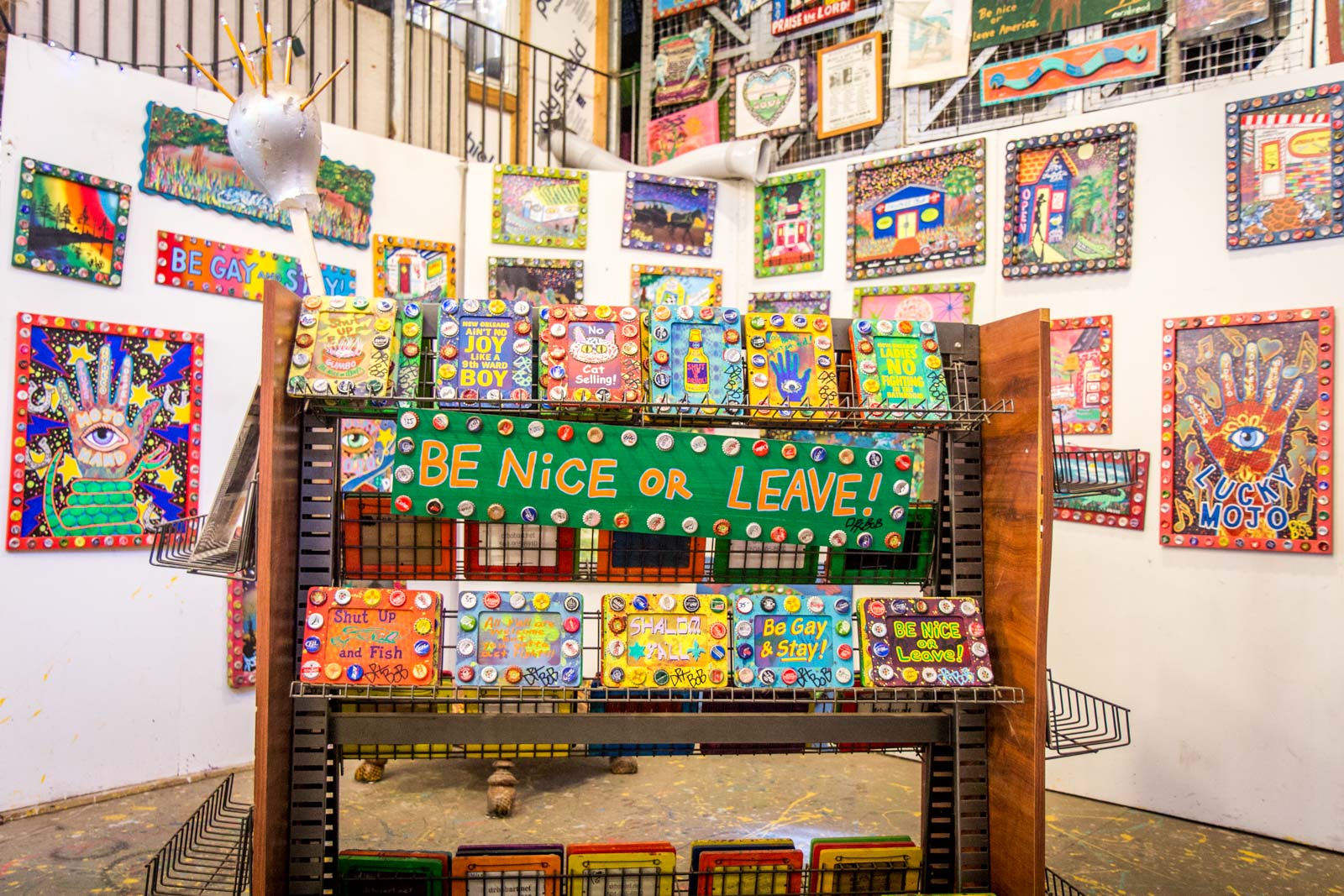 You know that you’re in a trendy neighbourhood when there’s a record store and Euclid Records (3301 Chartres St) is a fantastic one. There are two levels here with records sorted into genre.

If you’ve been looking for something in particular, it’s worth trying here, or just have a look around for a dose of nostalgia. 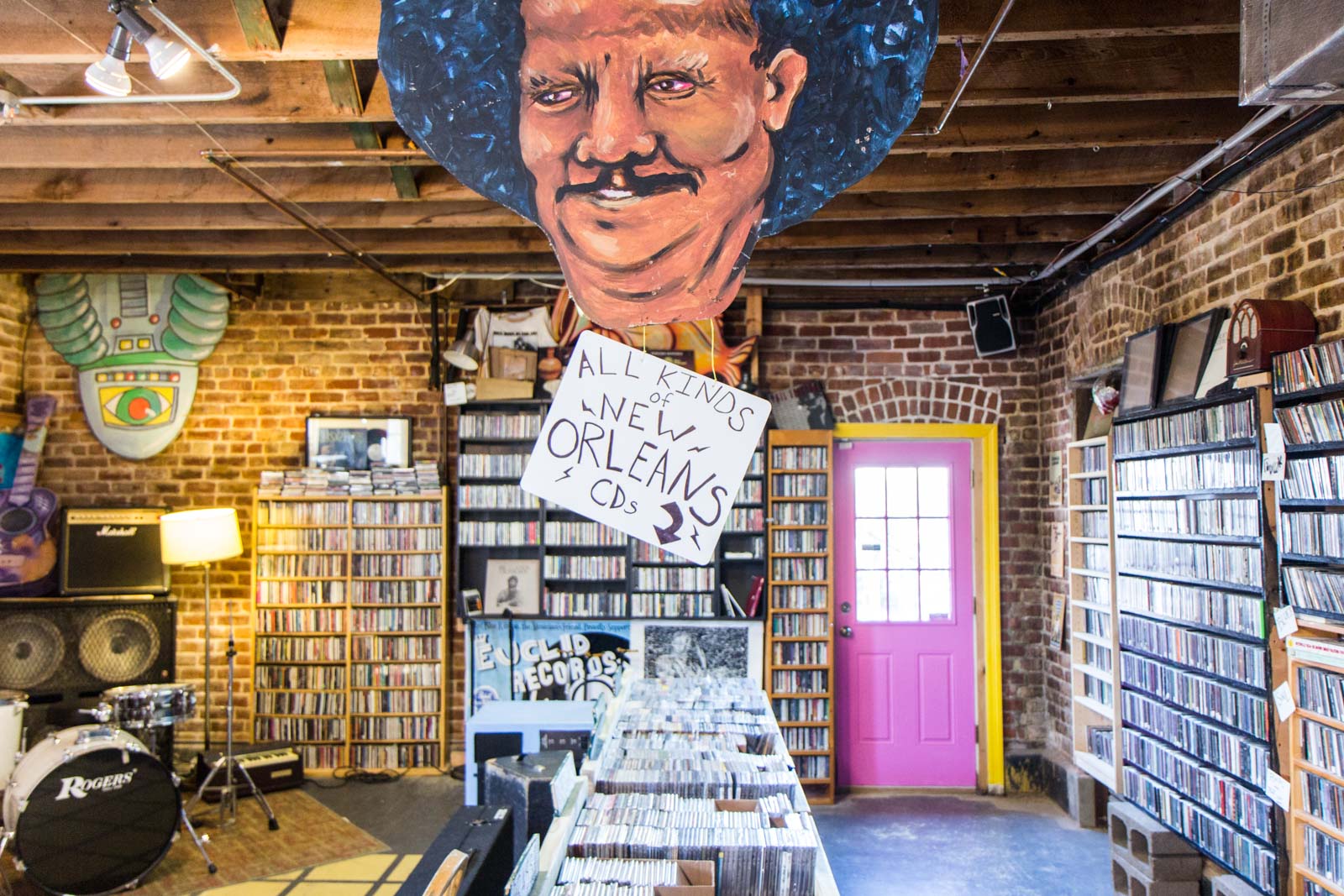 Across the road from the record store is Crescent Park, which was opened in 2006 after redevelopment. It stretches along the Mississippi River for about 2.2 kilometres and has facilities for joggers, cyclists and dog walkers.

The idea behind the park is to create a space for the community to gather, to make Bywater an even more popular part of the city. It’s also just a really pretty park, I think! You may be lucky, you may not. The Old Ironworks (600 Piety St) is, as the name suggests, an old factory that has been turned into a community and arts space. So there are lots of events that happen here, including a monthly flea market.

There is a little cafe called Snoballs that is open most days, otherwise you might want to check a New Orleans events listing to see if there’s something on when you’re in town. 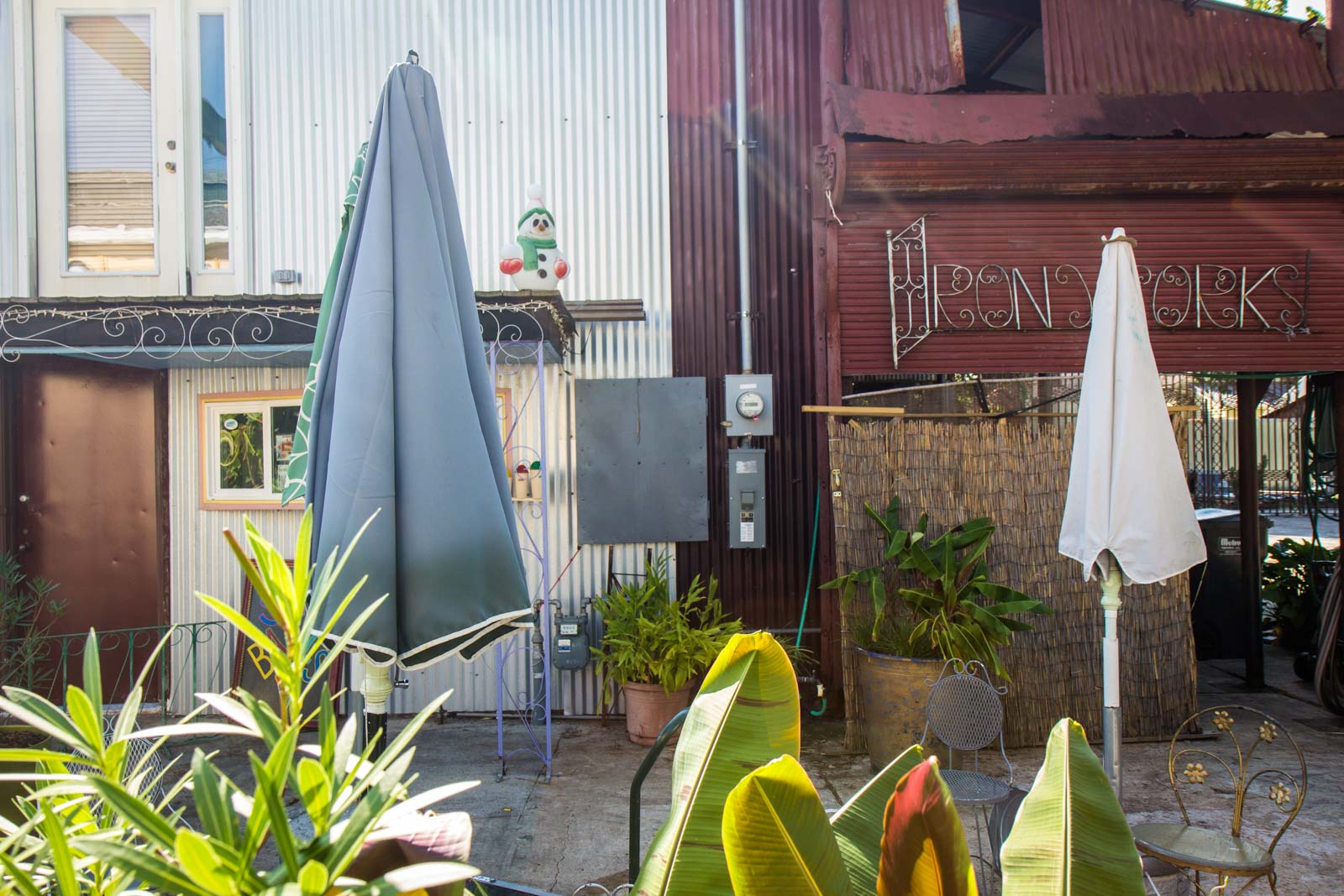 Even from the outside, you can tell that Porché West (3201 Burgundy St) is not a typical gallery.

Most of the works here focus on people and the idea is to find the common elements that bind everyone together. Some of the photos have been taken in New Orleans but there are others from around the country and the world. 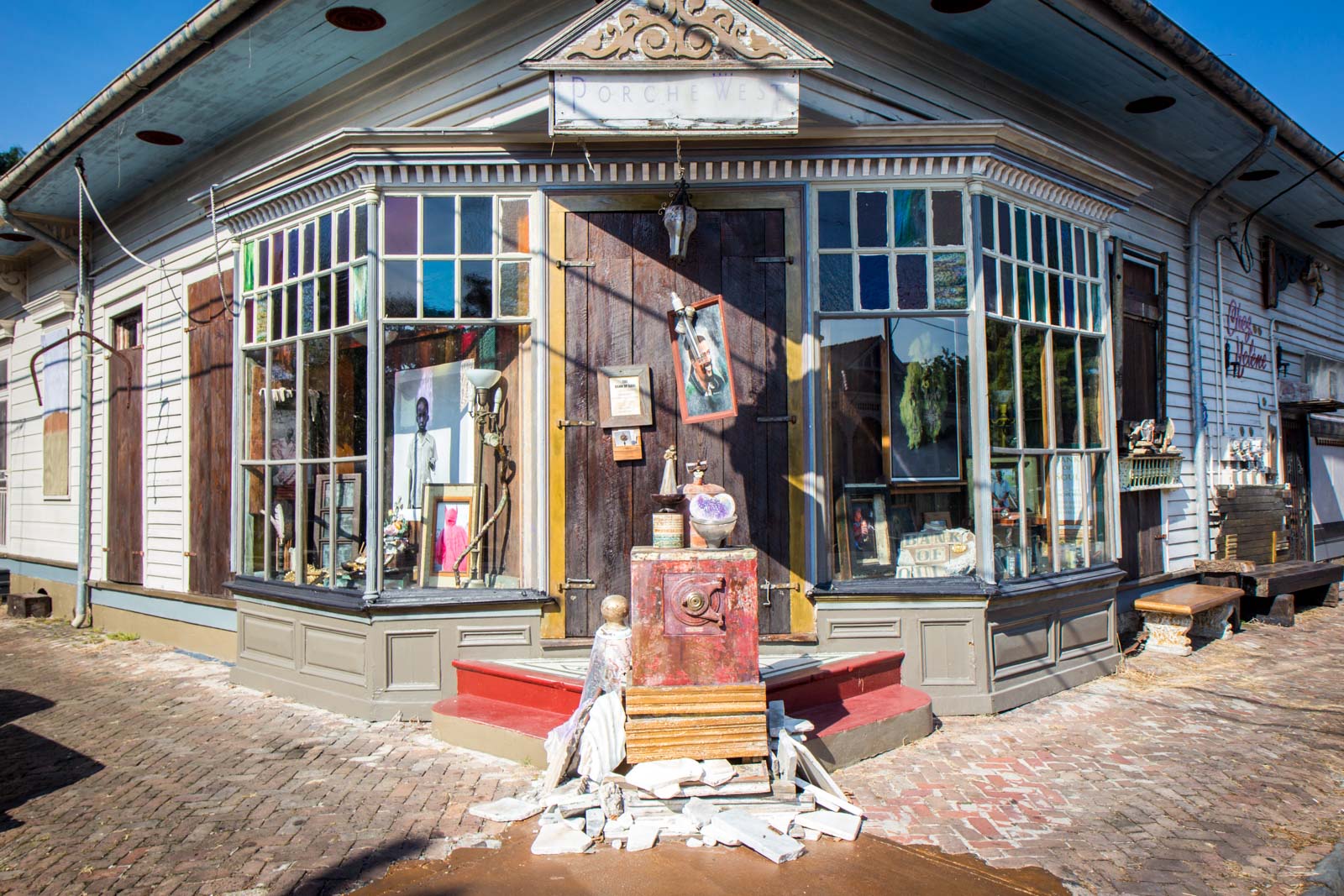 Perhaps shopping is your thing – well the Bywater has a very cool little boutique shop for you called Bon Castor (3207 Burgundy St). It’s right next to Porché West and specialises in little things like soaps, cards, journals, pillows and purses.

And finally, if you’re feeling a bit hungry after all that exploring, a great place to stop for a drink or a bite is Satsuma Cafe (3218 Dauphine St). There’s a really chilled vibe and the emphasis is on local and organic ingredients.

As the owners put it, there’s no high-fructose corn syrup here! The hipsters have truly taken over. 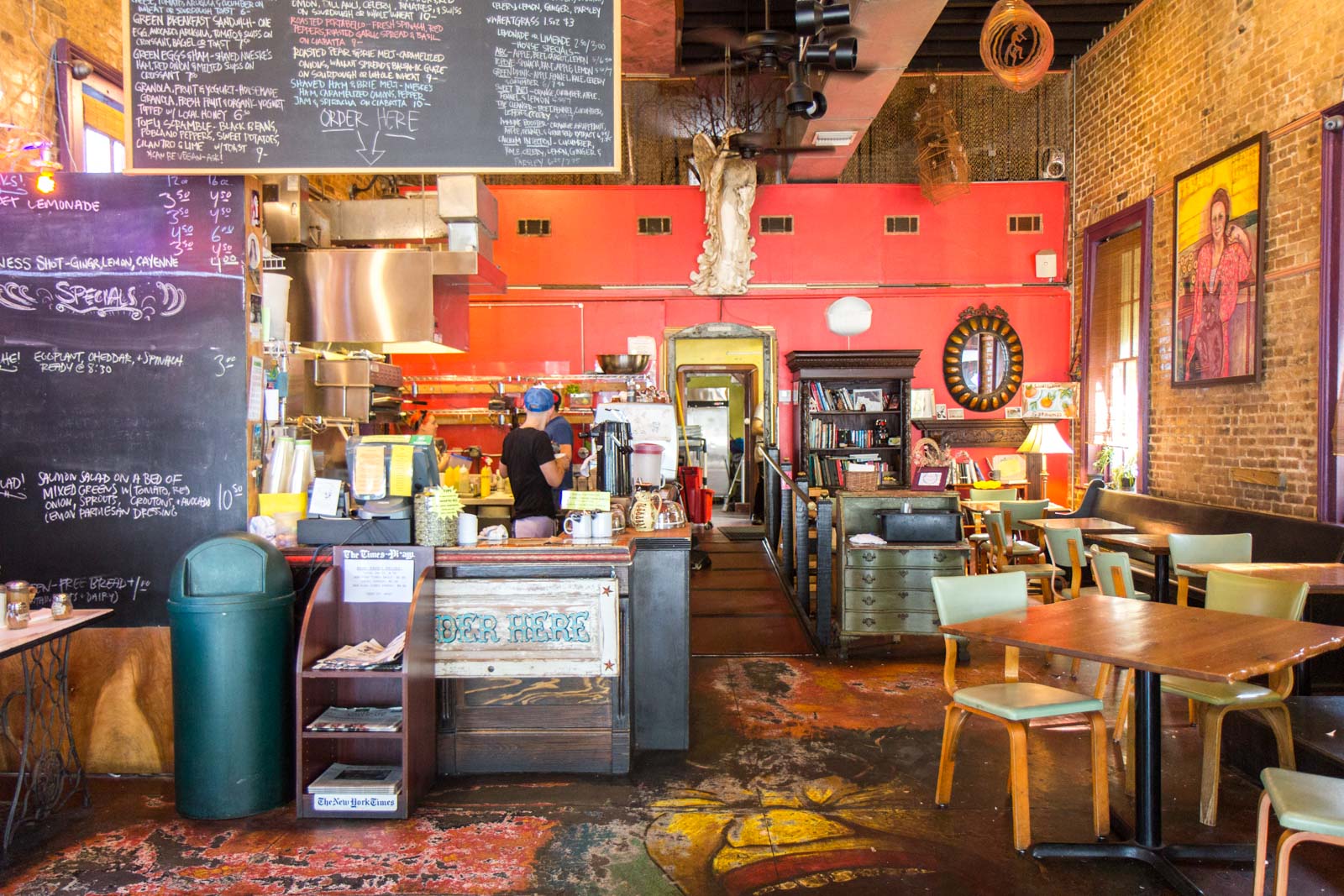 If you’ve been to Bywater yourself – or even live there – I would love to hear any other suggestions you might have.

Please feel free to drop a note in the comments section below with any other places you would like to have seen on the list.