Things to do around Almaty, Kazakhstan

If you don’t know much about Kazakhstan, there’s one thing you need to know. It has some incredible landscapes.

In my last post, I told you a bit about the country’s largest city, Almaty. It’s a relatively modern city with a vibrant social scene and a fascinating collection of history.

But getting out of the city, exploring the countryside, is one of the best things you can do.

Let me start my whetting your appetite. Check out a couple of photos I took on the road when I was exploring the region around Almaty. This is how it normally looks: 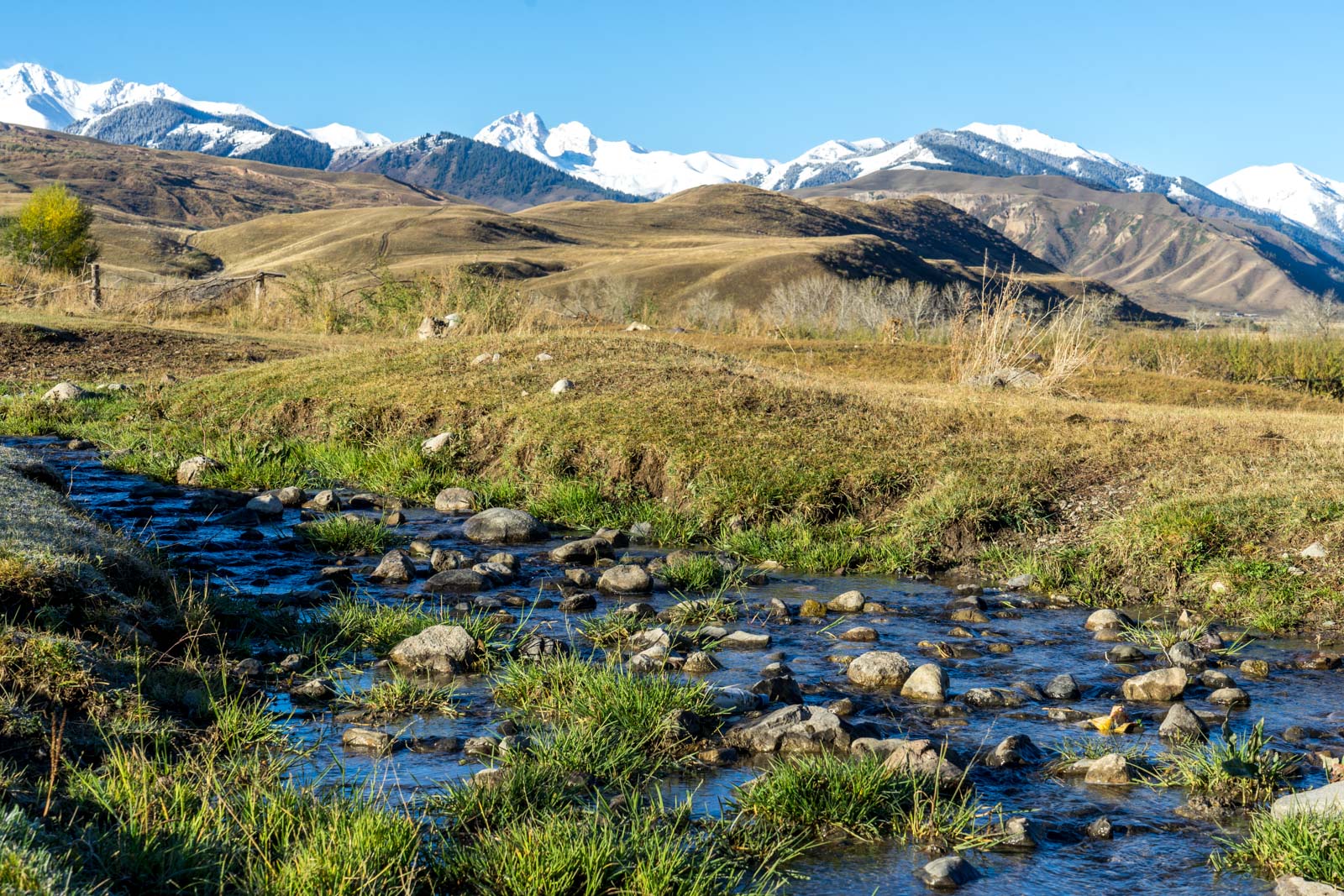 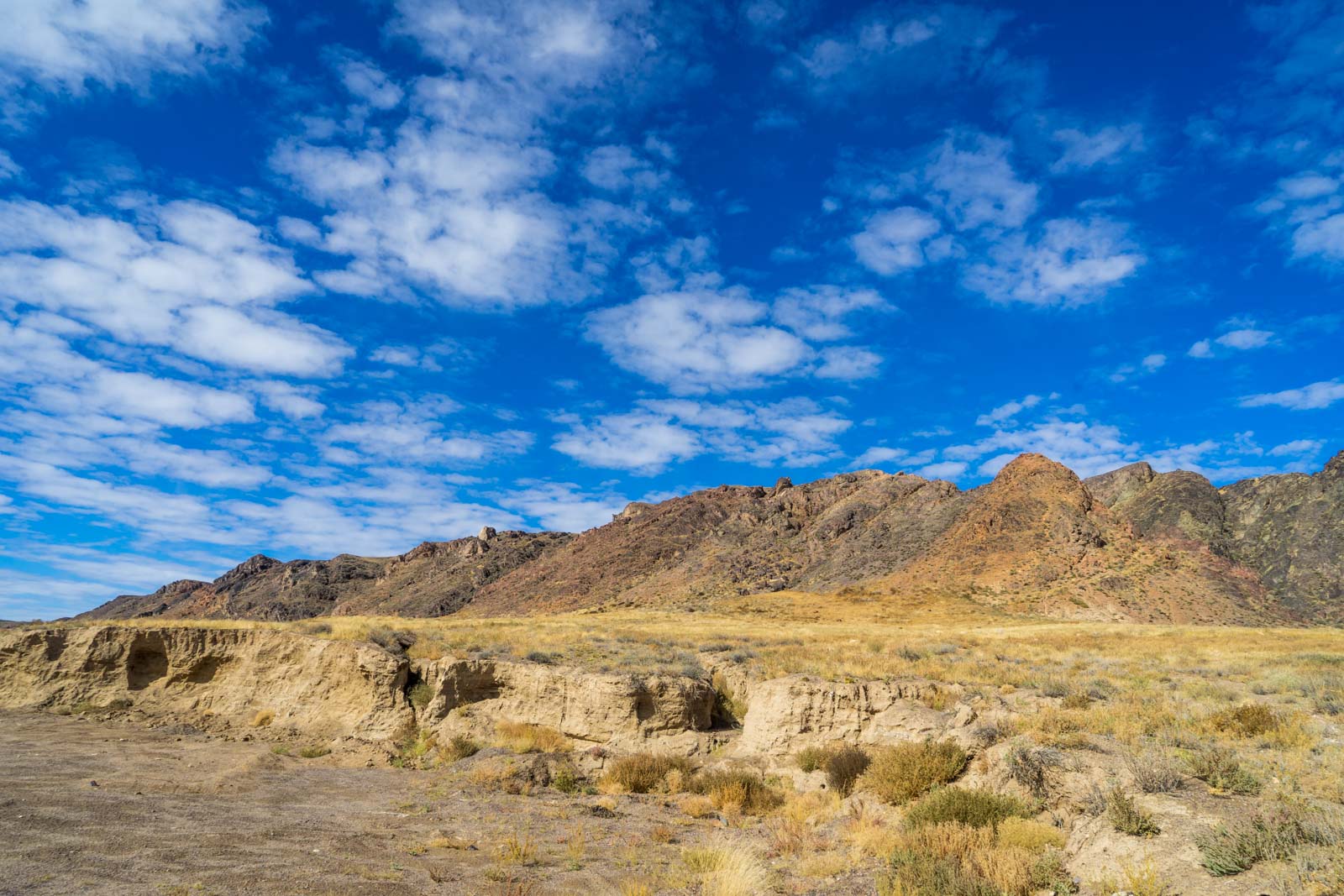 I say ‘normally’ because the first day I set off from Almaty, the weather is not behaving. A wet morning, grey clouds creating a gloomy light, a temperature drop that has me digging in my bag for my jacket.

I am hopeful that it will improve but, when I stop an hour into the trip at a small village for a break, I’m dodging puddles in the muddy ground and lowering my expectations. 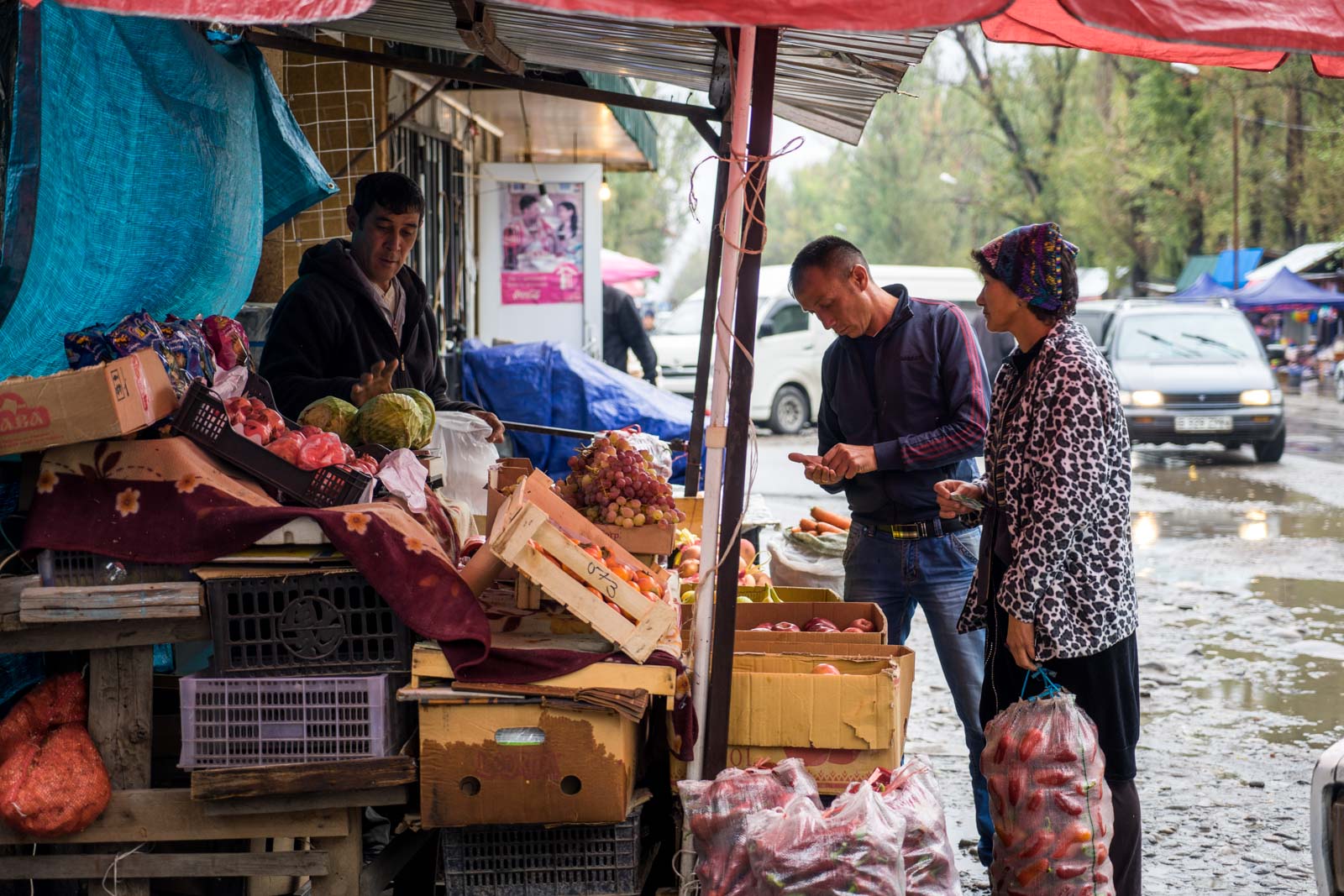 There are a few destinations in the plan for the day and the first main stop is Charyn Canyon.

It’s often referred to as the Grand Canyon of Kazakhstan because, although it’s not quite as large, it’s considered to be just as impressive.

90 kilometres long and up to 300 metres deep, it creates a series of beautiful rock formations. 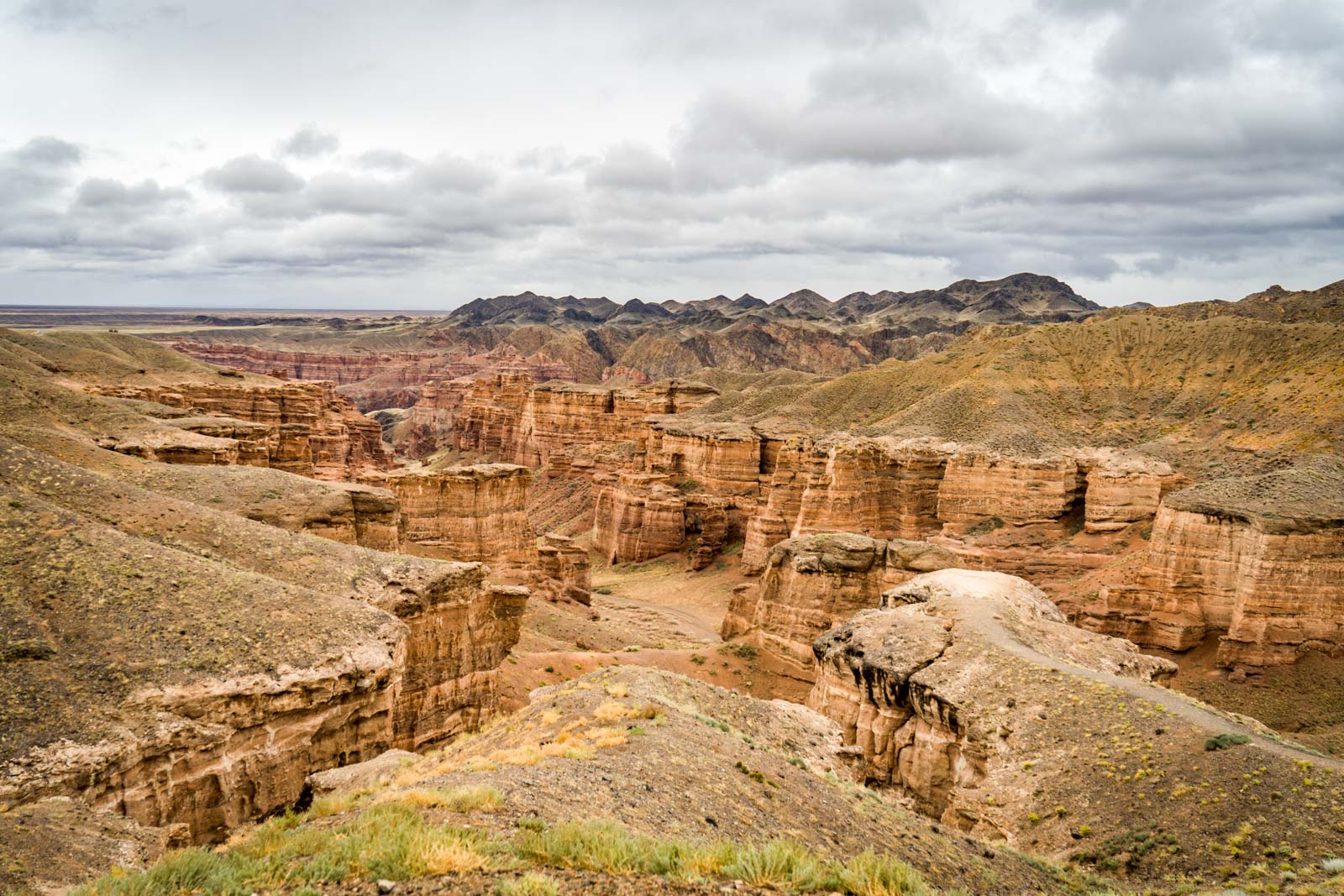 Usually you would be able to explore it in great detail – hiking from the top, down to the riverbed and along the path between the sheer cliffs. There are plenty of different trails to take and it would be easy to spend the whole day here.

One of the highlights is the Valley of Castles, named so because the orange rocks look like fortresses on hills.

For me, though, it isn’t just the clouds and the temperature which are the problem. It’s also the wind. It has picked up and is gusting around quite strongly.

As I walk out on one of the ledges at the top to take some photos, I’m worried its strength would push me off. I am restricted to the viewpoints higher up. 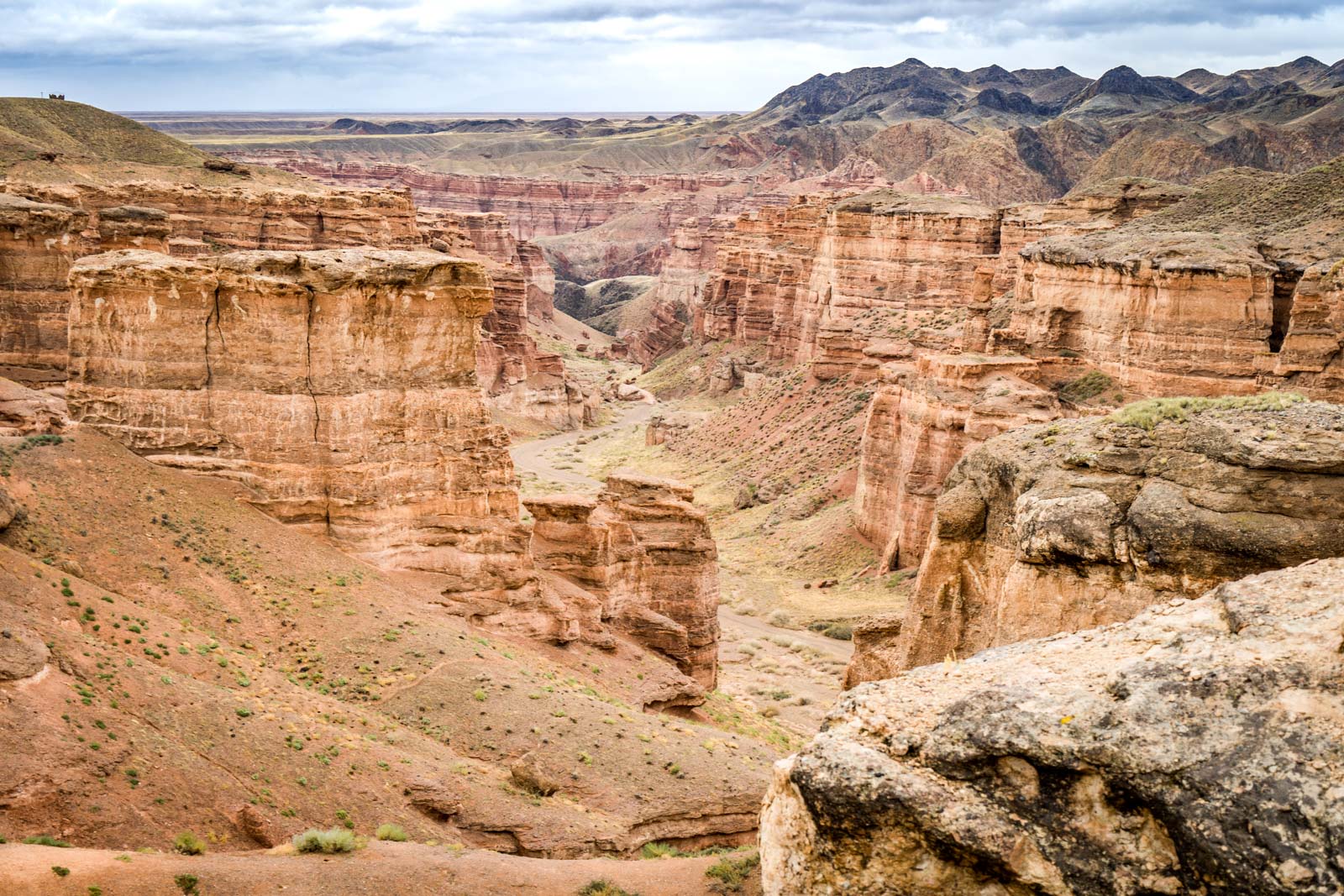 The sky is looking even more ominous as I leave the canyon and, as it turns out, it follows me all the way to the next destination at Kolsai Lakes.

This is where I will spend the night and I’ve arrived early enough to do some hiking. At least, that was the plan.

Arriving at the accommodation, I can see one of the lakes beneath, surrounded by incredible mountains. It’s just the kind of place you would want to explore – walk for hours along trails that lead you past water, through forests, up slopes.

But it’s getting colder and darker… even though it’s still only mid-afternoon.

Soon the snow arrives. Gentle at first, a light dusting that seems to materialise out of thin air. Then it gets heavier and starts to come down in sheets. Any outdoor plans are off. 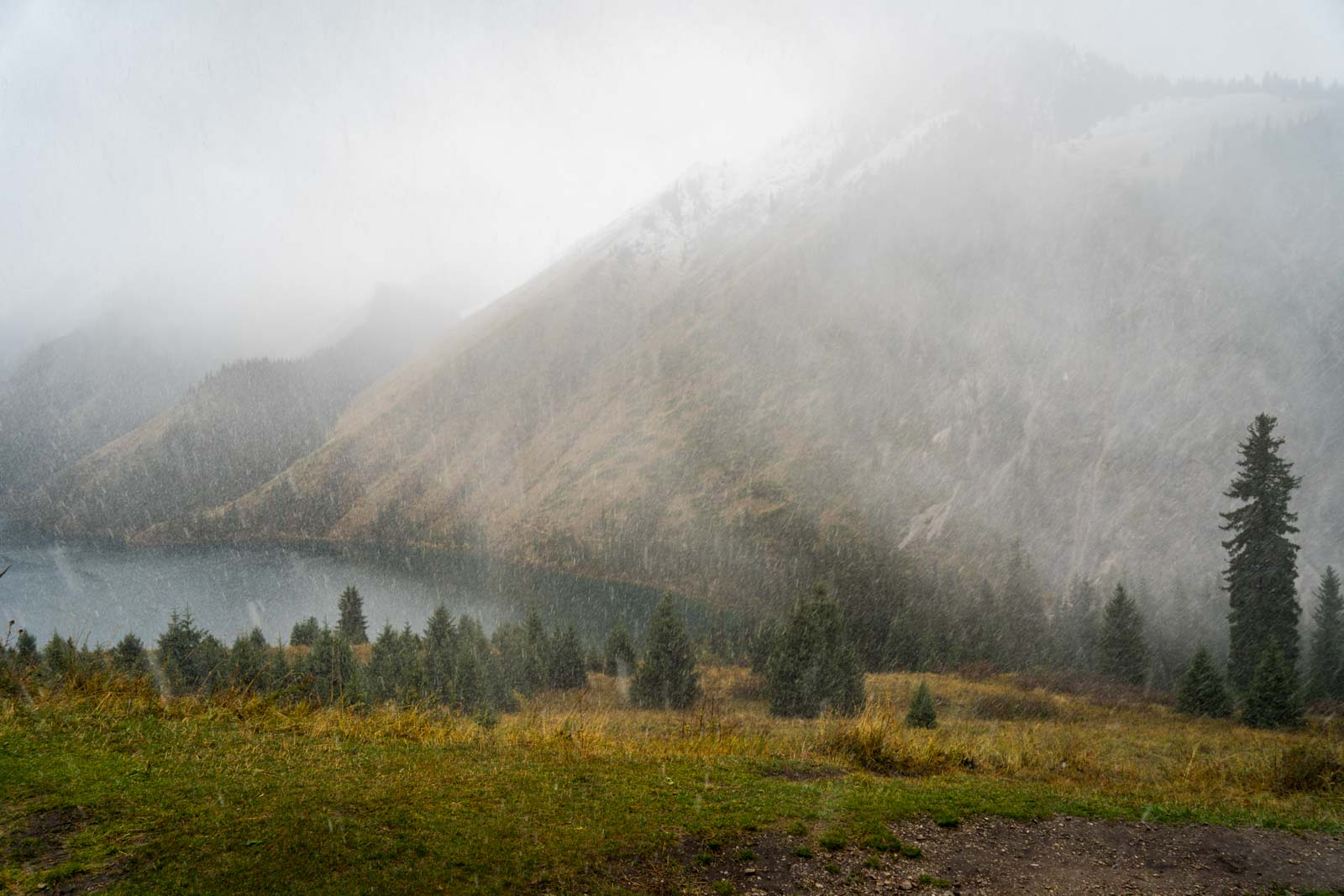 The Kazakh owner has some local friends staying with him and a few of them speak English very well. They invite me inside to join them.

A shot glass quickly appears in front of me. It’s filled up with vodka just as fast. We are all toasting each other before I even sit down.

As is the Kazakh way (I’ve learned the hard way), my glass is filled up immediately. Another toast will come soon and I’m now committed. It would be rude to leave, even if I wanted to (which I don’t).

The guys have instruments – a guitar and drums – and they are playing music and singing. Suddenly it feels warm inside as the snow continues to fall outside.

They tell me about their lives, ask me questions about why I’m in Kazakhstan… and they keep the drinks coming. 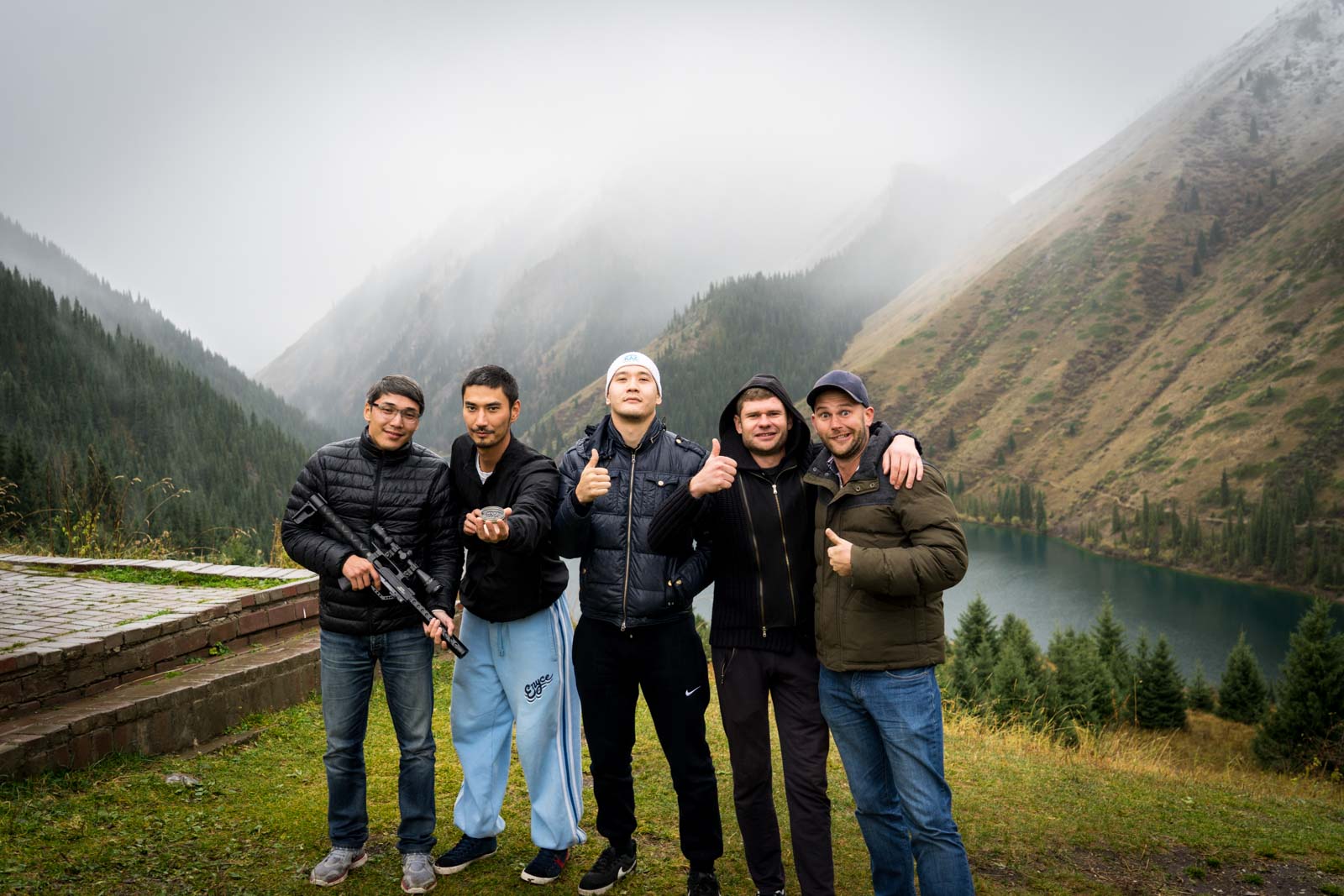 When they’re worried that I’m getting bored (I’m not), they suggest we go out shooting. There are rabbits and birds in the area that we can use as targets, apparently.

It’s not the kind of thing I really enjoy and I’m worried that it might not be wise for any of us to handle a gun, considering how empty the vodka bottle is now looking. They don’t press the point.

I appreciated the thought, though. Clearly they were just trying to make me feel welcome… in a uniquely Kazakh way. 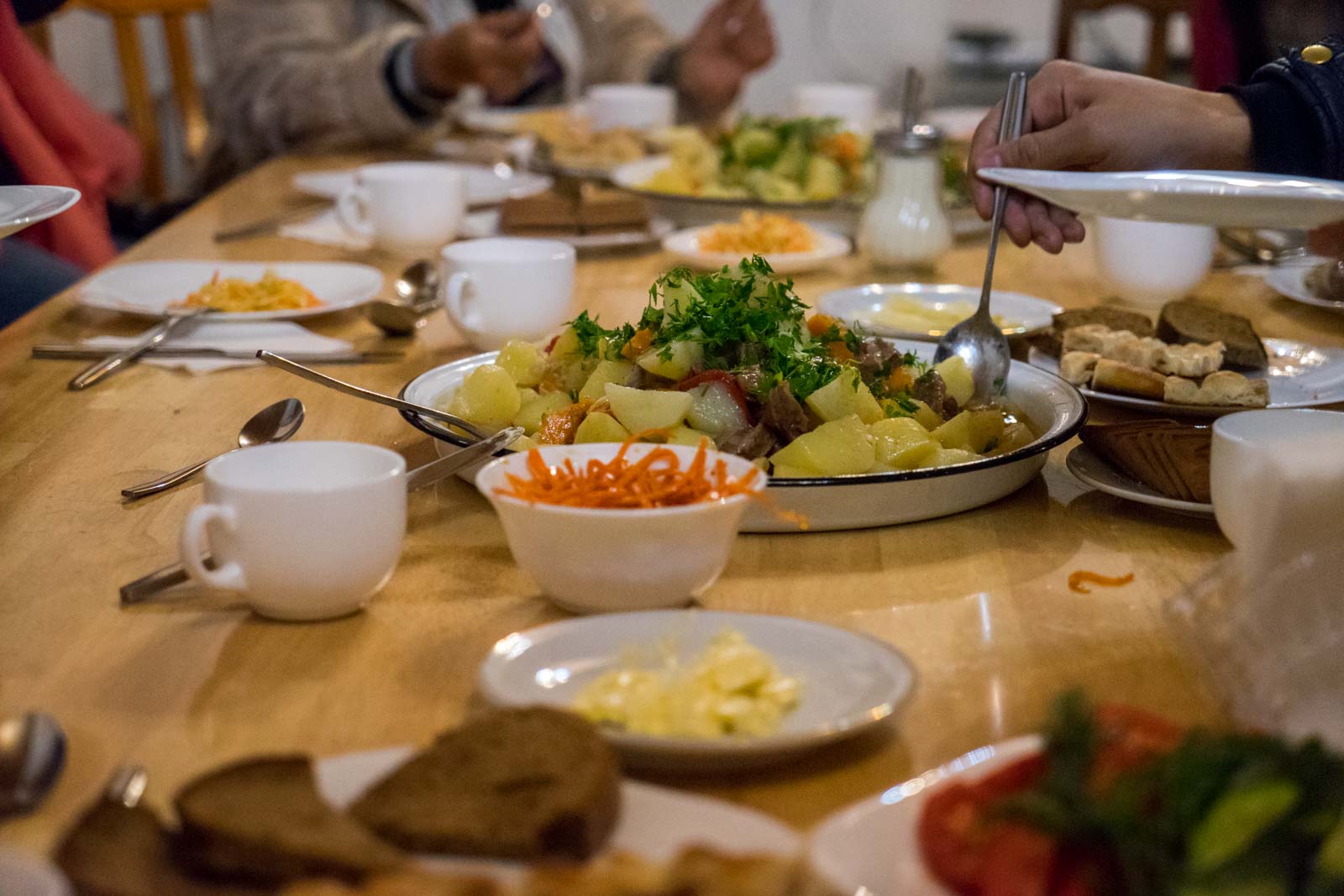 Dinner comes and goes and I make my way to bed – probably earlier than usual but it feels like it has been a long afternoon.

I may not have seen the parts of Kolsai Lakes that I wanted but I get the sense I saw an authentic part of the country in my new friends.

It’s an early start for me the next morning, my alarm going off before the sun has risen. A long afternoon of vodka is quickly recalled as the room spins slightly.

Perhaps this is also an authentic Kazakh experience. There’s no time for self-pity because I need to get on the road again.

Packed and outside, the day begins to get lighter and I can see that the clouds have all gone. I need to walk down to the lake and along the shore to leave.

The ground is icy but finally I get to see what was obscured by snow for most of the previous afternoon. 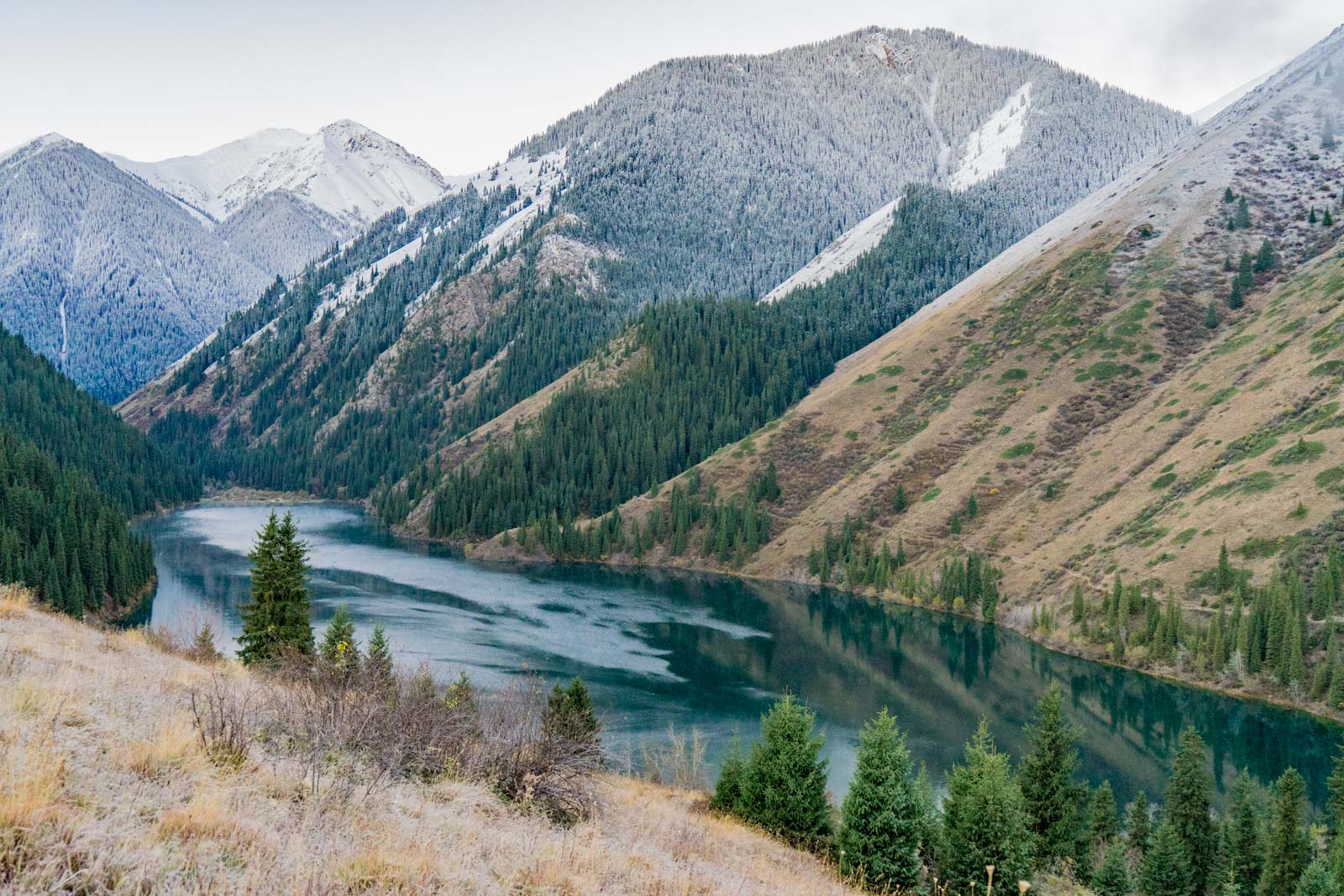 There are three lakes that make up the Kolsai region.

This is the lowest one at 1800 metres above sea level and is the only one that has road access. The other two are at 2250 metres and 2700 metres. To get to them you need to hike or take a horse.

As you can see in this photo, it’s a stunning place and is popular with visitors because of how beautiful it is.

The first lake is often included on short tours from Almaty, although it doesn’t feel too busy and there is no major tourism development other than my hotel and other small guesthouses. 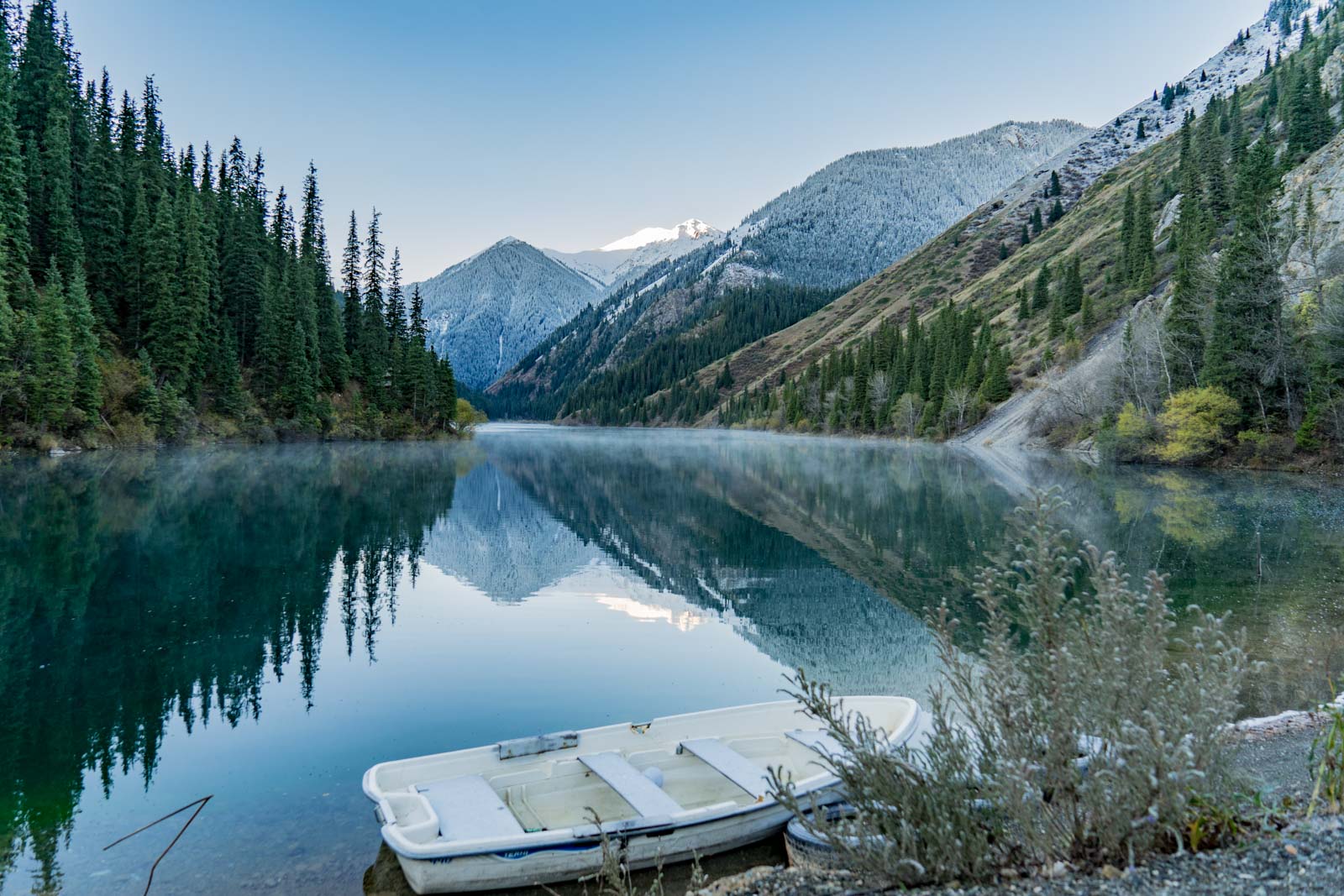 The road from the lake to the nearby village where my bus is offers more views. This is a part of Kazakhstan where water is usually not a concern, the crops are green and the livestock well fed.

The mountains in the distance, white snow on top, waiting to melt and run down to the plains, are encouraging for agriculture. 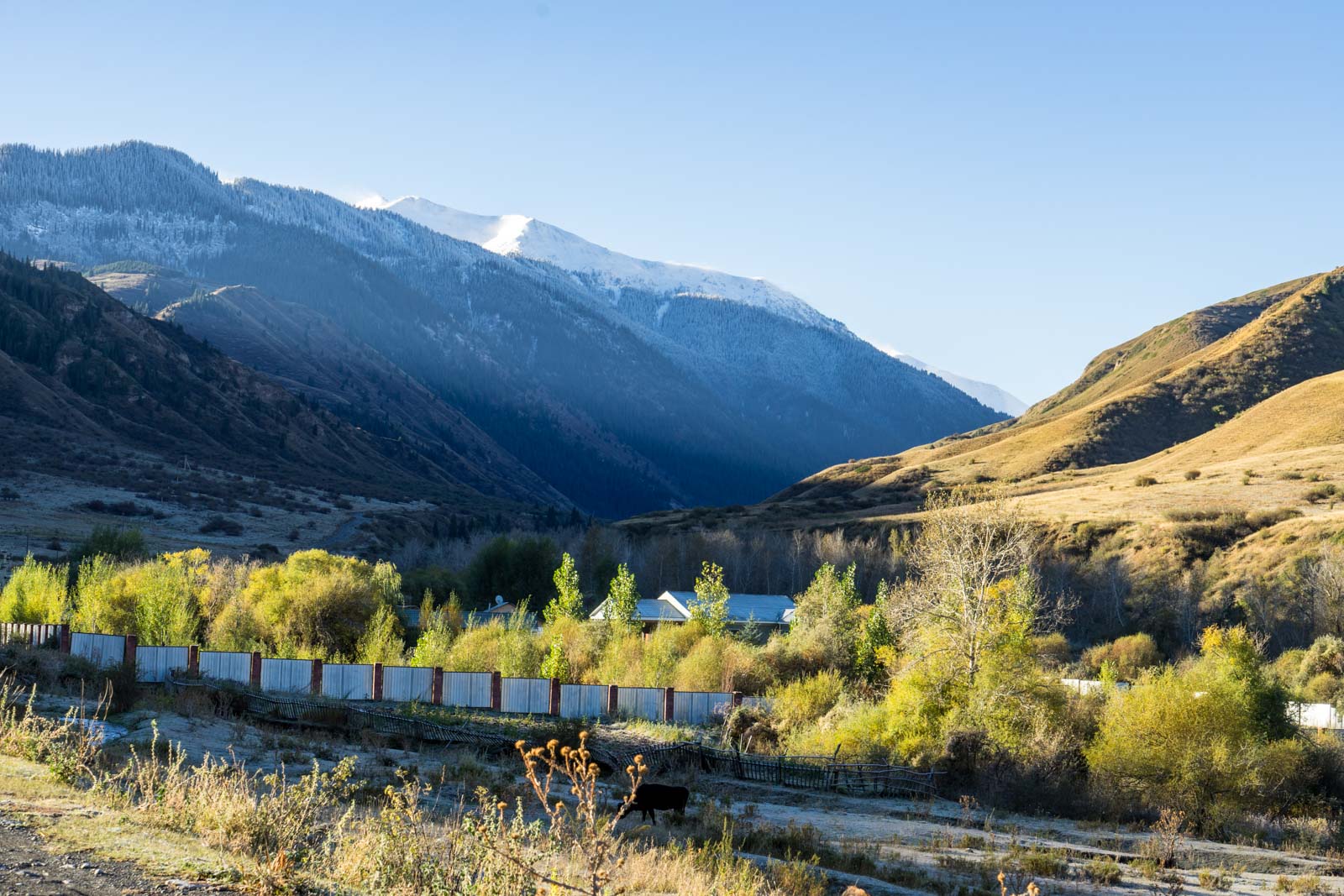 The road to Kyrgyzstan

Once in the bus, there’s a long drive ahead for me and it’s interesting to see how the country changes along the way. I’m heading towards a border pass with Kyrgyzstan.

It will take a few hours to get there but even in that time, I’ll go through green fields, sandy stretches, past rivers, over mountains and through snow.

At one point the bus driver pulls off the highway and drives along a small dirt road for a few minutes. I’m not sure why, until he stops and I can see a canyon in front of me.

It’s the sort of dramatic scenery that you would travel for hours to see in many other countries.

Here, in Kazakhstan, it’s just a casual stop on the side of the road. Have a look at my photo and you’ll see what I mean: 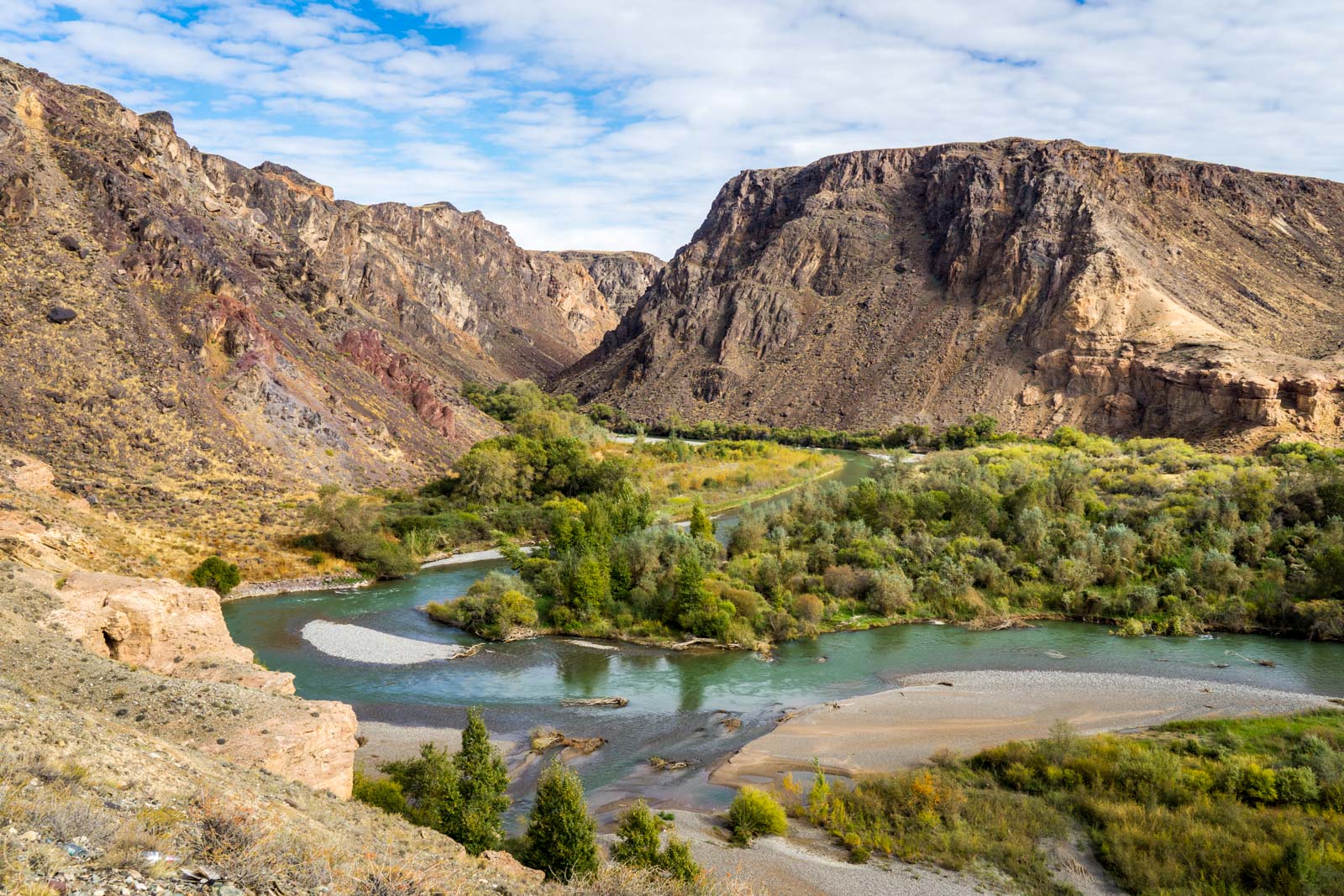 As I head towards the border crossing, the ground turns white with snow – higher up in the mountains it’s still sunny but cold enough to leave the covering unmelted. 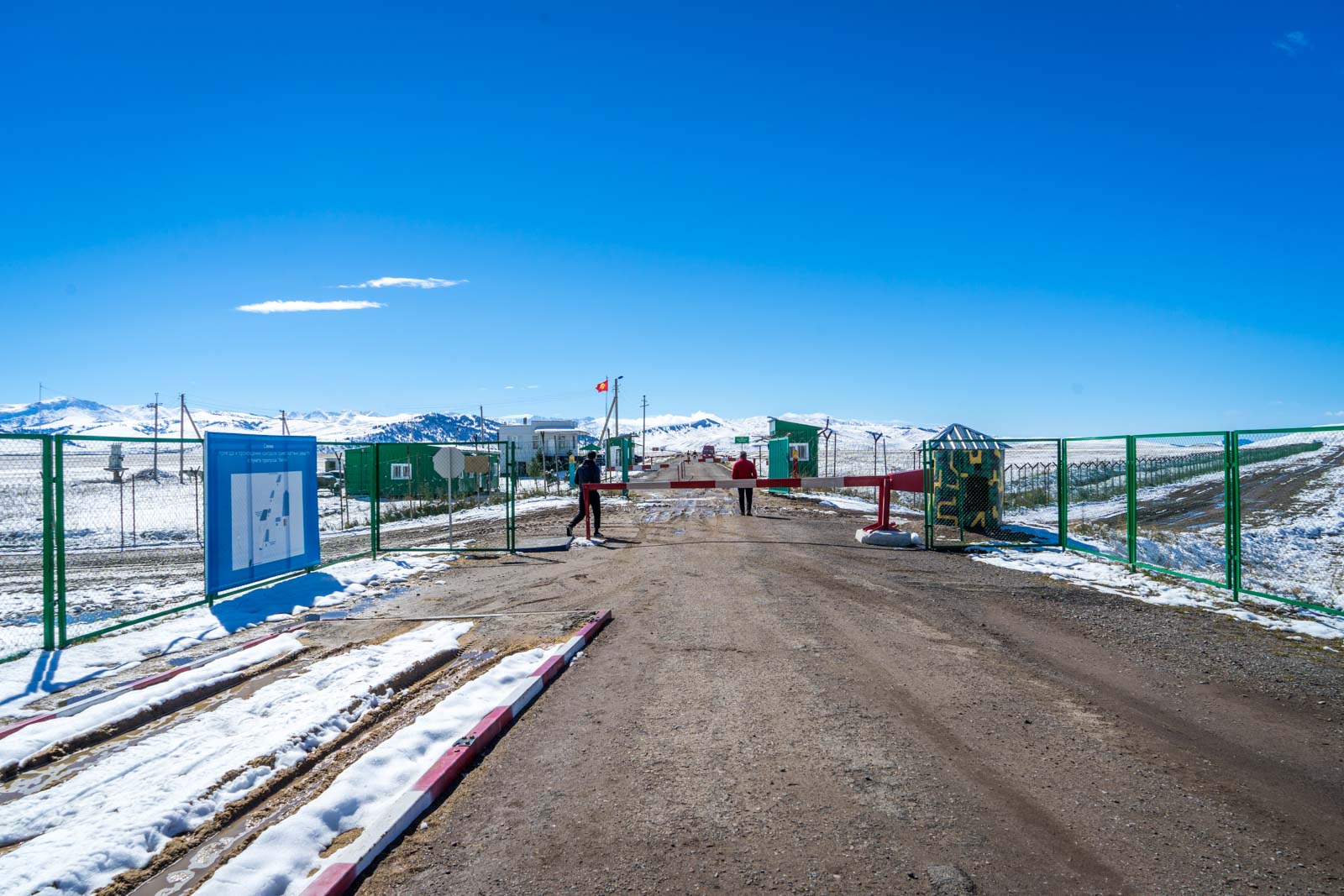 It’s such a tiny part of Kazakhstan that I have travelled through the past couple of days. I’ve covered a lot of kilometres but it doesn’t mean much in a nation this vast.

I can only imagine what else there is to see and I start planning a return in my head.

For now, though, the next stop is Kyrgyzstan.