On the edge of the capital of Menorca, Mahon, I get out of the car, go through a gate, and walk along a little path.

Off to one side are the storage units, car rental companies, and shopping centres of an industrial estate. In another direction, a highway cuts through the green fields. Just a few hundreds metres away is the airport and a plane is descending quickly, ready to land.

The symbols of the modern era surround me, unavoidable even if I closed my eyes. Yet right in front, rising up from the earth, is a large stone structure built by people who could never have imagined the island today.

A conical tower with a staircase at the front, supported by a base of ancillary rooms, it is made without cement. In fact, it’s made with nothing but rocks from the surrounding area. 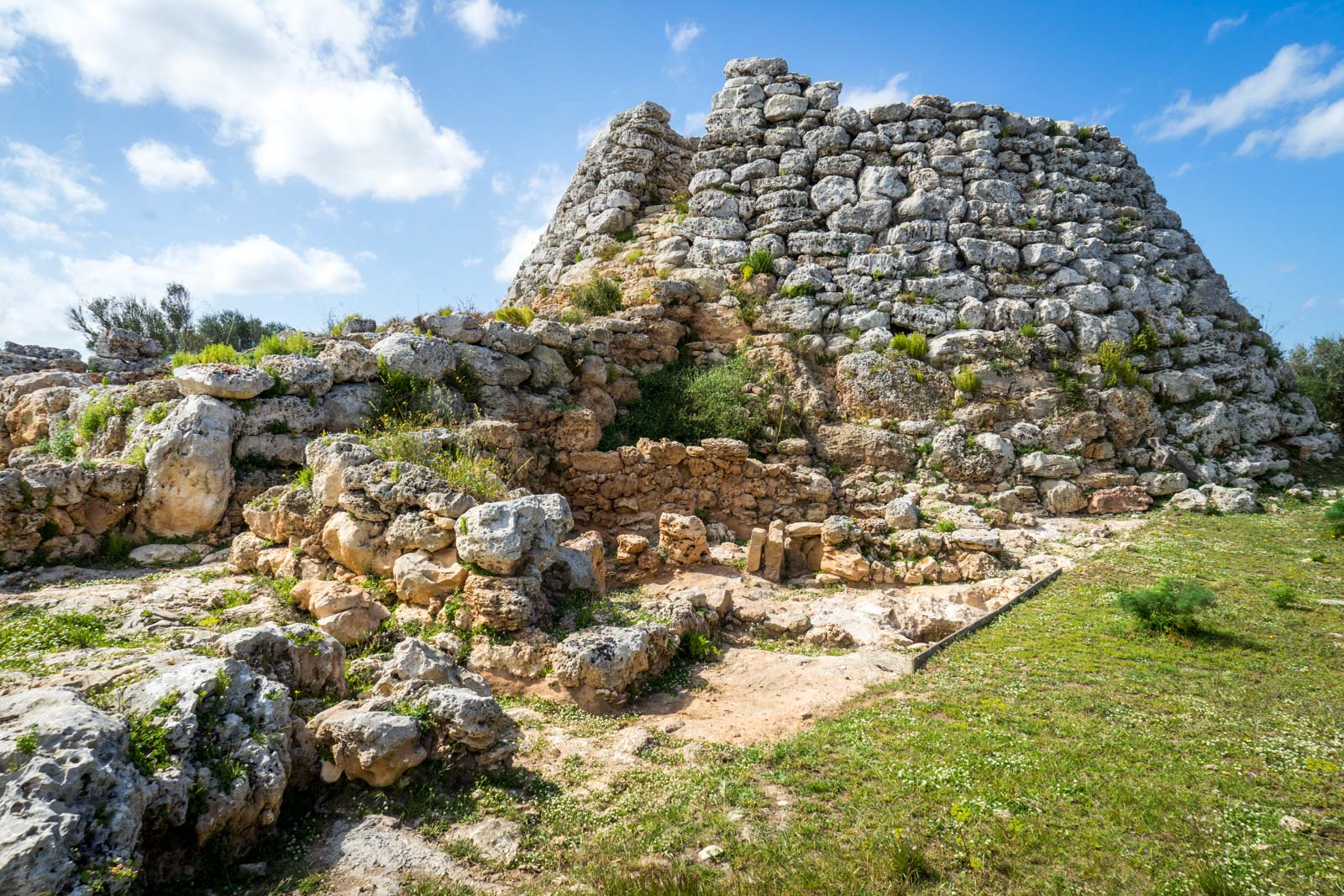 This is the ‘Western Talaiot at Cornia Nou’ – a rather uninspiring name for something of monumental importance.

But the scientific nature of the name is understandable when you realise that this structure is not unique.

Across the island of Menorca, there are about 1500 archaeological sites from this prehistory era, with several hundred of them considered ‘significant’. 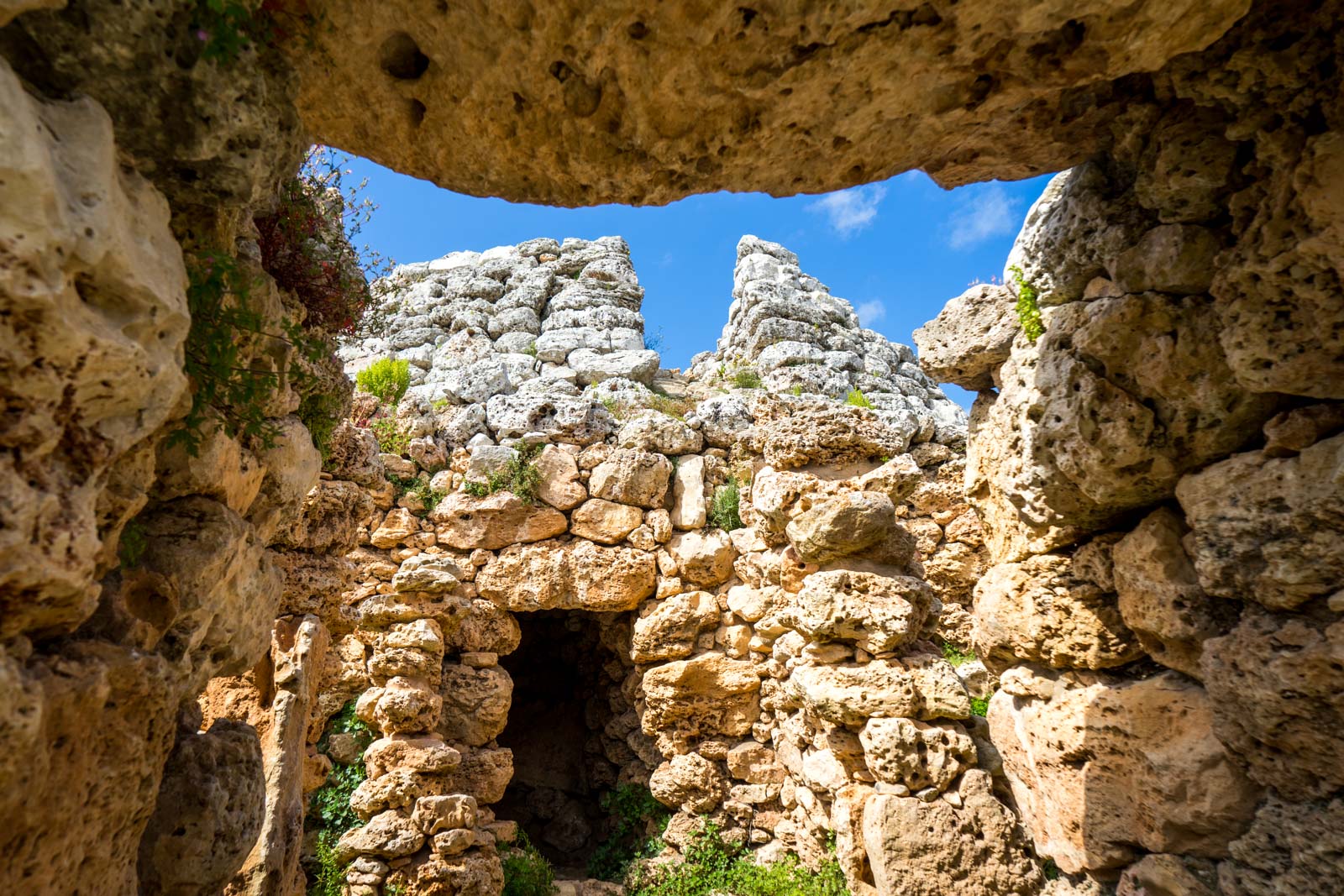 A short drive away, I arrive at another of the sites. Here there are two structures, the North Naveta and the South Naveta of of Rafal Rubi.

Unlike the first construction, which felt much more like a watchtower of some sort, these buildings are smaller and hollow inside.

It’s likely they were some kind of tomb, a theory supported by the discovery of bones from dozens of people inside each. 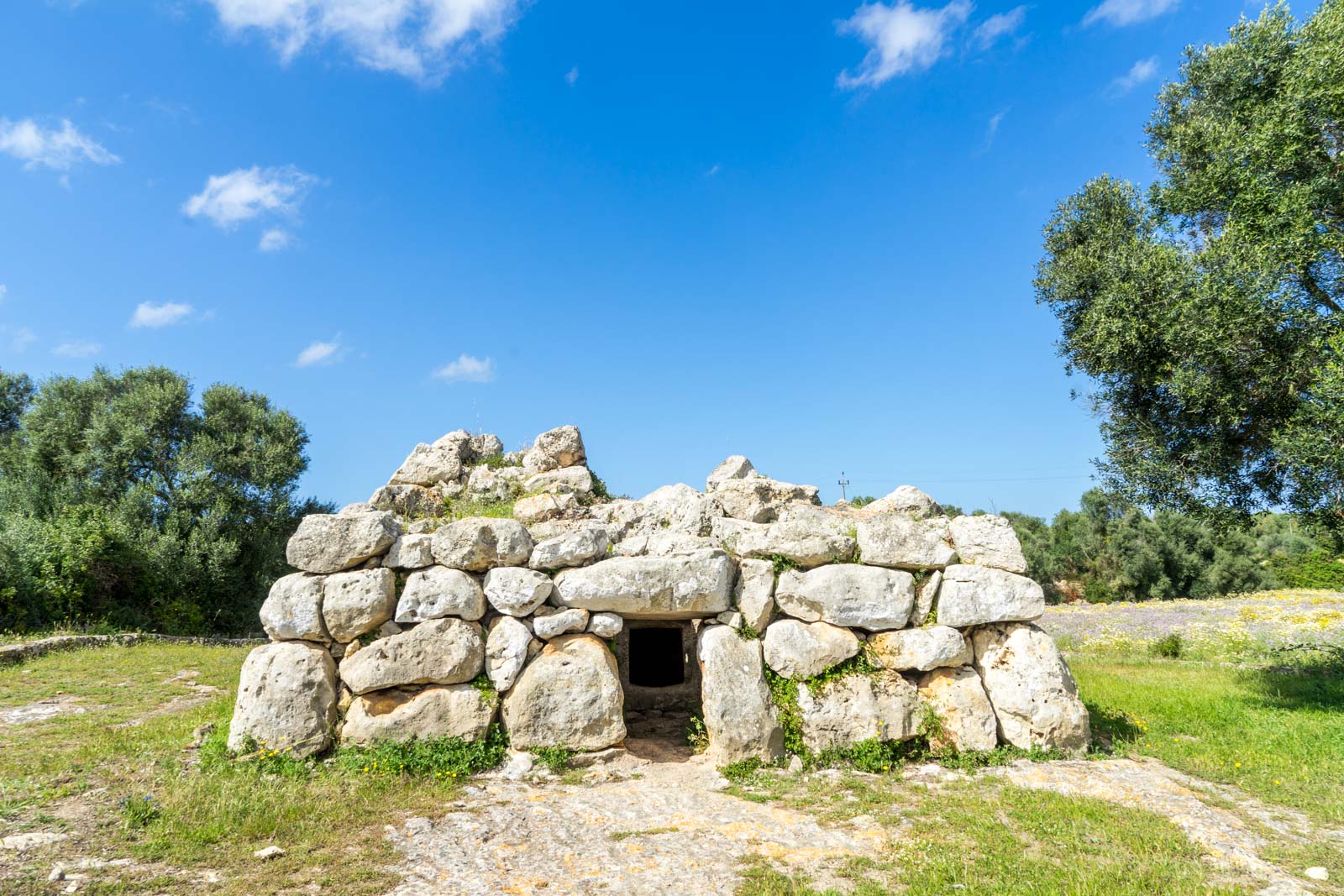 Arriving at the navetas, the first thing I notice are the fields of wildflowers that surround them. Yellow and purple, they cover the land with a blanket of colour.

The sunshine and light breeze make them almost glimmer. But crawling through the tiny entrance of one of the stone edifices, I emerge into a dark cavern of grey. The only colour is the green of the mould on the walls, the only sound in the silence is my breathing.

It would have been a peaceful resting place for the departed. 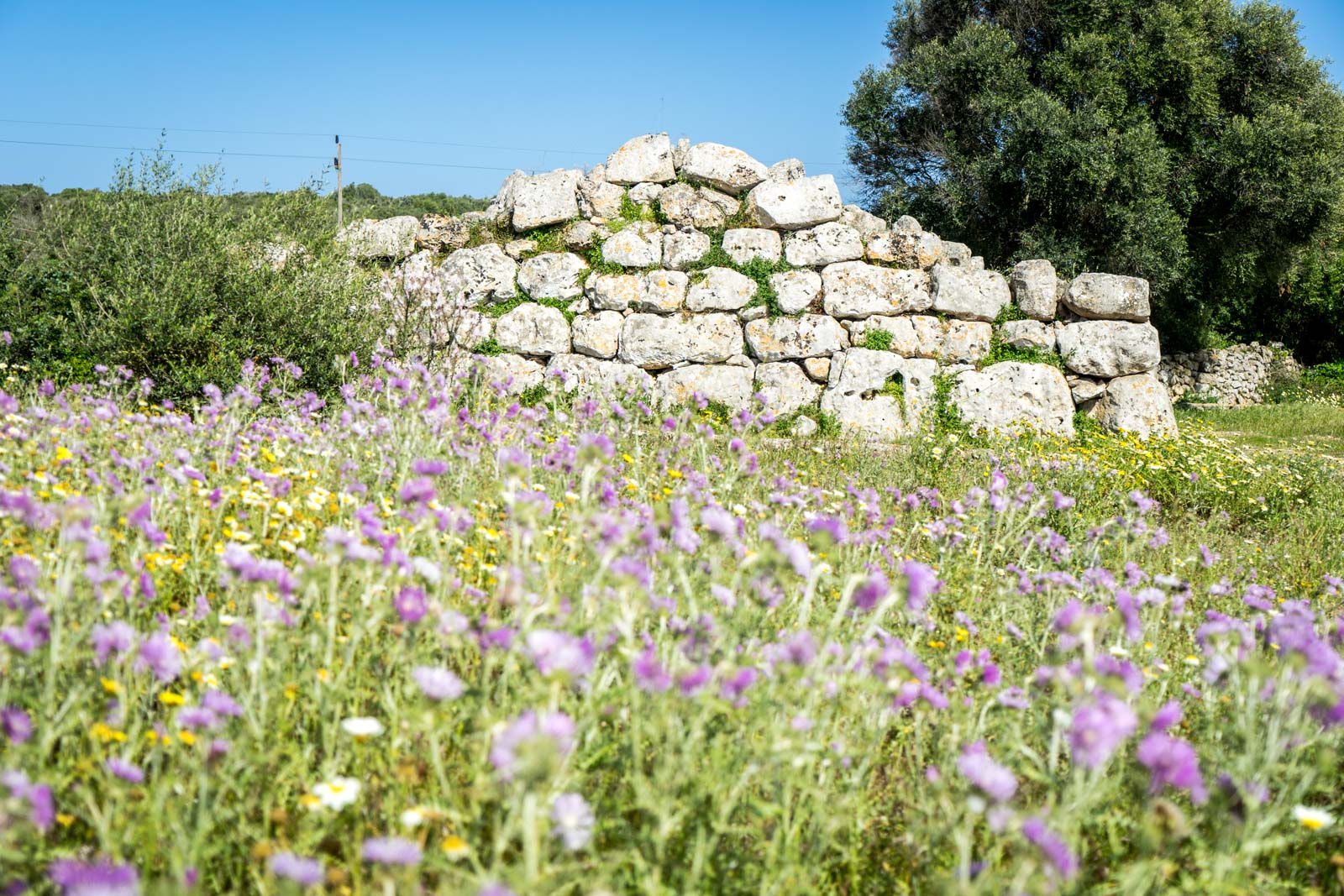 We don’t really know who these people were, though. They are a mystery.

They left us no writings, no art, and very few items aside from pottery and tools.

All we really have are the hundreds of buildings they constructed. The name given to them by archaeologists is the ‘Talaiotic Culture’.

What we do know is that these people lived on Menorca during the prehistory period from about 1500BC until Romans arrived in the region in the 2nd century AD.

The ruins of their civilisation suggest that they were warriors (or at least defenders) because of the military nature of structures like watchtowers, that they practiced some kind of religion, and that they lived together in townships. 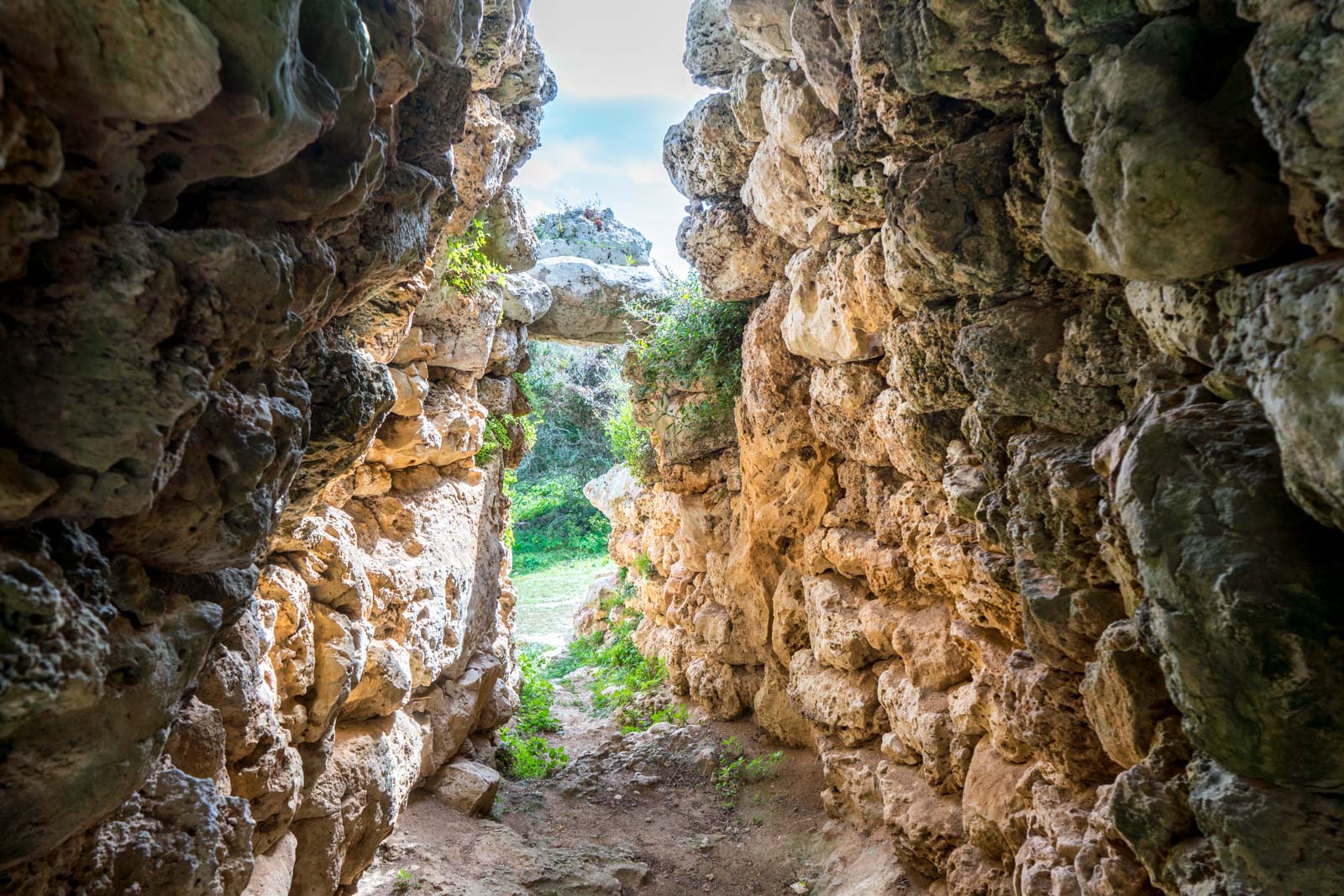 Although there is consistency in the construction methods of the hundreds of archaeological findings on the island, there are differences in the styles.

It could be that this was simply an evolution of design tastes over the millennium. However, it’s also possible that there were in fact more than one culture during this time – that new invaders took control and put their own mark on Menorca.

A lot of scientific work is happening to find out more – but often new discoveries lead to more questions rather than answers. 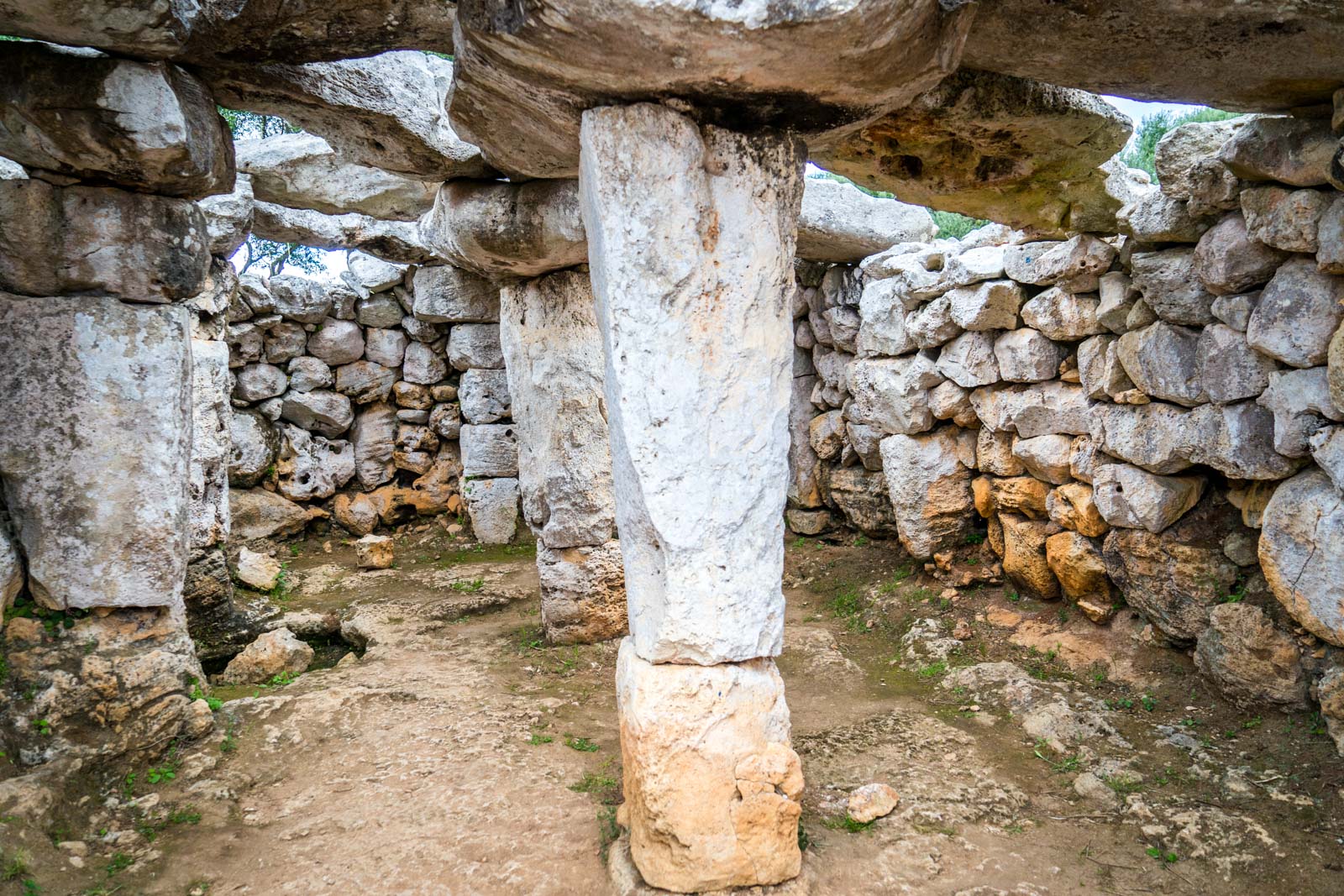 At a site called Cales Coves, I see this for myself.

On the south coast of the island, is a pair of small bays with high cliffs surrounding them. Dug into the cliffs are more than 90 caves.

These days, they are used by private owners who want a summer ‘home’ by the water and they’re gated and locked during the summer months. But more than 3000 years ago they were created as burial sites for the earliest of the Talaiotic people. 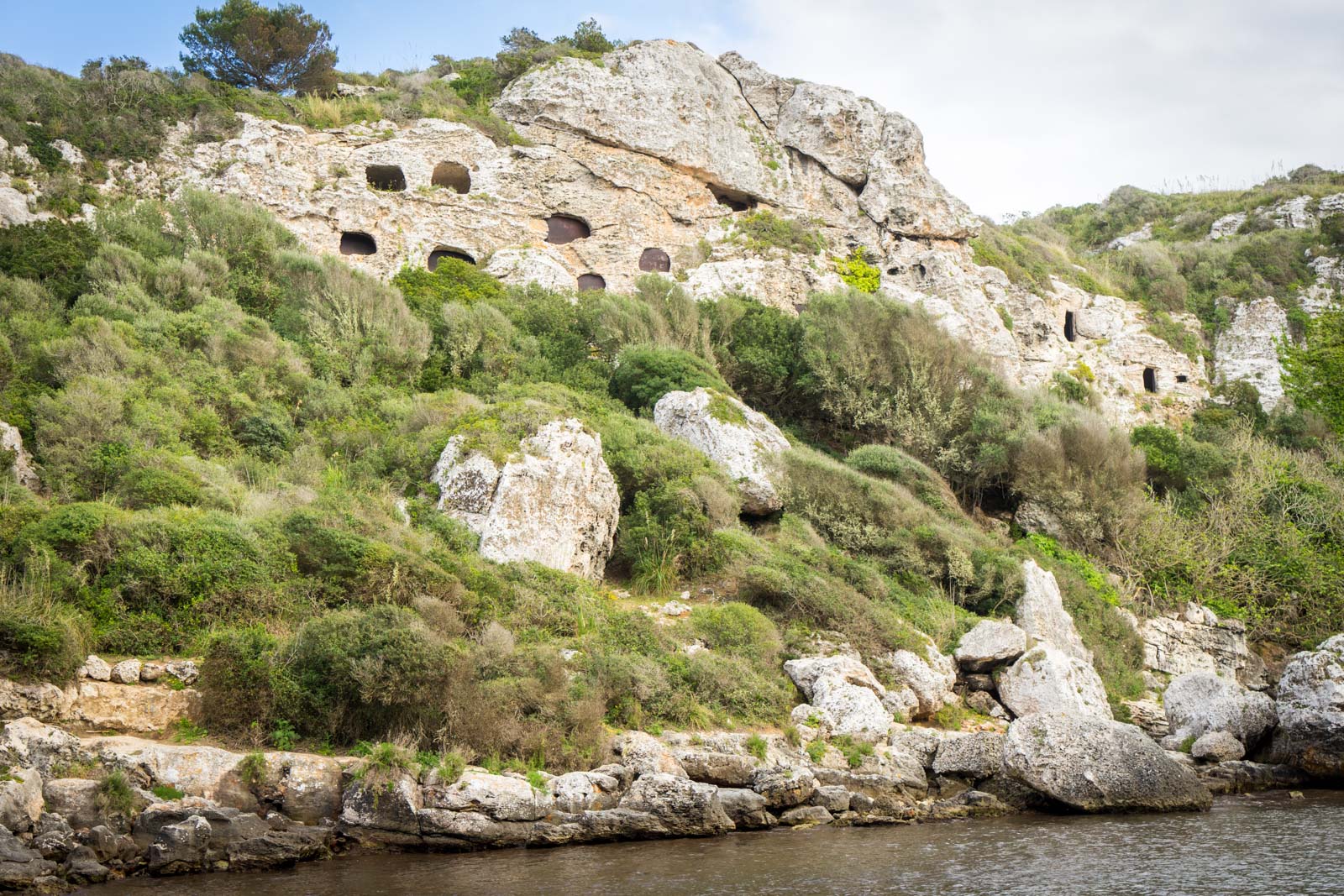 Somehow, at some point, this practice stopped and was replaced by the stone tombs I had climbed into just half an hour earlier. 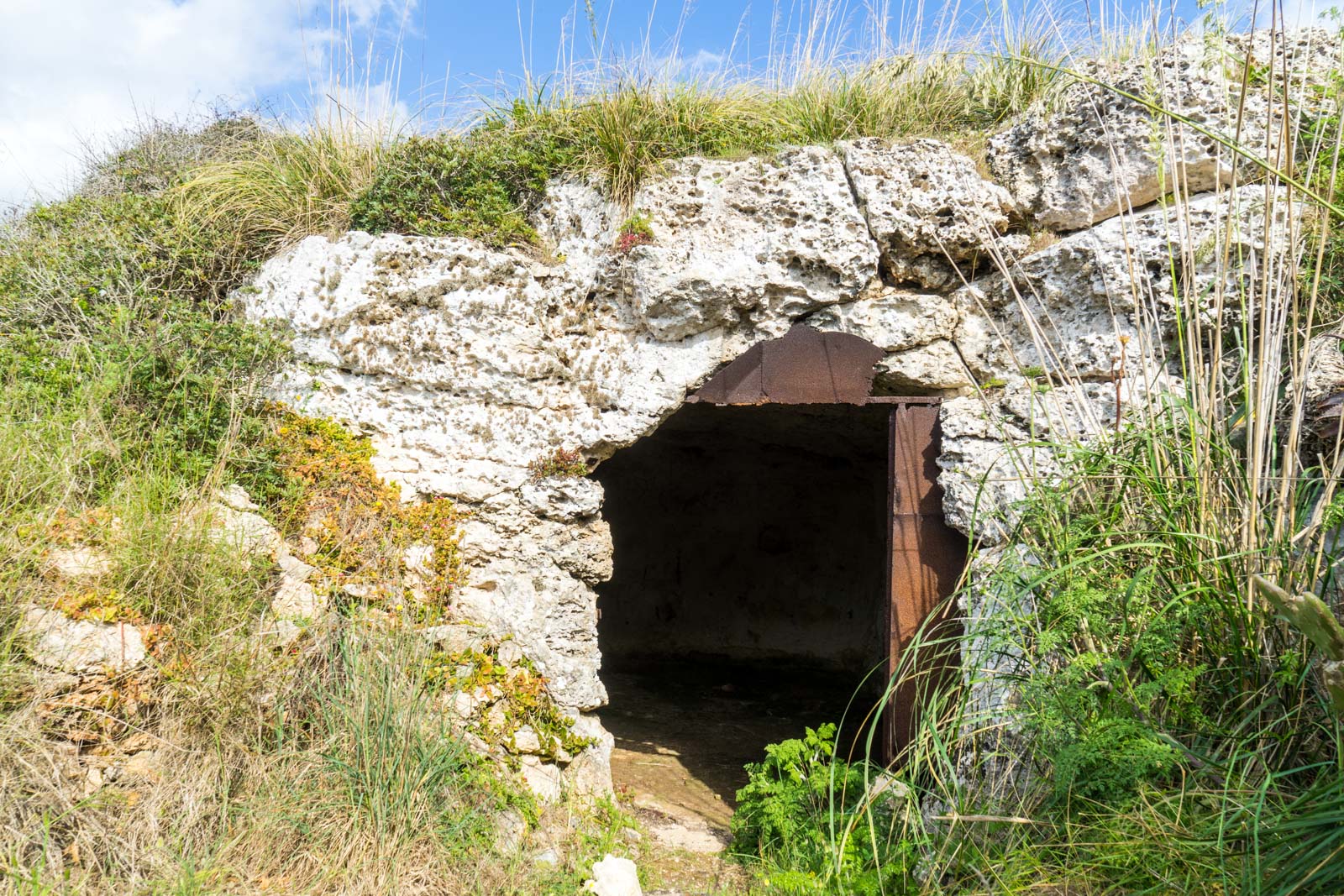 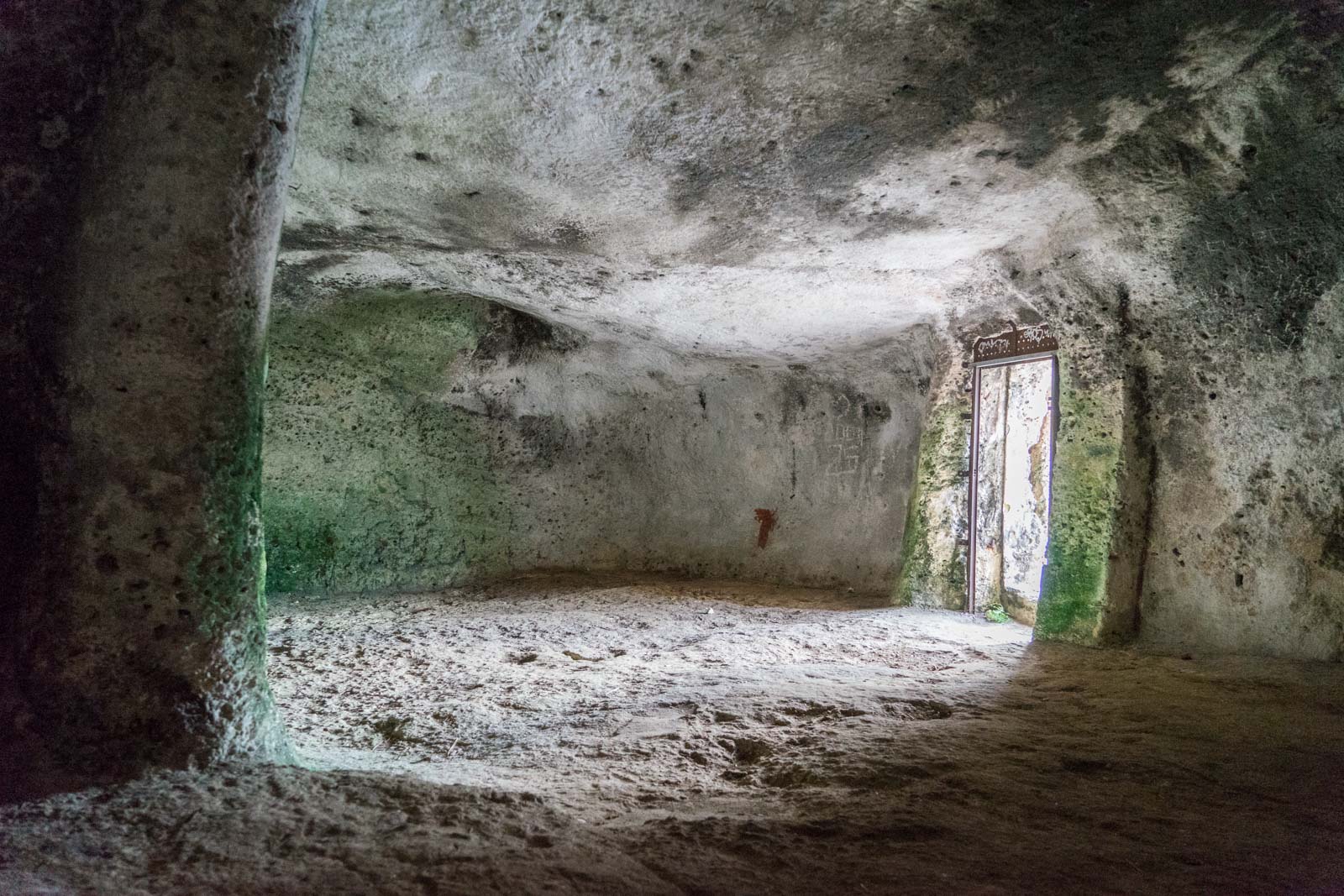 Questions like these are important and there is a desire to learn much more. Whether we’ll ever have any definitive answers is unclear, though.

What is certain is the significance of all of these ruins on Menorca. There is now a push to have them included by UNESCO on the World Heritage List and the local authorities are hopeful this will happen in 2017.

To make the listing easier, the authorities have chosen 32 properties to be included in the proposed World Heritage Site. If you’re interested in visiting some of them for yourself, I have put them onto a map that you can see here:

The biggest of these properties is where I finish the day. It’s called Torre d’en Galmes and it’s more than six hectares large.

What is so fascinating about the ruins here is that they clearly show the layout of a town, with houses grouped together, communal areas, and significant public buildings.

I walk into one of the houses. There’s no roof but you can easily make out the different areas – a master bedroom, extra bedrooms, living space, storerooms, kitchen, bathroom.

It’s really large – bigger than a typical city apartment – and doesn’t look too dissimilar to the way we would organise a house these days. 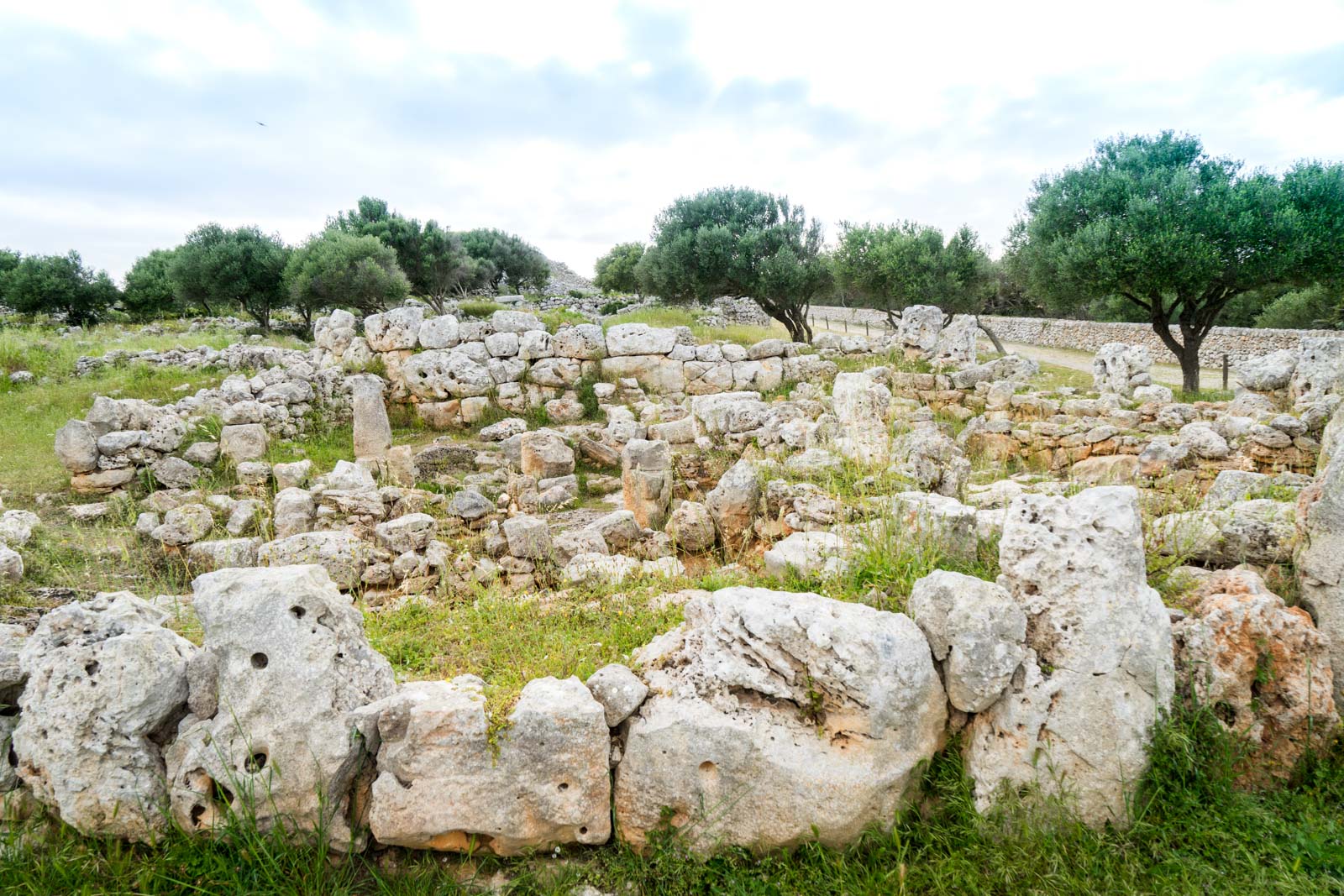 It’s slightly odd to think that in the year 1300 BC, about 3300 years ago, there were people on Menorca living in houses that resemble ours today.

In that year, it’s estimated about 900 people were living in this community, Torres d’en Galmes, and it would have felt like a little town. 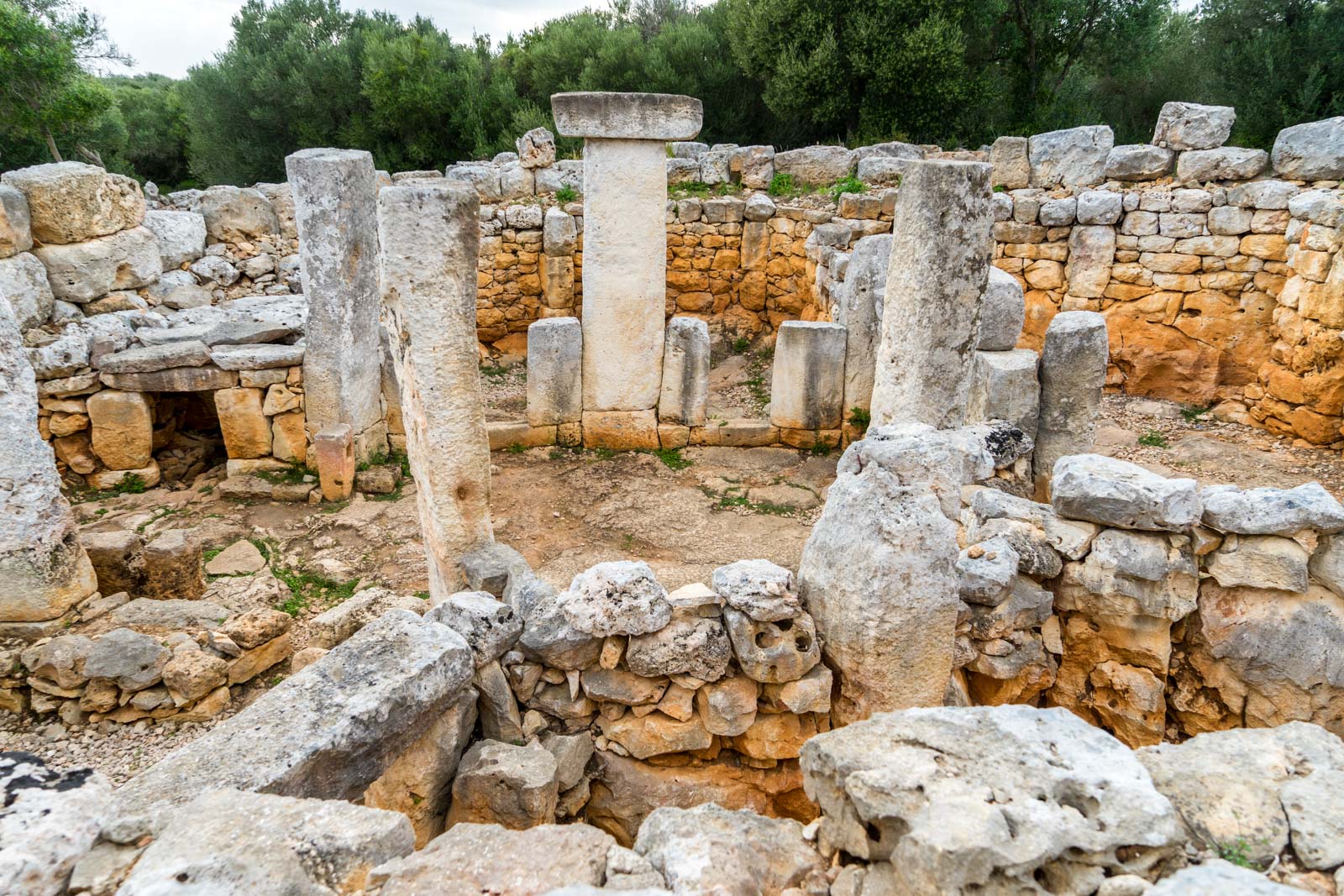 To me, this is what makes the sites of the Talaiotic Culture so interesting. It’s not just the mystery of the history. It’s also about finding those links between who we are and have always been.

For accommodation, I highly recommend the Artiem Audax in Cala Galdana.