On board the Stena Adventurer

“Good morning ladies and gentlemen, this is captain Richard Davies speaking. On behalf of myself, officers and crew I’d like to welcome you aboard the Stena Adventurer this morning for this schedule 8:20 sailing to Holyhead. Loading operations are now complete and…”

The welcome message continues. Normally I would ignore this kind of thing – stare out a window daydreaming or continue reading whichever book I’ve stolen from a hotel shelf. But today is different.

Today the message isn’t being blared out of a speaker above my seat because this time I’m standing right next to the man making the announcement.

I’m with the captain on the bridge of the Stena Adventurer as we pull out of Dublin’s harbour. 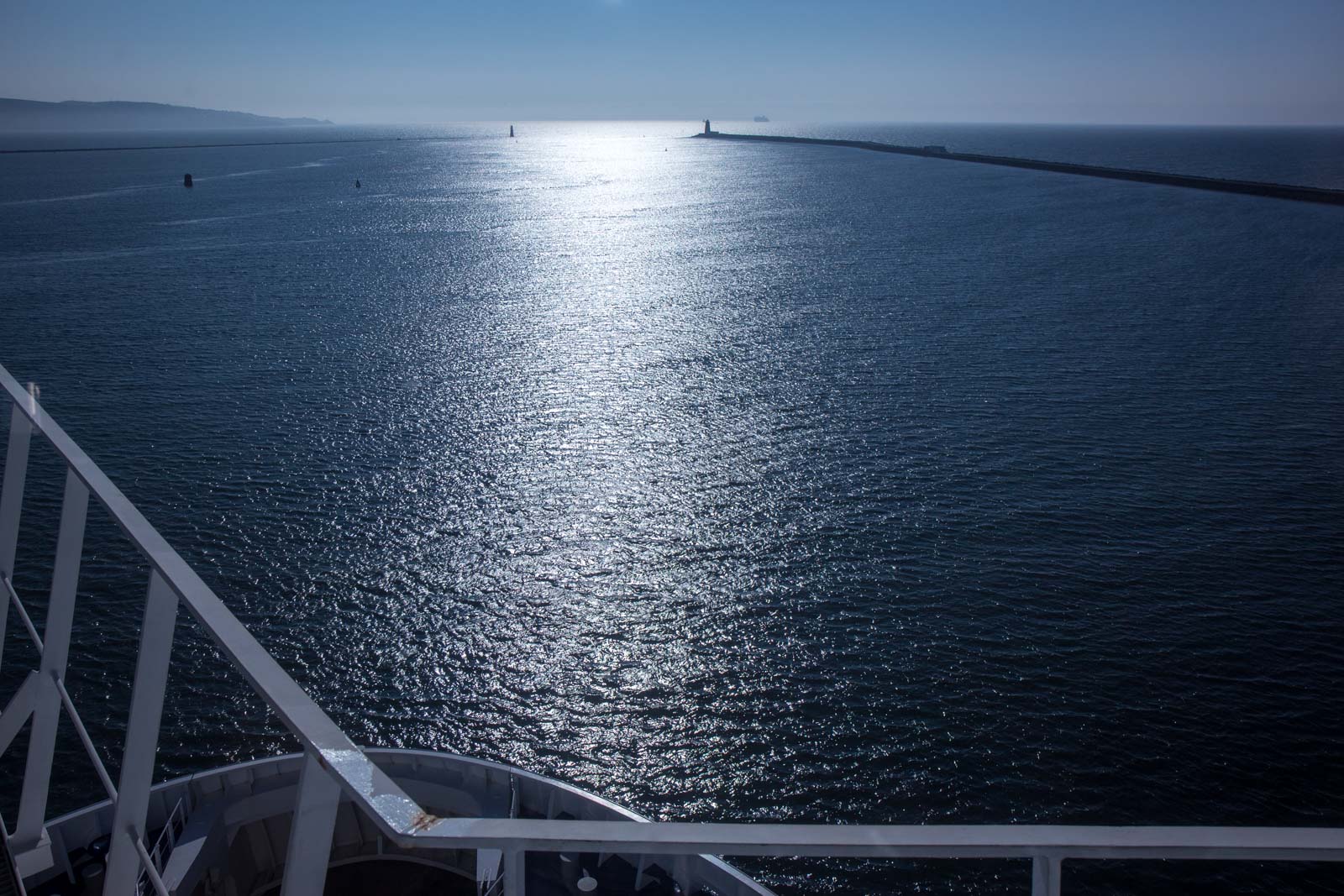 It’s an early morning departure and the sun is still low enough in the sky that its rays create a long white line in the reflection on the water. As we’re about to sail east, towards the dawn, it seems as if the shimmering image is lighting the way for us. 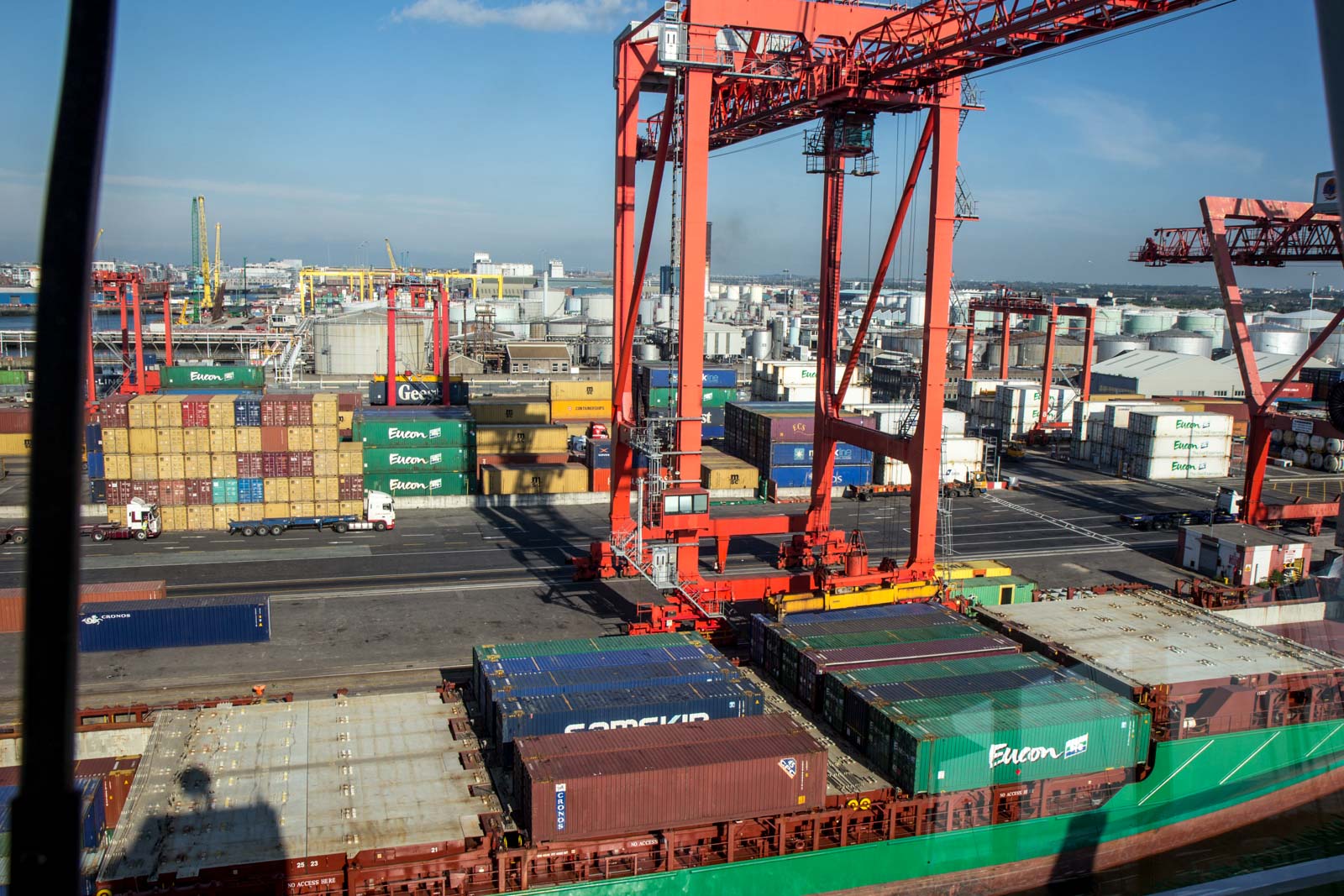 Around the ferry in the port, cargo chip containers are stacked beneath the large orange cranes which still seem to be asleep themselves at this time of the morning.

All is peaceful, suspended perhaps in the hammock-like shapes the sharp and long shadows of the cranes are forming.

Until we’re jolted from the moment by the shuddering of the engines on the Stena Adventurer. 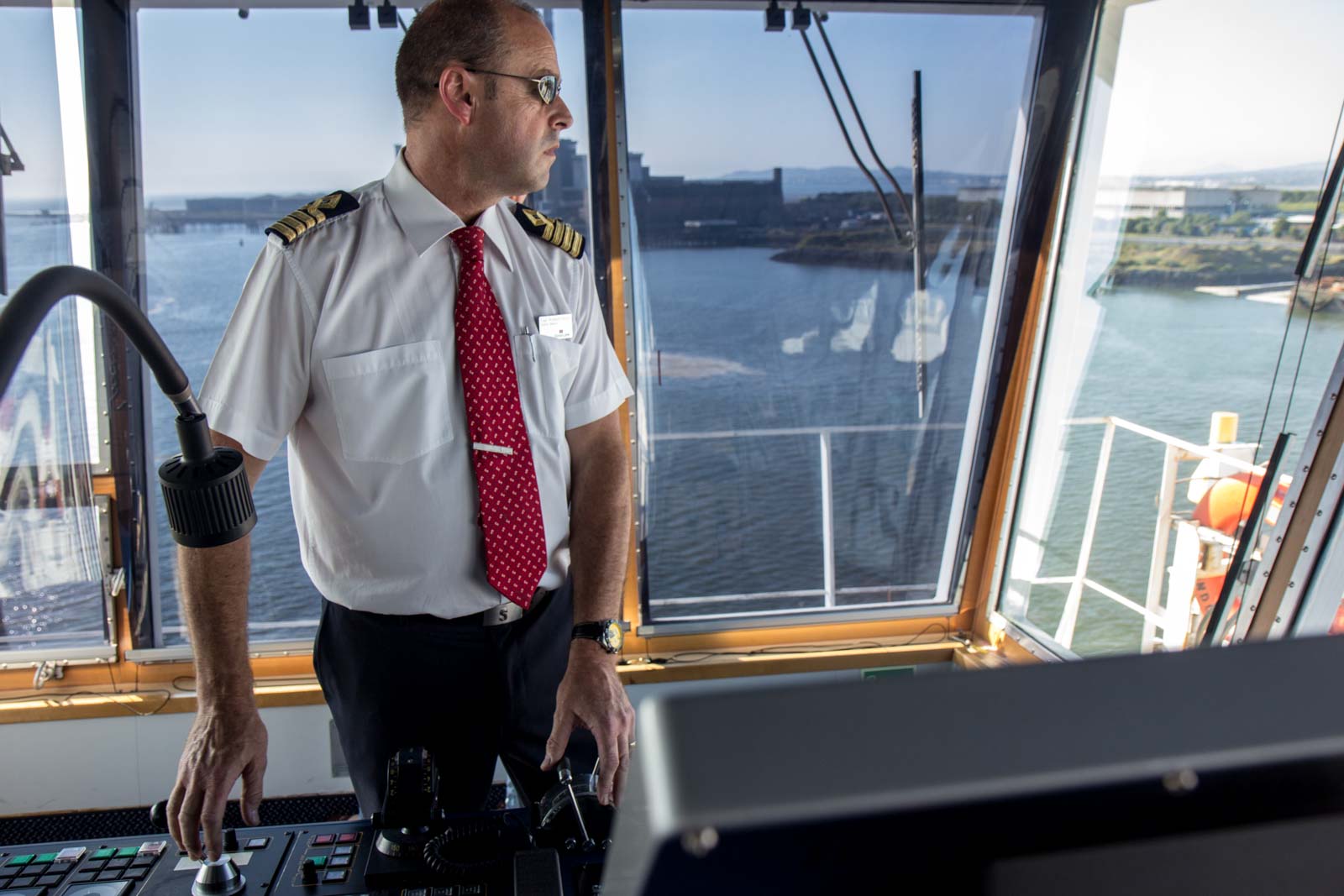 Captain Richard Davies is starting our journey and we are pulling away from the dock.

Up here, you get a wide view of what’s ahead but it can be difficult to see down to where you currently are. Glass panels in the floor on either side of the bridge allow you to look below, though.

I stand on one of them as the side of the metal boat glides perilously near to the dock. 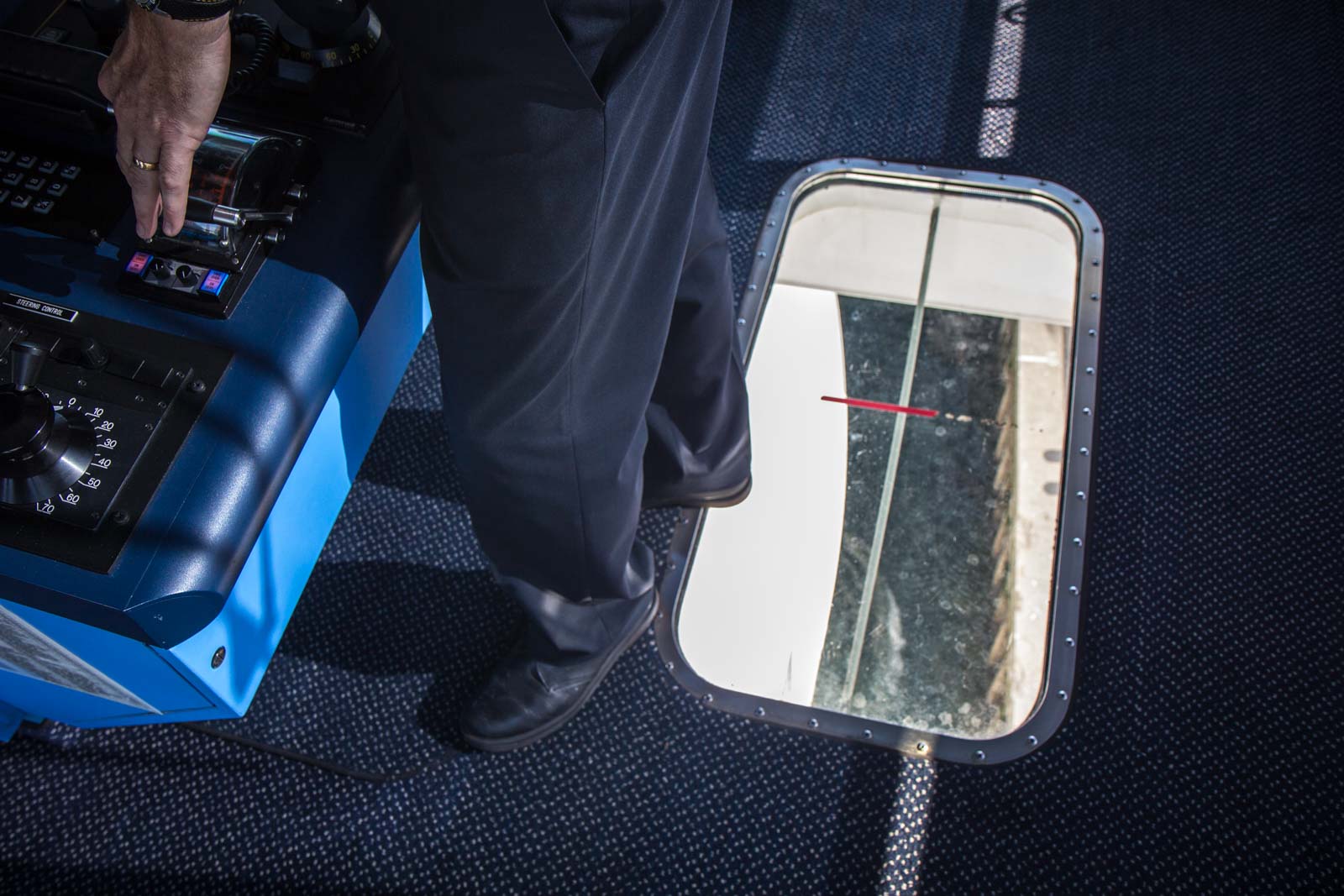 “We’re pretty close down there, aren’t we?” I say to the captain, hoping it won’t come across with the slight panic I’m feeling.

“Yeah,” he replies calmly. “So I’m using the thruster now to keep that bit off… and the engines to move the back end of the ship.” 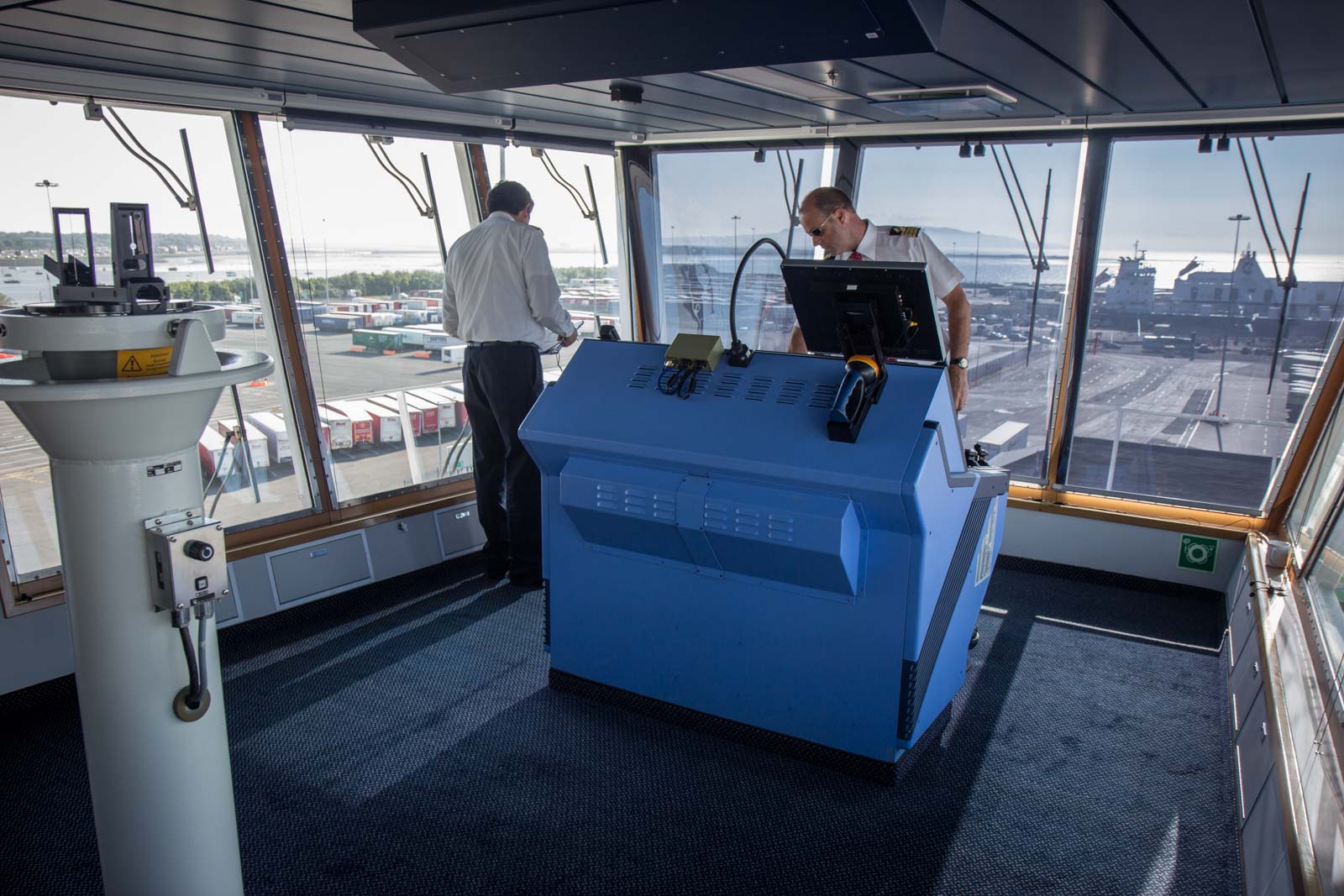 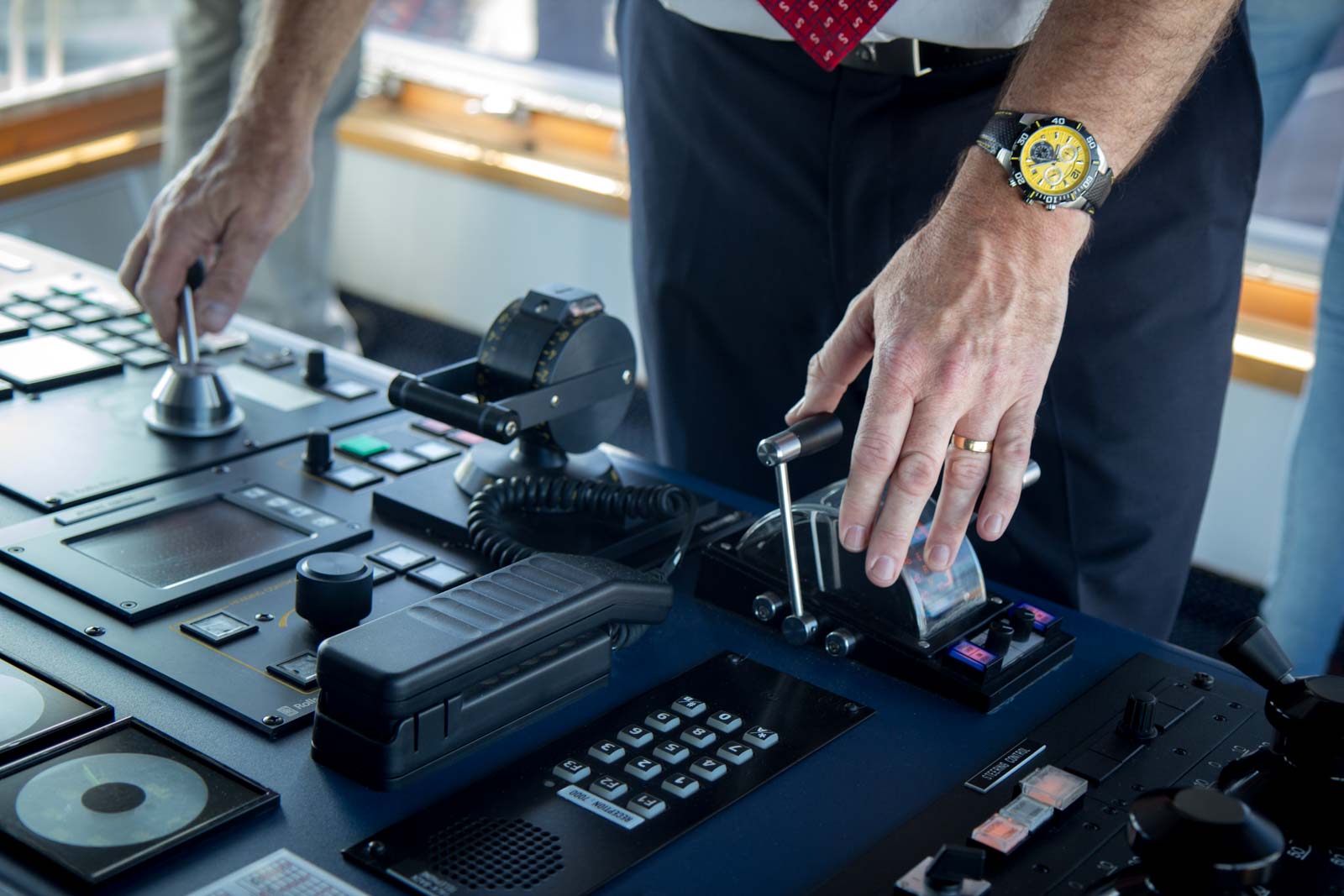 Manoeuvring a massive ferry out of port feels to me like having to reverse park a car on a busy street with hundreds of people watching. Richard handles it with poise, always watching but never worrying.

“So now I’ve got to get the back up into the river,” he explains.

“The stern’s out in the river now, so we’ve got to get it up here.”

He points to a display screen which is showing the boat’s position as an outline on a simple geometric matrix.

“On the south side now, just coming into view, there’s a big ship so we’ve got to try to manoeuvre past him.” 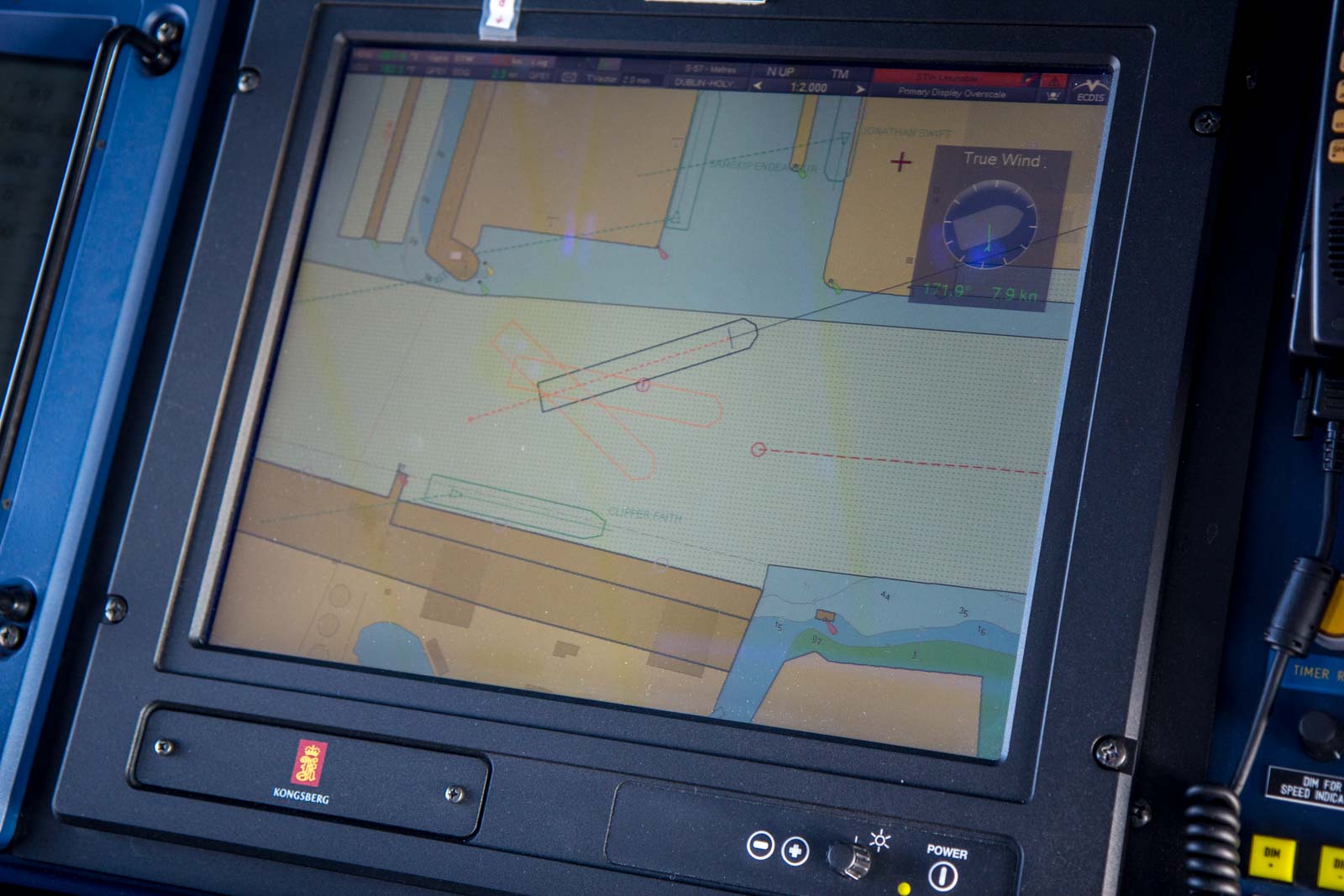 Richard makes it look easy, as we successfully avoid the other ship and start to turn the ferry around to point in the right direction to sail out to the wider waters.

“Not bad for the first time, is it?” Richard jokes.

Everyone on the bridge laughs. Of course, this is not his first time in charge.

Richard Davies has actually been the captain here on the Stena Adventurer for ten years. Before that, he was captain on another ship for seven years. In total, he’s been working on boats like this for more than 30 years. 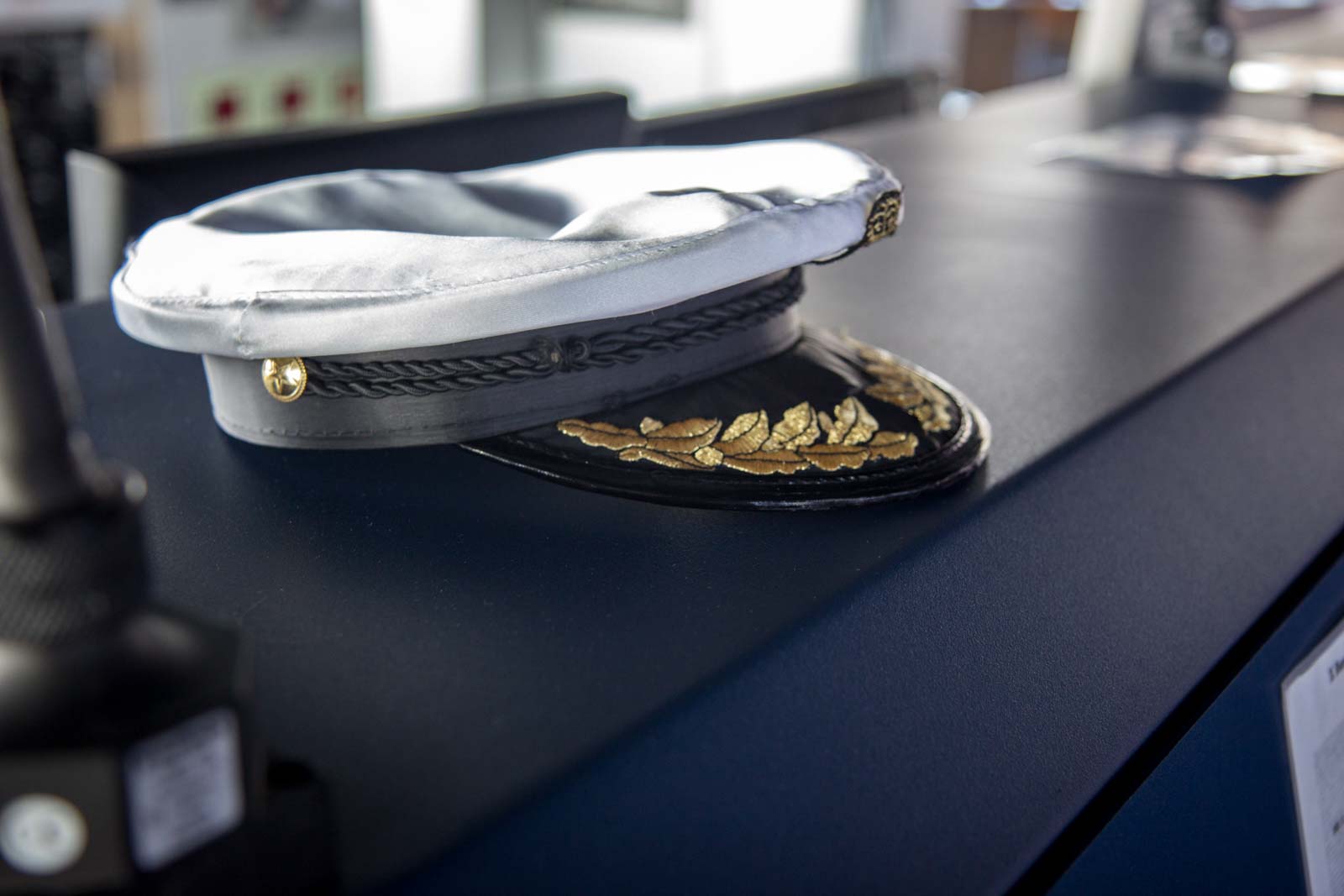 “The minimum time before you get your captain’s certificate was 10 years,” he recalls.

“So I left school at 16 and I was 26 when I got my captain’s ticket and I was very lucky to be in the right place at the right time and at 27 I did my first trip as captain.” 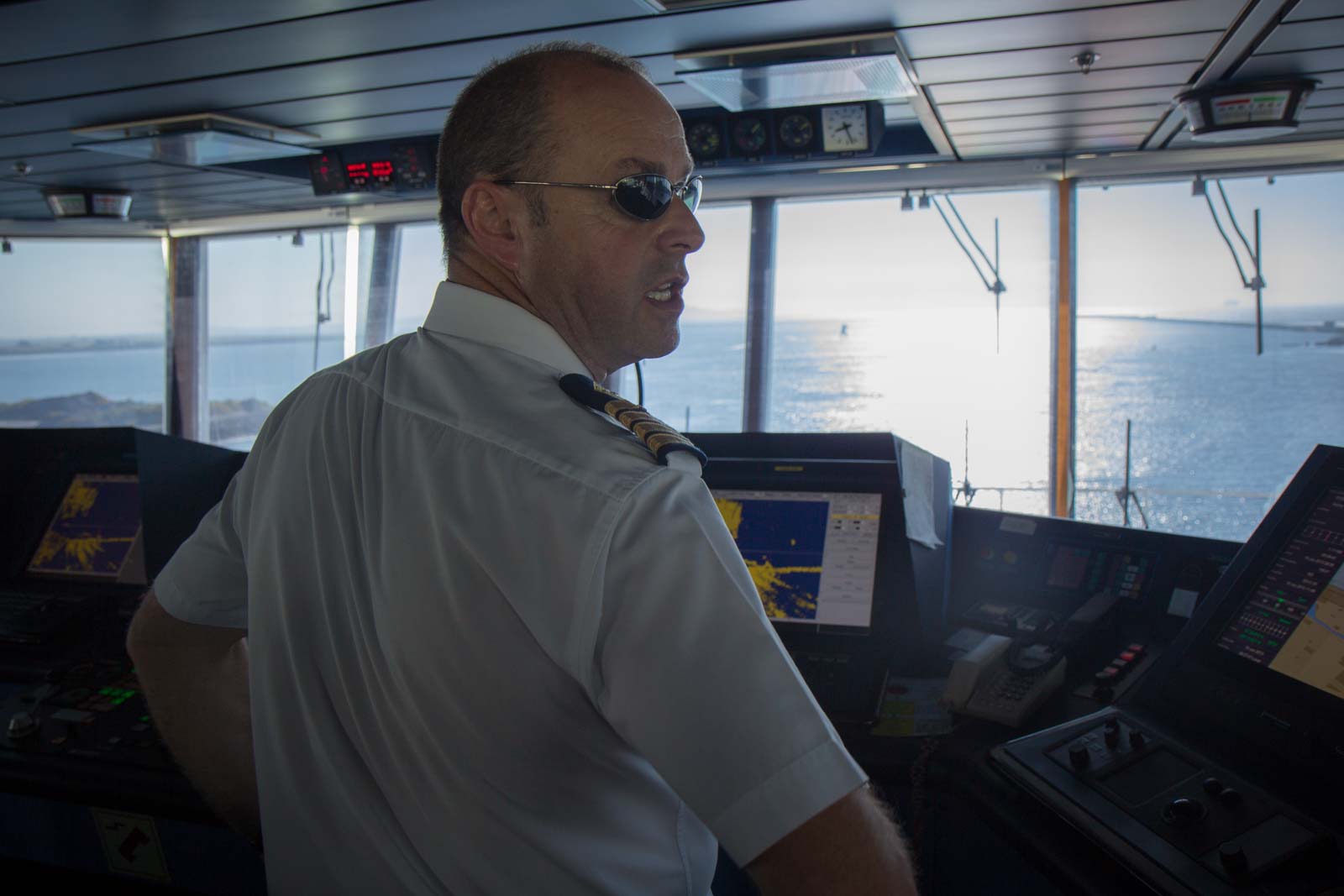 Richard has been half-looking at me and half-glancing out the wide windows which cover the sides of the large bridge, about the size of a tennis court.

Either he has just noticed something or realised he was getting a bit distracted and he suddenly turns and shouts to the helmsman who is standing at the wheel in the centre of the room.

He turns back to me and I ask about the role of the helmsman, a young guy in his twenties.

“He’s in control of the rudders now. So in order to come out of here we’re on hand-steering, we call it. So he’s actually taking orders from me to steer a set course. So he turns the rudders to keep us on a steady course at 0-9-0.” 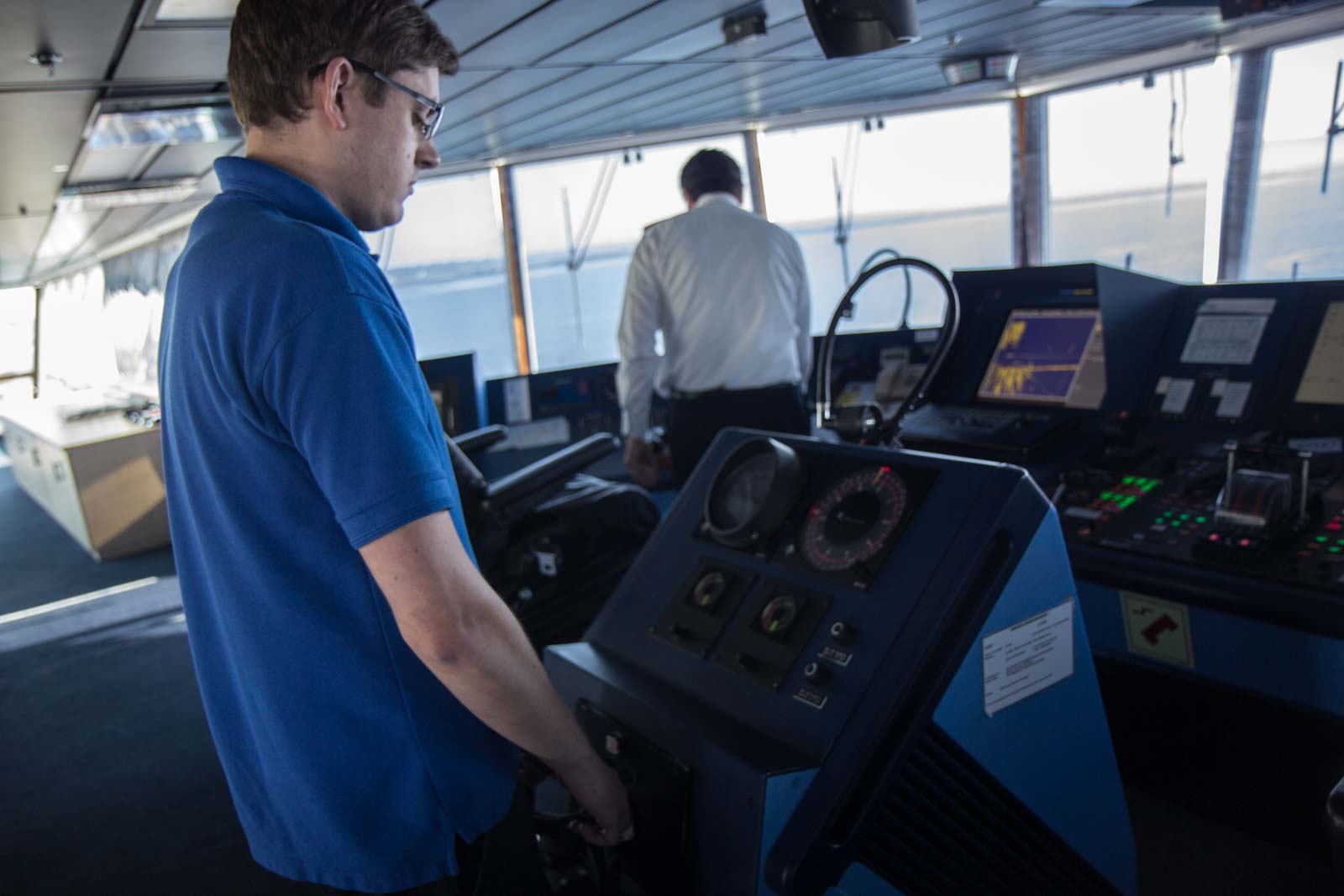 Richard Davies has been chatting for almost fifteen minutes now, the whole time he’s been carefully moving the ferry out of the dock, into the right position, and out of Dublin’s port.

He’s been joking and explaining things in a way that might make you think he hasn’t been concentrating. But he has.

This is his job and he knows it well. Especially on a clear day like today, it’s not too difficult for an expert like him and it’s all a matter of just making sure things go according to plan. 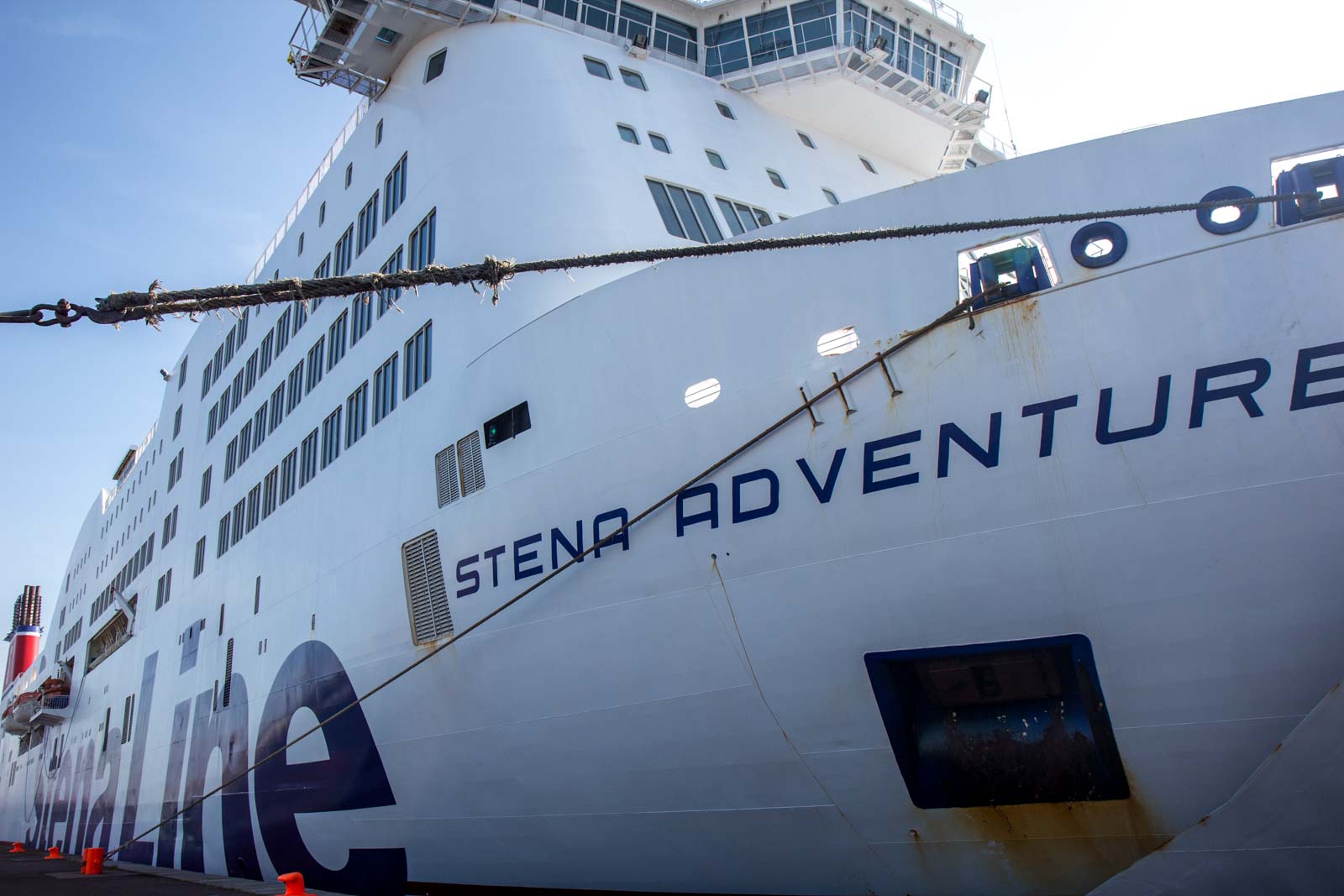 Once we’re past the final buoys that mark the edge of the port, free from the other vessels coming in and out through the narrow entrance, things become even easier. He switches the ferry to autopilot and lets the controllers back at the port know that we’re on our way.

“India out, thank you”

As for me… well, it’s been exhausting just watching it all. I’m going to head below deck to grab some breakfast and watch the beautiful shimmering water all the way to Wales.

Time Travel Turtle was a guest of Stena Line but the opinions, over-written descriptions and bad jokes are his own.