It felt right, the introduction. After all, we were all dressed in our best medieval garb and we were in a castle first built in the ninth century. Yes, for tonight I could be a noble knight. 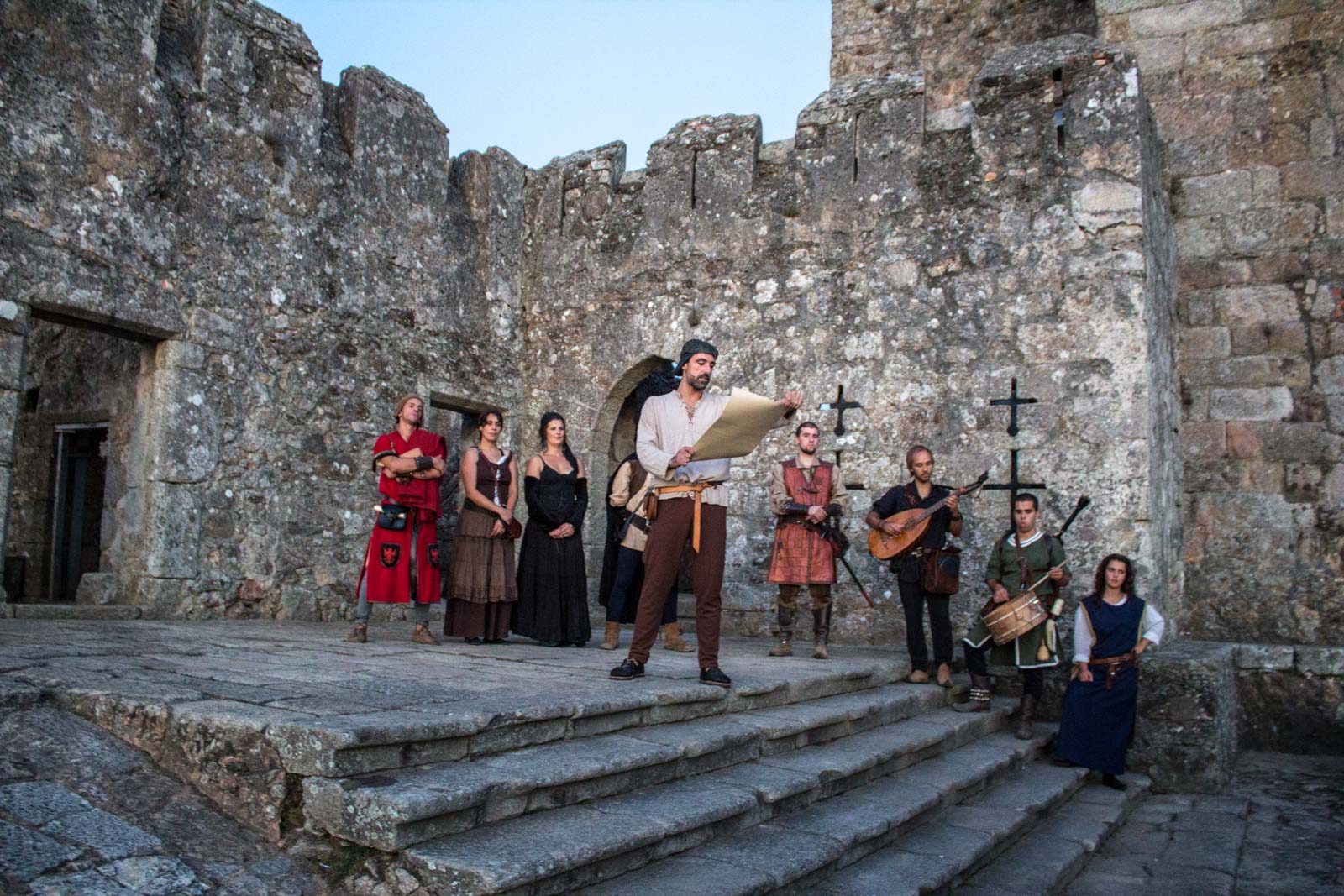 We were a small group of travel bloggers, guests of the Portuguese tourism association and, as it turned out, we were about to be transported back to medieval times. It seemed appropriate for a time travelling turtle.

What does one do in a castle before a feast? Well, some archery it seems. “Shoot straight”, I told myself as I placed the arrow and pulled back the bow. “Don’t embarrass yourself in front of the fair maidens and respected lords.”

Bullseye! Well, not quite. But it did hit the board and for that I was grateful. A lost arrow and lost pride would not be a good way to start the evening. But nobody offered to let me try to hit an apple on their head, I noticed. 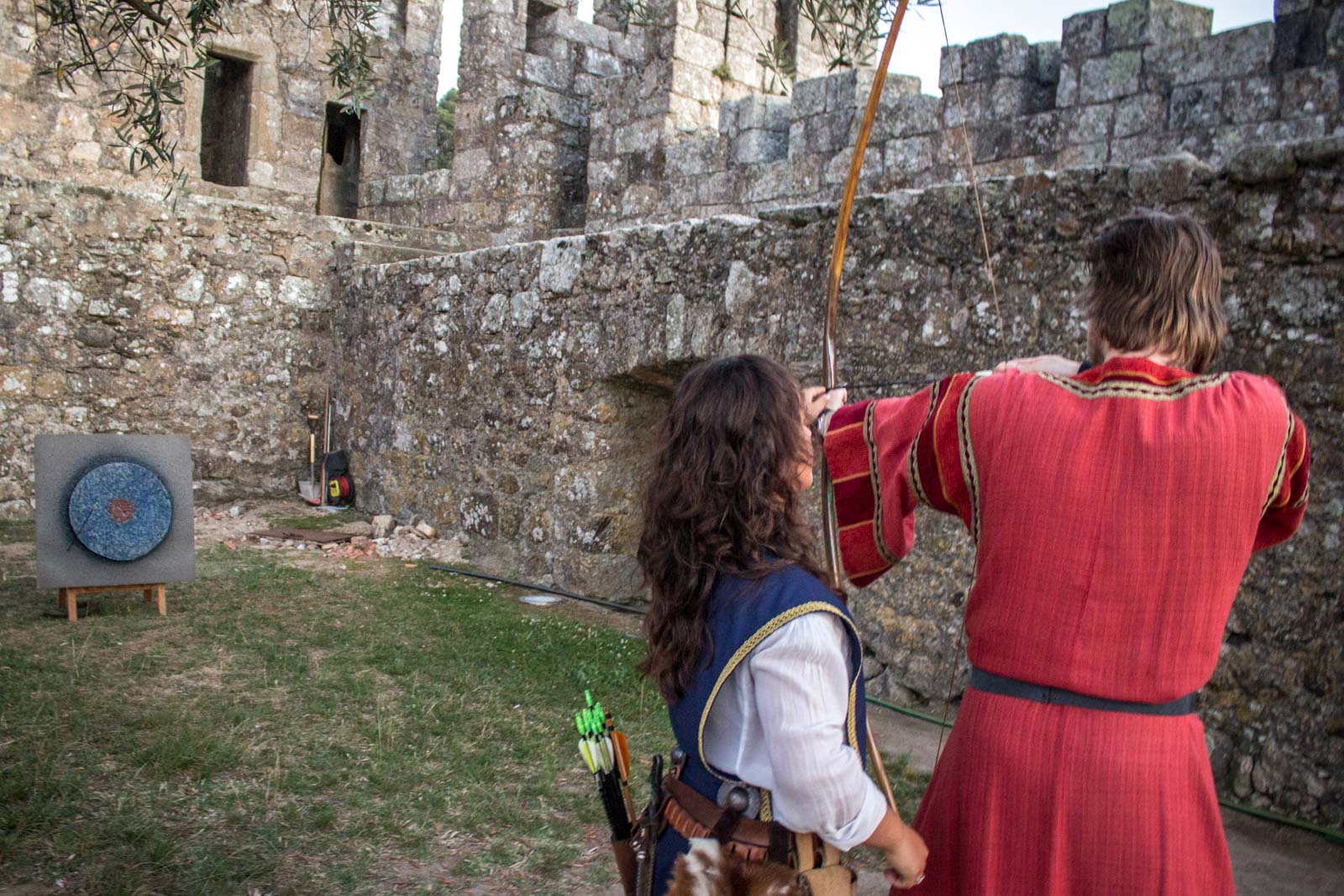 Time for a sword fight next. We moved slightly higher up the castle to a courtyard and I looked around for the armour.

What? This small plastic shield is all I get? What an insult to the great noble family of Time Travel Turtle! If we had a crest or a coat of arms, I would be ashamed to display it on this excuse for battle protection!

It’s just lucky you’re only going to try to strike me with a sword made of foam. 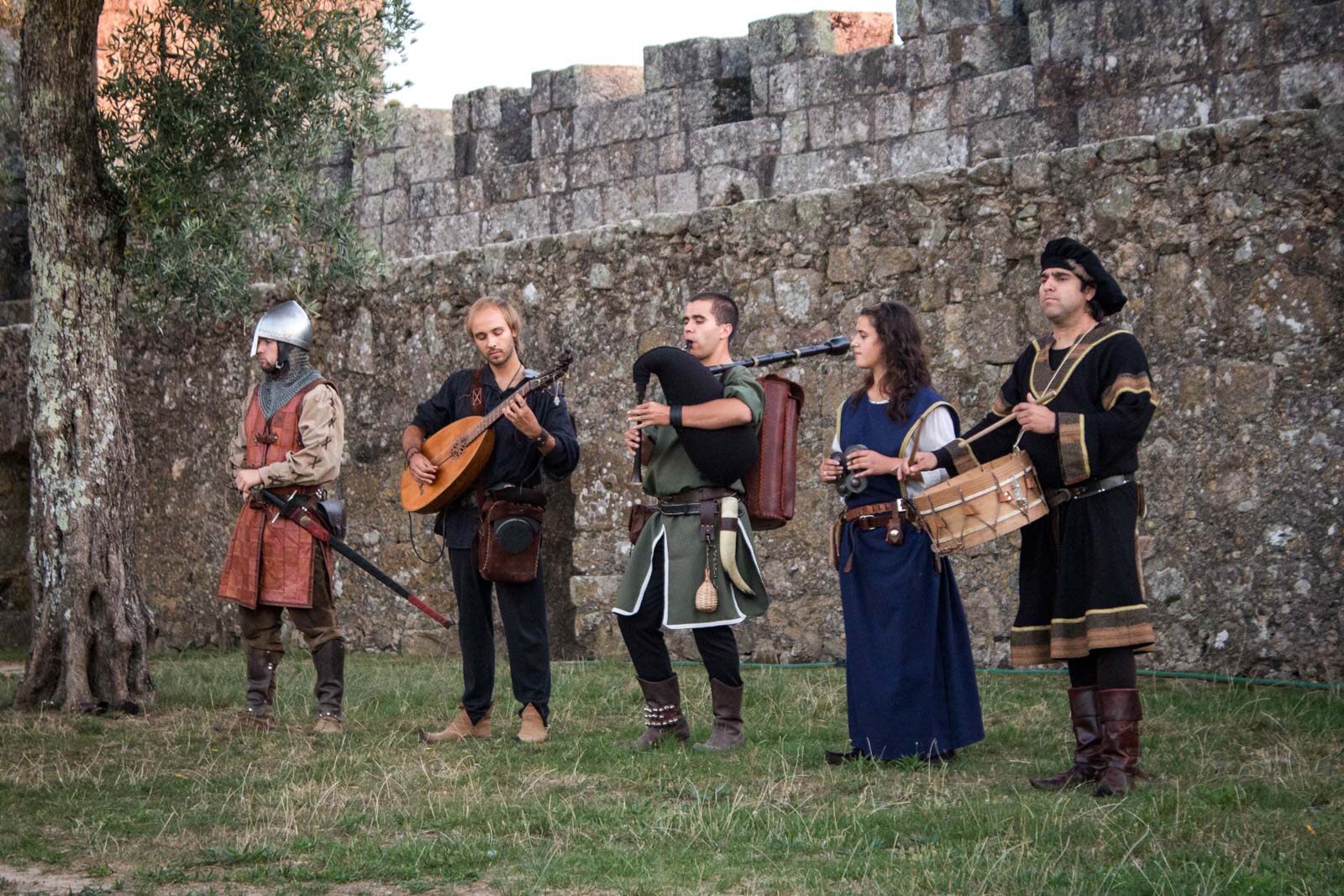 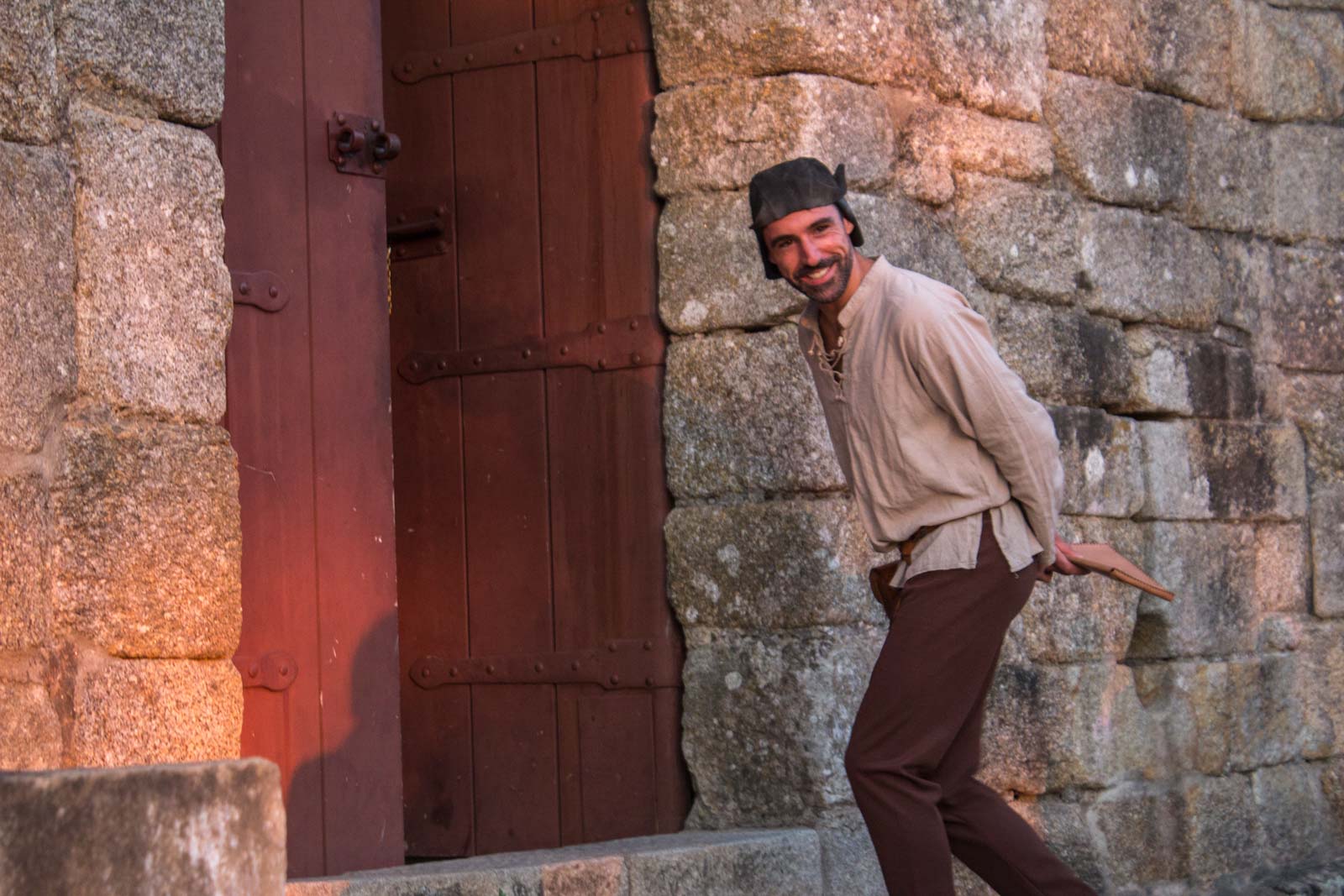 It felt like a fight in a swimming pool where we’re both flinging about flotation noodles. “Marco?” Oh, wrong country. Sorry my Portuguese friends. My opponent hit me on the head – perhaps he knew what I was thinking.

If I could have sworn in his language I would’ve. Instead I just tried to smack his legs, deeming them the most vulnerable part of his body. Not so, it seems. I lose the battle. 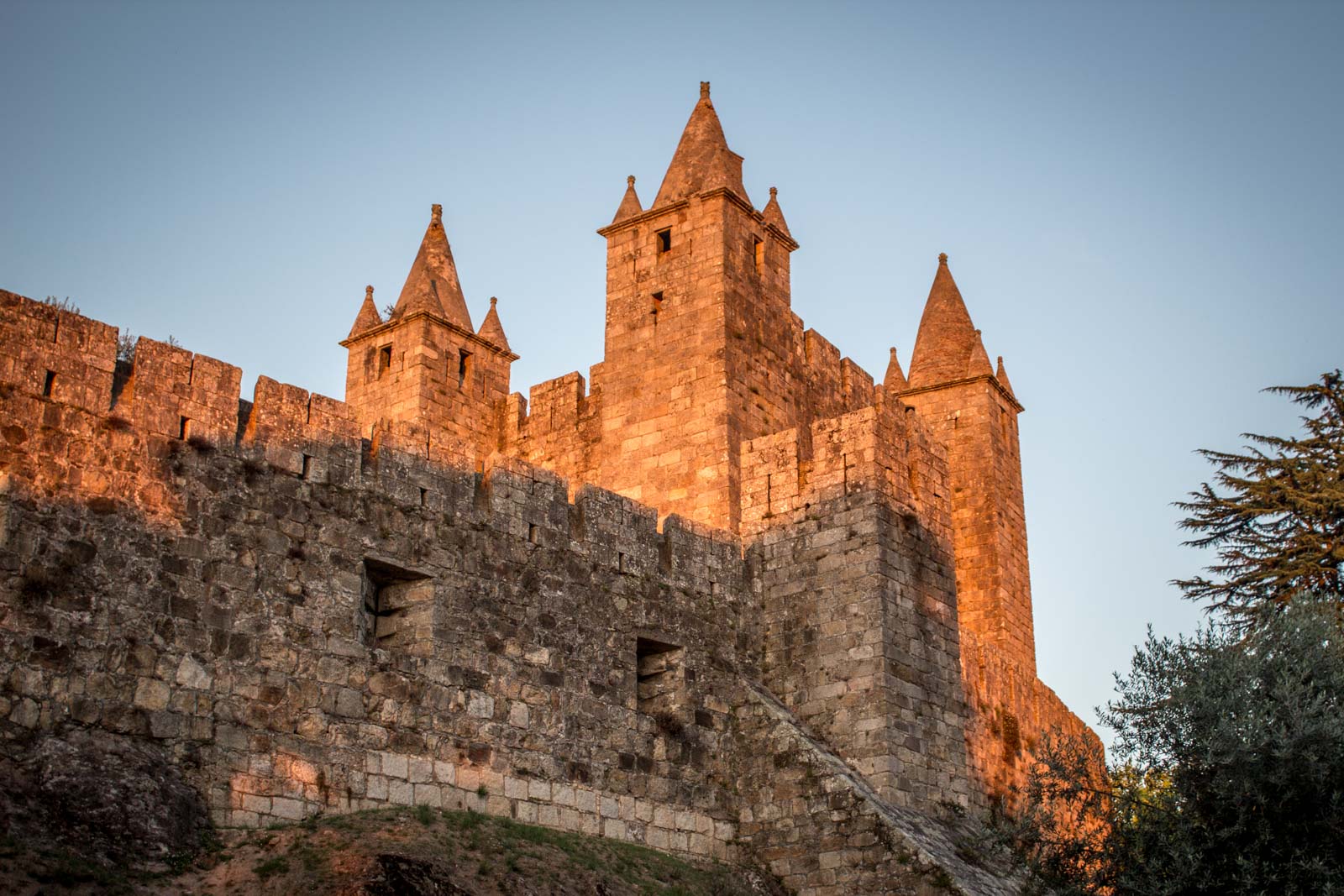 We all moved to the top of the castle, up a stone spiral staircase to the tower. Here I got perspective.

The lands around this castle of Santa Maria da Feira are visible in the last of the setting sun. For centuries this was the stronghold of the ruler of the region. From here they would have surveyed their land, entertained their allies and fought off their enemies.

The battles with the intruders catches my imagination. There was once a moat – perhaps it was filled with crocodiles? There are holding places for the vats of oil – perhaps fries were cooked in them first? You would need fish to go with the fries – perhaps that’s what was in the moat? I’m getting hungry – perhaps it’s time for dinner? 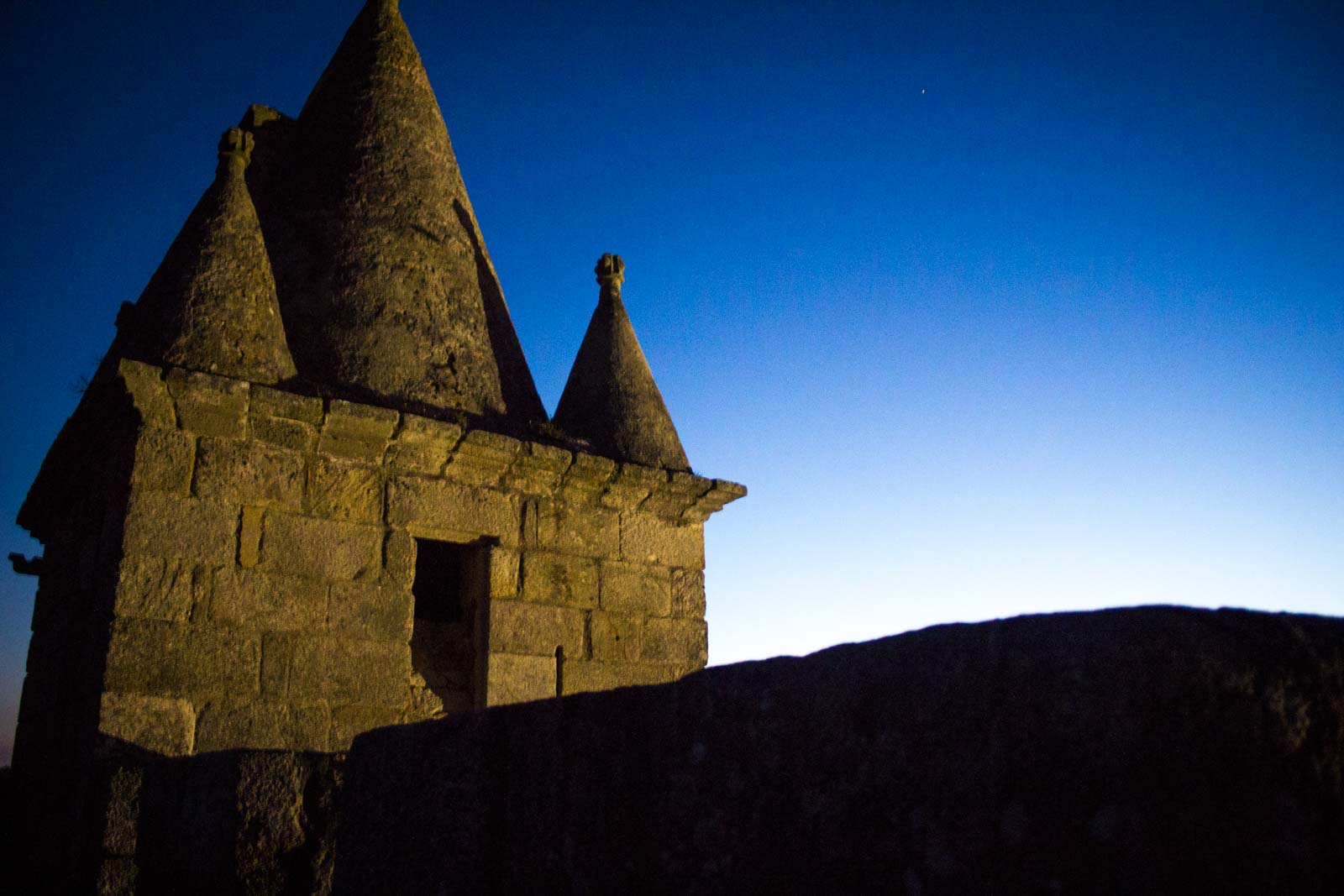 We went back down the spiral staircase to the banquet room. The tables were laid out in preparation for a feast, three of them, with places on only one side, all facing inwards towards each other.  There were half loaves of bread at each setting.

“Those are your plates”, one of the hosts leant over and whispered to me. Normally I prefer a cheese plate, but a bread plate seemed fitting for the times. 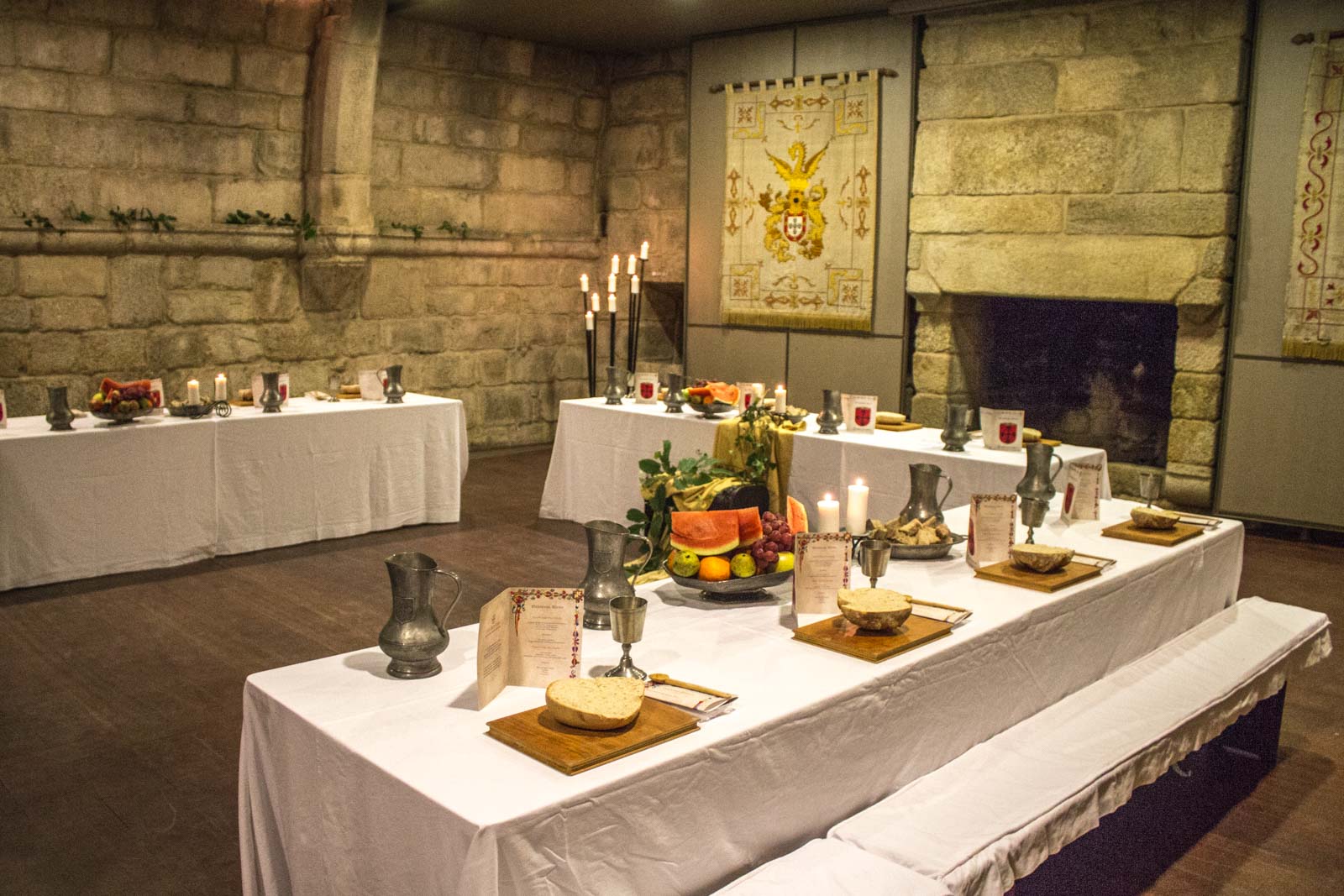 We sat down and I looked at the table closer. The metal goblets seemed authentic, ready to be filled from the large jugs of wine nearby. No water glass, I noticed. Hydration was clearly not so critical for a medieval feast. I think I would have enjoyed living in those times (assuming living did not involve being a peasant and involved the foods we were about to be served). 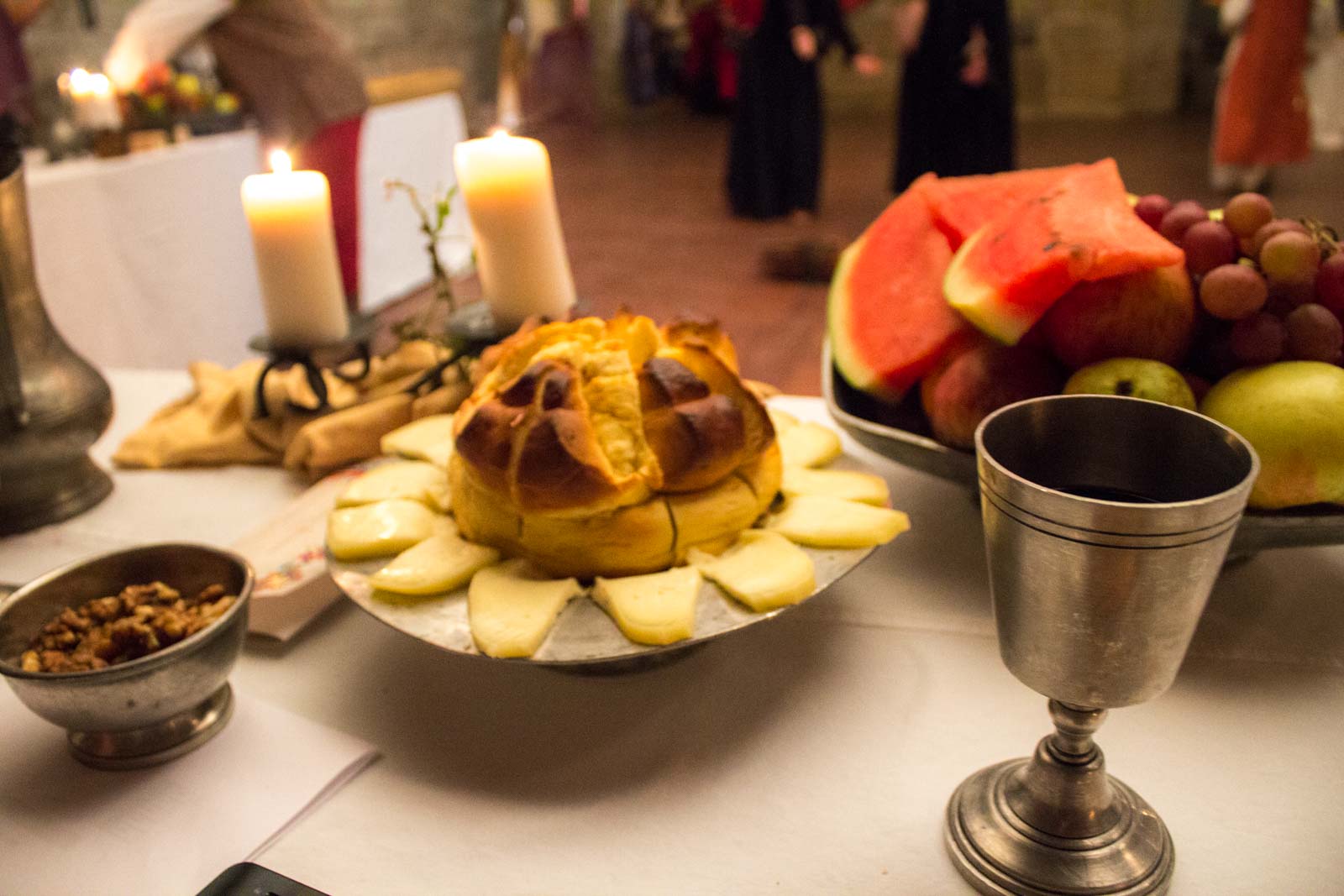 Meats – lots of meats. That’s apparently what a medieval menu involves. There were pieces of sausage, sliced prosciutto, sliced ‘other meats’ (I’m not sure which animal it’s come from) and a large stew.

Vegetables were few and far between, unless you count chestnuts as vegetables. With hands, we devoured the feast, ripping a hole in the bread to turn it into a bowl and complement the meal. All washed down with that wine from the goblets that I told you about. 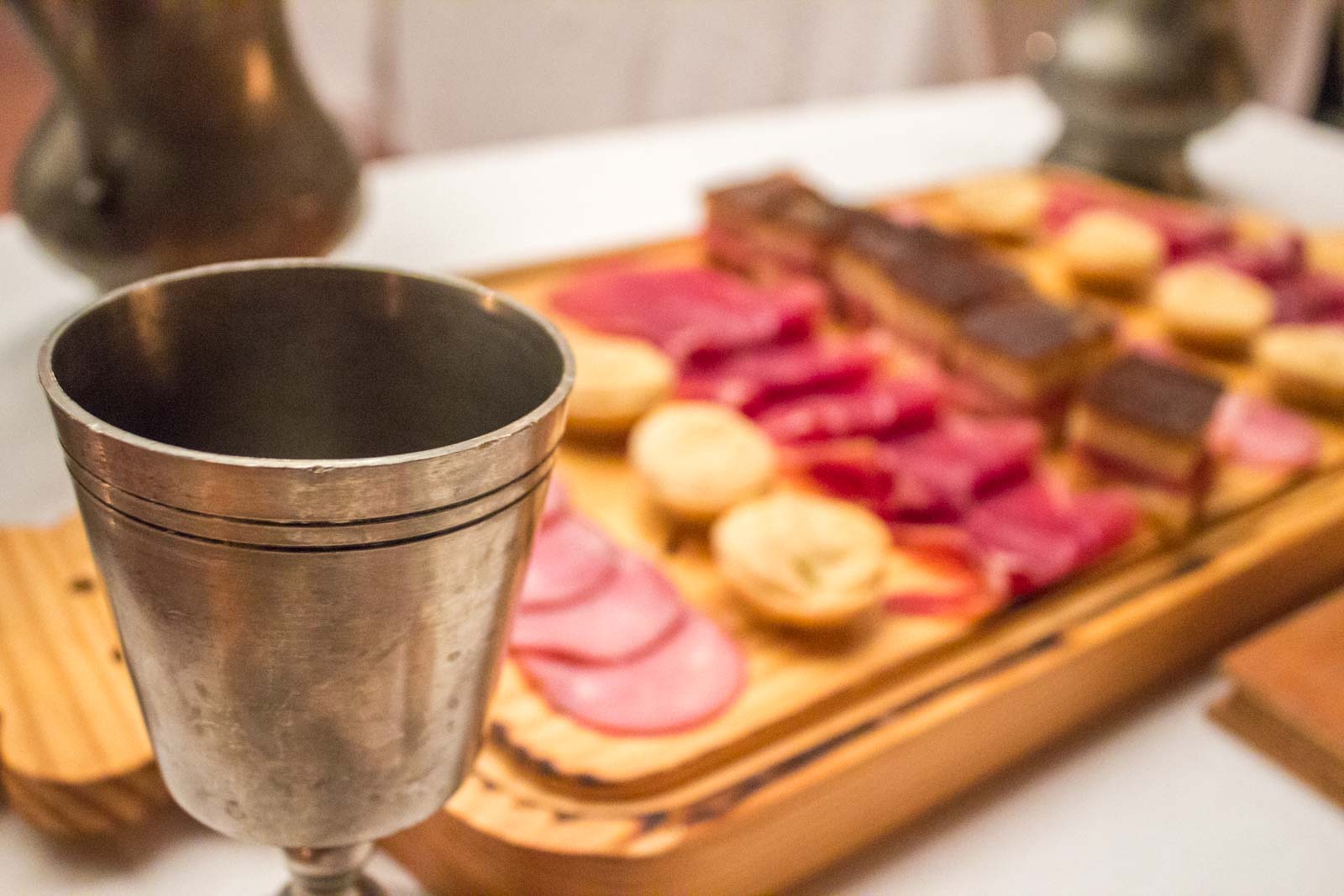 And the whole time we were entertained. I was sitting in the middle of the head table and felt as though I was king with a court of jesters. (If only I was playing cards I could probably do quite well with a king and a pair of jokers.) There were short plays, songs, music, battles, dancing.  All performed by a troupe which outnumbers the guests, the bawdy mingling with the ballsy but never the boring.

After the meals had been cleared away by the waiters – or peasants, or knaves, or whatever a nobleman like myself would have called them hundreds of years ago – it was time for dancing. Together we all joined, sidestepping, twirling, toe-tapping and merry-making. No longer just guests or just diners, we were part of the times and with every step we got closer to the days of the castle’s genuine medieval feasts. 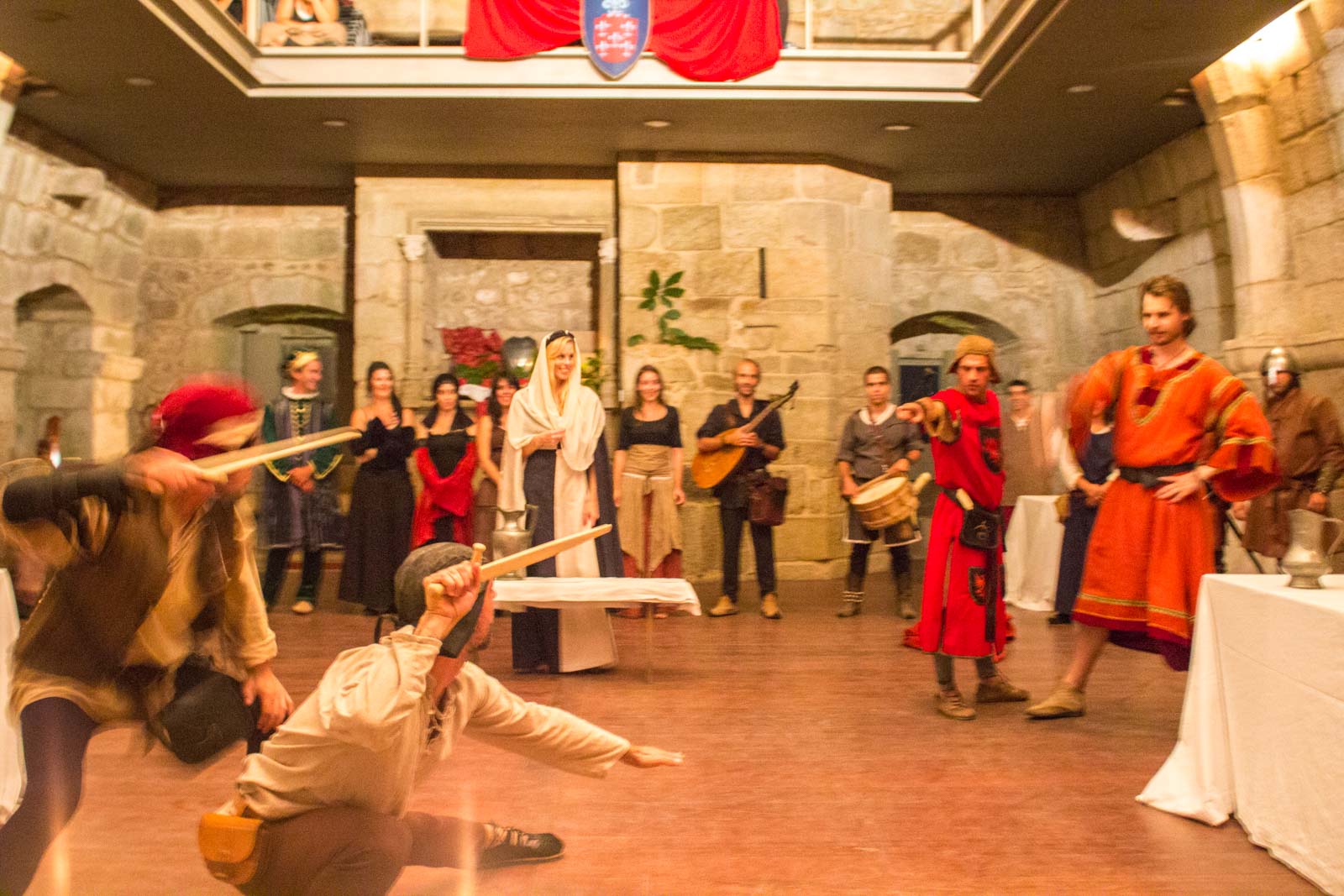 The whole evening was a somewhat surreal experience. Our hosts outdid themselves in the organisation of the event. What could have been tacky and uncomfortable felt authentic and warm.

The aim was to get a taste of medieval in Santa Maria da Feira, where a huge festival is held each August for more than a week and attracts over half a million visitors. That goal was achieved but, to my mind, we learned something more important.

It was an insight into the hospitality and generosity of the Portuguese. Many of the people who helped create the evening were volunteers – all of them were proud to share their culture and their home. 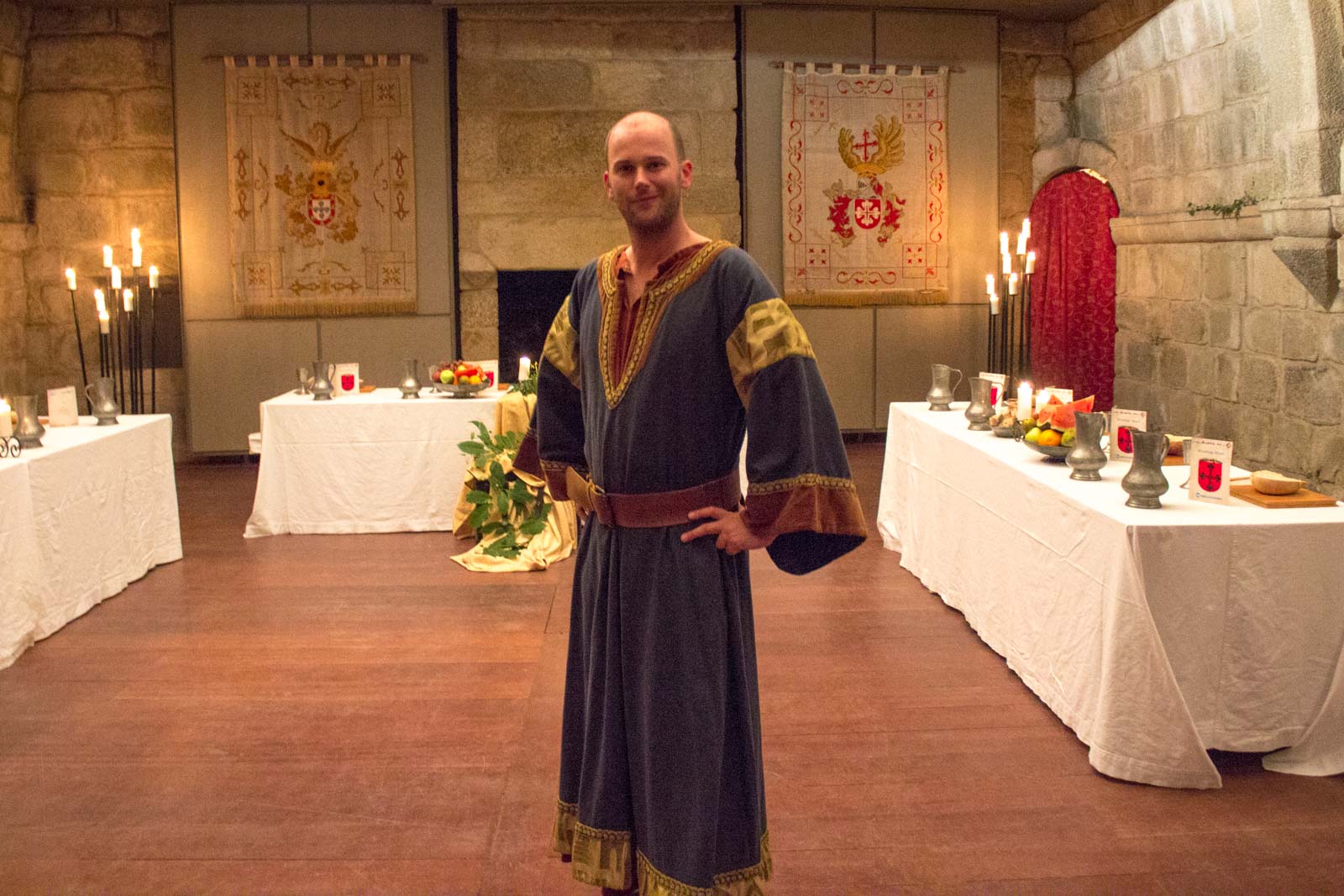 And so there was some disappointment when the festivities came to an end. But the times of our ancestors can only be visited, not dwelled within. And so this brings us to the conclusion of the night and, sadly for me who had become quite attached to my costume, the conclusion of the knight. 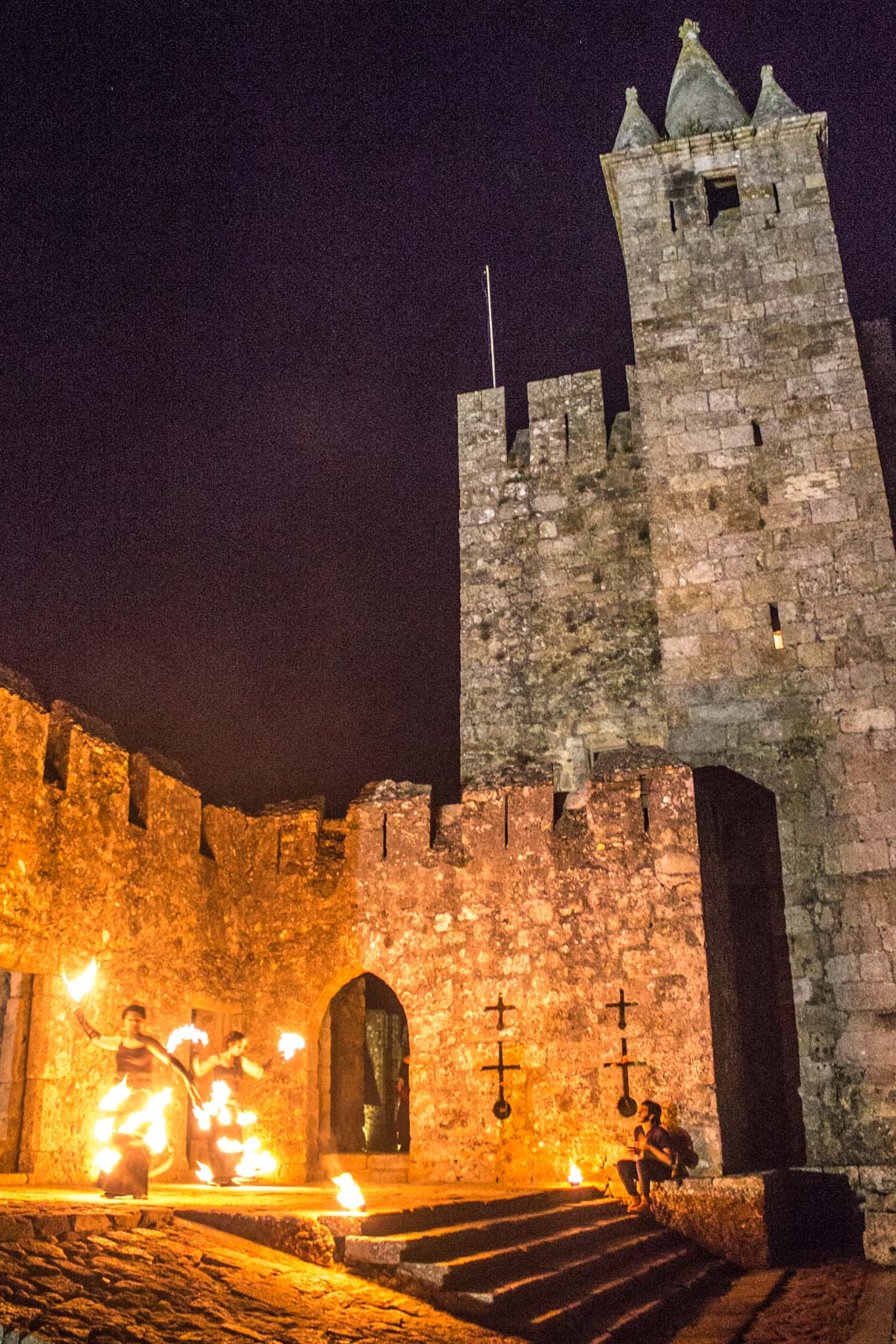 Time Travel Turtle was a guest of the  Porto and Northern Portugal Tourism Association but the opinions, over-written descriptions and bad jokes are his own