Johnny calls out as we descend the last few steps through the bush and into a large natural rock shelter on the side of the sandstone escarpment.

He’s not calling out in English. It’s a language I don’t recognise, but I know it’s one that’s existed since millennia before anyone who spoke English landed in Australia

Johnny is calling out to the people who once lived on this land, to the spirits of his ancestors.

“I’m telling them I’ve got some people who are not from this country,” he explains. “I’m letting them know you’re with me, it’s ok.” 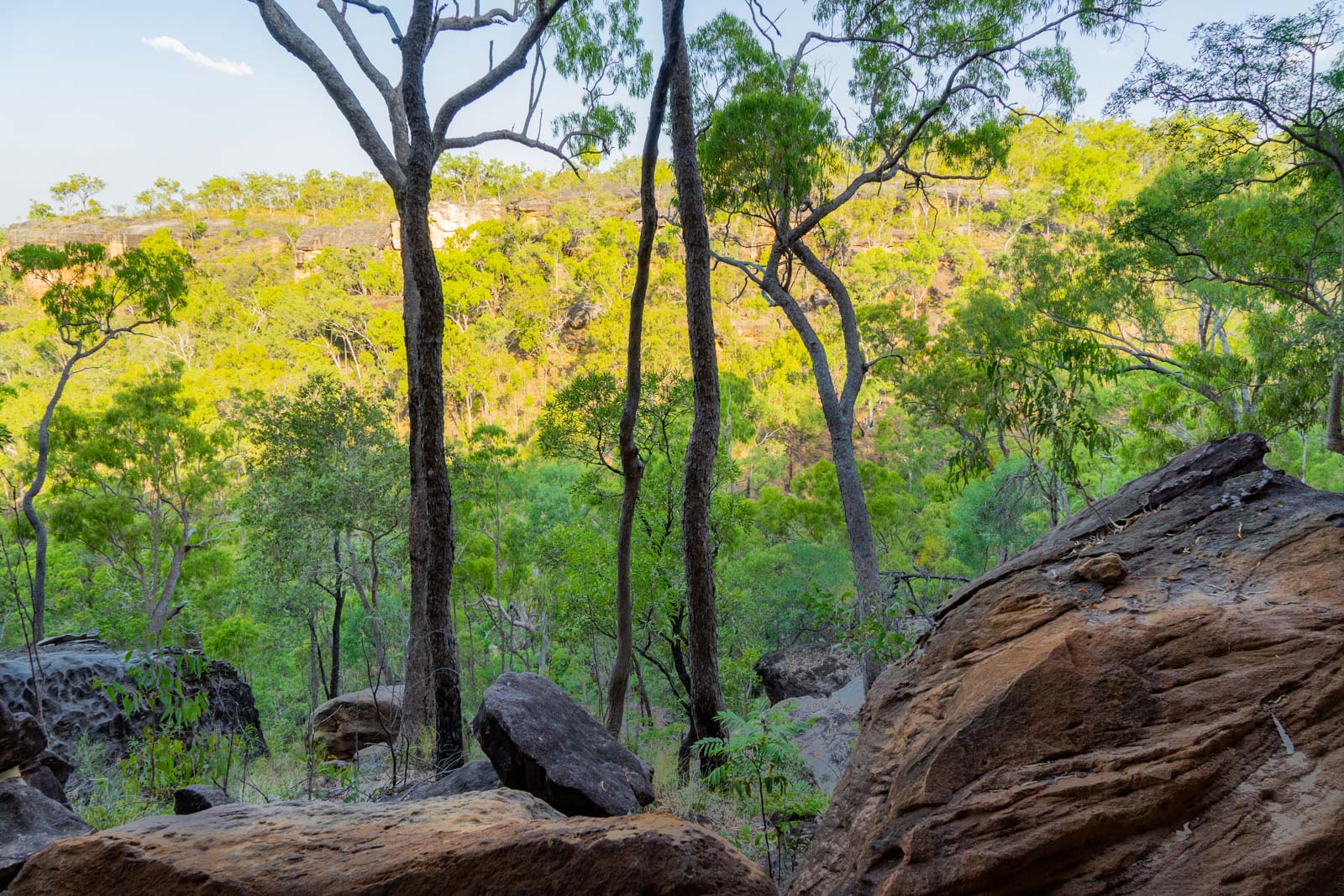 Johnny may not have grown up here but he is descended from the traditional Kuku-Yalanji owners of this land, west of Cooktown and around the small town of Laura in Cape York in Queensland. He describes himself as a Western Yalanji man, or Bama.

With his new company Jarramali Rock Art Tours, he is taking a small group of us to see the paintings that the Kuku-Yalanji people created on their sandstone canvas. Just moments after he has shouted out, I spot the images in the shelter. The paintings are large and vibrant. The ochre colours, contrasted with whites and blacks, jump out from the sandstone. And they stretch out for further than I can see at first.

Even if Johnny hadn’t called to his ancestors, you would probably feel their presence. Because what they have left of the rock faces are not just pieces of art – they are an insight into their life. 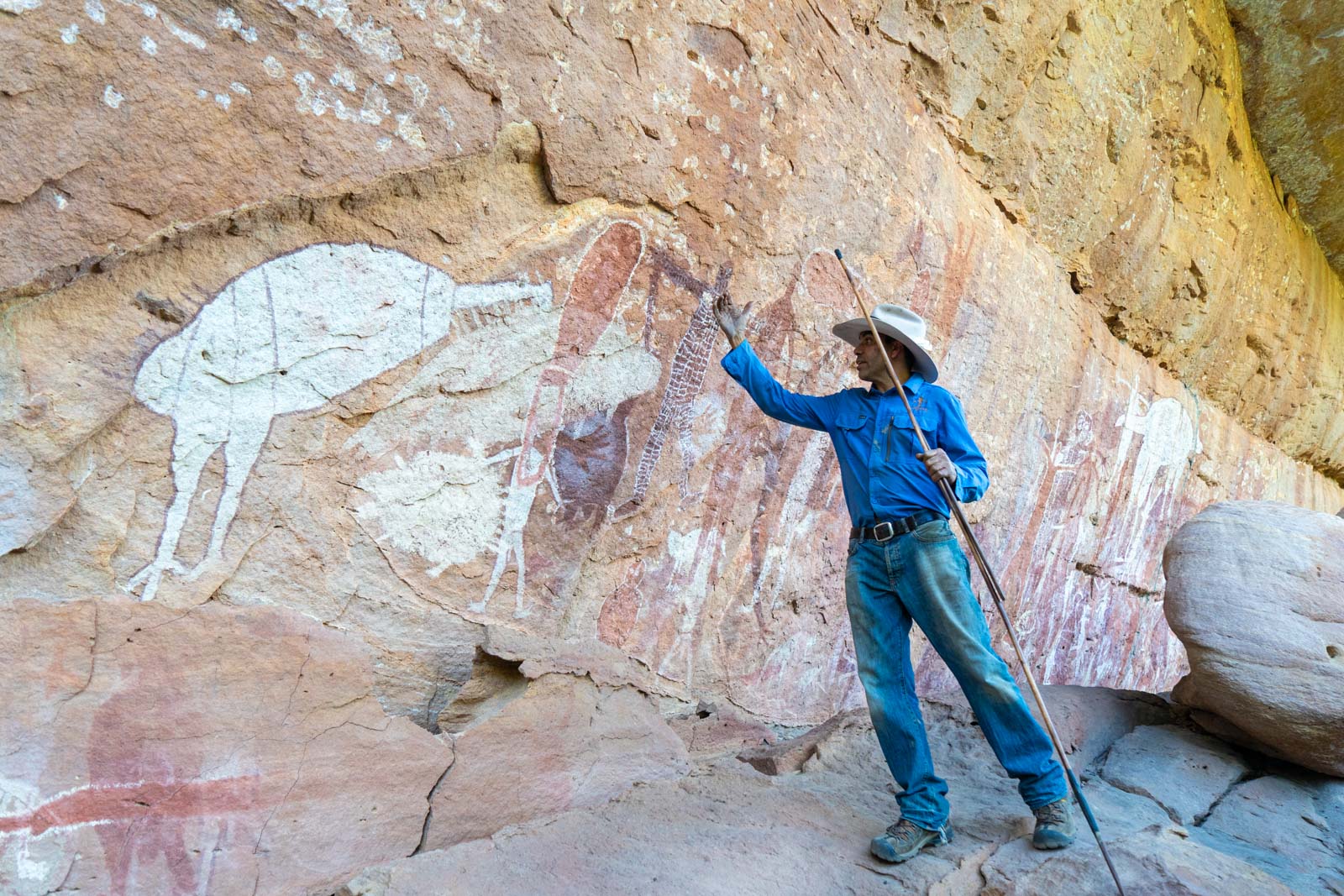 On this warm afternoon, the sound of kookaburras laughing over the top of the rustling of leaves in the wind, you feel transported back to a time when indigenous Australians lived on this spot. 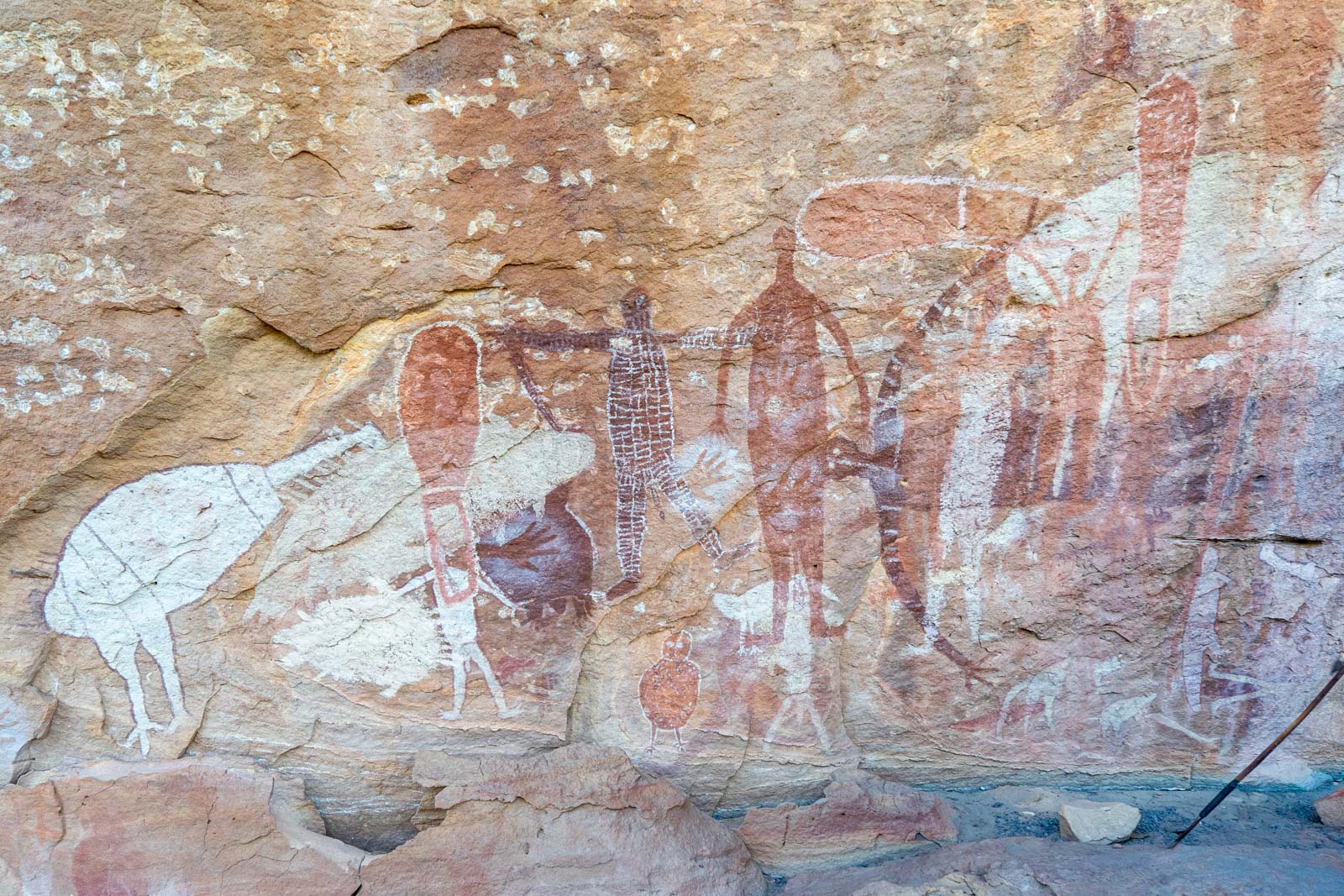 And if the setting creates the atmosphere, the rock paintings give the specifics. Johnny starts to point some of them out and explain the context.

“So you’ve got these aquatic creatures,” he says, gesturing.

“Eel-tailed catfish, long-necked turtle, barramundi. And you’ll find these ones if you walk two kilometres that way to the east, you’re right on the Mossman River system. Big water holes, good fishing.” 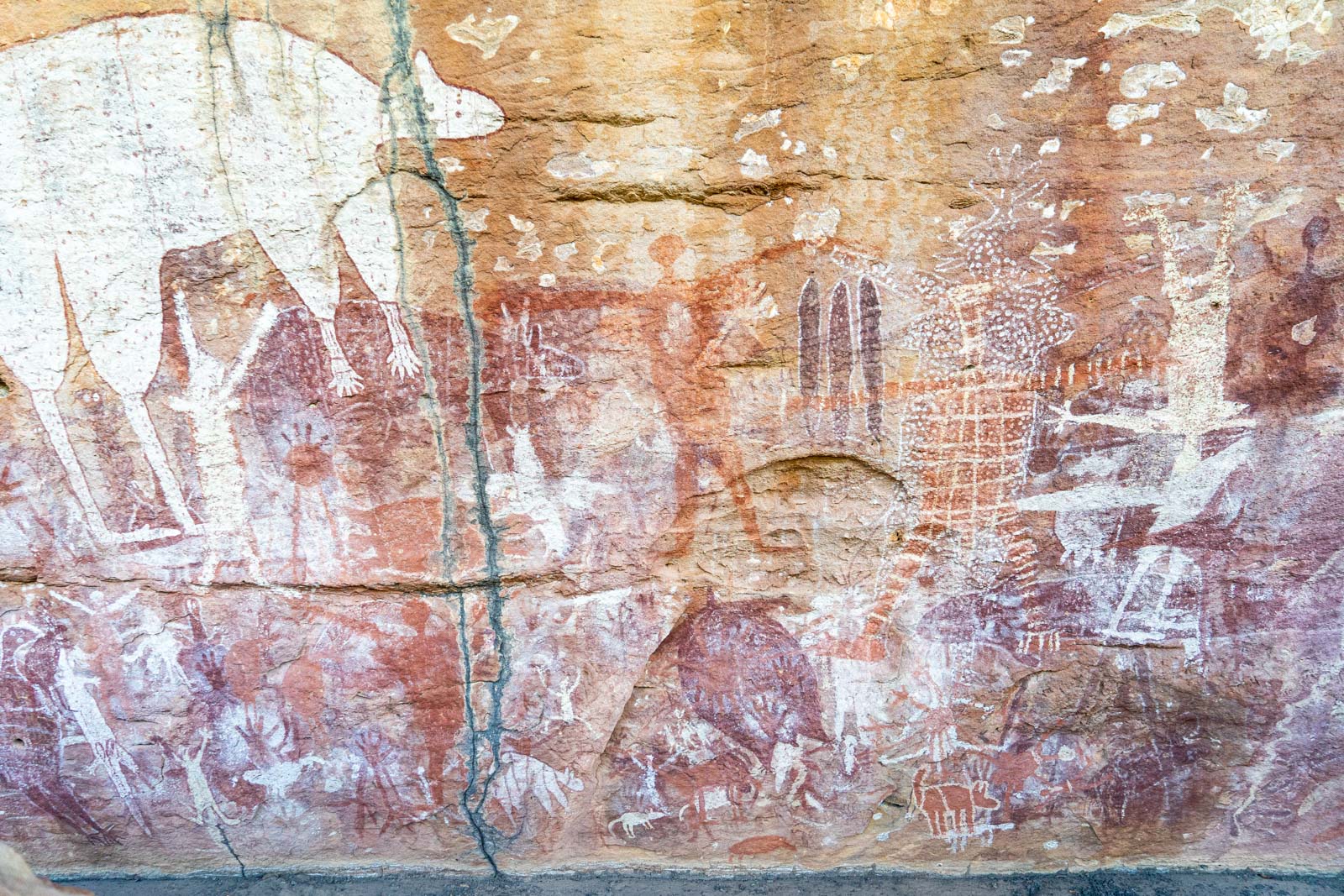 The Kuku-Yalanji people who lived here probably cooked some of those fish in this very rock shelter. You can see the charcoal evidence that they had fires here. Researchers have also found mussel shells and bones from animals like kangaroos, possums, bats, and flying foxes.

“Before miners came and cut down a lot of trees and the cane toads came and started knocking down the wildlife numbers, this was a place of abundance and plenty,” Johnny says. 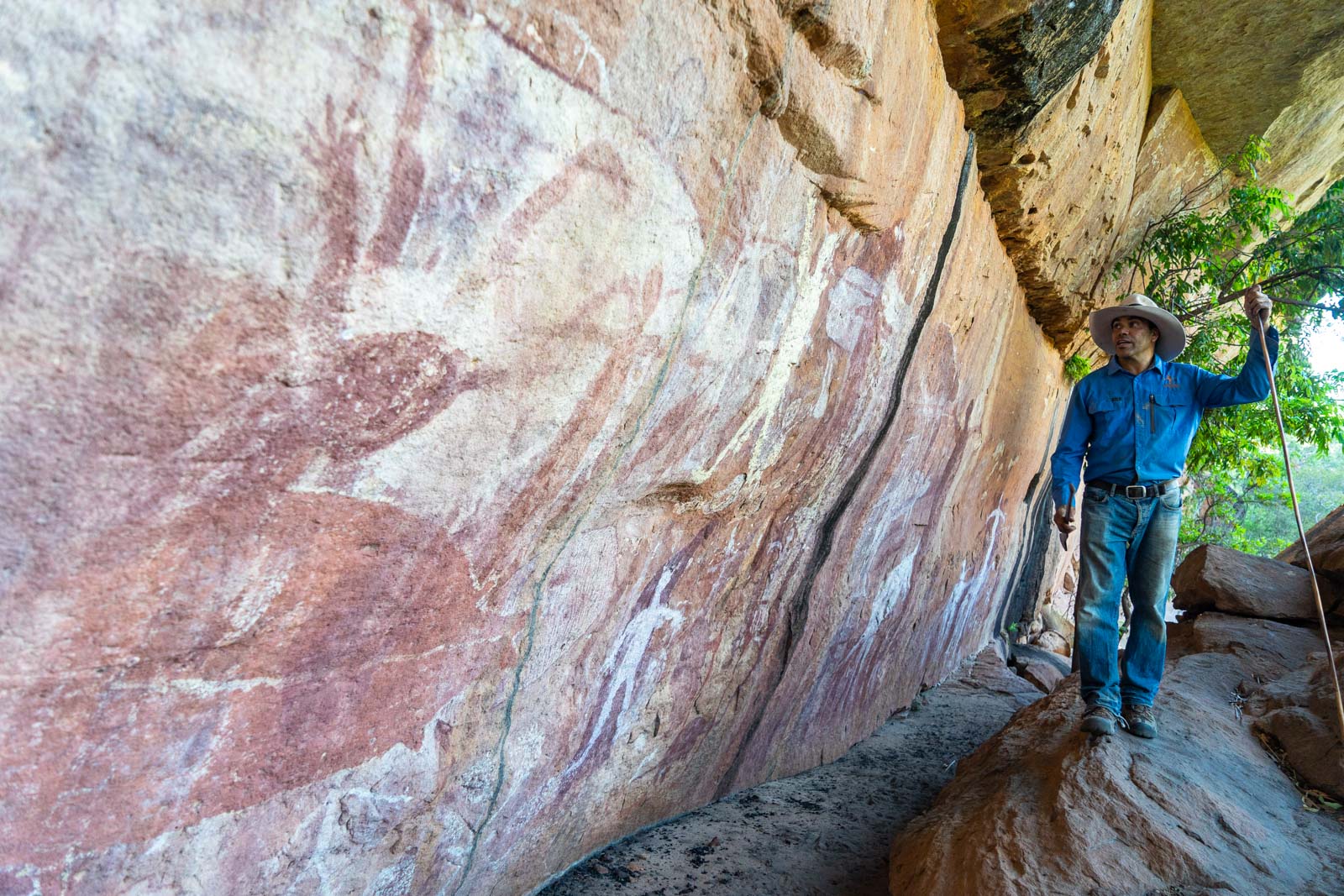 He’s talking about the tens of thousands of miners who came in the Palmer River Gold Rush of the 1870s. They eventually left, of course, but the damage to the environment was done. But, quite remarkably, the rock art remained unscathed.

In some ways, I think it makes these paintings even more special. Untouched by modernity, many still seem to be in perfect condition without any intervention or protection. The most recent ones are about 1200 years old – but some have been here for at least 20,000 years (they have faded but are still visible). 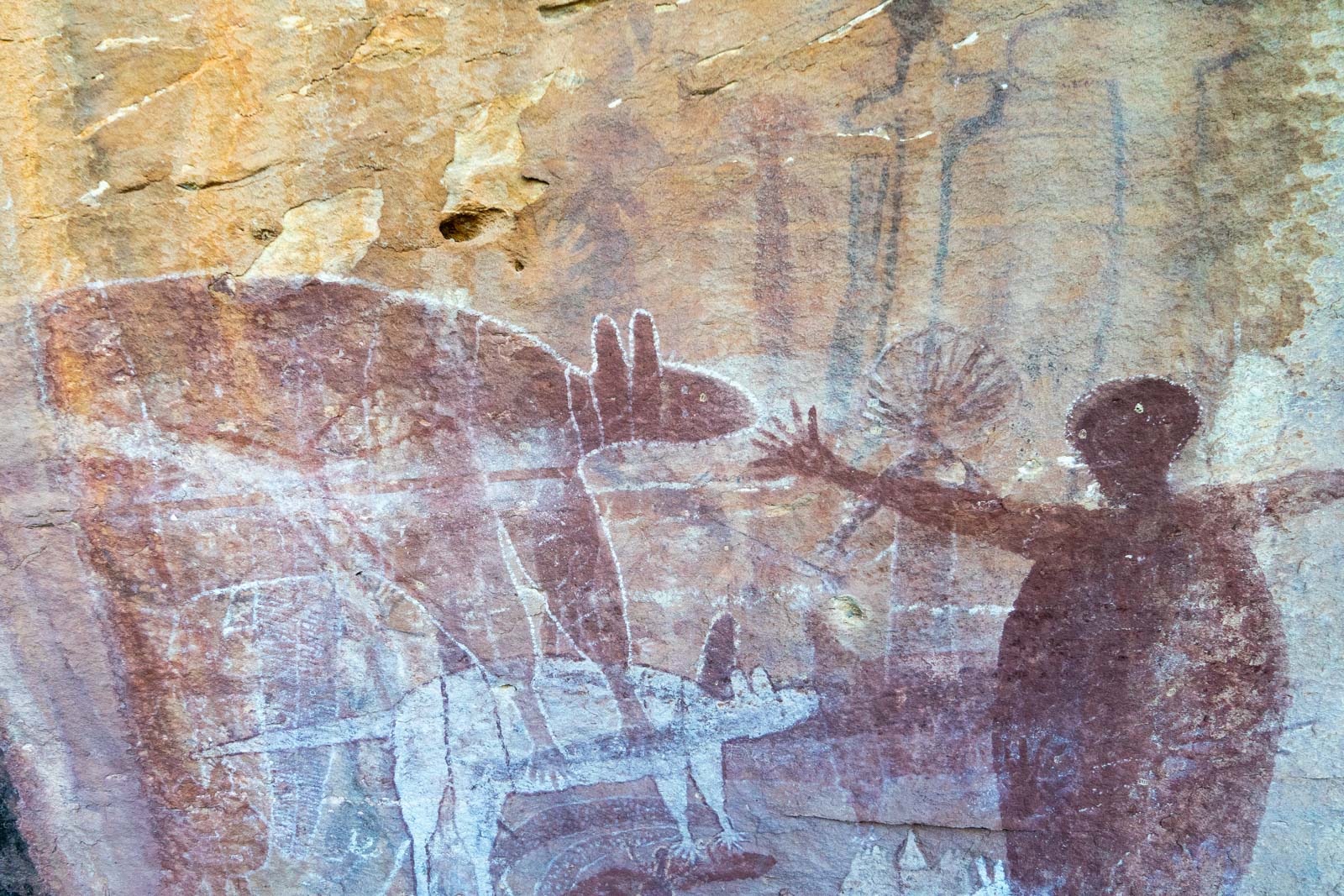 This particular rock face that Johnny has brought us to is called Magnificent Gallery – “and I can’t find a better word to describe it,” he says as an aside.

There are about 450 pieces of art on this wall but it’s just a tiny fraction of what you’ll find in the Laura Basin. It’s estimated there could be up to 10,000 rock art sites, each with its own gallery telling the stories of the original owners. 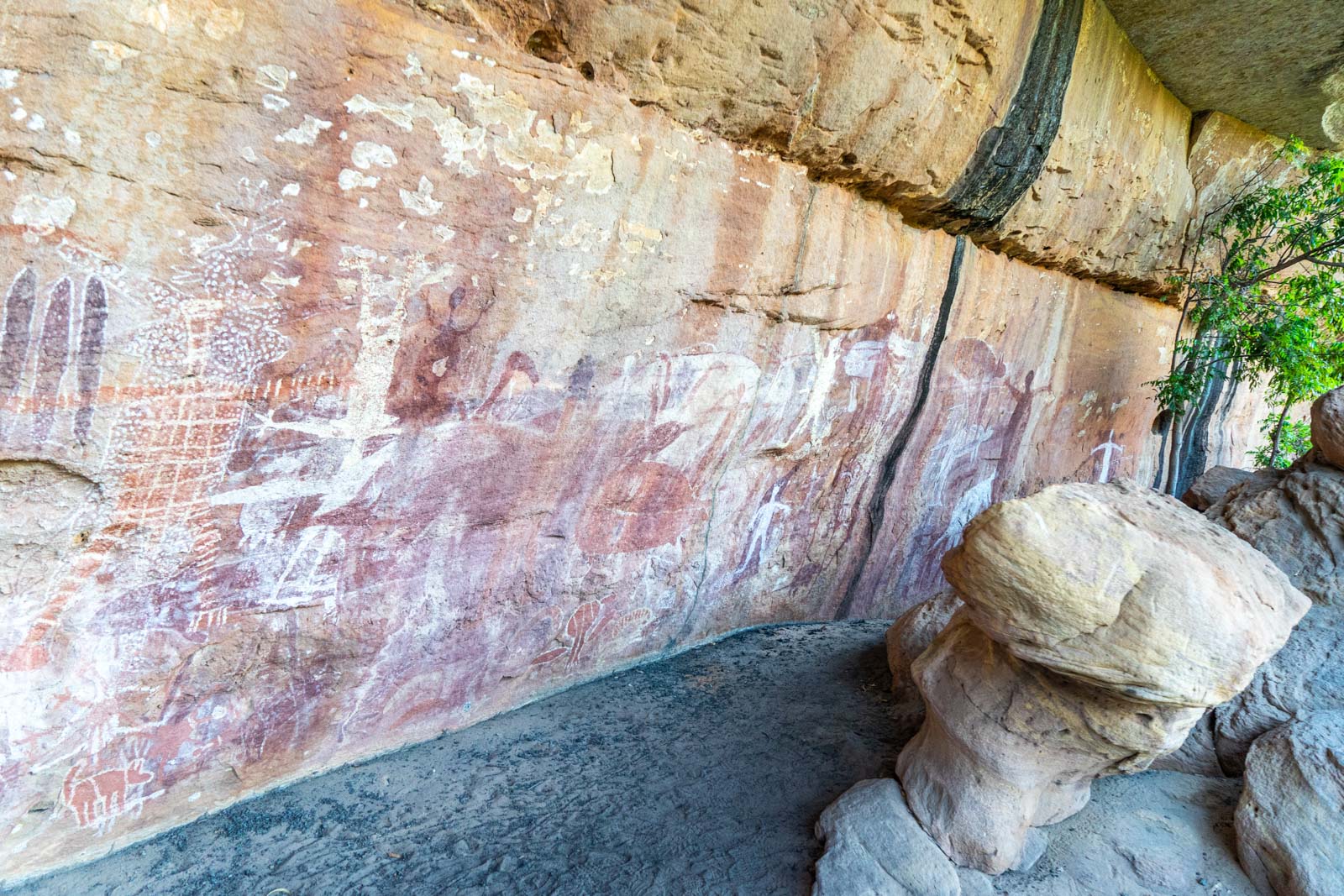 The area where you find these galleries is often referred to collectively as Quinkan Country, named after the Quinkan spirits that are depicted as human-like figures in the paintings. There are a lot of them on the wall here, amongst the large kangaroos and other animals. 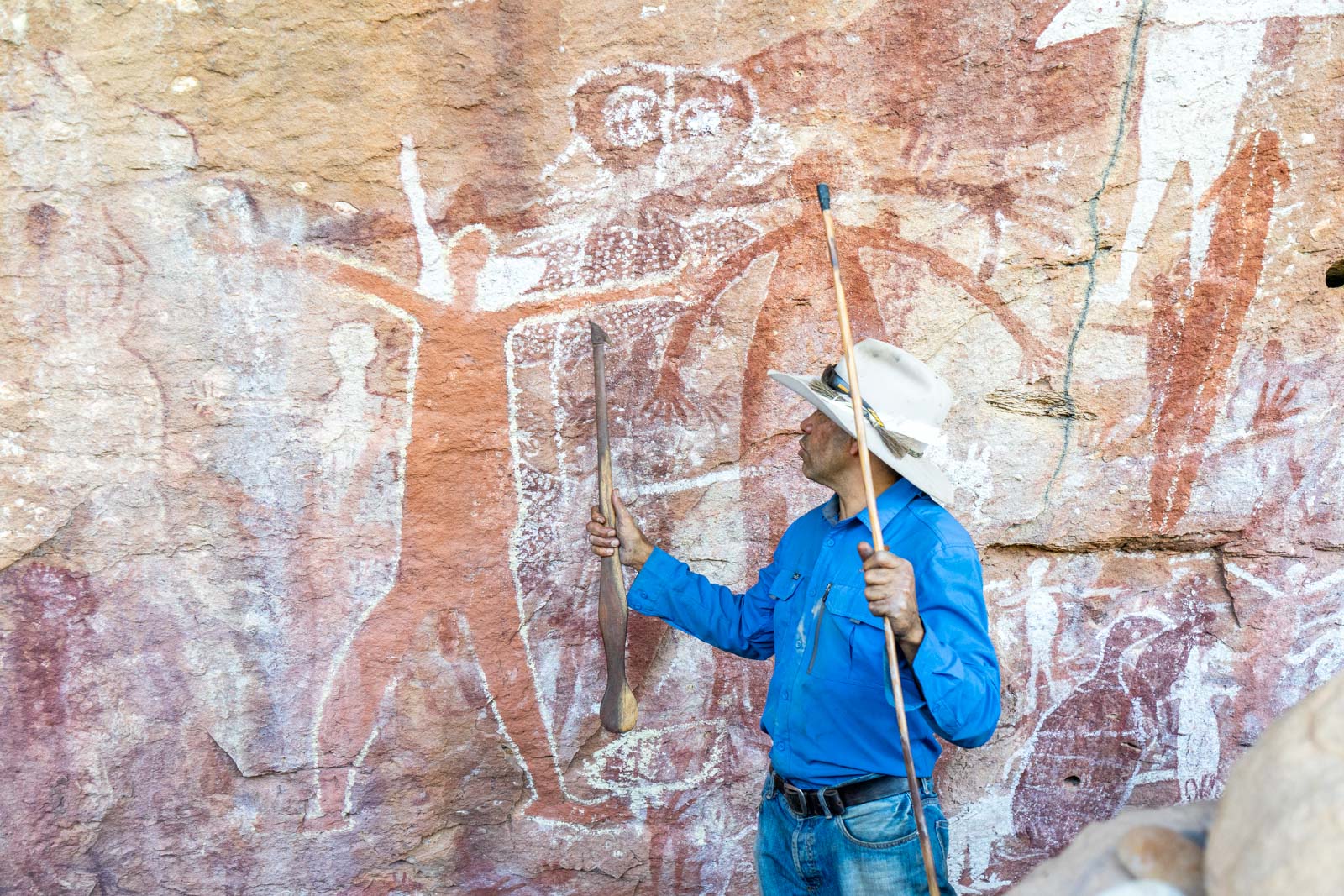 Some of the Quinkans are good and some are evil. I stare up at one, wondering which it is, as I also wonder whether it is staring back at me. 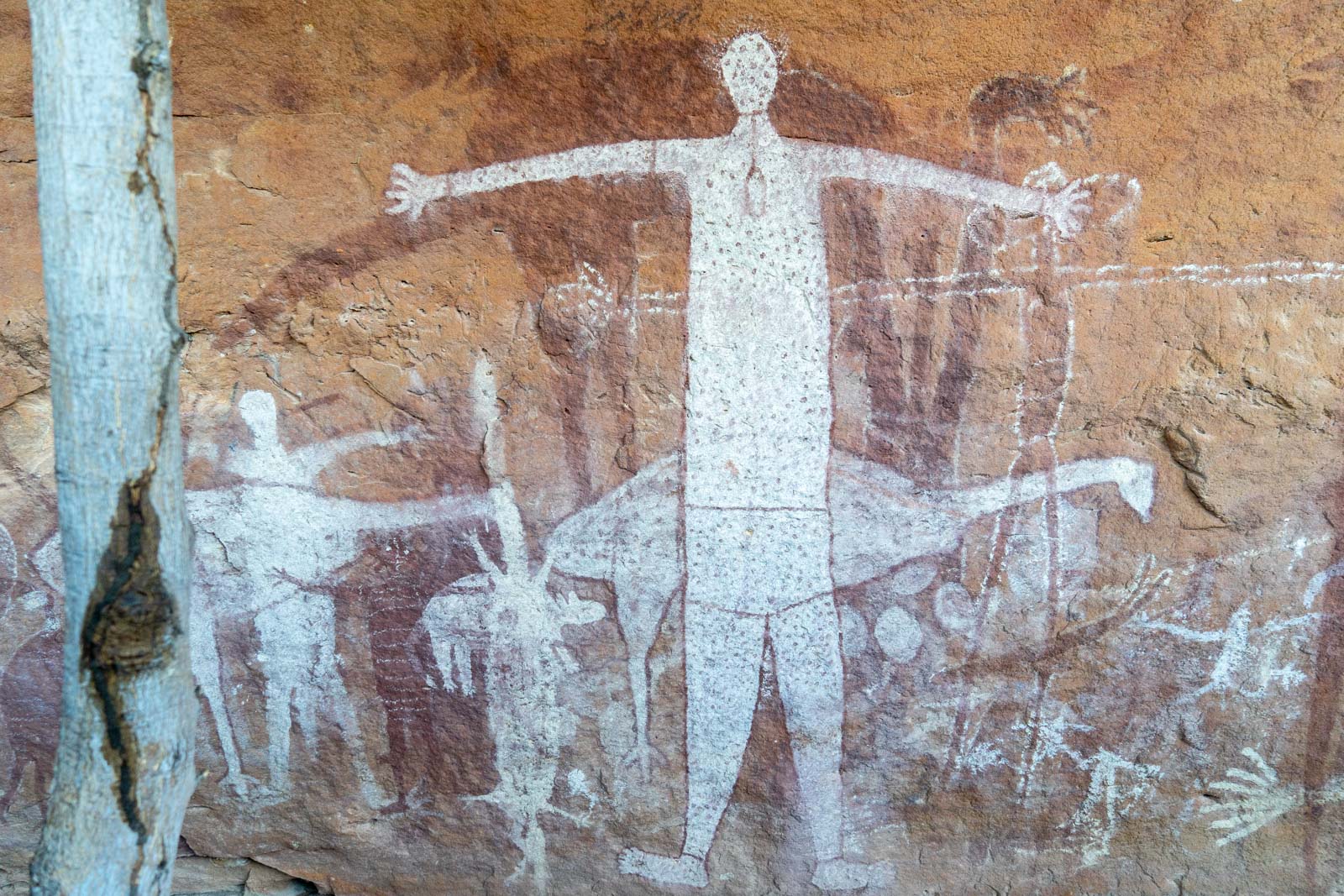 The depictions of the Quinkans here at Magnificent Gallery are among the best in the region. They seem so lifelike yet, at the same time, otherworldly. The way they were painted makes them seem to almost levitate off the sandstone, as if they have been caught in a transition between dream and reality.

But it’s not just the artworks themselves that are so special. It’s the whole experience here which adds to the spirituality of the story. 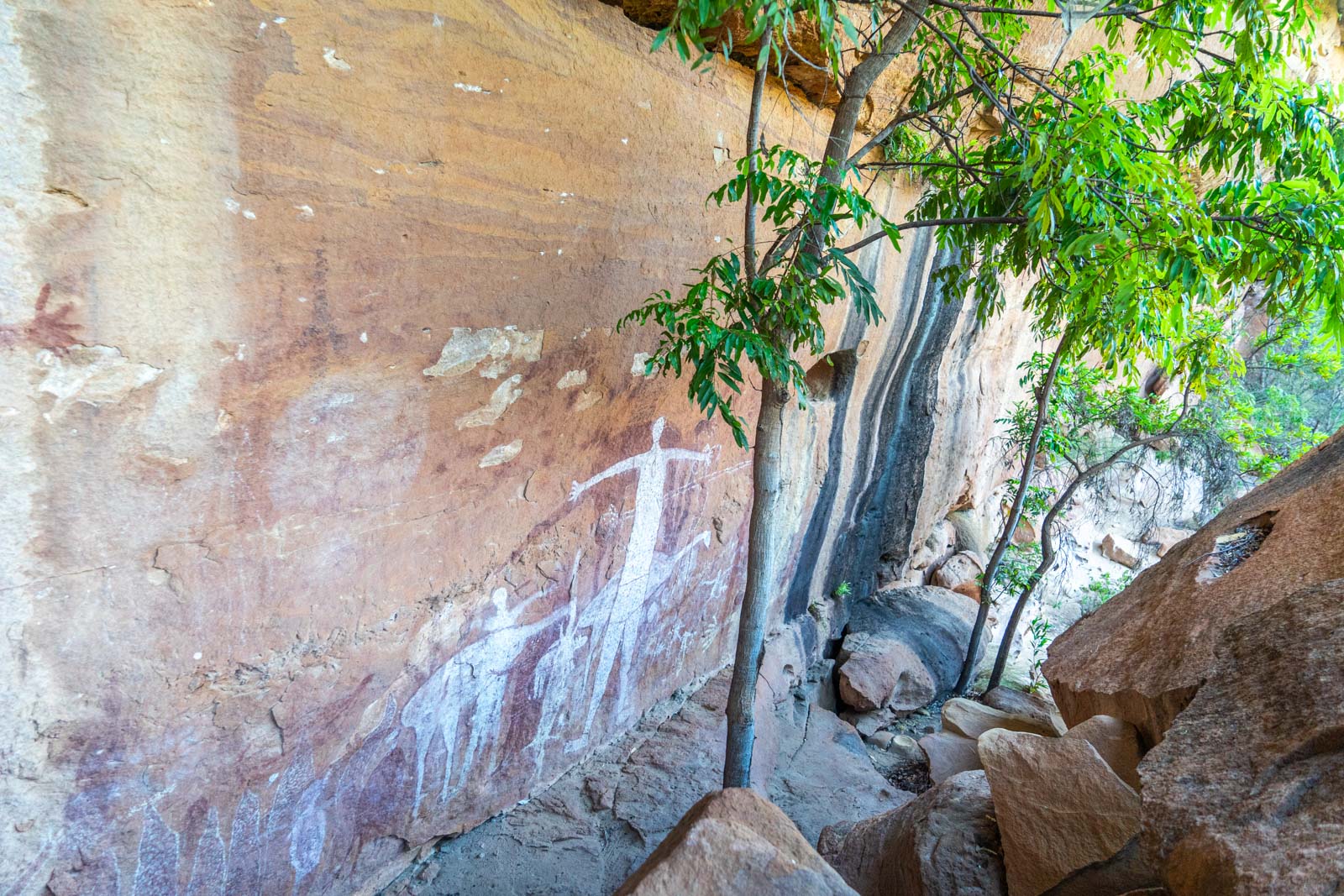 A few of the Quinkan Rock Art sites near Laura are open to the public. Split Rock you can visit on your own, for example, and the Quinkan Galleries is a popular tour from the Quinkan & Regional Cultural Centre in Laura. But visiting these relatively easily-accessible sites feels like the tourist experience it is.

What Johnny has done is create an adventure that is, by its logistics, exclusive. He is the only person who brings visitors here, and his maximum group size is only 10. Access is in his large 4WD truck, along a 90-minute rough track from the turnoff at the highway. Even if someone knew this rock art was here, they would have trouble reaching it. 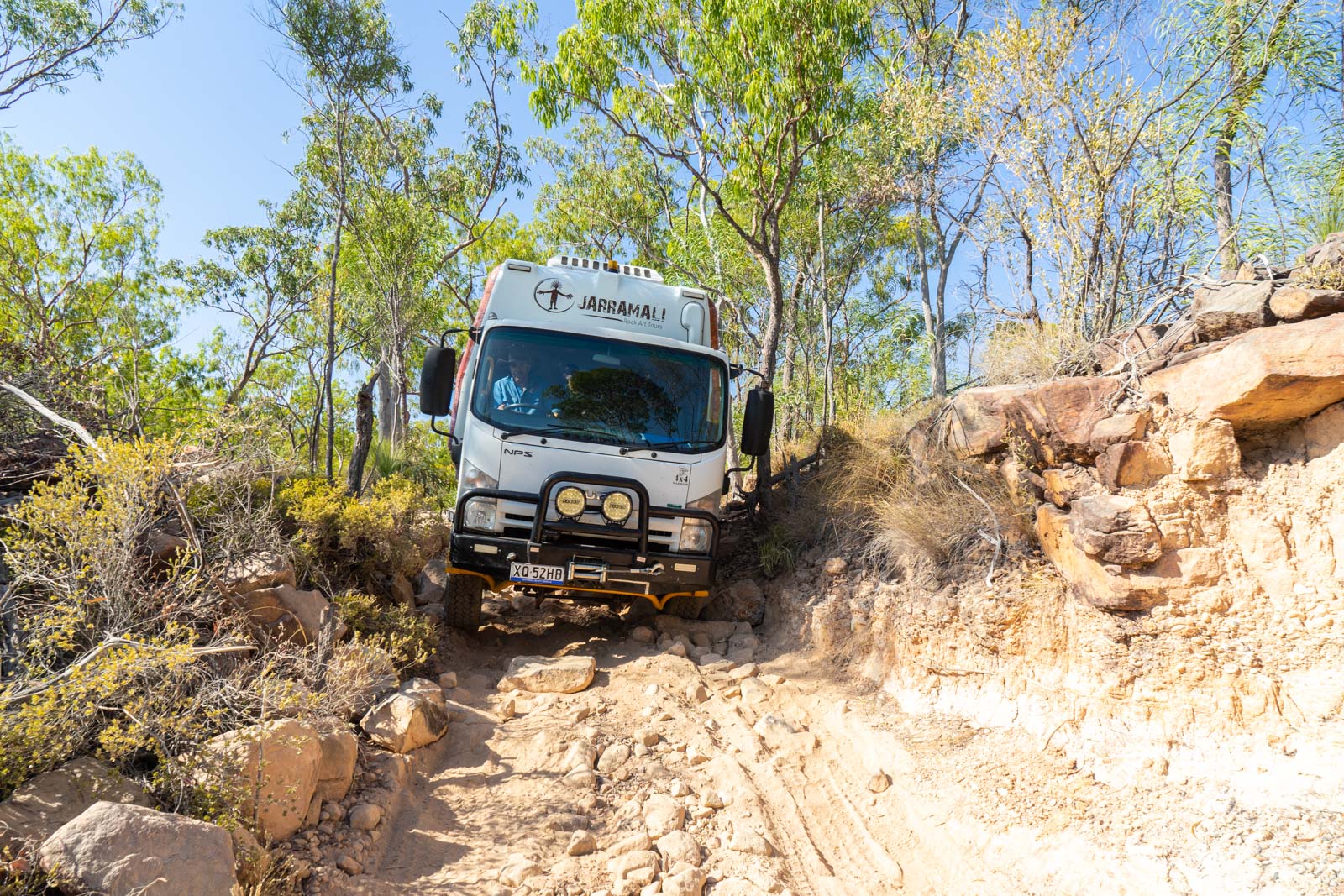 But, beyond that, what also makes Jarramali Rock Art Tours special is that it’s an overnight experience. For one night (or two), you camp on the top of the escarpment, surrounded by the nature that was the home for the Kuku-Yalanji people for tens of thousands of years. Even in just a short time, I feel a connection with the land. Johnny has built a large comfortable structure where we hang out and eat our meals. I sit on the deck, gazing out at the escarpment, watching the colours of the rock change with the movement of the sun. 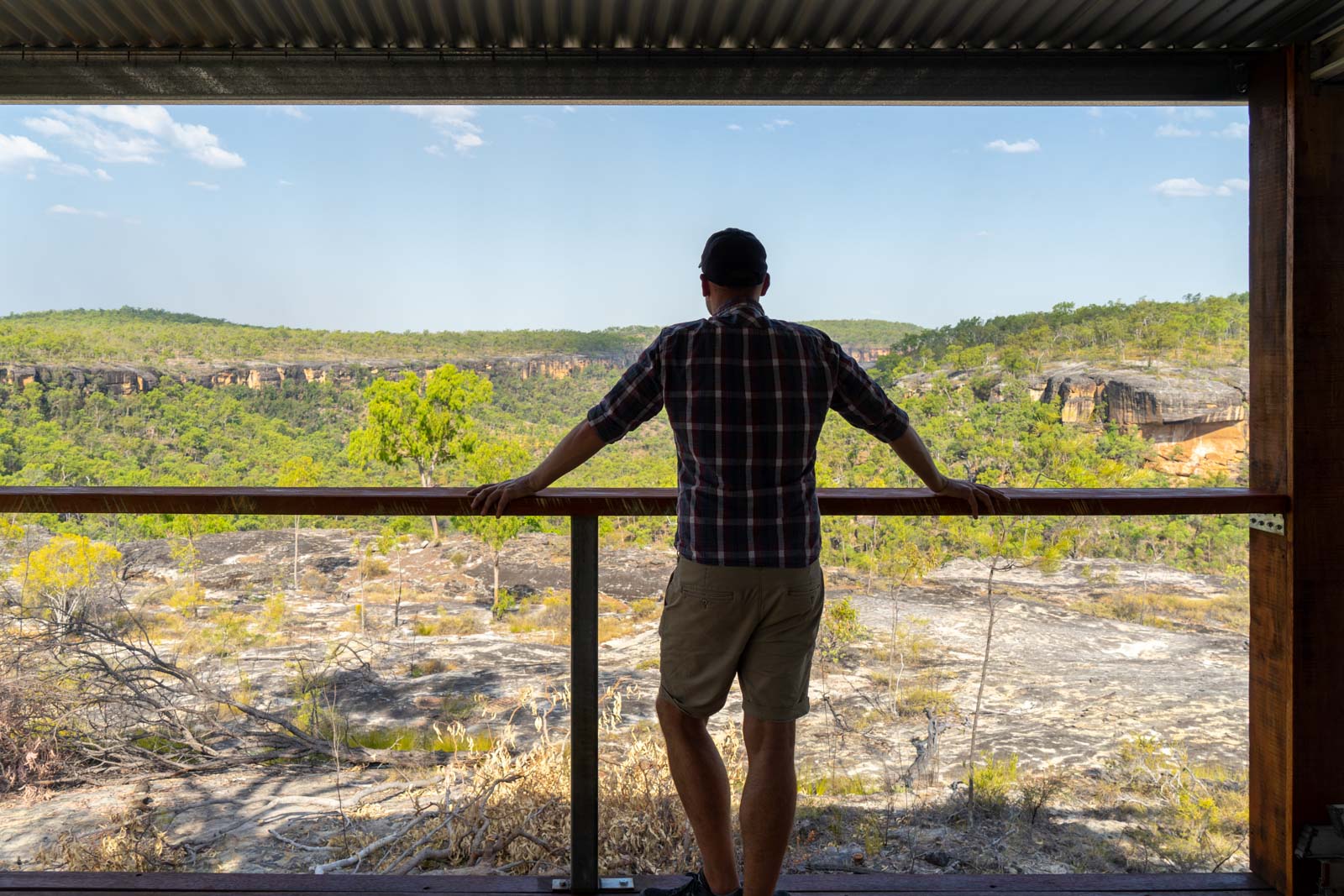 At night, sleeping in a tent, the light from the moon and the stars shine in through an open window. In the morning, as the sun rises, the land seems to wake up in front of my eyes.

You can see why the indigenous people who once lived here were inspired to paint their world onto the rocks. It’s just too stunning to simply admire passively. You need to engage with the landscapes somehow.

But a trip like this into Quinkan Country is obviously about more than just the nature. It’s also about the heritage and the spirituality. You see that come through in the paintings. You feel it when you stand at the top of the rock and look out at the bush stretching out beneath you. And you understand it when you spend a day talking to Johnny about his family’s land. 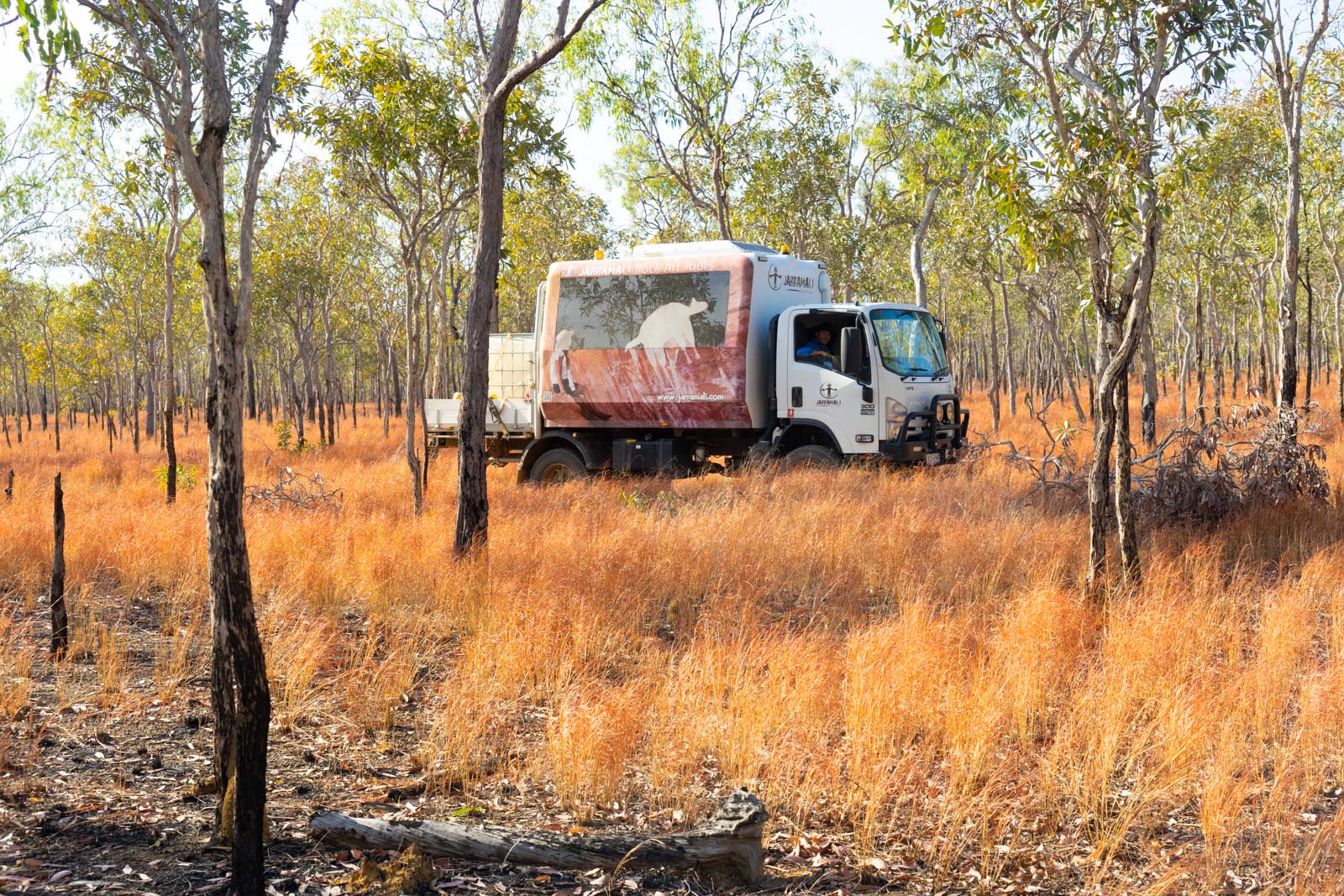 On the way out, bumping along the rough track in his 4WD again, I ask him why he set up this new tour and what he hopes visitors get out of it. He answers with a series of questions.

“Did you leave a better person?”

“Did you leave a better version of yourself?”

“Did you appreciate that culture, those stories, and that experience from our perspective?”

“Did you understand our way as you sat down and you learned?”

I hope I can say yes to all of them…. but they’re not easy questions. What I definitely know is that there is much more here than you can see, you also need to feel it.

I hope I’m a better version of myself for at least understanding that much.

>> More info about Jarramali Rock Art Tours
Time Travel Turtle was a guest of Tourism Tropical North Queensland but the opinions, over-written descriptions and bad jokes are his own.