It’s hard to imagine that this was once just a small castle surrounded by a moat.

That was 1385 and it’s all that was needed at the time – and all that was possible. But as the Wittelsbach dynasty became wealthier and more powerful, its home did too.

The Wittelsbachs were the rulers of Bavaria from 1180 until 1918. Some of the family’s members would become German Emperors, while others married into other royal families of Europe.

They were one of the oldest and richest families in this part of the continent. They spent that wealth… but they also had to defend themselves against their enemies. And so, today, the Munich Residence is a sprawling compound that blends the fortifications of a castle with the grandeur of a palace. It has centuries of additions and modifications, managing to also be a museum, theatre, and treasury.

The Munich Residence shows the particular interests of the various rulers and also has influences from some of history’s most important art periods – Renaissance, Baroque, Rococo and Neoclassicism.

It stuns with both its scale and its detail. 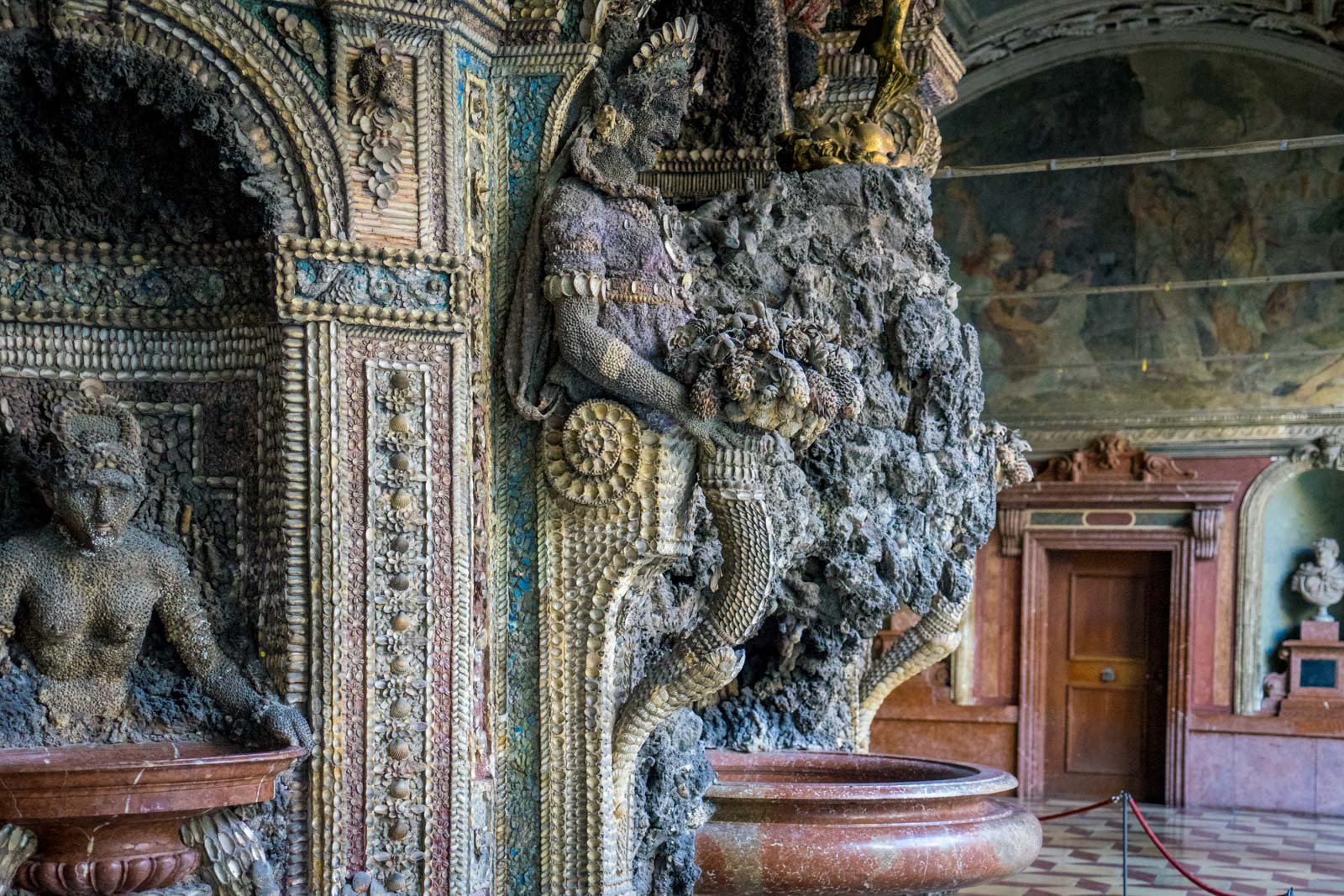 I think it’s one of the highlights of a visit to Munich and you should definitely try to see it for yourself.

One of the first rooms I see when I go in is the Antiquarium, or Hall of Antiquities. This long corridor-style gallery has to be one of the most impressive spots of the Munich Residence.

It was built in 1568 to hold a collection of antiques but was later turned into a banqueting hall (along with other uses over the years). 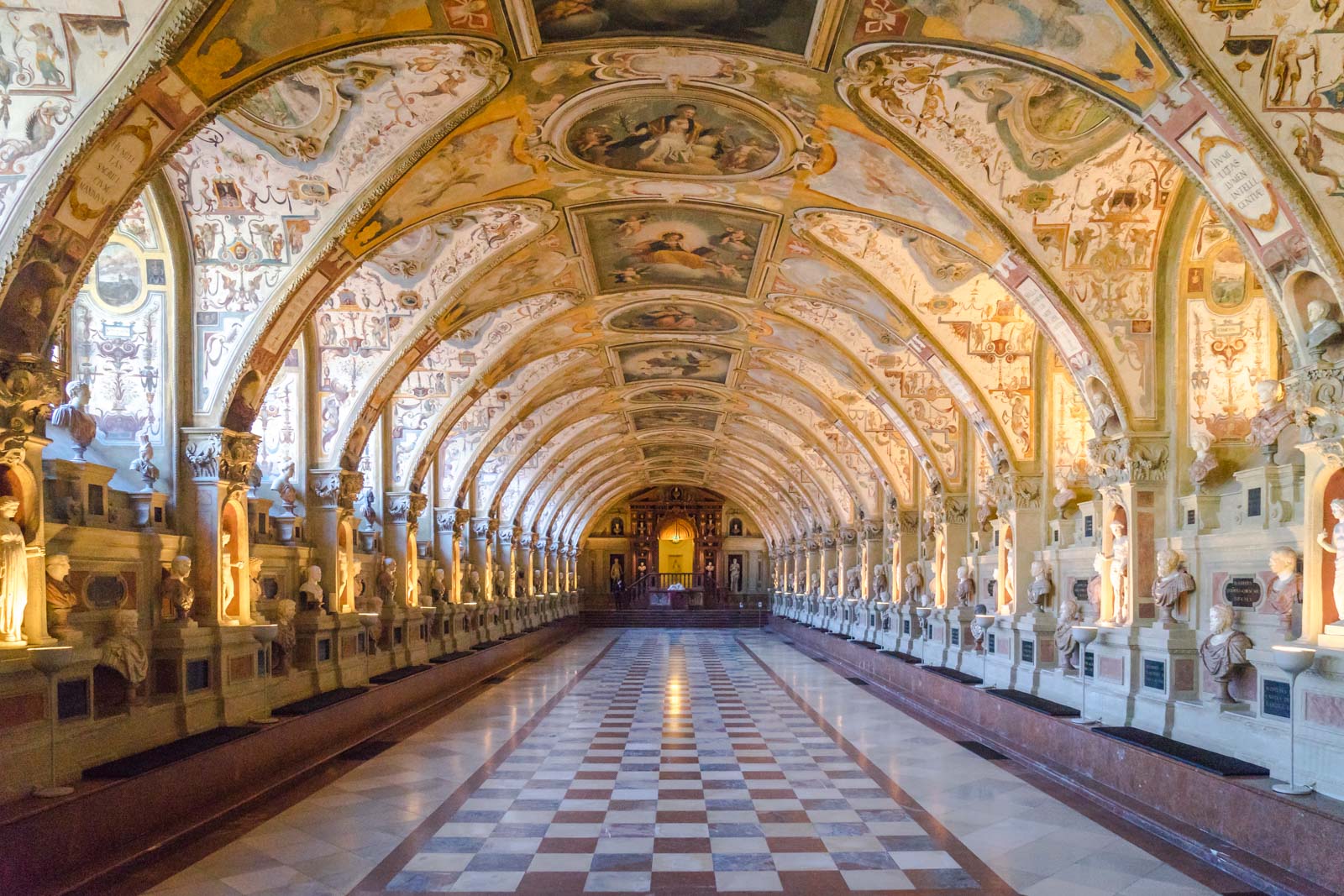 I love the idea of having a banquet in here. As I look around, there is art in every direction, surrounded by golden colours, with marbled busts staring at me and the square tiles on the floor stretching out the perspective.

Imagine sitting for hours, eating and drinking, with all of this as your backdrop. As I continue further into the Munich Residence, I discover even more amazing design and decadent decoration. There are the enormous halls for receiving visitors, the salons for entertaining, and the more intimate private bedrooms. Sometimes a room gives off an impression of elegant sophistication. Sometimes it almost seems cluttered, there is so much decoration in it.

Do the chandeliers distract from the dozens of paintings or do the bright green walls do that anyway?

How much gold is too much gold? 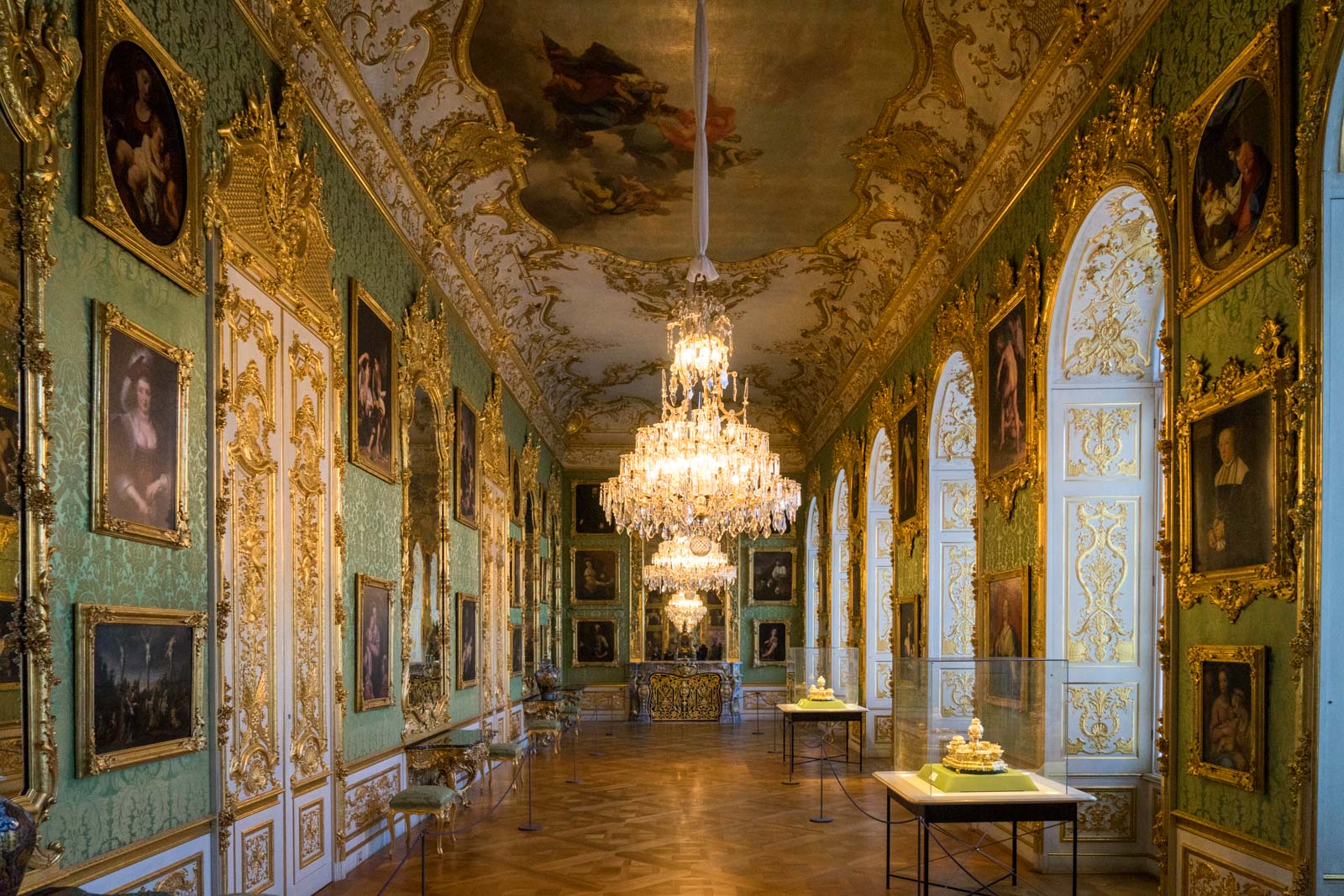 The Munich Residence might not have the fairytale allure of another Bavarian gem, the Neuschwanstein Castle, and it might not have the position of those at Potsdam or Ludwigsburg, but trust me when I say this is one of the country’s most important royal sites. Not only is it the largest city palace in Germany, it was the heart of this economic powerhouse of a region for more than 700 years.

The collections it holds within it are priceless, even before you begin to consider the treasure of the buildings themselves.

Besides exploring the Munich Residence yourself, there are a few different ways to experience the site. Perhaps one of these options interests you:

Doing something with a guide will certainly give you a much deeper insight.

For now, I’ll leave you with some more of my photos of the Munich Residence.

If you’re interested in visiting, I have some practical information for you at the end. 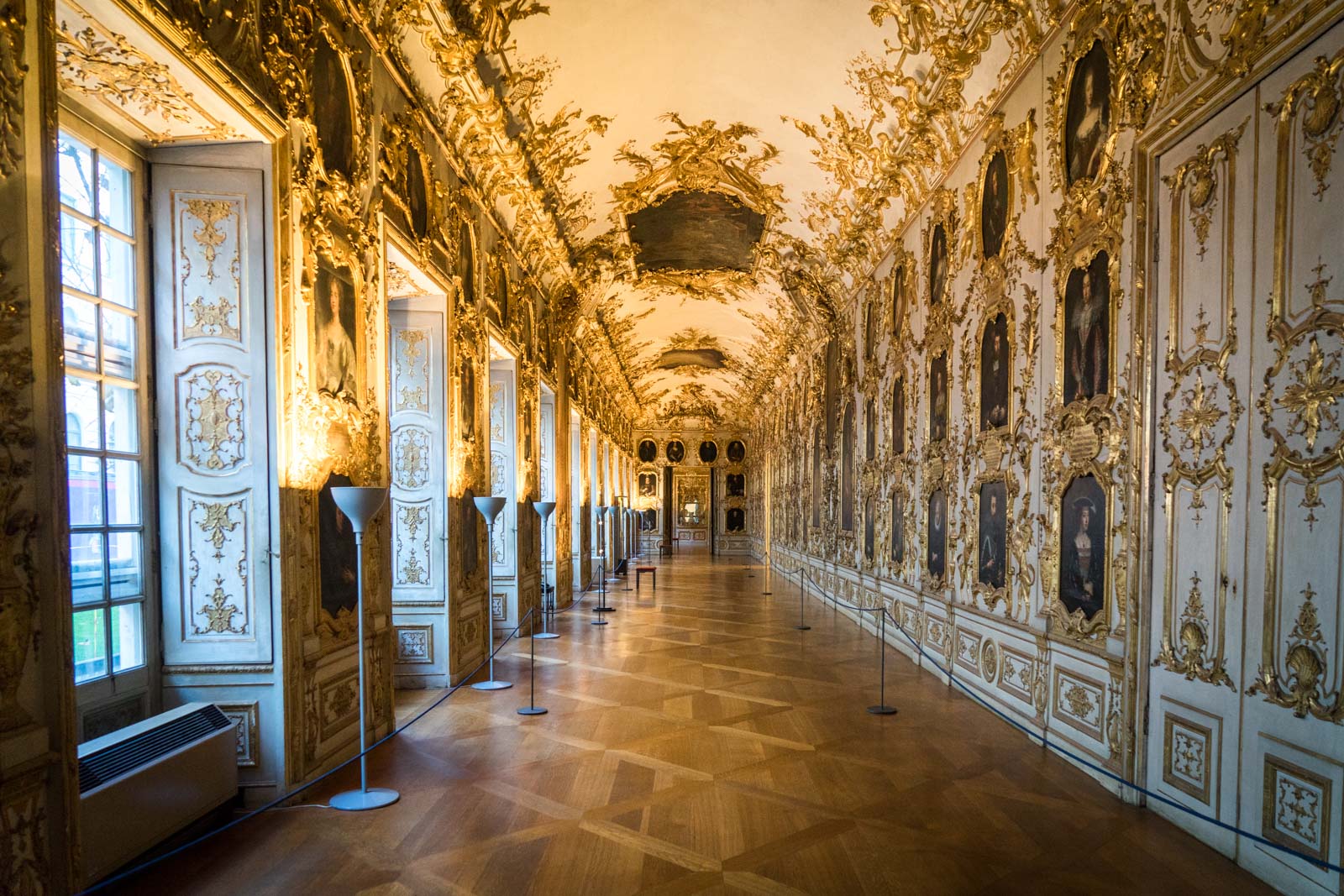 The Munich Residence is located at:
Residenzstraße 1, 80333 München, Germany.
You can see it on a map here.
The easiest way to get to the Munich Residence is with the city's public transport. If you use either the S-Bahn or the U-Bahn, the closest stop will be Marienplatz.
The museum at the Munich Residence is open:
April-15 October: every day from 0900 - 1800 (last entry at 1700).
16 October-March: every day from 1000 - 1700 (last entry at 1600).
An entrance ticket for either the Residence Museum or the Treasury is €7 for adults and €6 for a concession. However, you can get a combined ticket for both for €11 for adults and €9 for a concession.
There are no regular guided tours but you will be offered a free audioguide that you can use through the museum.
If you're interested in learning more about Munich from a local, I would definitely suggest this guided tour of the Old Town.
For a good budget option, I would suggest the Microverse Hostel near the city centre.
For an affordable hotel, Hotel Amba is right next to the main train station.
If you're looking for a trendy design hotel, I would suggest Cortiina Hotel.
And to splurge, you can't go past the magnificent Beyond by Geisel and its fantastic location.