Just one week into my trip to see all of Germany’s World Heritage Sites, UNESCO went and added another one. What are the chances?

The international organisation only adds new ones once a year and only about 20 at a time (26 in 2014). It was just my luck that they chose one in the country I was travelling in at the time.

At first, I was a bit annoyed. The challenge already involved seeing 38 sites in just 30 days and now I had to squeeze another one in.

In hindsight, though, I’m glad this happened. Otherwise I would never have gone to the Carolingian Westwork and Civitas Corvey. The site is in the centre of Germany – not near anything in particular, although the nearest main city is Hanover, about 100 kilometres away. The rural setting is part of the beauty of the place, though.

Although it played a critical role in the spread of Christianity in Europe, it remained geographically separate from the grand cities of the continent and their large religious constructions which often were to show off power more than faith.

The work of the Civitas Corvey was focused purely on theology. 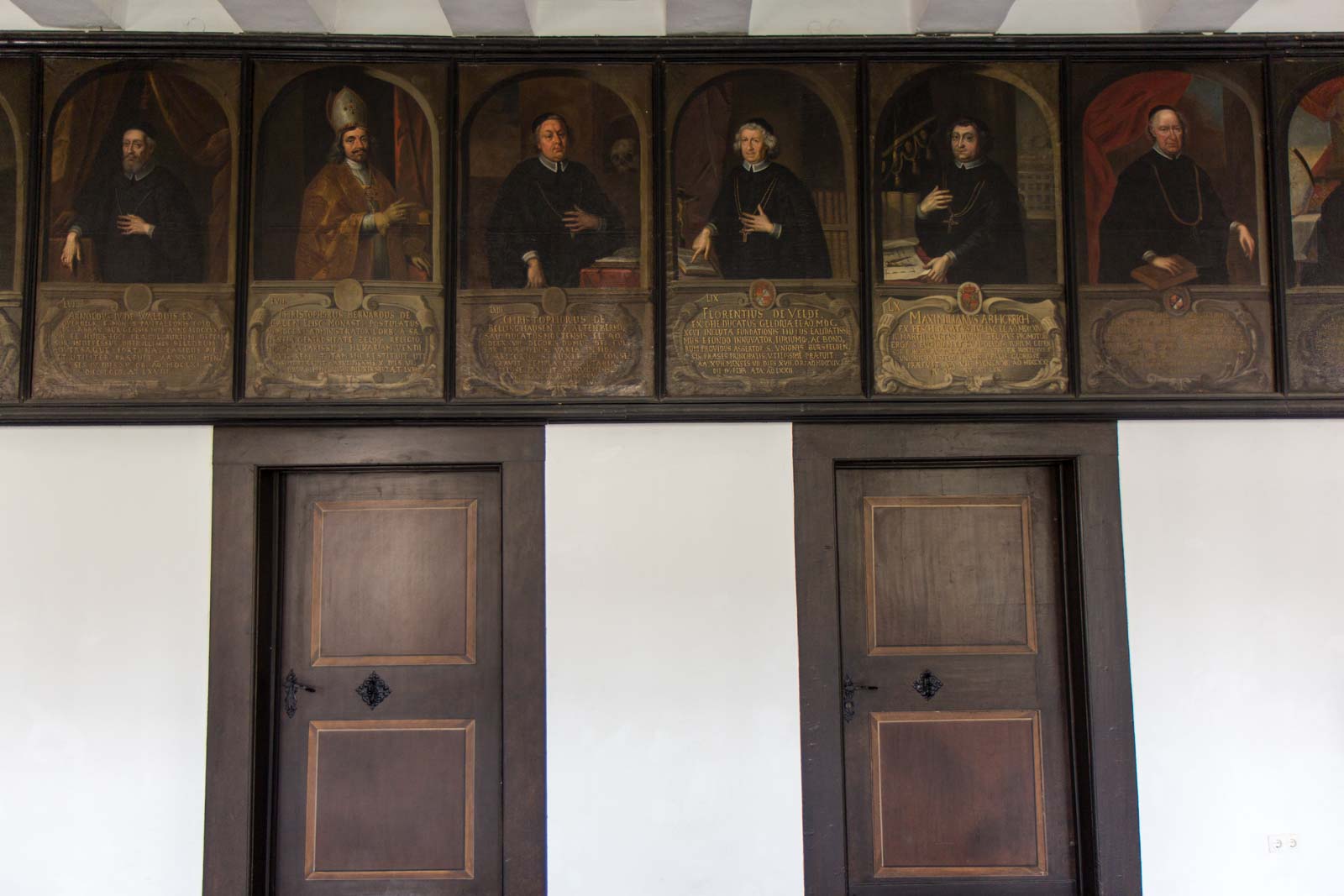 The westwork – the monumental entrance to the church – here is the only standing structure in the world that is left from the Carolingian Empire. While this particular empire is not that well known by this name, it is hugely important in the history of Europe.

The Carolingian Empire covered much of Western Europe in the 9th century and would be the genesis for the creation of the kingdoms of France and Germany. 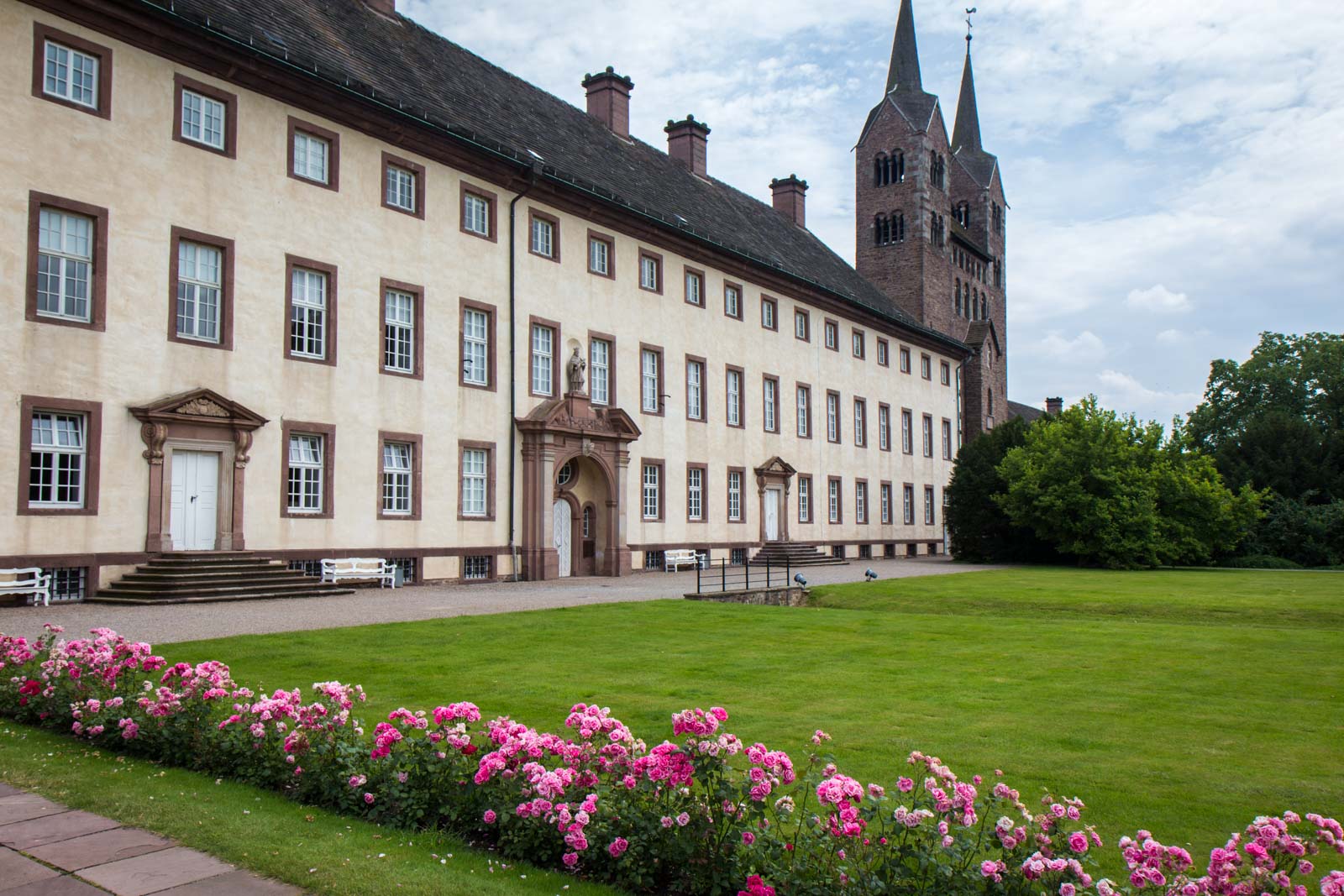 So what exactly is the site itself? A good question and one that I couldn’t really answer before I arrived.

It’s obviously not a popular tourist spot and the name is a bit confusing. So let me try to describe it for you myself. 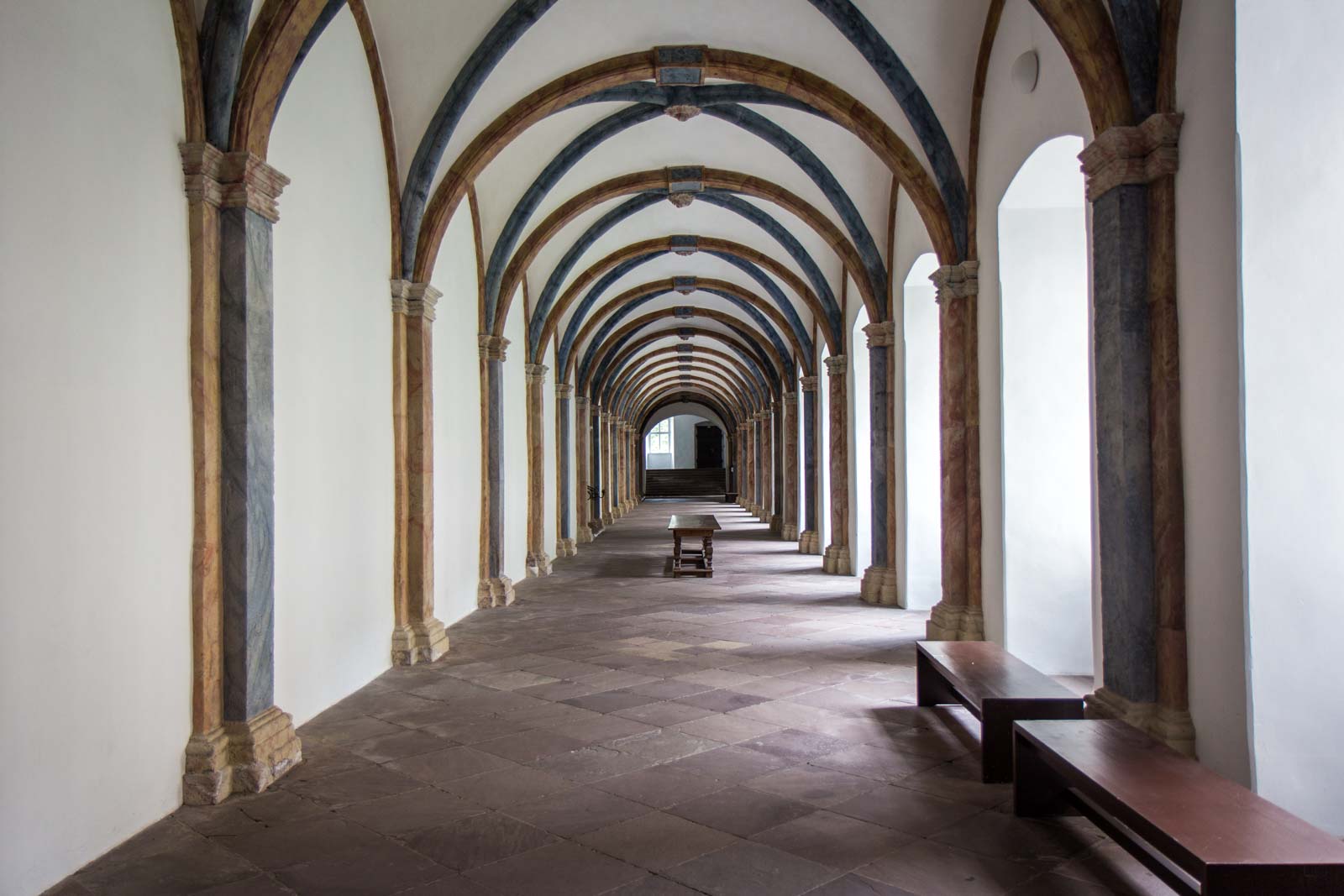 There are two main sections. The first is the church, which has the important westwork as its entrance on the western side.

Inside, it is small but beautiful. It also has a deep history and people have worshipped on this site for nearly 1200 years.

It is a rather understated for such a significant house of worship – relics went from here to churches all across Europe as the Christian faith was taken to the people of the north. 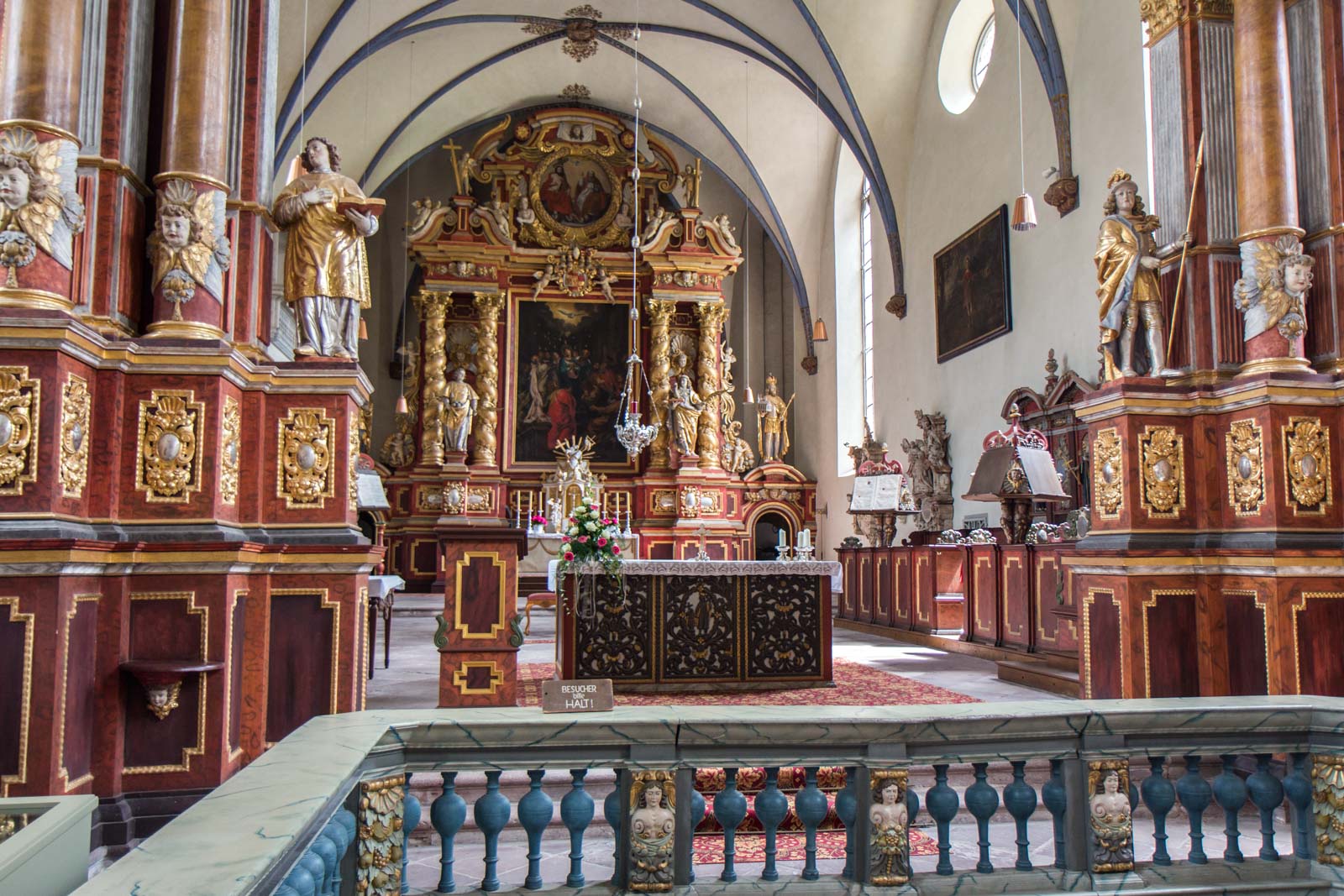 The second section of Corvey is much larger and more impressive in its grandeur. It is made up of the multi-levelled monastery building that holds many treasures and is a piece of art in itself.

There’s a slight contradiction in the rooms here. While some are rather plain and reflect the purity of the pious men, there are also elaborately decorated and furnished rooms.

This is because, during the course of history, the building was used to host German emperors and kings because of its significant political position. 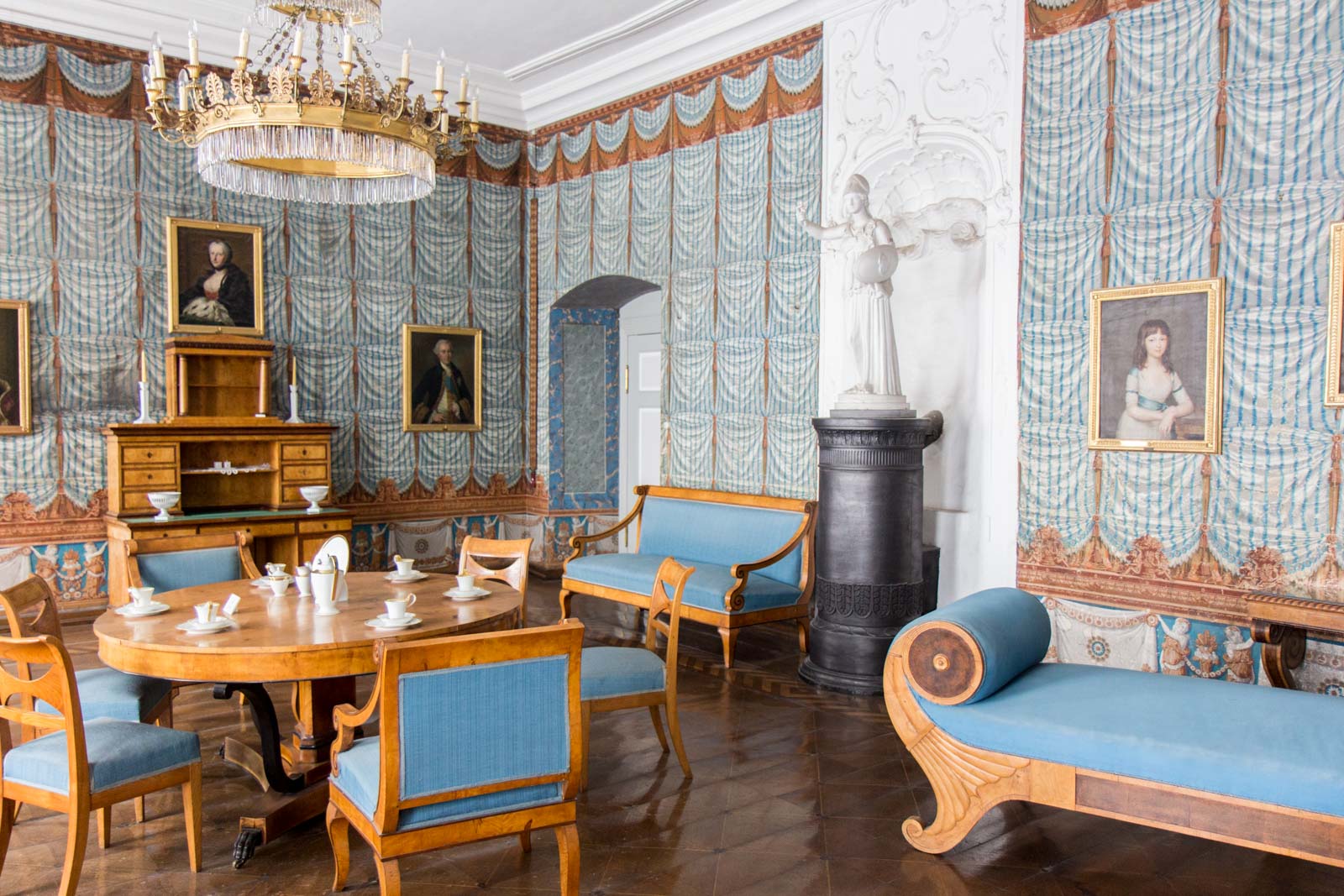 It is possible to see the church and the monastery buildings on your own, although there are also guided tours offered.

The church is quite small and doesn’t take too long to see. The other parts of the building are quite expansive, though, and there is a fair amount to see. One of the highlights of the visit is the incredible library that has more than 74,000 books in it. It is one of the largest and most valuable private collections of books in Germany.

The library is made up of 15 different connected rooms and has 200 different bookcases. Interestingly, it has a decent collection of fictions, travel books and even romance novels!

The Carolingian Westwork and Civitas Corvey is located at:
Schloss Corvey, 37671, Höxter, Germany.
You can see it on a map here.

The Corvey site is open at the following times:
1st April – 1st November: 1000 – 1800
The rest of the year, it is closed.
Entry to the church and the monastery buildings costs €6 for an adult.
A concessions entry ticket costs €2.50.
To get to the Corvey site, catch the train to Höxter and then either walk or take a taxi for about 2 kilometres.
There is not much accommodation near the site but there are enough options for a night.
If you're looking for something budget, you're probably best off with Gästehaus am Räuschenberg.
For something a bit more upmarket, have a look at Ringhotel Niedersachsen
Item copy
If you’re travelling to the site by public transport, it can be a little tricky so make sure you leave yourself enough time to see the buildings properly.” id=6]
You can find out more information at the official website for the Corvey site.