* Photography was not allowed so all images are courtesy of http://angolarodeo.com/

A maximum security prison in the economically-depressed and socially-repressed part of Louisiana is not the sort of place you should want to end up. But it was exactly where we were heading.

We were going to go past the guards, through the fence and into the world of hardened criminals, into the biggest male maximum security prison in the Unites States.

Each weekend in October, the Louisiana State Penitentiary in Angola puts on a rodeo within its prison grounds. It’s not your ordinary rodeo, though.

In this one all the competitors are prison inmates and the rules of normal society don’t exist. Take for instance the event (my favourite) called ‘inmate poker’.

Four prisoners sit at a poker table that’s been placed into the dirt of the bullring. Then, without warning, a bull is released and the last person still sitting wins.

I’d been warned about this event and I expected to see prisoners running around the ground, being chased by a raging bull. What I hadn’t considered was that these guys are tough. 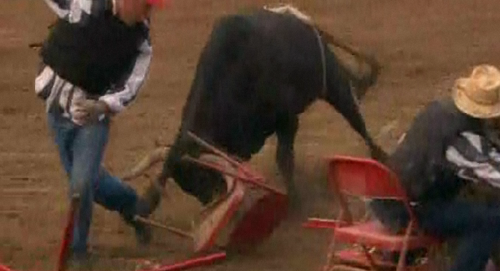 Some are the toughest of the tough and they’ve all been locked away because they’re considered a danger to society. So to them a bull is not something to fear – they’ve faced much worse in their criminal worlds.

So, you know what they do when the bull is released? They sit there without a flinch and let it smash into them, throwing them up in the air with its horns, kicking with its feet and charging with its bulk. 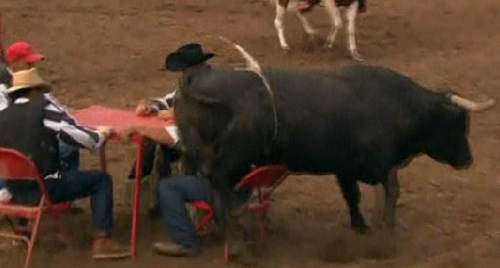 There are some aspects of the rodeo that feel like any other. Families come along with their children and they sit in the stands clapping and cheering; there are food and drink stalls surrounding the arena; and there is a sense of friendly competition about the challenges.

Then there are some aspects of the rodeo that feel very different.

And although the competition seems friendly there are occasional explosions of anger – and no one likes a large angry prisoner. 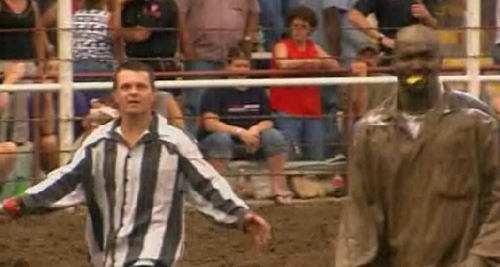 Many of the other events in the rodeo are the standard ones. The final one is not.

In this event, all the competing inmates stand out in the bullring and then the angriest and biggest bull available is released. It has a poker chip stuck to the front of his head, between the horns, and the winner is the prisoner who manages to get the chip in his hand.

This is not a safe game. This is a game where you are trying to get close to the horns of a bull, horns that would kill you if they sliced into your body.

But the men don’t care because there is $500 prize money on offer for the winner. 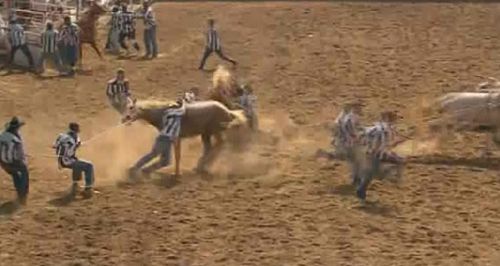 What about the prison inmates?

And this is the point where the morals of the event become a bit blurred. The inmates volunteer for the rodeo and it’s apparently quite a source of pride to be chosen to compete and to then do well in the events.

But they’re not given any proper training on how to handle the wild animals that charge towards them.

They are basically put into life-threatening situations in the name of entertainment, and they accept the conditions because they have little to lose, locked up for the rest of their lives, and the idea of a few hundred dollars makes the risks seem worthwhile. 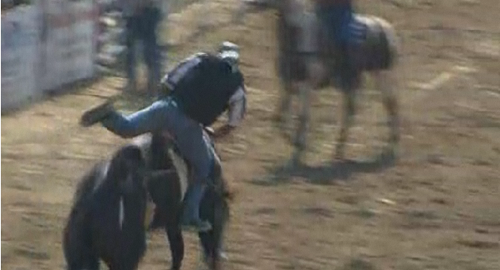 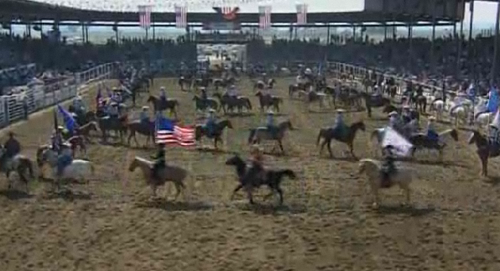 Meanwhile, the prison itself reportedly earns almost half a million dollars for each day that the rodeo is on. That money comes from admission tickets, food and drink and profit from the furniture and crafts that prisoners sell in the market just outside the rodeo arena.

I said at the beginning of this story that we went for a bit of a laugh and that was definitely the initial attitude. But after watching the event, I actually think it was a little sad.

The ten thousand spectators cheer and laugh, they eat hamburgers, they drink soda and, most importantly, they go home to their families at the end of the show.

The prisoners risk their lives and then go back to their cold and lonely cell. They presumably deserve to be in prison but you can’t help wonder whether they’re being exploited by their guardians for the sake of a profit.

I have to admit, though, I did laugh. It was an amazing experience.